As the door closes behind me, I adjust my helmet and goggles and consider the options: crowbar, baseball bat, or sledgehammer? Before me is a roomful of furniture and household objects that I have half an hour to smash to pieces—and the clock is ticking. 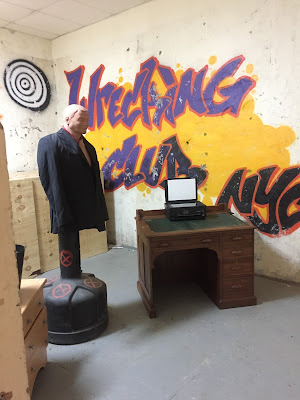 I’m at the Wrecking Club, a new business in the basement of an anonymous Garment District building, where you can spend thirty exhilarating and exhausting minutes destroying stuff. The room, for up to two people, costs $20, and the items—from a bucket of glassware to a computer to a desk—cost an average of $20 each; you can also bring objects from home that could use some therapeutic destruction. Each session includes protective gear (helmet, ear plugs, goggles, dust mask, optional coveralls), implements, access to a sound system, and cleanup, as well as a courtesy mannequin for beating, if the mood strikes. A typical setup, around $100, includes a large and a small piece of furniture, assorted housewares, and an electronic device. Each item creates a different tactile sensation when hit, from the shattering of plates to the crunch of plastic to the splintering of wood. Each implement has a different effect: the baseball bat beats, the sledgehammer smashes, the crowbar digs in. The room’s graffitied walls make an artfully grungy backdrop for photo ops. But from the outside of the building, the only sign that demolition lurks within is a cluster of Dumpsters on the curb filled with carnage from recent wreckings. 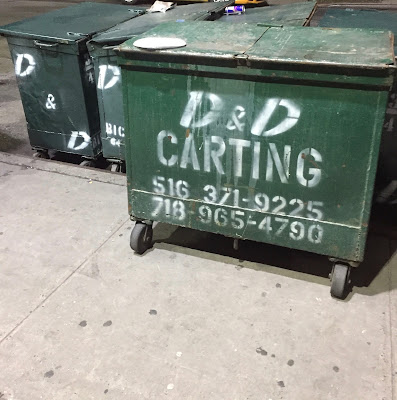 Owner Tom Daly, a former financial analyst, founded the Wrecking Club in early 2017, when he realized there was an unmet need for a safe, no-holds-barred place where New Yorkers could go to break things, release energy, and have fun. The Wrecking Club is the only business of its kind in the city (though there are several similar businesses around the country and the world). Daly was inspired by the adrenaline rush he always got from smashing stuff to throw away. “Aside from the fact that I’d always wanted to start my own business, this was something fun, weird, and I’d get to do it all day long,” he told me. 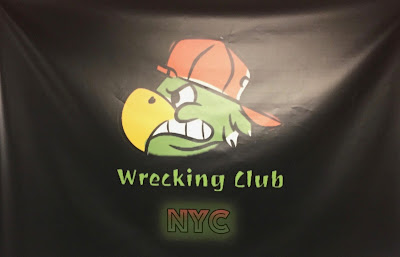 “Aggression isn’t something you’re encouraged to express—it’s a taboo thing,” he adds. Needless to say, customers have to sign a waiver acknowledging risks that range from flying debris and collision with fixed objects to hearing loss and “emotional injuries”—though no one has been hurt so far and most clients handle themselves responsibly. At five foot six, in a backward baseball cap and hoodie, Tom acknowledges he doesn’t make for much of a bouncer; he gives customers their privacy but keeps an eye on things via closed-circuit cameras. He’s vague about his material sources (“Let’s call it treasure hunting”), but his goal is to find things that are aesthetically normal but dysfunctional. 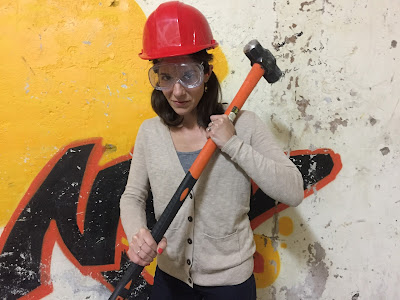 A friend and I visit the Wrecking Club one recent weekday night; we are the only customers, though it’s often booked weeks in advance. Daly says the typical customer is raring to go, but I guess we seem a little intimidated: “You guys don’t look like my usual clients,” he observes, giving us the once-over. The violence required here feels unlawful; I am someone who plays by the rules. Also, I’m surprised to feel a rush of pity for the items in the room. (When I ask Daly if he ever anthropomorphizes the objects, he pauses, then says, “I can honestly say that thought has never crossed my mind.”) I pick up a sledgehammer and swat tentatively at a chair. It skitters across the floor with each blow, and it’s hard to connect with the spindly rails. The seat, however, splits neatly in two with a crack, and I feel my first rush of satisfaction. 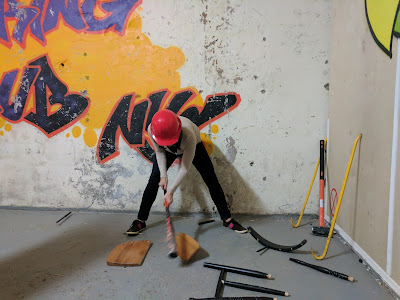 Decidedly more tantalizing is a multifunction printer. The initial bash through the plastic casing leads to depths of glass and finally to the groan of the innards splitting apart. Ink cartridges and electronic components sail into the air and scatter around the room in a spray of destruction. The noise is deafening. After about two minutes, the machine is in shards and I am panting. I hurl my sweater into a corner. 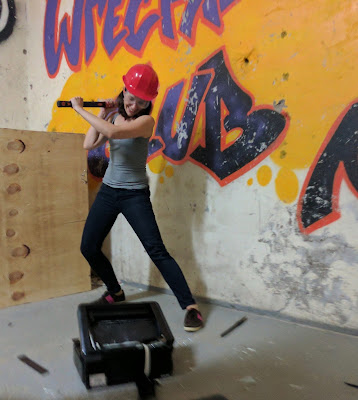 Finally getting into the spirit, I decide to take a baseball bat to the dummy, whose battered face has the most despairing expression I’ve ever seen on a rubber human. 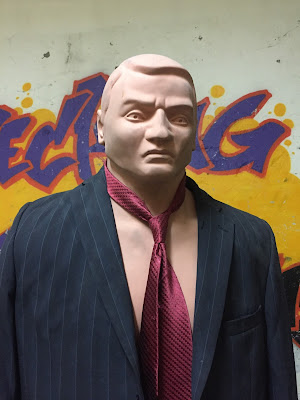 I swing, and he bends obligingly on his pole; his pinstriped jacket slides off, and he bounces back in the nude for another hit. 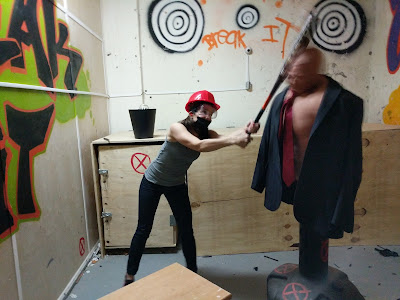 There’s a knock at the door: Daly tells me to put my sweater back on for protection to protect my forearms (all participants are required to wear long sleeves and pants). Sweating profusely now and out of breath, I decide to tackle the bureau. As I punch the sledgehammer through the cheap wood into the hollow drawer, I feel like I’m quenching a thirst I didn’t know I had. 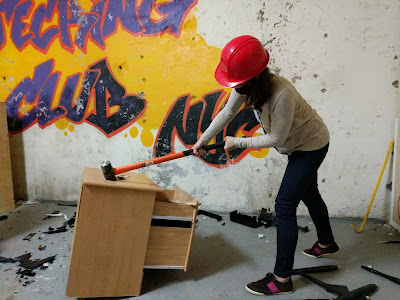 Crouching down and surveying the havoc I’ve wrought, I realize that the Wrecking Room satisfies a primal human urge: the desire to have a direct impact—on people, on objects, on anything—and how rare that opportunity is in modern urban life, mediated by technology and social norms. As Daly tells me, the Wrecking Club is not so much about releasing anger as about unleashing the tension and inhibitions that we don’t even know we have—that is, until someone gives us a crowbar and permission. 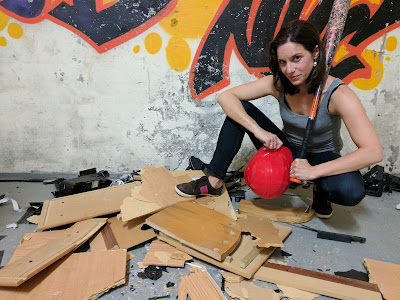 Daly says that after a few smashes, the first sound to come out of a wrecking room is usually laughter. Maybe the brute physical connection forges human connections. And maybe all this destruction creates something that will last, at least for an evening.

For more information, visit The Wrecking Club. Many thanks to my friend and wrecking companion Michael Hsu, who took most of the photographs for this post.