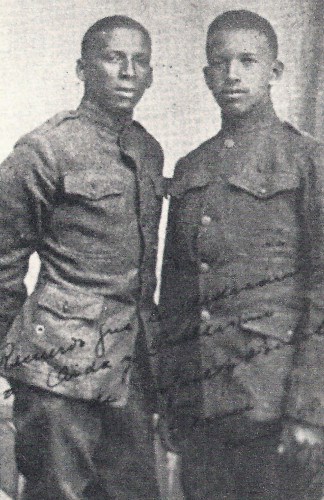 DIGITIZING AND DISSEMINATING THEIR MUSICAL LEGACY

The 369th Regiment known as the Harlem Hellfighters became famous during World War I not only for their courage on the battlefield, but for 369th Regimental Army Band. They were an all-Black band in the segregated army led by James Reese Europe, who many credit as helping to initiate the Harlem Renaissance. The band, which recruited up to a third of their members from Puerto Rico, introduced European audiences, particularly in France, to live jazz music and influenced the careers of notable musicians including Latin music’s greatest composer Rafael Hernandez as well as jazz greats Noble Sissle, Charles “Lucky” Roberts, and Frances Eugene Mikall as well as jazz greats Noble Sissle and Charles “Lucky” Roberts and composer Frances Eugene Mikall.

City Lore is engaged in a new initiative to digitize and disseminate the music scores and song charts of the 369th Regiment Historical Society for future generations of musicians and the public, and, in the process, tell their important (and in the case of the Puerto Rican musician’s their largely untold) story. This forthcoming digitized collection, which was stored for many years in the basement of the 369th Regiment Armory, will shed light on African American, Latino, and on America’s musical history. It has particular relevance to the history of jazz, African American blues, Latin music, and military marches.

Here are a couple of charts for the song “Memphis Blues” which was a standard of the regimental band.

On the eve of WW I African American bandleader, James Reese Europe, was tasked with forming an all-Black military band. Reed players able to read music and willing to enlist were scarce in New York, but Puerto Rico’s tradition of municipal bands with trained musicians of African-American ancestry enticed Europe to the Island where he recruited 18 Afro-Puerto Ricans for the regiment. The many municipal bands that played throughout the island were made up of some of the finest of the island’s musicians who could play various instruments. Subsequently a third of the regimental band was comprised of Afro-Puerto Ricans, who would not only to leave their mark during their military service, but some would settle in New York after the war, changing Latin music forever; among the many distinguished musicians was one who would become an internationally celebrated composer, Rafael Hernández.

The importance of the Harlem Hellfighters Marching Band collection goes far beyond the relevance to the Latino community. Due to the regimental band’s success, bands with Black musicians became a regular feature on Broadway. James Reese Europe was a precursor not only of the Harlem Renaissance but of jazz greats Duke Ellington and Juan Tizol (the valve trombonist and composer in Ellington’s band who wrote such jazz standards as, “Caravan” and “Perdido.”).

Author’s note: Though Bill “Bojangles” Robinson claimed to be in the 369th Regiment and various documents assert this, he actually was not in the regiment.  Like many other Harlem luminaries who were friends with James Reese Europe, he supported the regiment in the early days and later played a member of the regiment in the 1943 film, Stormy Weather.