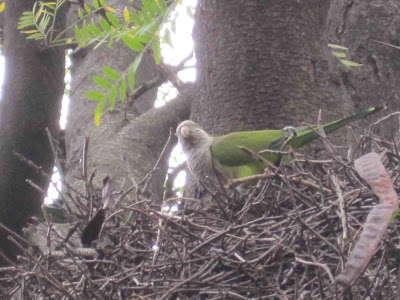 One recent Saturday morning, twelve people gathered outside the gates of Brooklyn College, in Flatbush. Some carried coffee cups. Some carried cameras with telephoto lenses. Others carried bags of millet. Wild parrots, they had been told, love millet, and the wild parrots of Brooklyn were what they hoped to see. 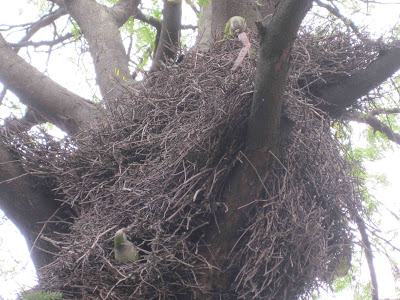 So what are tropical birds doing in Brooklyn? In the 1960s and ’70s, parrots became popular household pets in the United States. Quaker parrots (also called monk parrots) were imported from South America to meet this trend. It is believed that a number escaped from their crates on their way through JFK Airport, flew away, and landed in Flatbush, Brooklyn, where they found the temperate climate to their liking, as well as plenty of twigs for their several-hundred-pound nests, and the stadium lights of the college sports fields in which to build them. They began families, and they decided to stay. Today, a Brooklynite named Stephen C. Baldwin, who is fascinated by the birds’ presence in his borough, leads regular, free “wild Brooklyn parrot safaris.” 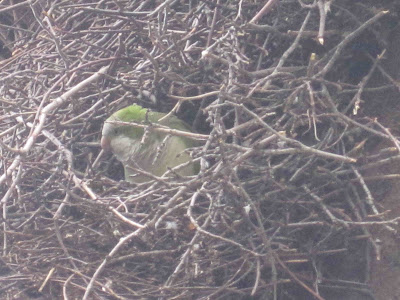 On this Saturday, the first sign of the parrots was their song, which alternated between prrree! and prrrah!: a hoarse, squeaky twitter, rather like a plastic doll being squeezed repeatedly. We looked up toward the sound and saw the parrots flitting in and out of masses of twigs mounded in the stadium lights. It was a brisk day, and the dense nests maintain the birds’ native temperature. 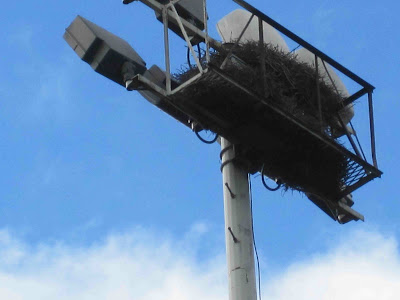 We passed by a pocket park whose fence had been adorned with metal parrot silhouettes. Then we cut through a suburban enclave to a tree that was home to an enormous parrot nest about five feet overhead; Steve swore us to secrecy about its location. We heard a racket of cackling as we approached, and, once we were beneath the tree, contented chuckling and a faint clattering of twigs as the parrots worked on their nest, deftly snapping branches with their beaks and rearranging them in the structure. Bursts of green feathers darted among the branches, and orange beaks and bright wings poked out of cavelike holes in the sides of the nest. The parrots, seen closer, are smaller than pigeons, with light green hoods and darker green wings. 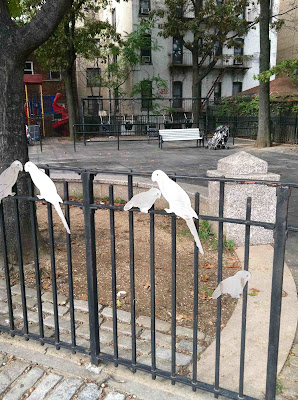 The safari group twisted their telephoto lenses up into the tree, scattered their millet on the sidewalk, circled the tree like so many eager cats as cars whished by, a jackhammer thundered in the distance, and a wind chime on a neighboring house tinkled in the breeze.

0 thoughts on “SOUND: The wild parrots of Flatbush, Brooklyn”