Though Marino’s Italian Ice carts are perhaps the most ubiquitous New York summertime sidewalk sight, I can never help feeling that some essence of refreshment is lost when the ice is scooped from a tub. To experience a true icy sensation, you have to find an authentic Puerto Rican piragua cart, where the ice is shaved fresh from a brick and then doused with syrup. I’ve spent the past two months of summer hoping to come across one in my travels around the city, and spotted my first cart just a few days ago, in Ditmas Park, Brooklyn. 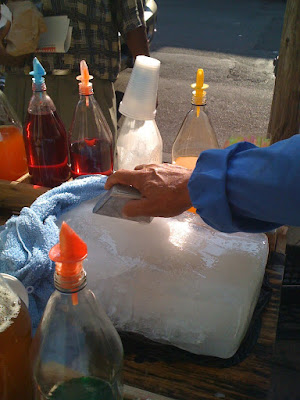 The cart was parked on the corner of Church Avenue and East Seventeenth Street, distinguished from its two neighboring food vendors by a green-and-white-striped umbrella and rows of colorful glass bottles ringing the cart’s edges: green, orange, red, yellow. The vendor, who spoke little English, wore a Yankee cap over his white hair, and smiled from beneath a mustache as white and fluffy as the shaved ice itself. I asked a waiting customer what her favorite flavor was, and she pointed toward a bottle of creamy syrup: vanilla. 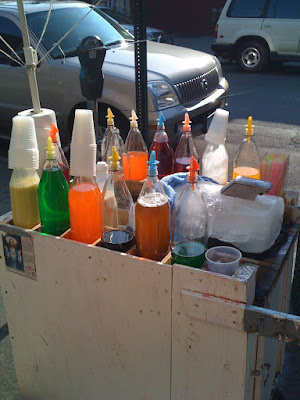 The vendor picked up a metal scoop, removed a damp blue towel from the ice block, and began scraping at the surface with brisk strokes. The scoop made a rasp, shuffle, shuffle sound as the ice softened beneath its edge, not unlike someone shoveling their walkway on a snowy winter day, and immediately I felt a few degrees cooler. Once enough ice shavings had collected in the scoop’s pocket, he tapped them into a soft plastic cup and tamped down on the mound at the top with a paper cone, creating a pyramid. (I later learned that the word piragua comes from agua and piramide.) He shook a few squirts of vanilla syrup onto the point of the cone, and it melted a path through the ice flakes, tainting them yellow. Then he dribbled the top with sweetened condensed milk, which solidified in a few shiny squiggles, and impaled the whole concoction with a bright pink straw. 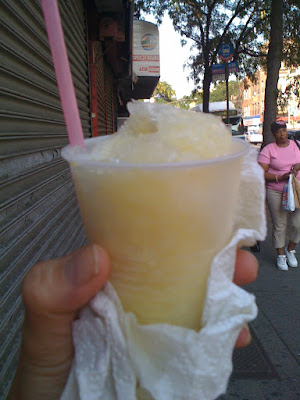 As soon as he pressed the cup into my hand, I felt the cold seep through the thin plastic. The ice at the bottom of the cup began to melt beneath my grip. The custardy vanilla pooled at the bottom rushed up the straw, whose diameter was thin enough to admit only the purest rush of cold flavor and no bland, chewy flakes of ice. Once I’d drained the dregs, I impaled the straw in a fresh spot, chipping at the surface and then plunging it through the icy shards with a crisp rustle. Like the summer day itself, this treat, its crunch and slow flavor trickle, became something new in each moment beneath the beating sidewalk sun.