One recent winter afternoon, I found myself standing in my slippers on the sidewalk outside Happy House Seafood Restaurant in Sunset Park, Brooklyn. As shoppers hustled by, some glanced curiously at my slippered feet, and then at the Chinese man crouched before me, with my shoes in his hands. 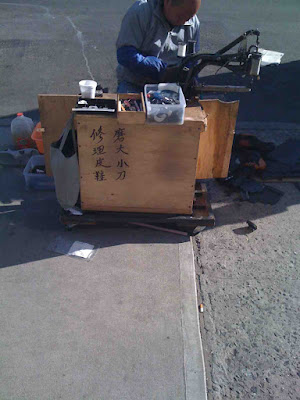 As it turned out, I hadn’t needed to bring my slippers, after all: as a sidewalk cobbler, he provided a pair of courtesy rubber sandals, as well as a plastic stool to sit on, emblazoned with the words “Moon River Spice” and a cartoon woodland scene. His cobbler’s setup was simple and portable: a wooden cart, about two feet by four feet, containing a tiny hand-cranked sewing machine, a magnet with pins stuck to it, a hammer, an iron shoe tree, a few baby-food jars of shoe tacks and spare shoe parts, and a bench to sit on made of two-by-fours held together with old shoelaces.

When I first spoke to him, he had tapped his ears and furrowed his brow, apparently to indicate that he was hard of hearing, but we managed to communicate nevertheless. I handed him my boots and gestured to the worn-down heels; he slipped the boots onto his shoe tree and, amid the thronging horns of delivery trucks and the chatter of passersby, pried off the existing heel, plucked a piece of black rubber from his bench, traced the outline of my boot’s heel on the rubber with a pencil stub, sliced it out with a pocketknife, and tap-tap-tapped it into place. Then came the most satisfying part, as he turned my boot in his hand while holding a file to the edge of the sole, and a shaving of black rubber curled away from the heel beneath his thumb. Then he sanded down the edges with an equally satisfying rubbery rasping sound, leaving a small pile of black shavings on the sidewalk at his feet. 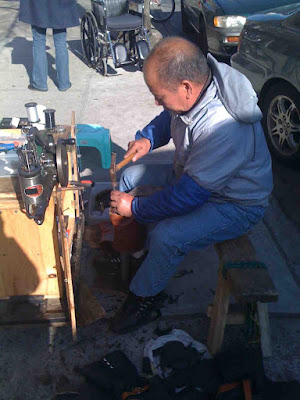 When I asked if he could polish the boots, he rummaged around in his wooden cart and emerged with a metal tube of Chinese shoe polish, nearly flattened, with only a nubbin of brown beneath the crusty cap. Still, he rubbed it into the toes of the boots with a hard old chamois cloth, making a pff-pff-pff sound, and presented the boots to me, one on each fist.

The re-heeling and polish cost five dollars. Admittedly, a month later, the heels had worn down again, and I had to turn the boots over to a more modern cobbler with access to Vibram rubber and a more abundant supply of brown shoe polish. But I’d say the experience was worth every penny, and every time I heard my heels click beneath me on the sidewalk, I thought of his little stand and the sound of his hammer, and smiled.