Whenever the door of 159 Bowery opens, a digital doorbell chimes. And occasionally the ring of Brian Faerman’s cell phone echoes down the rows of cash registers that line the countertops, shelves, and floors of his family’s third-generation shop. 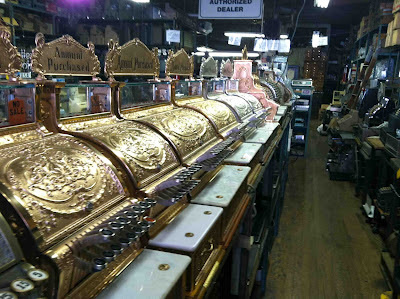 But, of course, this modern music isn’t the reason passersby peer in the window, hesitate, and step inside. It isn’t the reason that Brian Faerman, the store’s middle-aged proprietor, has to prowl the aisles, answering same questions—“What’s your favorite cash register?” “Which is the oldest one here?” “Are these for sale?”—with a combination of good cheer and weary exasperation, while preventing his visitors from spilling their lattes on the old machinery. It isn’t the reason customers swoon over old machines with ornate brass and iron casings, feathered arrows or sinister fingers pointing at numbers frozen in time. And it isn’t the reason that customers bring their cash registers here—or ship them from as far away as Egypt–for the Faermans to repair, often graffitied with stickers and the Sharpied-numbers of coworkers and credit-card companies (which threaten these machines’ very existence). 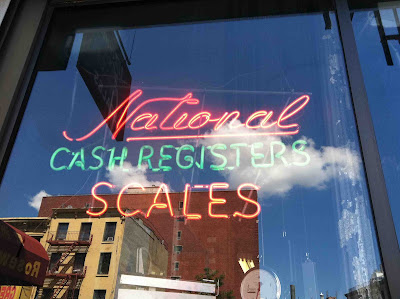 The reason, of course, is that there’s something enchanting about the old-fashioned cash register, and particularly its iconic sound: the ka-ching, which is no match for the digital bleeps that increasingly punctuate our days. Indeed, each ka-ching is a sound of small victory: a transaction completed. With its prelude of whirs and clatters, the ka-ching feels like a victory for the register, too: a final “hurrah” after all the effort of calculation. 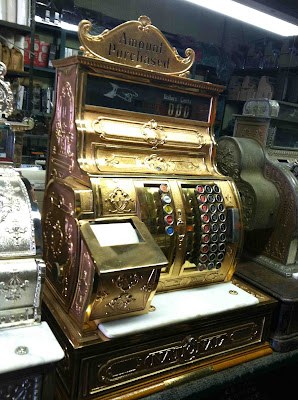 If you’re lucky and kind, Brian might “play” the registers for you, filling the shop with tintinnabulation in the role of a grudging but respectful conductor. After punching the correct sequence of buttons, divoted like typewriter keys for the human finger, the gears rattle as the numbers spin into position, then the drawer springs open with a pop, followed close on the tail by the open-drawer bell: the ka-ching. Some registers’ ka-chings are clean, clear, and crisp, like a bicycle bell; others are lower and more resonant. The newer digital models purr satisfyingly as the printer spits numbers onto a spooling paper receipt. If the registers have two drawers—one till for each salesperson—there’s a different bell for each, not unlike party-line telephones. Sometimes dust puffs out when the drawers open, relics of long-lost transactions.

In the back of the shop, Brian’s father, Bernard, repairs the registers in a denim smock, silently. From a pile of old machinery, Brian extracts a “monster bell” disinterred from a massive old cash register that had multiple drawers. Two sets of nested bells are struck by four clappers, and when Brian rings it, the effect is almost like church bells, the notes cascading. 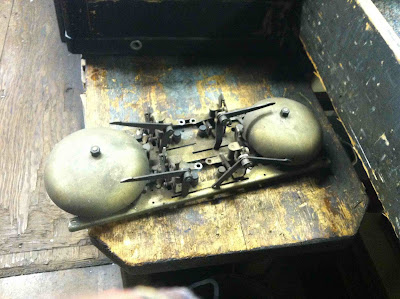 Located on the Bowery and jostled on either side by high-rise condos, low-slung nightclubs, and chandelier stores, Faerman Cash Register Company used to be the center of a sort-of “cash register row”; now it’s pretty much a lone outpost. But the Faerman family owns the building, and Brian insists that they’re not going anywhere. He says people come to believe in “lucky” cash registers if business has done well under their aegis and will keep paying to repair them, like a patched but beloved pair of jeans. It’s hard to imagine a rectangle of plastic that could compete with that. 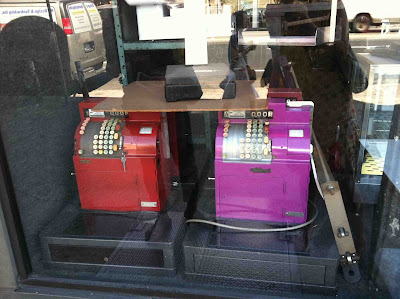