Even during a record-breaking winter, it was a good day for icebreaking: 0 degrees Fahrenheit at 6 a.m. in the town of Hudson, New York, lower with the wind chill. On a bank of the Hudson River, a sound like distant firecrackers echoed through the air. The Sturgeon Bay, a US Coast Guard icebreaker, appeared around a bend, slicing its way through the foot-thick ice. 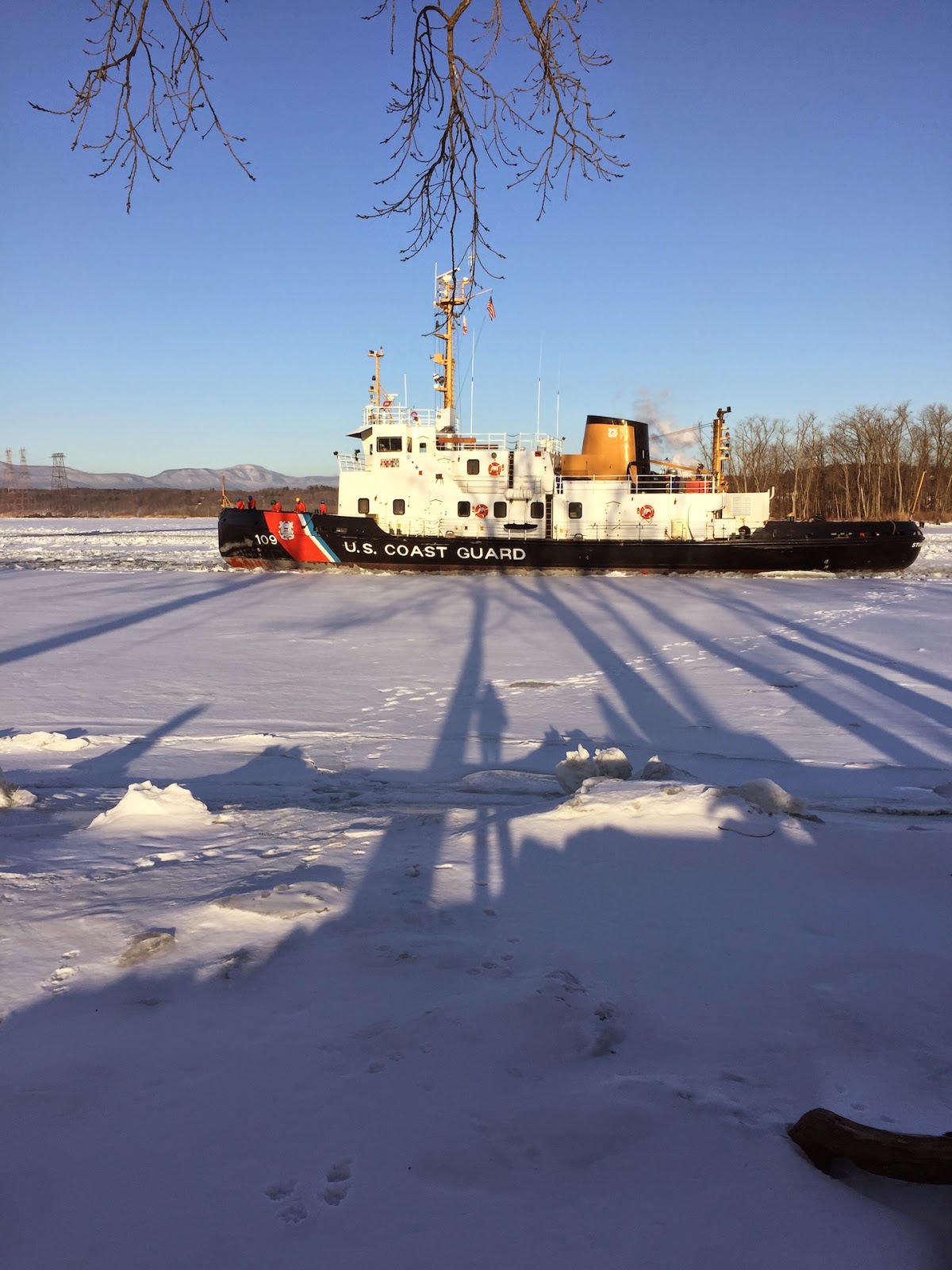 Between mid-December and early April, the Coast Guard keeps at least one of its nine icebreaker tugs on the Hudson at all times. The tugs work the river from the George Washington Bridge to Albany, as ice conditions dictate, creating a shipping channel for barges and freighters. Of particular concern are the seven choke points north of West Point, where bends in the river cause ice flowing downstream to accumulate into plugs. 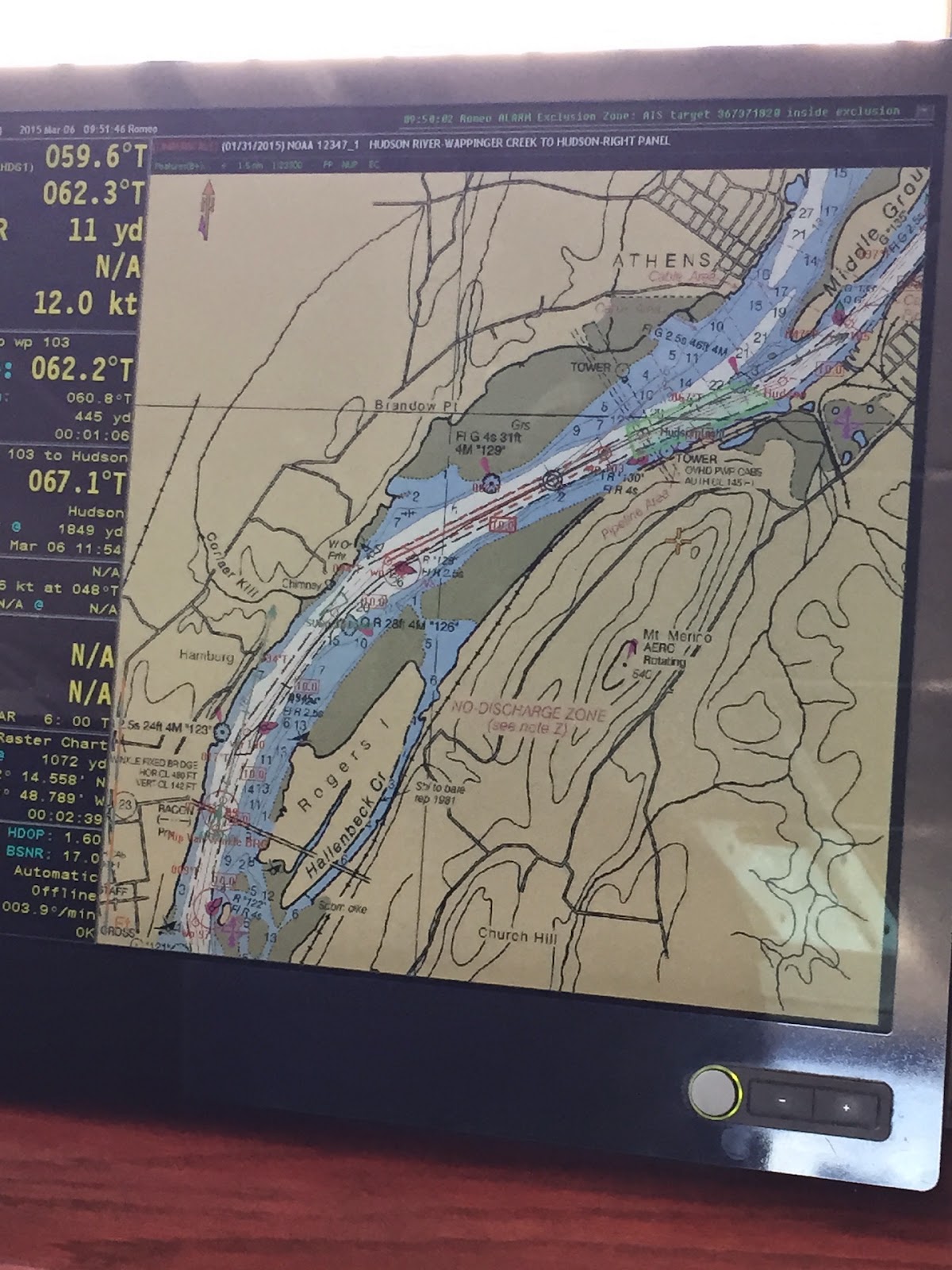 The chunks of broken ice drift south with the current toward New York Harbor and beyond; the floes we see in the city waters may well have originated in Albany.

The channel is essentially a stripe of crushed ice, called “brash,” between fields of thicker “plate” ice that stretch to the shore. Without it, commodities such as home heating oil and road salt would not reach their winter destinations. 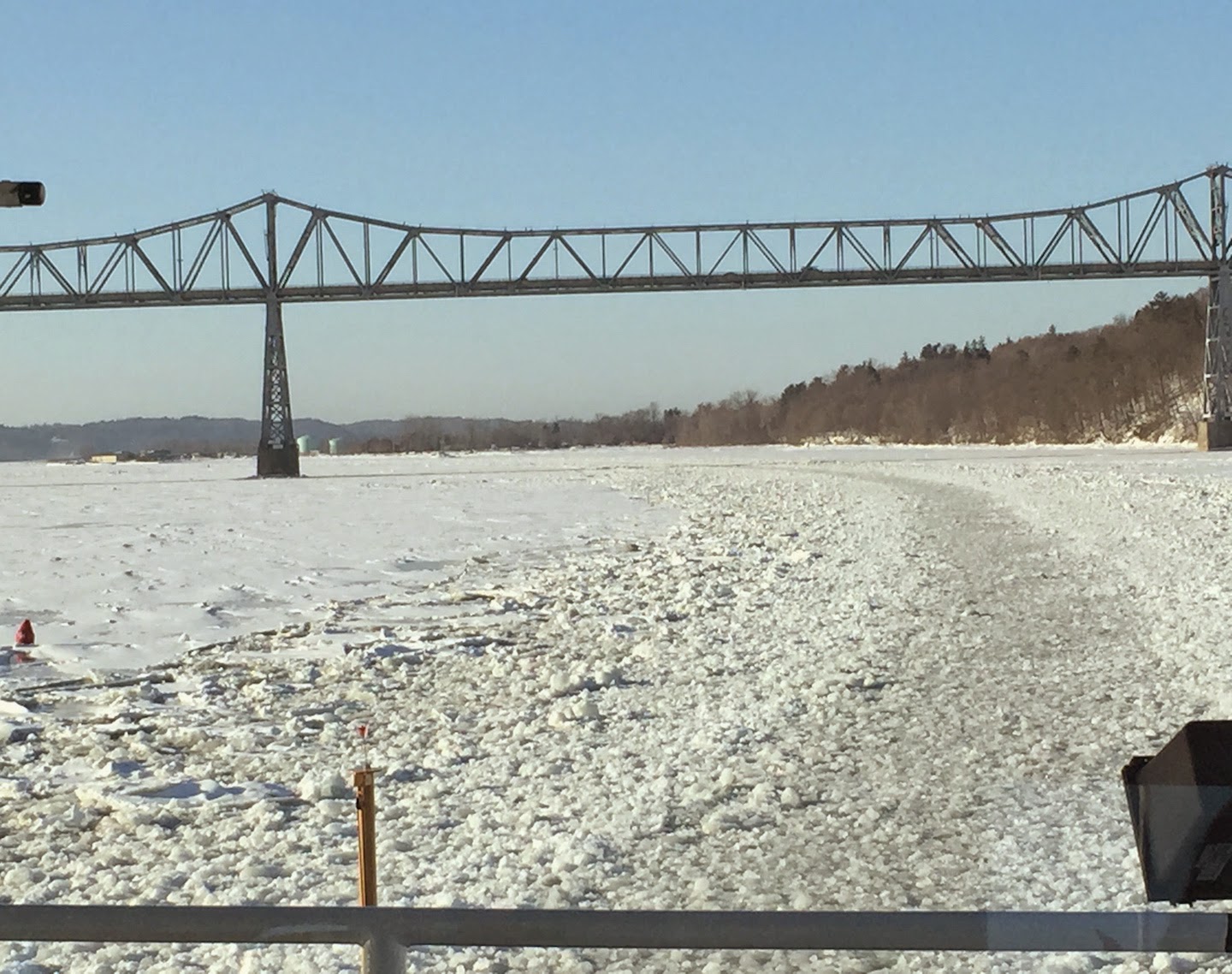 This morning, a tank barge, the Eva Leigh Cutler, is stuck in the brash, and the cutter has to break it out. 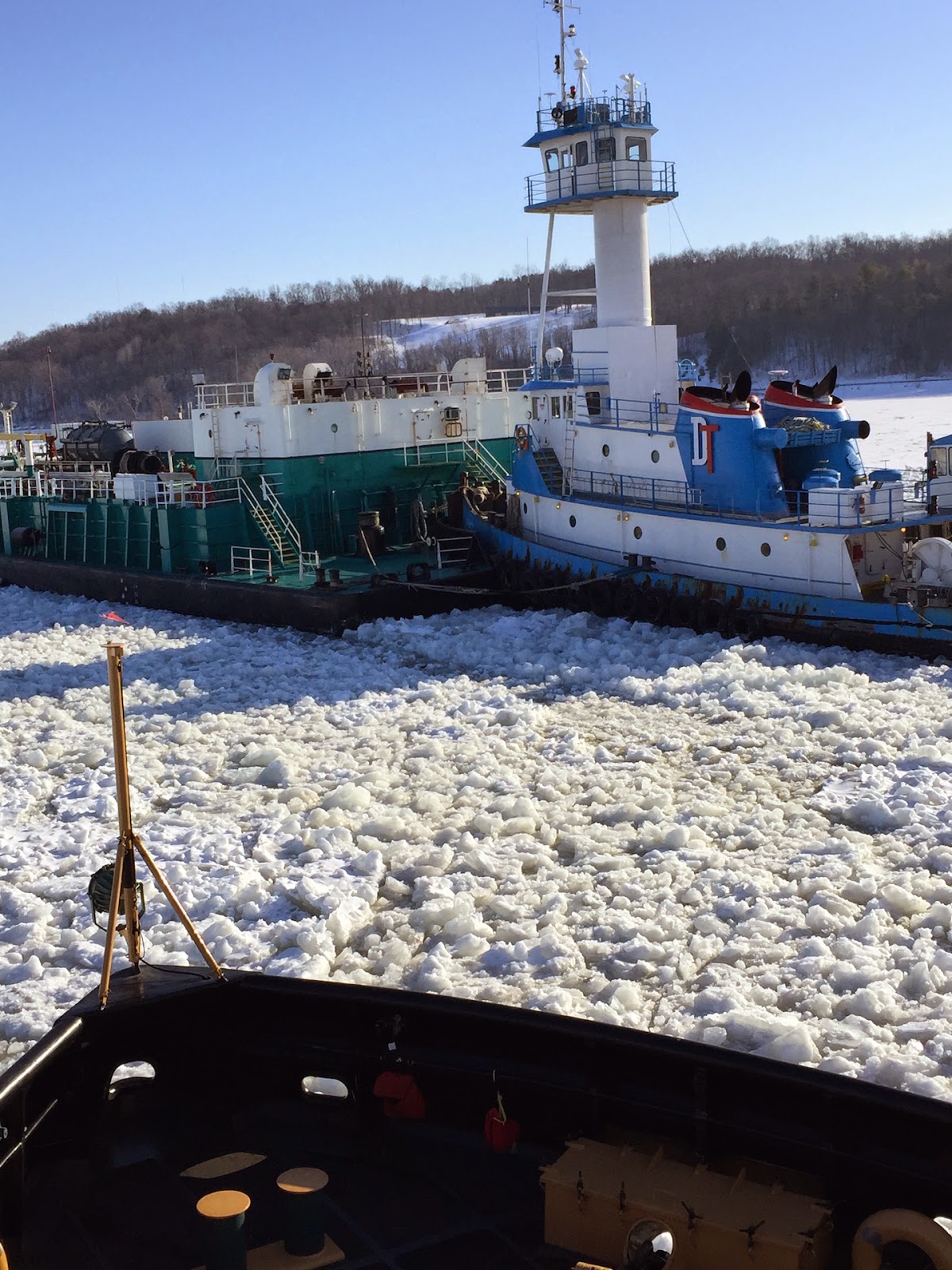 This task calls for the icebreaker’s most dangerous maneuver. The Sturgeon Bay plows toward the Eva Leigh at eight to ten knots (high speed) and, just a few feet from grazing its hull, engages a “bubbler system,” a sort of tugboat Jacuzzi that forces air out of ports below the waterline between the two boats’ hulls, relieving the pressure. 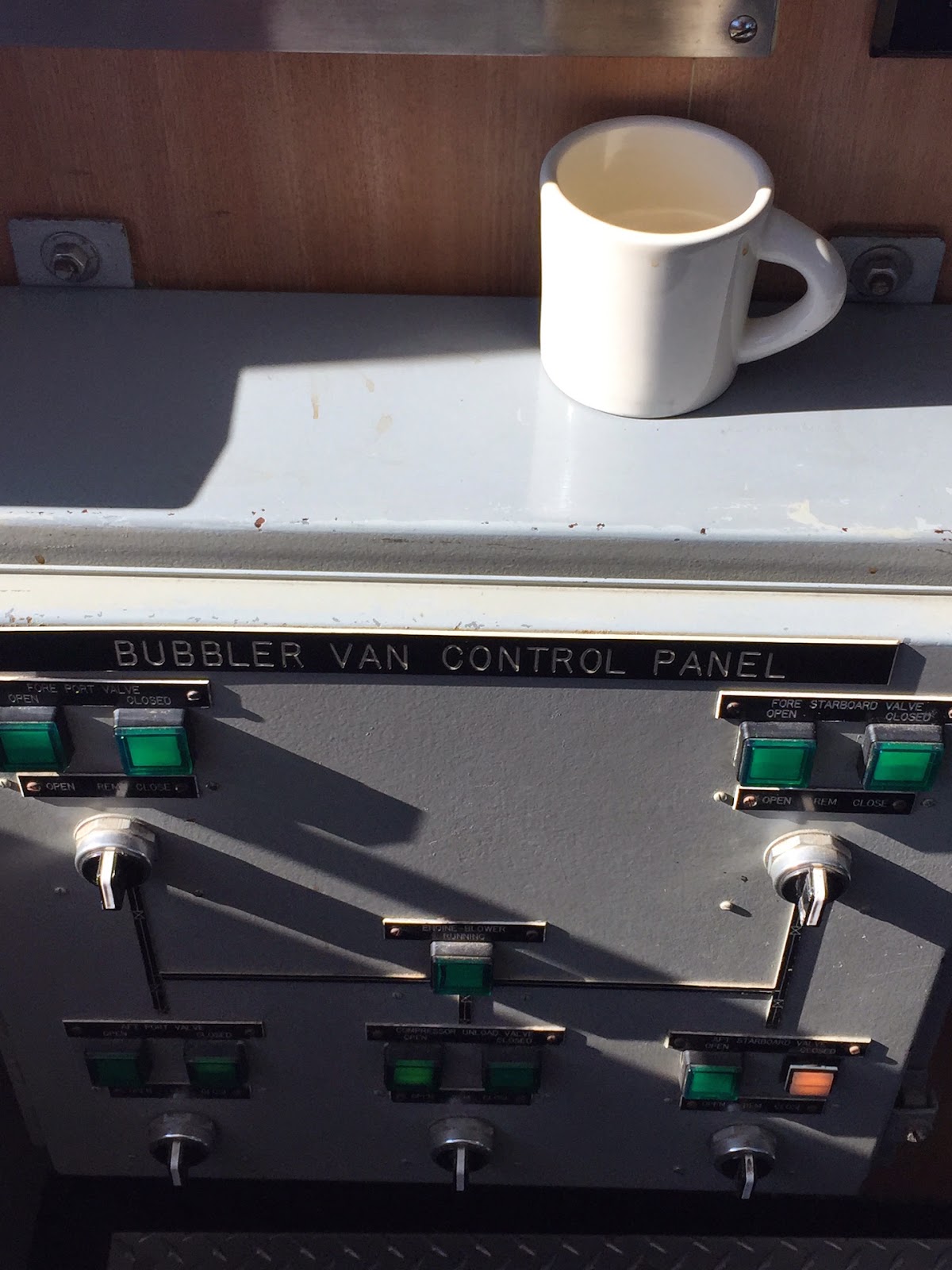 We make several wide passes, tracing an arc around the Eva Leigh, as if in a dance where two partners come tantalizingly close for a moment, only to fling each other apart.

Up in the bridge, the seventeen-member crew, almost all guys in their twenties, is a well-oiled machine of civility and jargon: “Rudder’s amidships.” “Right standard rudder right” “Got a 180 right now.” “Left five degrees rudder right,” and, frequently, “Aye, aye, sir” and “Raaaahger.” 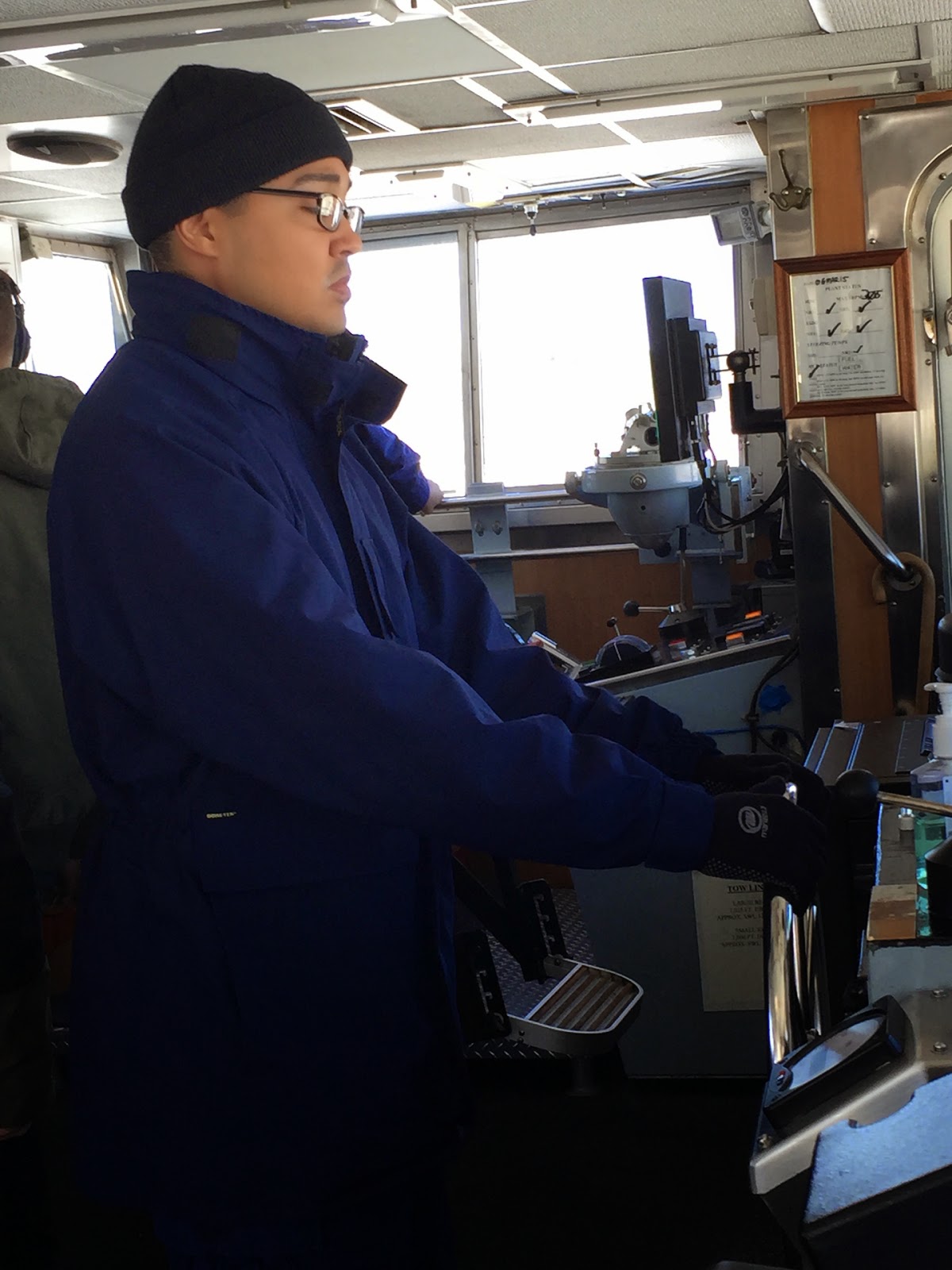 The Sturgeon Bay requires three people to drive it: the helmsman, who moves the rudder; the navigator, who maintains the position logs; and the officer of the deck (OOD), who follows the captain’s commands. (The crew also employs a couple of toys to help plot its maneuvers: a pair of wooden tugboats and a Magic 8 ball.)

The stream of calm call-and-response provides a counterpoint to the sounds out on the deck, like sheets of metal being thrown against each other.

After the Eva Leigh has been freed, we learn that a tanker, the Aphrodite, is coming downriver. Our next task is to carve out a nook off the main channel so any boats coming upriver can pull off to let her pass. (The shipping channel is typically wide enough for only one boat.) 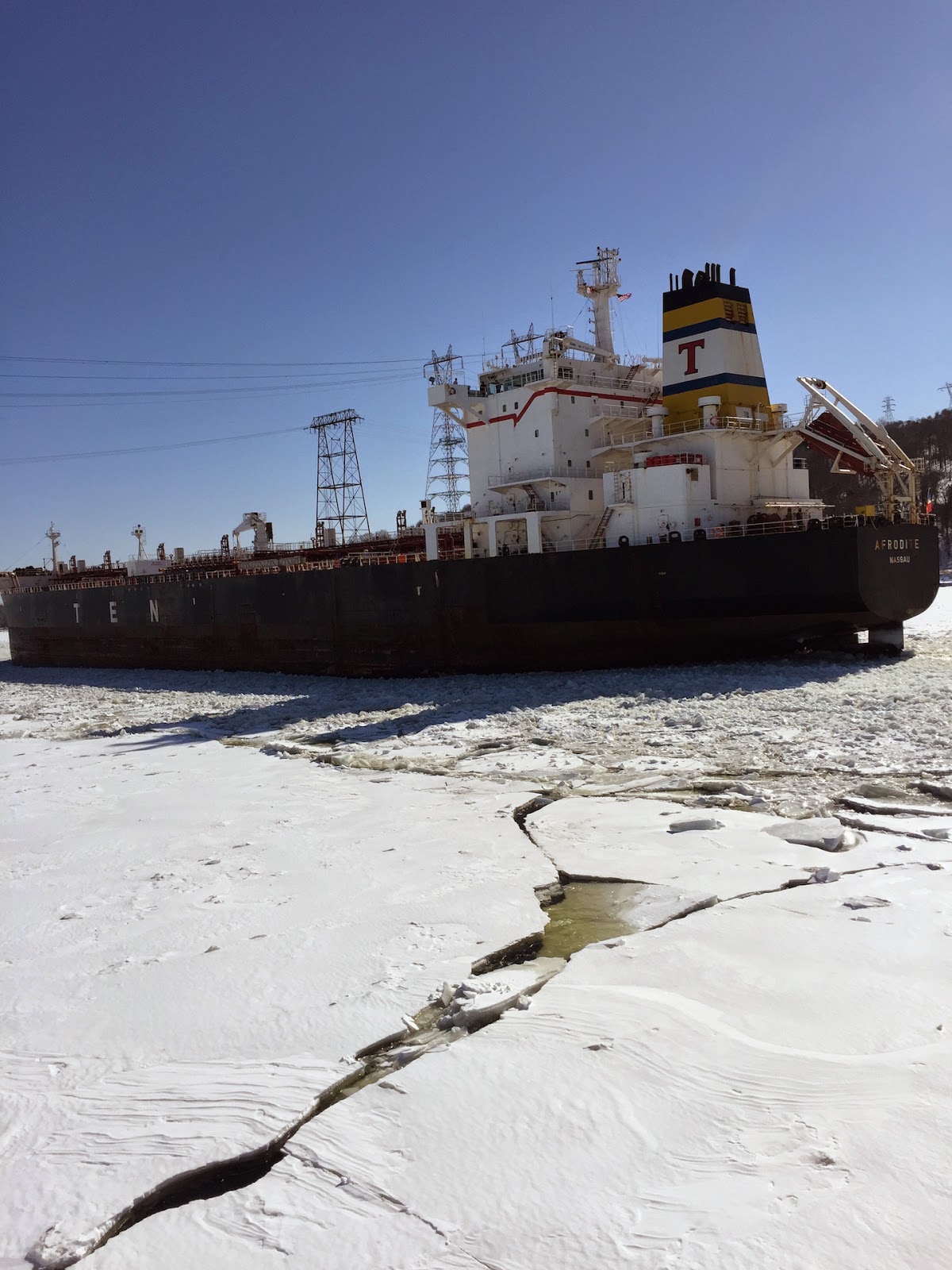 The Sturgeon Bay’s bow, five-eighths of an inch thick along its reinforced “ice belt,” smashes into the plate ice. Cracks splinter across the ice and sever it into plates, which shift as they settle atop one another and poke up like spires of a frozen underwater castle. 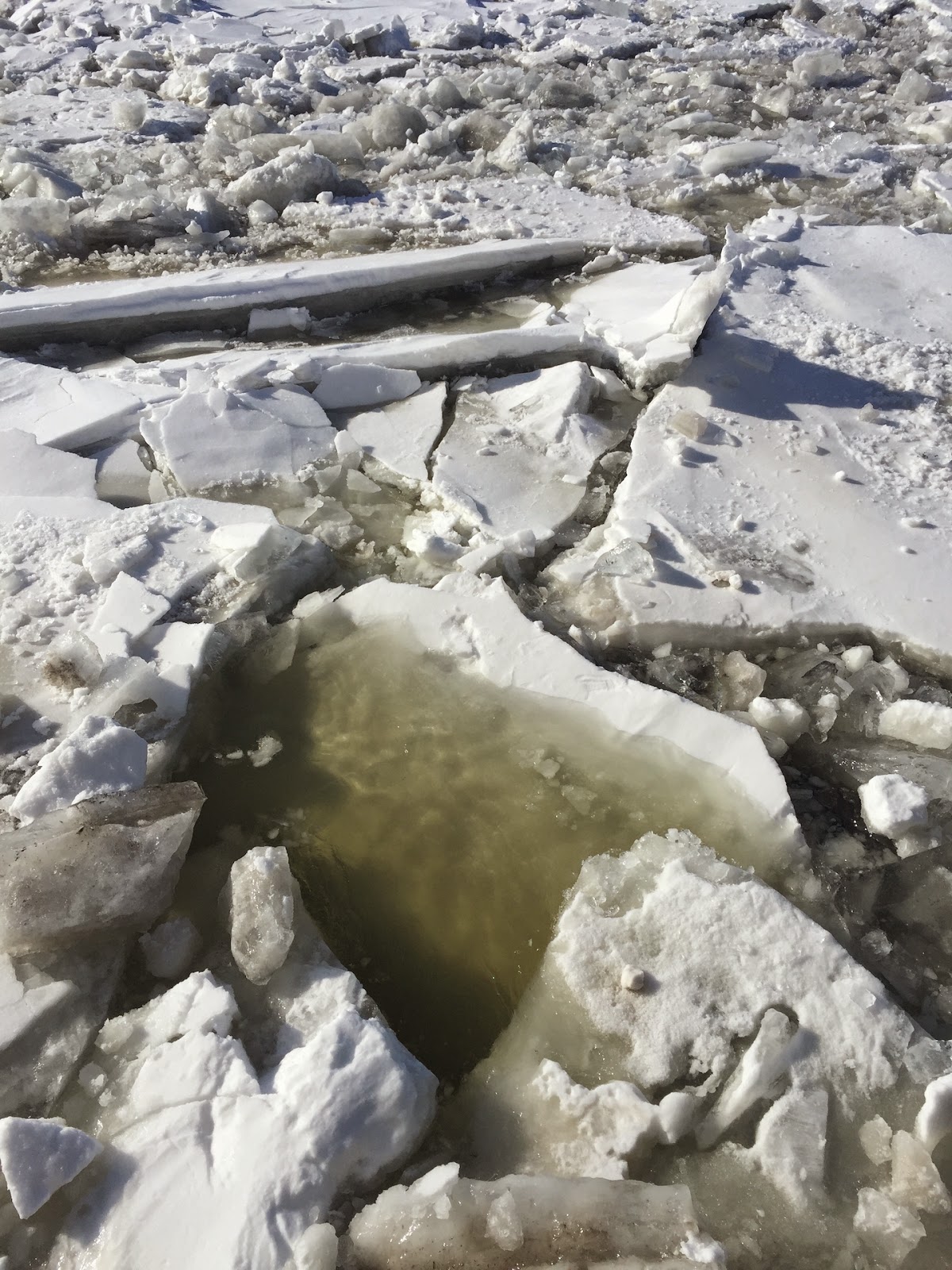 The wake churns the water beneath the ice, creating a sheet of undulating floes. 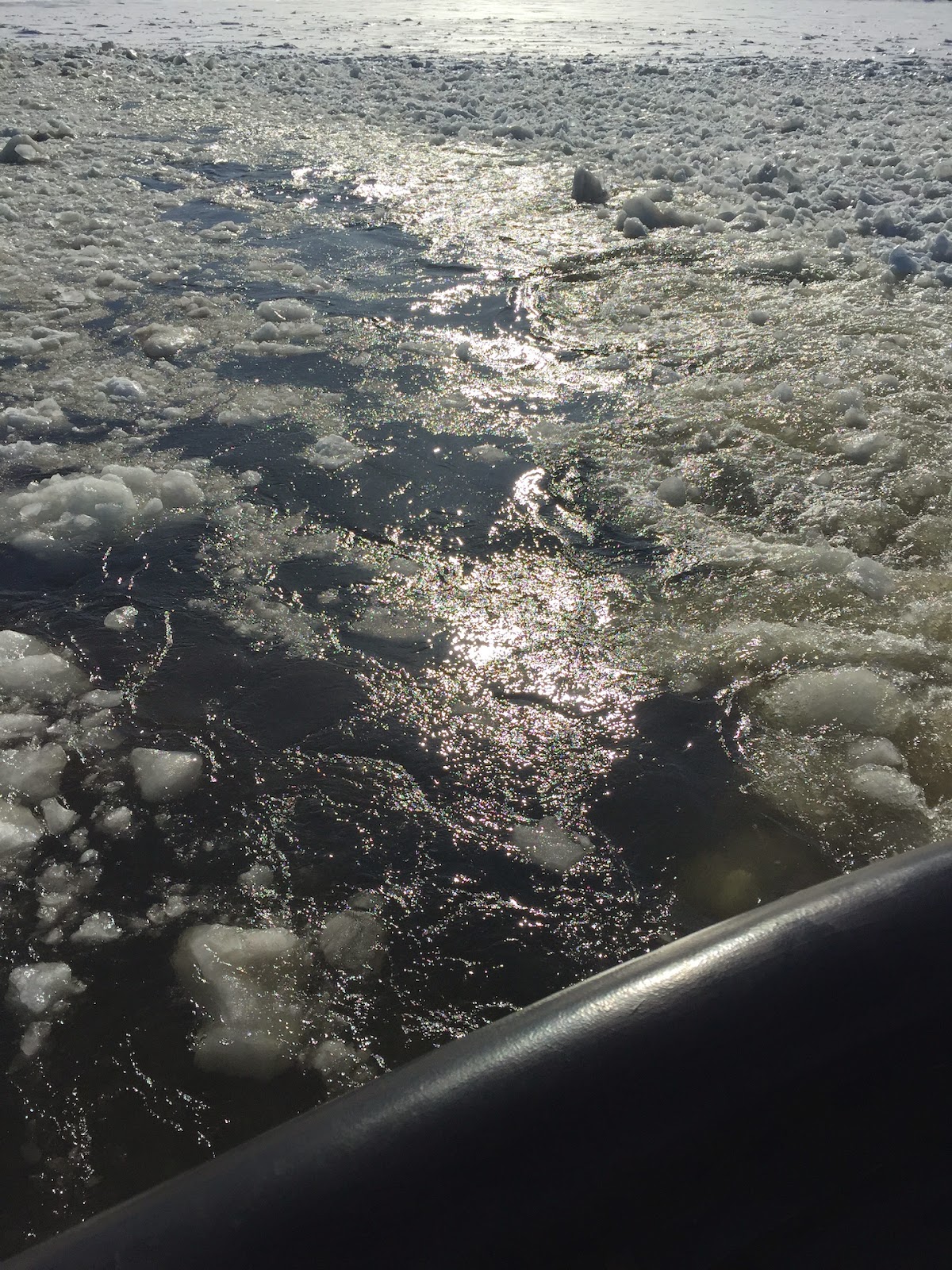 A lame coyote hobbles across the river, oblivious to the 2500-horsepower cutter surging toward it. Hawks, deer, coyotes, and foxes are all common sights on the north river, the crew says. 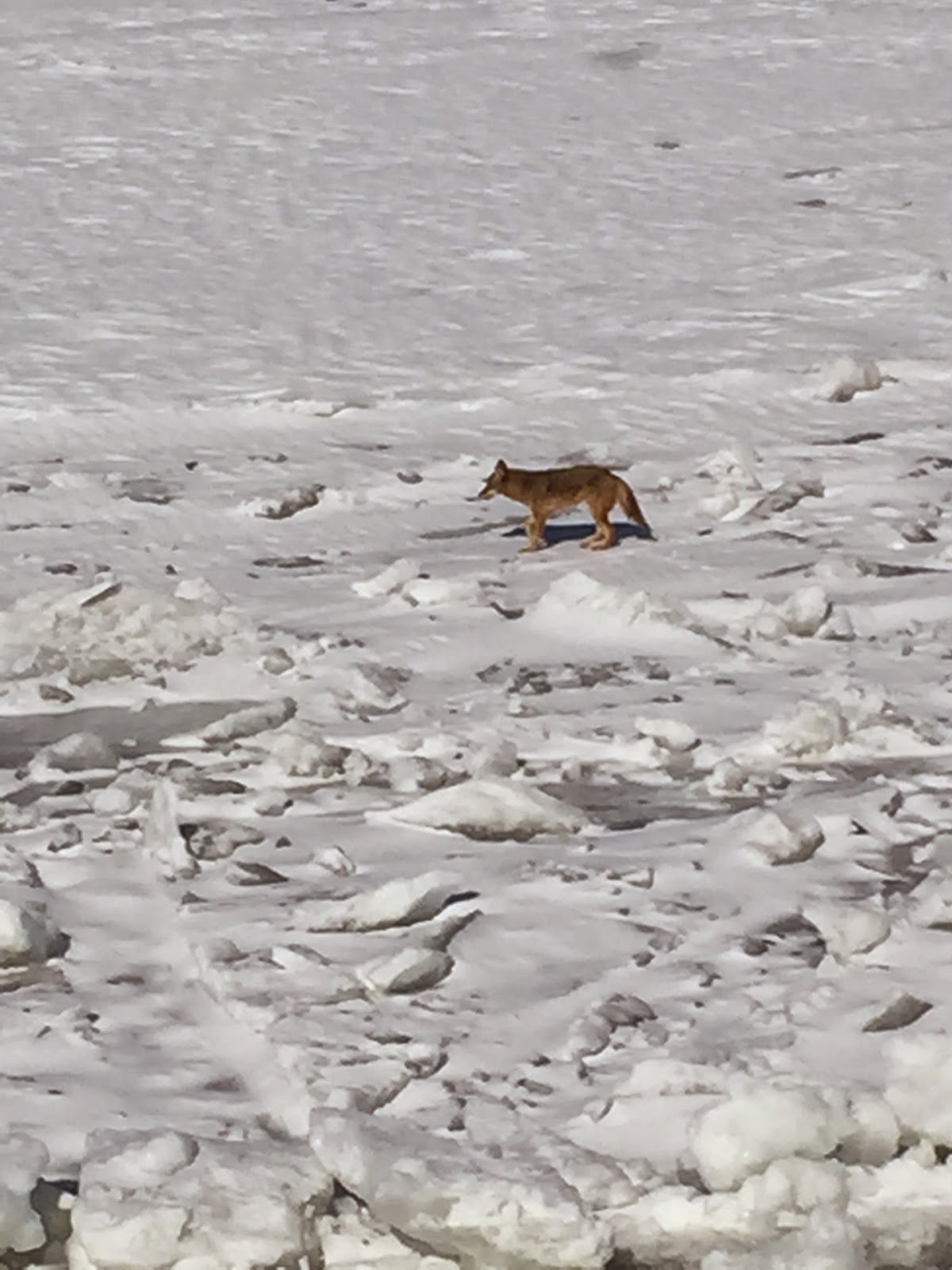 As the Aphrodite approaches, we pull into the new passing lane, intentionally getting frozen into place so we don’t drift into her path. There’s a rare moment of silence as we simply wait. Then we start to move, and the ice hisses as it brushes the hull. Sliding back into the channel, the Sturgeon Bay sounds like an old jalopy rattling down a rutted road. Up in the bridge, the OOD announces, “Steady she goes.” 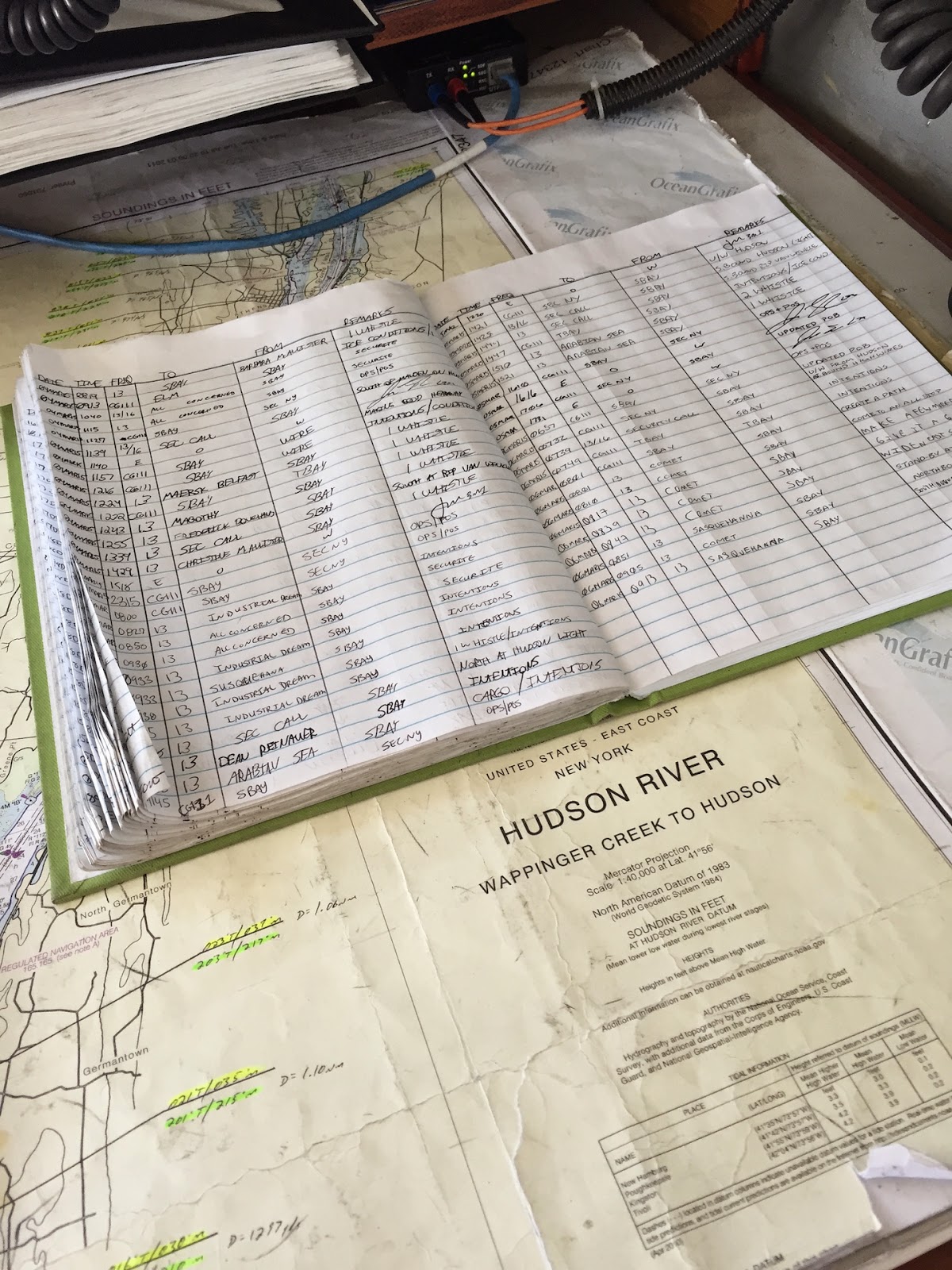 Thanks to Charles Rowe at the US Coast Guard, Lt. Kenneth Sauerbrunn, and the crew of the Sturgeon Bay. Photo of ice in Red Hook by Kate Rubenstein.