One recent weekday morning, a group of goat enthusiasts gathered at the intersection of Riverside Drive and 120th Street to see five of their favorite ungulates compete for the title of “Greatest Of All Time” (G.O.A.T.). A balloon-bedecked fence separated the crowd from the goats, who were up on their hind hooves trying to reach the shrubbery of Riverside Park, which was, for now, tantalizingly out of reach. 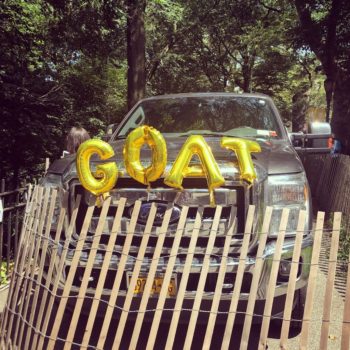 After the awards ceremony, the top four goats would be led from the podium, through a gate, and into a two-acre enclosure, where they would spend the next month munching 25 percent of their body weight in weeds each day and revitalizing the soil with their droppings. 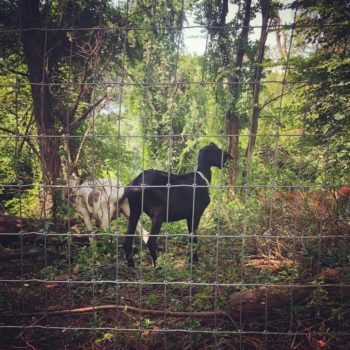 The fifth-place contestant would be returned to its home pasture in Rhinebeck, New York. As the park has learned, there is not enough Japanese knotweed, poison ivy, or porcelain berry to sustain more than four goats at a time. Massey, Bella, Skittles,  Chalupa, and Buckles were selected through a public “Vote the Goat” election (there’s also a “Goat Fund Me” site) from an original group of twenty-four; three thousand online ballots were cast. 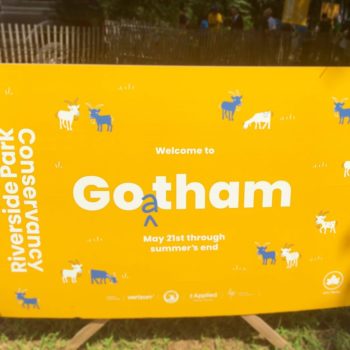 The goats debuted in Riverside Park in May 2019 as an experiment in natural, sustainable invasive-weed management called “Goatham City.“ They quickly became a local sensation. 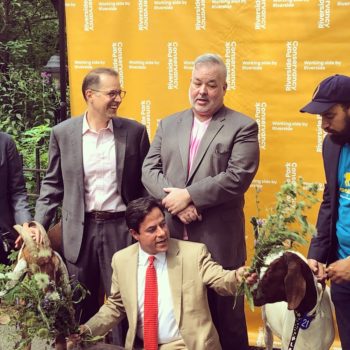 Goat puns abounded in the opening remarks—with a little soapboxing about paid family leave and marijuana legalization. Dan Garodnick, president and CEO of the Riverside Park Conservancy, presided. George Shea, the emcee of Nathan’s Famous International Hot Dog Eating Contest, certified each goat’s consumption performance. “We hired some of the most active, ambitious, and hungry summer interns and a full-time professional weeding staff,” Garodnick announced, gesturing to the goats. One of the conservancy’s human interns, Nina, in a tiara and gown, beamed from the sidelines. 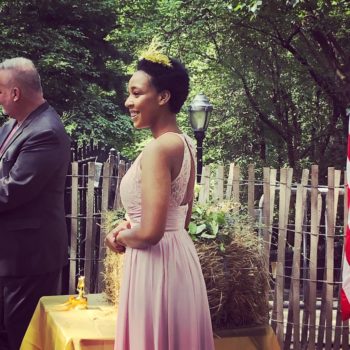 The goats were now trying to hurl themselves out of their pen. “You have goat to come down here,” joked councilmember Mark Levine, indicating the goats’ future home. “The weed situation was baaad.” In fact, the twenty-four original goats had been so effective—each goat ate about one thousand pounds of weeds over the spring and early summer—that they had to be sent home to give the weeds time to redevelop. 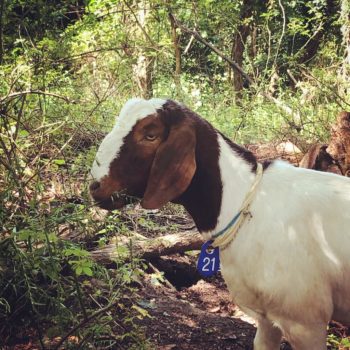 Finally, the goats were led to the podium by handlers wearing flower crowns. Nina the intern draped medals around their necks, Shea certified each animal as a champion eater, and they were presented with golden goat trophies and bouquets of weeds. Ten-year-old, 166-pound Massey from Massachusetts was pronounced the “G.O.A.T.” and, after making short work of her bouquet, dragged her handler to a table decorated with hay bales. 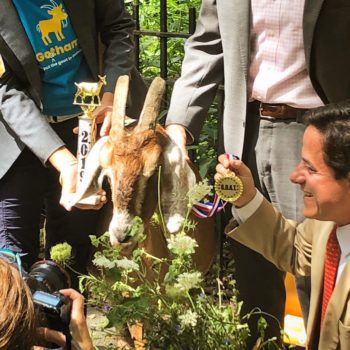 At last, the goats were released to the hillside. A guy in an I LOVE GOAT YOGA tank top snapped photos. A little boy holding a stuffed goat watched the animals tackling the weeds. 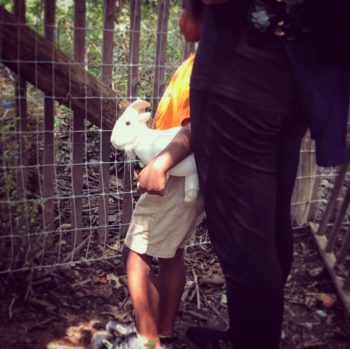 “One day I want to do a human-versus-goat eating contest,” Shea told a member of the press. He didn’t clarify if the food of choice would be hot dogs or poison ivy. 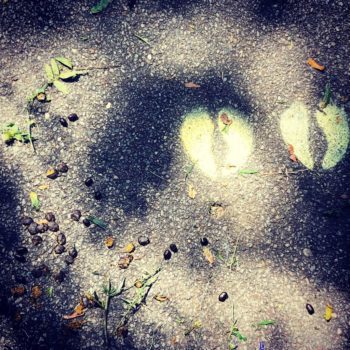