One evening not long ago, I decided to take advantage of the free canoe rides offered by the Gowanus Dredgers Canoe Club and treat myself to a more intimate look at the infamous Brooklyn canal than I was accustomed to from bridges and subway platforms. The club itself turned out to be a trailer filled with canoes, paddles, and life jackets with “Gowanus Yacht Club” scrawled across the back in marker. After strapping one on, and installed in my own canoe, I was blatantly marked a tourist of the canal, but no matter: it’s hard to be a mere nine inches from the Gowanus and not become part of it. 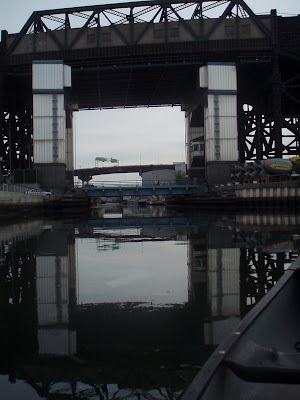 Within moments of paddling away from the dock, spooky currents in the seemingly stagnant water spun my canoe in circles. I consider myself a competent paddler, but as I tried to regain control of my boat, fetid water splashed onto my lap and pooled in my sneakers. The air smelled of gasoline, tar, damp cement, moss, and burnt rubber.

Finally I got past the currents and steered down one of the canal’s several branches. There were few signs of life besides the hiss of the subway clambering over the Smith–Ninth Street trestle and the thrum of cars passing over the metal drawbridges: pa-plank, pa-plank, pa-plank. The occasional bedraggled seagull swooped overhead; sirens moaned; cranes from scrap-metal factories transferred fistfuls of rattling metal onto barges tied to the canal’s banks. The wind rustled through rough leaves. 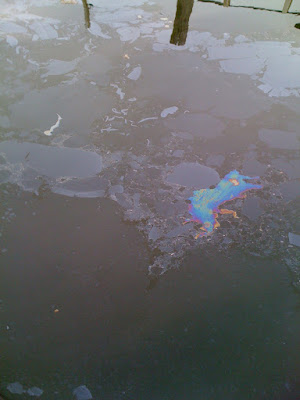 Gasoline formed rainbow pools on the water’s surface, reflecting the overcast sky and clouds with unexpected beauty, though drifting bottle caps, dime bags, and candy wrappers inevitably shattered them. I also spotted unmistakable lumps of fossilizing human waste, and—ominously, puzzlingly—floating rocks. Old, wet wood and frayed rope seemed barely to corral the trees that struggled toward the sky from the muddy banks, pushing through tangles of metal and piles of old tires. 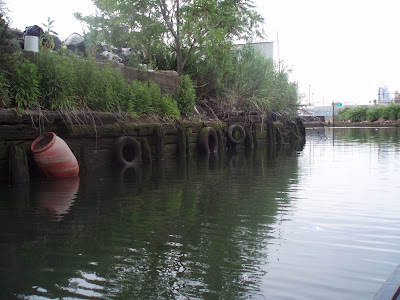 As I turned to head back to the club, a power boat manned by a middle-aged man in a blue T-shirt putted toward me and sputtered to a stop to let me pass. “Where did you put in?” the man called out. I liked his use of the term “Put in.” Apparently he hadn’t seen my yuppie life jacket; I had been mistaken for a fellow mariner. But I decided to tell him about the Gowanus Dredgers and its free sunset canoe rides. He regarded me dubiously, hand on his tiller. Just ahead, we could see two more life-jacketed canoers batting at the currents with their paddles. “Well, enjoy the evening,” he said, sweeping his arm toward the sky and firing up his outboard. The murky canal burbled in his wake, then settled back to its implacable stillness.