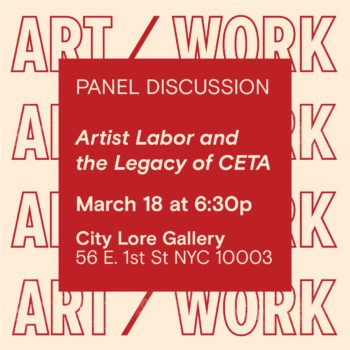 Registration is highly encouraged as seating is limited.

Proof of Vaccination and masks required

In conjunction with the exhibition ART/WORK, City Lore and Artists Alliance present Artist Labor and the Legacy of CETA, a panel discussion, on March 18th at 6:30 pm.

CETA pioneers from the Bay Area and New York City come together to discuss the impact of the Comprehensive Employment and Training Act on artists and arts infrastructure across the United States. Participating panelists will reflect on their roles in developing, administering, and participating in two landmark CETA-funded artists projects, and how those experiences ultimately impacted the course of their cultural careers.

Ted Berger is Executive Director Emeritus of the New York Foundation for the Arts (NYFA) where he began in 1973 as the country’s first statewide Artists-in-Schools Coordinator, becoming NYFA’s Executive Director in 1980 until retiring in 2005. Ted has been involved in helping to create many national and local initiatives, including such efforts as ArtsConnection, Studio in a School, the NYC CETA Artists Project, the Montauk and Orcas Conference for Support for Individual Artists, ArtsWire, the National Campaign for Freedom of Expression, the Urban Artist Initiative/NYC, NYCreates, and the New York City Arts Recovery Fund after 9/11.

In his work with the development of numerous arts and cultural and advocacy organizations, Ted often focuses on the centrality of living artists to the arts and society. He is a Trustee Emeritus of the Joan Mitchell Foundation where he also served as Treasurer and was involved in the planning and development of the Joan Mitchell Center, the Foundation’s Artist Residency Program in New Orleans. He presently consults throughout the country and serves on numerous boards and committees, including ArtsConnection, Association of Hispanic Arts, the Asian American Arts Alliance, Center for West Park, CUE Art Foundation, Design Trust for Public Space, HB Studio and Playwrights’ Foundation, the International Studio and Curatorial Program, the National Coalition for Arts’ Preparedness and Emergency Response (NCAPER), and the New York City Arts Coalition which evolved into New Yorkers for Culture and Arts (NY4CA). He has been recently appointed to the Think Tank for the development of Creatives Rebuild New York, a new initiative spearheaded by the Andrew Mellon Foundation.

Sara Garretson was the President of the NYC Cultural Council Foundation from 1976 to 1983. In addition to incubating a number of NYC arts organizations, CCF was instrumental in the creation of the CETA Artists Project which ran from 1977 to 1980. With CETA funding, CCF was able to hire 325 artists who worked in all disciplines and delivered cultural services to the public and non-profit sectors. Prior to CCF, Sara was a Cultural Policy Consultant conducting research and issuing reports for the Mayor’s Committee on Cultural Policy, the NYC Department of Cultural Affairs, and the National Endowment for the Arts. After CCF, Sara spent the rest of her career in economic development, in NYC, and in the non-profit sectors. During that period, she held Board positions (some in leadership) in a number of cultural organizations, including the Shaker Museum and Library, Oysterponds Historical Society, and The Arts Connection. Sara has been retired for 8 years and lives in an Eastern Long Island retirement community where she co-chairs the Art Committee which delivers extensive art programs to the residents.

John Kreidler is descended from a family of farmers, craftsmen, actors and circus performers. While studying the full spectrum of pre-medical sciences, he received a BA in political science (1967) and an MA in public administration (1968) from the University of California, Berkeley. His Master’s thesis examined the history and policy implications of the artist employment projects of the Works Progress Administration. From 1969 to 1973 he worked in Washington as a policy and budget analyst for the U.S. Office of Management and Budget responsible for a portfolio of Federal job training, youth employment and occupational safety programs during the Nixon Administration. In 1974, Kreidler developed the very first CETA artists project for the San Francisco Art Commission utilizing the recently-adopted CETA Title VI public service employment program. When word of the Bay Area’s successful CETA artist proposal spread throughout the country, cities across the nation similarly channeled Title VI CETA funds to develop programs for artist employment in public service roles.

From 1974 to 1979, he served as executive director of the Alameda County Neighborhood Arts Program, and then as chief operating officer of the San Francisco Art Institute. The remaining 27 years of his work life were spent as an arts and humanities specialist for the San Francisco Foundation and as executive director of Cultural Initiatives Silicon Valley. In both of these posts, he researched, lectured, and wrote on the history of the American arts ecology, and developed cultural policy simulations. Retired since 2007, he is pursuing lifelong interests in welded sculpture, furniture design and fabrication, and home-brewed ales.

Ademola Olugebefola (b. 1941) is an American postwar contemporary painter, whose versatility spans theatre scenic design, printmaking, murals, illustrations, and sculpture. An educator, lecturer, businessman, and renowned Harlem cultural activist, Olugebefola has an established legacy as one of the most respected visual arts founding fathers of both the Black Arts Movement and the Afro-Futurism Movement. In the late 1970s, he was a member of the Cultural Council Foundation’s CETA Artists Project.

His innovations in theatre scenic and graphic design have earned kudos from prominent directors, producers, and playwrights, and his artwork is represented in respected American institutions including the Library of Congress, the Greater Harlem Chamber of Commerce, Howard University, Memorial Sloan Kettering, the Nigerian National Archives, the National Collection of Guyana, and the Virgin Islands Council on the Arts. His professional papers are held at the Schomburg Center for Research in Black Culture, the Museum of Modern Art, the National Afro-American Museum and Cultural Center, and the Jazzinstitut Darmstadt.

Olugebefola is one of the founding members of the New York City-based Weusi Artist Collective, as well as of the Dwyer Cultural Center in Harlem. He represents the NY Metro Martin Luther King Jr. Center for Nonviolence in the NGO/ DPI at the United Nations.

Suzanne Randolph, Founder and Principal of Suzanne Randolph Fine Arts brings over 25 years of experience in the field of visual arts. Suzanne Randolph’s well-established career in the visual arts began with an early commitment to bringing the works of individual artists to diverse communities, corporate settings and public spaces. Over the years she has produced projects for an extraordinary range of clients and more recently has integrated the forward-looking principles of “design thinking” as a way of expanding SRFA’s business strategy. This approach addresses the specific needs of stakeholders through the creation of meaningful experiences resulting from the collaboration of artists and designers.

Suzanne’s career in curating and arts administration began as the Director of Works of Art in Public Places for New York City’s Department of Cultural Affairs, where she was responsible for the placement of works of art in public spaces within all five boroughs of the city and administrating grants for visual arts programs. As a senior staff member of the CCF CETA artists’ employment project, she managed the visual artists component to market and monitor public service placements of artists to work with and create works of art for public agencies and community organizations.

In January 1981, Slovin assumed leadership of the coalition of motion picture and television unions and guilds responsible for reopening the historic Astoria Studios. She soon thereafter proposed the creation of a museum dedicated to the art and history of moving image media. Under her leadership, Museum of the Moving Image came into being. Over the course of Slovin’s thirty-year tenure, Museum of the Moving Image achieved international recognition for the distinctive architecture of its building, and for the innovation and breadth of its gallery exhibitions, film and video screenings, and pioneering work in digital media.

Slovin started out as an actress, performing often at LaMama and other Off Off-Broadway theaters throughout the 1960s. Coming full circle, Slovin returned to acting in 2011, after retiring from the Museum. She is a proud member of Actors Equity.