An Assembly of Moths: Afghanistan One Year Later 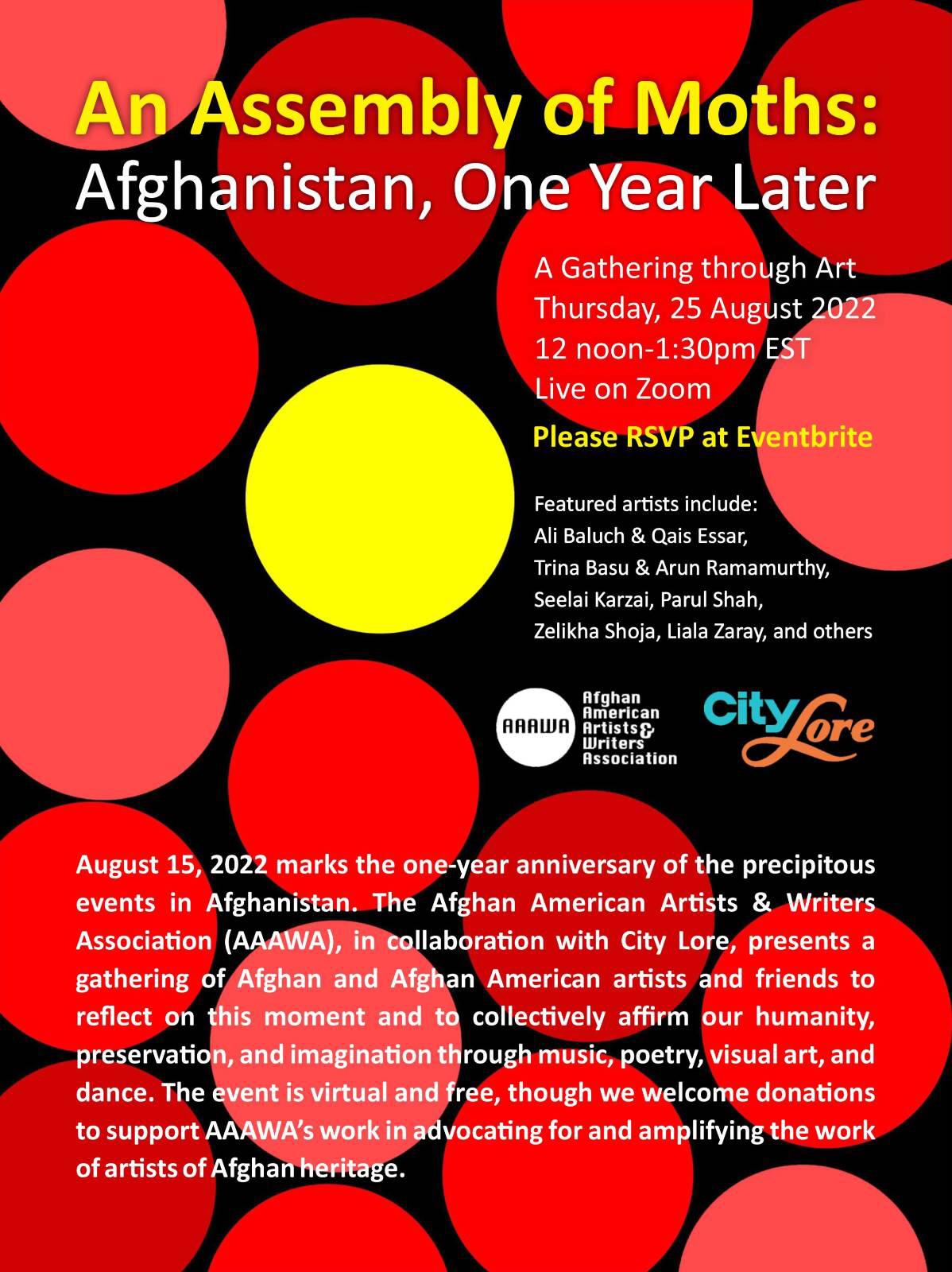 An Assembly of Moths: Afghanistan One Year Later

August 15, 2022 marks the one-year anniversary of the precipitous events in Afghanistan. The Afghan American Artists & Writers Association (AAAWA), in collaboration with City Lore, presents a gathering of Afghan and Afghan American artists and friends to reflect on this moment and to collectively affirm our humanity, preservation, and imagination through music, poetry, visual art, and dance. We come together in community and for community. We come together out of love and grief, and yet more love. We assemble with the ferocity of moths toward that which is most luminous and most enduring.

The event is free, though we welcome donations to support AAAWA’s work in advocating for and amplifying the work of artists of Afghan heritage.

The Afghan American Artists & Writers Association is a collective that organizes community programs and exhibitions, creative workshops, and public commentaries in order to showcase pivotal Afghan and diasporic works to broad audiences. Based in North America, AAAWA aims to amplify work that critically analyzes discourse on Afghanistan in the U.S. mainstream, where Afghan voices are routinely ignored or reduced to cultural tropes. Through its forums, AAAWA illuminates a multiplicity of issues ranging from hybrid identities to gender and sexuality to the multigenerational impacts of war, including the ongoing ramifications of U.S. imperialism and capitalism. We see ourselves connected through not only our ancestral ties, but also through a shared vision for social justice for marginalized communities globally. We are Afghans, Muslims, and/or queer Americans with intersectional identities. More at https://aaawa.net/

Founded in 1985, City Lore’s mission is to foster New York City — and America’s — living cultural heritage through education and public programs in service of cultural equity and social justice. We document, present, and advocate for New York City’s grassroots cultures to ensure their living legacy in stories and histories, places, and tradition. We work in four cultural domains: urban folklore and history; preservation; arts education; and grassroots poetry traditions. In each of these realms, we see ourselves as furthering cultural equity and modeling a better world with projects as dynamic and diverse as New York City itself. City Lore has partnered with AAAWA on a number of projects, including hosting their 2015 exhibit Distant Attachments: Unsettling Contemporary Afghan Diasporic Art, as well as supporting their campaign “Emergency Funds for Afghan Artists” last year. More at https://citylore.org

Assembly of Moths takes its title from a poem of the same name by Khalilullah Khalili. The poster was designed by Mohammad Sabir. 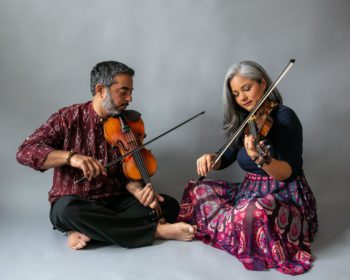 Violinists Trina Basu and Arun Ramamurthy reimagine the potential of string chamber music with a unique sound both deeply intimate and cinematically expansive. Rooted in traditions of South Indian classical music, Western chamber music, and jazz, the duo is uniquely positioned to create a sound that feels ancient, orchestral, and contemporary or as The New Yorker put it “free-flowing and globe-spanning.” Combined with the duo’s fluency in improvisation, there is a clear architecture to their sound that still gives space for the two violins to be delightfully indiscernible and shine individually. Their forthcoming debut studio album, Nakshatra, the Sanskrit word for constellation, is a profound exploration of this dance between a collective and singular sound, bursting with energy, playfulness, and a cosmic gravitas. Arun and Trina live in Brooklyn with their two children. 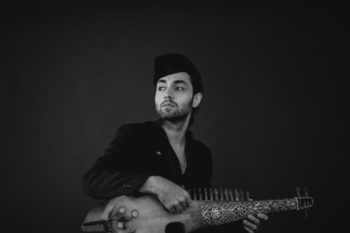 Qais Essar is a contemporary Afghan composer, instrumentalist and producer who channels his melodic designs through the rabab, a 2,500 year old instrument from Afghanistan. He has toured extensively, sharing his new genre of music nationally and internationally. His first LP, The Green Language (2014), quickly became an Amazon #1 bestseller, followed by Tavern of Ruin (2016), and his 3rd album, The Ghost You Love Most (2018) to critical acclaim. . He has contributed original music to feature film and television also, composing for 2021’s Oscar-nominated film Three Songs for Benazir. In 2017, Qais was recruited by director Nora Twomey to compose an original song for her Golden Globe and Oscar-nominated film, The Breadwinner (produced by Angelina Jolie). He earned a Canadian Screen Award for “Best Original Song” for his piece The Crown Sleeps. Additionally, he orchestrated a sold-out run of the musical Tear a Root from the Earth at the OBIE award winning Ice Factory at the New Ohio Theater in New York City. Essar continues to be featured in festivals and venues around the world including the Newport Folk Festival, SxSW, The Kennedy Center, Treefort Music Festival and more. 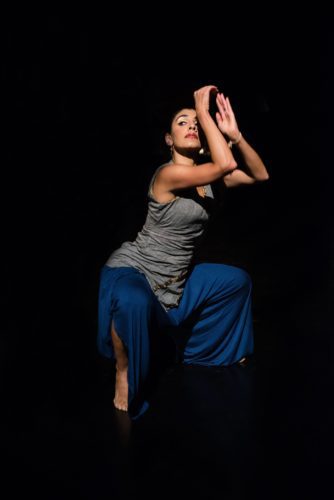 Parul Shah of the Parul Shah Dance Company is an acclaimed Kathak and contemporary dancer and choreographer. Shah preserves the form’s aesthetic integrity while exploring contemporary stories and questions around belonging, identity, and empathy. Her work aims to create shared experiences and lasting connections between performers and audiences.

Behind Parul’s work is decades of rigorous Kathak training under the world-renowned guru and choreographer, Padmabhushan Kumudini Lakhia. Parul’s repertoire spans both classical and contemporary dance vocabularies and her influences include her own experiences and observations as much as her training. Building on the dance form’s mythological storytelling roots, Shah explores narratives, using a movement vocabulary that draws from her classical training but extends to her personal history and culture to communicate the dynamic and often paradoxical nature of modern life through compelling solo and group choreographies. She is especially driven to shining a light on marginalized stories, and is committed to outreach and education. Parul’s New York studio is home to both the Parul Shah Dance Company and her training facility. 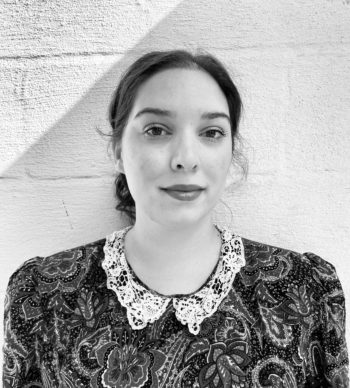 Zelikha Shoja is a visual artist and researcher based on Onondaga land (Central New York). Her artistic practice is engaged in communal storytelling in the Afghan diaspora and post-memory, or the transmission of memory. She holds a BIS in Diaspora Studies from George Mason University and is currently pursuing an MFA in Art Video from Syracuse University. 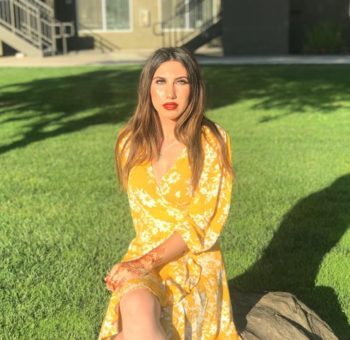 Liala Zaray is Pushcart prize nominated poet who hails from the Bay Area. She holds an MFA from St. Mary’s College. Her work has been featured in or is forthcoming in Palette Poetry, Smartish Pace, ZYZZYVA, and The Journal. 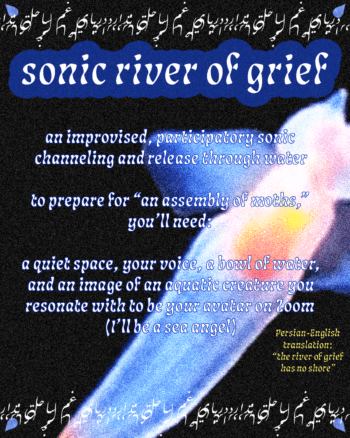