Back in 1975 two City College professors became aware of the dearth of resource materials about African American art, drama, music and literature available to their students. So James V. Hatch, a professor of English and Theater, and his wife, Camille Bishops, an African-American artist and filmmaker, set out to do something about it. Over the following 34 years, they put together the Hatch- Billops Collection, a not-for-profit research library, which includes over 13,000 slides of work by African-American artists; 4,000 black and white photos documenting writers, performers and visual artists; and 20,000 pieces of written material from doctoral dissertations to theater programs, letters, and books related to minority artists.

At the heart of the collection are 1,500 taped interviews with African American and some Asian and Hispanic filmmakers, actors, musicians, sculptors, photographers, animators, choreographers, singers and painters (about 340 of which have been transcribed and published). The procedure is still the same as it was early on. Announcements are sent out inviting the public to come watch Hatch, Billops or another artist conduct interviews in the couple’s downtown loft. In addition to the benefit to the assembled crowd, the oral histories collected offer students and researchers invaluable insights into the role of the nation’s diverse populations in the development of the arts in America. Some of the earlier interviews of elderly performers address topics like the Harlem Renaissance, the role of black musicians during the Depression, the resistance of Hollywood filmmakers during the 1930s and 40s to using black actors and actresses. Initiating and bringing to fruition a project that interests them is something Hatch and Billops have done repeatedly. They’ve traveled the world, authored and illustrated books, made seven films, and written and performed numerous plays and musicals. “We put on plays and make our friends be in them. We say–there’s nobody coming for us but us,” says Jim. “We tell young artists–do it! Don’t wait for the grant or to be discovered—get busy!”

It is not far from the truth to suggest that Margarita Kagan danced her way from the town of Brest in Belarus to Brighton Beach. As a young girl in Russia she learned folk dancing and joined a local troupe. However, the Russian authorities—who thought her father’s job with the railroad too politically sensitive to allow his daughter to travel —prohibited her from touring with the troupe outside the immediate region. Increasingly, Margarita’s mother and father felt the oppression of the Soviet regime, feared for their children’s future, and longed for freedom in America.

In the early 1990s, Margarita moved to Syracuse where she found herself organizing a folk festival for the Russian community. “We ordered 100 pounds of borscht and it all sold immediately,” she says. Arriving in Brighton Beach in 1993, Margarita quickly fell in love with the sea air, the boardwalk, and the Russian community that was so appreciative of their newfound freedoms in this country. She found her way to the Shorefront Y where she volunteered and soon became program coordinator.

A dancer herself, Margarita set out to ensure that the talented men and women she met in her new community would find a venue for their art. She hosted Pushkin celebrations on the occasion of the 200th year of his birth and regional reunions and celebrations for the cities of Kiev and Odessa. She hooked up with the Russian Millennium Theater, where she helped mount Jewish Purim Plays and Chanukah celebrations and, beginning in 1996, she began working with the Center for Traditional Music and Dance, where she engaged, among others, the Central Asian Bukharan Jewish community for a series of remarkable public programs.

On 9/11, the Russian community lost 110 individuals who worked in the Towers. Margarita organized a benefit for their families. In 2002, she broke her leg, making it more difficult to get around. Yet, she was undaunted. “If it hurts, it hurts – so let it hurt,” she said. Margarita and her husband, Jack Likwornik, host salons in their Brighton home, with 50 to 60 people gathering on their porch and in their living room to hear Russian accordion players, violinists, singers, and comedians hold forth in Russian, English, and Yiddish. Ever looking for new ways to benefit the community, Margarita also started a non-profit organization with her husband, to promote and give voice to Soviet artists. 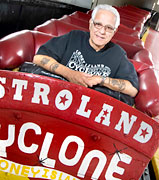 Although he was born and raised in Coney Island and has spent 34 years tending the Cyclone, Astroland’s famous 82-year-old roller coaster, Jerry Menditto has never once taken a ride on its clacking wooden rails. “I just don’t like drops,” he says. However, year after year, Jerry has made sure that the historic roller coaster is safe for those who do. When he was first asked to take on this responsibility, he remembers, “I said I’d do it for a year. Then I did it for another year. I never left. I married the ride, so to speak. My wife calls herself a summertime widow!”

As a young man, Jerry eagerly “walked the tracks,” climbing the rails in search of a broken screw, loose board, or something dropped by a rider that might get caught in the wheels. Over the years, he’s found wigs, false teeth, watches, combs, eyeglasses, hats, and even an artificial finger.

Jerry soon learned that his customers want to be scared—not just by the fast drop down a steep hill or being whipped around a sharp corner. They also love the click-clicking sound of the cars climbing the first hill. “The noise gets them,” he says. “You can hear the wood stretching and it makes it feel like it’s going to fall apart.” Any attempts to make the ride more comfortable by padding the bars or seats were greeted with complaints –“What are you trying to do, make it safe? You’re taking the thrill out of it! You’re making it a kiddie ride!”

The Cyclone is Jerry’s legacy. When he first came to work on it in 1975, the ride was falling apart and condemned. “It’s not rotten now, not condemned,” he says. “That’s something to be proud of. I kept something alive. When I’m gone from here, I just hope whoever comes in has the same feeling about keeping it going.”

Rekha Malhotra is a producer, curator, educator and activist based in New York City. Called the “ambassador of Bhangra” by the New York Times and named one of the most influential South Asians by Newsweek, she is among the first DJs to merge classic Bhangra and Bollywood sounds into the language of contemporary dance music. Since establishing herself on the New York club scene with Basement Bhangra at SOBs nightclub in 1997, Rekha has produced some of the longest running and most successful parties in New York including Bollywood Disco, Mutiny,and Beat Bazaar.

Versed in a broad cross-section of musical genres–from Bhangra to Dancehall to Hip Hop to Bollywood– Rekha has helped launch the careers of artists across the musical spectrum. DJ Rekha was the first to present Punjabi MC, Tigerstyle and M.I.A in the United States and was a key contributor to their early success in North America. In 2007, Koch Records marked the 10 year anniversary of Basement Bhangra with the compilation DJ Rekha presents Basement Bhangra, featuring original music from Wyclef Jean, Panjabi MC, and Bikram Singh.

Rekha has brought together performers and musical styles from around the world and has collaborated on projects far beyond the DJ Booth. She handled the sound design for Sarah Jones’ TONY award-winning show Bridge & Tunnel; was music supervisor for the documentary film, Brown Like Dat; and coordinated music programming for the BBC’s production of Tanuja Desai-Hidier’s novel Born Confused. Rekha has also given lectures and led workshops on Hip Hop, politics and South Asian art for various universities and institutions including the Smithsonian, Brooklyn Museum and Columbia University. Her work has been featured on CNN, NPR, and PBS.

In early 2009, Rekha embarked on a three-week tour of India as a Cultural Ambassador to the U.S. Consulate. She currently performs regularly at venues around the world and teaches courses on Bollywood and Bhangra at New York University. She is also curating the Desi Diaspora film series at the Tribeca Film Festival.