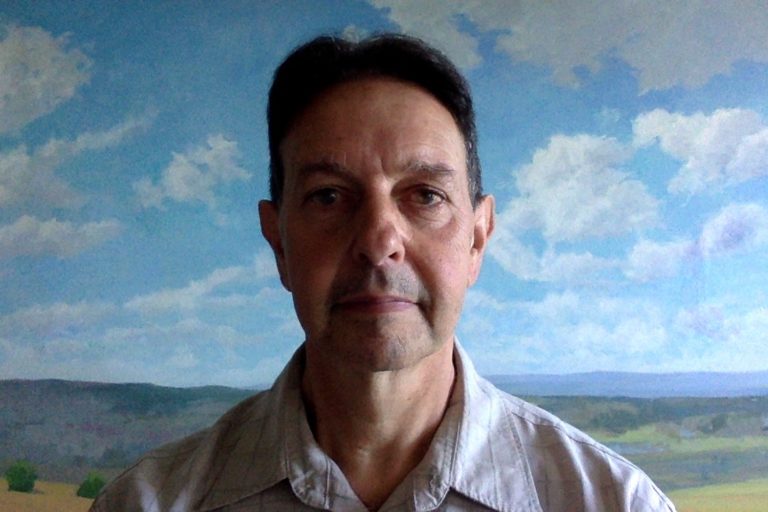 My name is Howard Better and I am a film-maker and collage artist.

My background is in film and video, film and video editing, and animation. I have always approached movie-making with the same type of thinking I use to make my collages; juxtaposing images to create unusual thought patterns, making connections that did not previously exist. By the same token, I see my collages as “little movies”, in that they are circular in nature and unfold in time as they spin. Images echo and reinforce other images, and as these objects unfold, new combinations are continuously created, leading themes and patterns to begin to show up.

One inspiration for the spinning, collaged cans has been Tibetan Prayer Wheels. In the Tibetan Buddhist tradition, the spinning of prayer-covered wheels, similar in shape and size to my cans, is a method of injecting thought into the World.

For some indoor shows, I have attached the strands of cans to battery-operated motors which keep them spinning continuously. I have shown them in several window installations in which I change the cans every few days. At the moment I have completed about two thousand cans, and hope to continue making more. I find the sheer number of the cans coupled with their compete individuality creates an interesting tension between their origin of mass-production and the images which have been glued onto them. The collages act as labels for products which only exist in the minds of the viewers who can find ways to integrate these juxtapositions of imagery into some form of understanding.

I like creating installations where the viewer can walk among these collaged cans, creating their own pathway through a sea of floating images. I especially like them hanging among the plant life, as if they were fruit growing from the trees or charms placed there as warnings or messages from an alien consciousness. Owed to the effort that goes into creating each collage, I am moved at the idea that they are created from material discarded by our society when I see them dripping with raindrops or silhouetted against the snow. They take on a form that influences our thought patterns for the time, but will, most likely, end up back in the garbage. I’m fine with that.

What students and teachers say about Howard: