“There are nine different words for the color blue in the Spanish Maya dictionary,” writes Earl Shorris, “but just three Spanish translations, leaving six [blue] butterflies that can be seen only by the Maya, proving that when a language dies six butterflies disappear from the consciousness of the earth.”
6,500 languages – with at least that many words for butterflies – are spoken in our fragile world. By the end of the century more than half will disappear. Our languages are melting like the icecaps.

KHONSAY: POEM OF MANY TONGUES, directed by Bob Holman, produced by myself and City Lore is a tribute and call to action for linguistic diversity. A 15-minute motion poem (poem on film), each line comes from a different endangered or minority language, currently referred to as treasure languages. 48 speakers each speak in their mother tongues, as line by line, language by language, the poem is created. In the Boro tongue of North India, itself a treasure language, Khonsay means to pick up something with great care, as it is rare or scarce. We invite you to watch it here:

The written poem, along with background information, and information on how to contribute to endangered language revitalization appears at www.khonsay.com . 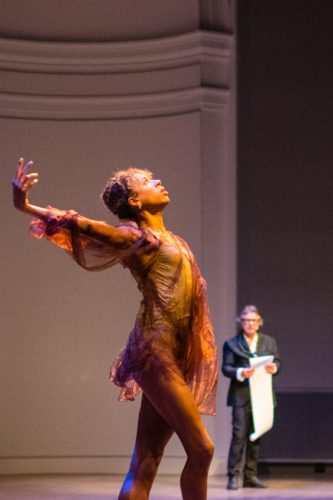 It was a screening of KHONSAY that piqued the interest of Robert Rosenwasser, Creative Director of Alonzo King LINES Ballet. The ballet, which will premiere in San Francisco on May 4, was choreographed buy Alonzo King to stories, chants, songs in endangered languages; the theme of the ballet is the loss of cultures and resultant disruption in the Ecology of Consciousness. A taste of the ballet was recently seen in “Let the Body Speak,” an event produced by Amy Schoening at the SF Opera. KHONSAY was playing silently in the lobby as the audience gathered, a visual parade of diversity of the world’s language speakers. Then the audience entered the Atrium Theater to the many voices of KHONSAY rising to a crescendo and then then an abrupt silence and blackout – a world without language diversity is a silent world. “Let the Body Speak” was performed by poets, musicians, and dancers from a variety of cultures, and in Chochchenyo Ohlone, Hawaiian, ASL, and Nisenan languages. Bob read the English version of KHONSAY from a scroll as the LINES Ballet dancers swirled around the stage.  The audience joined the Nisenan rock band Walan Amana to end the show with “Isimdiw,” “Stand By Me” in Nisenan, which now has a single fluent speaker. But that night 500 people were singing in this treasure language.

As the poet WS Merwin notes at the close of Bob Holman and David Grubin’s film Language Matters, “where will meanings be when the words are forgotten.” Scholars have shown that many of the world’s most endangered languages and many of the planet’s endangered species appear in the same geographical areas, tying the disappearance of languages to the fate of the planet. Languages like the flora and fauna of the planet are part of a world ecology.

We need to treasure language. “The true author of a poem,” writes Octavio Paz, “is neither the poet nor the reader, but language.” The Poetry of Everyday Life – the wellspring of meaning in our everyday lives – is embedded in words. With the loss of languages around the world humanity loses a portion of its inventive and creative genius, and six blue butterflies disappear from the consciousness of earth.