I’ve been spending some time lately in a chair in the corner of a hole-in-the-wall shop on Centre Street, just south of Canal. Despite its hectic location and cramped quarters, the crystal chair at Magic Jewelry has given me enough positive energy to drift out the doors and up lower Broadway on a cloud of relaxation, dodging tourists and taxis with hardly a trace of stress. 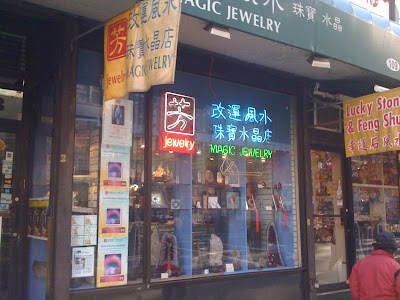 The first time I went to Magic Jewelry, I had my aura read by a beatific Chinese woman dressed almost entirely in pale pink. After she’d deciphered the colored blobs of my energy fields from a Polaroid snapshot, she suggested I try out the “crystal chair,” an unassuming wooden chair under a canopy in the corner of the shop, flanked by a large, pointed crystals, one black and one white, both resting in plastic boxes at waist height. I sat and, as instructed, placed my hands on top of the crystals. They were so cold I flinched at first, but also smooth and dense, and I could feel the rougher edges tapering toward the pointed tops. Bird music was playing, and I closed my eyes to the room: the fake Christmas tree hung with red good-luck envelopes, the traffic through the neon-lit window, and a takeout clamshell heating up on the radiator. Almost instantly I felt calmed, and somehow (magically?) all distracting thoughts dissolved as soon as they entered my mind. I found I was sitting completely still, and my tense grip on the crystals relaxed as the stones began to warm a little beneath my palms, without losing their charge. There seemed to be a surge of energy traveling from the depths of the stones into my hands and arms, and permeating my core. I waited for my instincts to tell me when to open my eyes and tune in to the chatter in the shop. Someone handed me a Styrofoam cup of black tea, which I sipped as I eavesdropped, still enveloped in a haze. A tourist had stepped in, and the rose-colored woman was explaining to him how the crystal chair realigns your energy: good energy enters through the white crystal and bad energy is sucked out through the black one. A Chinese man with a hennaed ponytail was pulling his cell phone from his briefcase, trailed by a long chain of crystals and stones, and placed the whole thing on a cloth to be “cleansed,” another of the shop’s specialties, along with the aura readings and special teas, incense, massage oils, and of course crystals and crystal jewelry, all purported to change your energy. “Who’s that girl who always comes in here, that acupuncturist girl?” the cell-phone man was saying. “Every time I see her I feel like I’m getting a headache. I mean, I have nothing against her, but I think she’s cursing me. Maybe she’s practicing witchcraft on me or something. I mean, I have nothing against her, but last time after I saw her I felt so sick I couldn’t eat.” He rubbed his temples. “Just thinking about her, I’m starting to get a headache.” The women behind the counter laughed and teased him about all his good energy, and the tourist took a sip of his tea and looked around the shop in wonder. “Magic Jewelry, huh? I’ve never been in this place. You guys are so nice!”
Facebook
Twitter
LinkedIn

0 thoughts on “TOUCH: The crystal chair at Magic Jewelry”