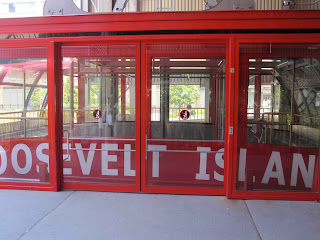 Despite the views and the novelty of an airborne form of public transportation, the thrill of a ride on the Roosevelt Island Tramway really comes down to a single moment: when the tram is suspended over the East River, just before plunging into its port on Roosevelt Island.

As the tram begins its journey from the Manhattan side, there’s the same clutch of inevitability experienced at the start of a roller-coaster ride: you are putting your life in the hands of a metal box on wheels and a narrow track, in this case hardly more than two metal strings looped across the river. But all is smooth, rumbling efficiency as you are scooped up out of the terminal and begin to climb over the rooftops. You feel weightless as the East Side shoreline slips away, a sensation rare among the canyons of skyscrapers you’ve left behind. 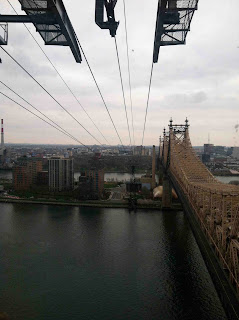 Ahead lies Roosevelt Island: apartment buildings crammed together like too many teeth in a mouth, an unfamiliar breed of buses, narrow streets, outdated shops and restaurants, patches of grass, the rusted blisters of the tennis-court domes, the sinister hulk of the hospital at the southern end. It’s cozy inside; tourists jostle good-naturedly for window space, and even the locals don’t seem to be jaded by the view.

But as the island looms, you realize the tram is going to have to land, and there’s not much space in which to do so. You look around you: what will become of the baby fussing in the stroller, the girl with a tennis racquet poking out of her backpack? To the right are the pink towers of the Queensboro Bridge; to the left is sky. Below is gray green water and white wakes of boats, a slumbering barge or two, some birds, some buoys. 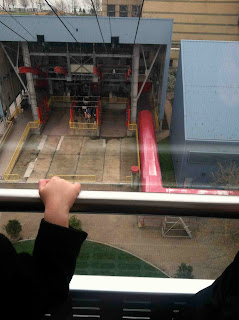 The cables mutter; the terminal is at once so close and so far below. The brakes clamp and tremble, there’s a rumbling above, the whole car vibrates as the tram grips the wires and inches down them, like a child on the bunny slope. You can see the great spools of cables winding and unwinding in the terminal below; the whole operation suddenly seems too rudimentary. In that instant you feel a thrilling buoyancy—and a deep distrust. How can this little red box slip down the cables without crashing? Then the tram bumps and grinds over the top of the support tower and begins its terrifyingly steep final descent. 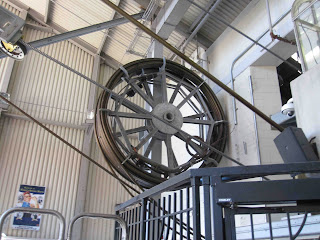 But the tram slows, and somehow, at the end of it all, practically tiptoes into the dock. The doors swish open; your pulse slows. Above the turnstiles is the mechanism responsible for this feat of engineering and vertigo: coppery cable threading through a hole in a Plexiglas window that looks like it was hacked out with an X-acto knife. The power and force rumbling back and forth through that little manmade hole humbles you, like touching a rivet in the side of a skyscraper. 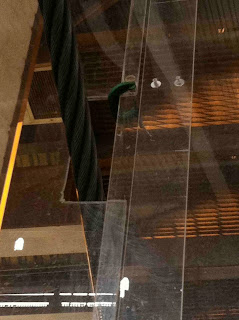