TOUCH: Platza treatment at the Russian and Turkish Baths 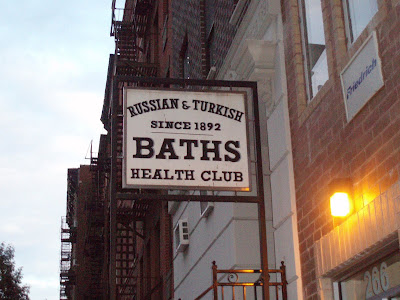 “You are very strong,” Victor the platza man told me moments after I’d emerged from the Radiant Heat Room at the Russian and Turkish Baths, sodden oak leaves plastered to my skin. He draped a towel over my shoulders and pushed me onto a bench, pressing a fingertip to my neck. “Good heart rate,” he pronounced. “But sit still for a few minutes.” My skin felt like it had a pulse of its own: it was throbbing and flushed from the beating I’d received at his hands.

The Russian and Turkish Baths, on East Tenth Street in Alphabet City, are a relic of another era. Founded in 1892, when the city’s poor relied on public baths for hygiene, they’ve made the transition to the twenty-first century with few concessions to modernity. My platza treatment took place in the Russian Sauna, a rock-walled furnace outfitted with cement benches and plastic buckets filled with ice-cold water from continuously running faucets. There was no semblance of privacy: in fact, I had about twelve spectators, ranging from twentysomethings in string bikinis to Hasids with their peyos tucked behind their ears.

Wearing only a bikini myself, I followed Victor into the two-hundred-degree sauna, where he had me lay facedown on a plywood board covered in a thin towel. Since I was on the highest bench, the heat was at its most intense. Within seconds it seared my nostrils. But I was soon distracted by a slippery whack across my upper back, and my nose was driven into the board. Victor tossed a cool wet towel over my head. With each thrash I inhaled sharply, taking in a mouthful of sopping terry cloth. I smelt mildew and the astringent soap mixed with an uncanny scent of autumn leaves. The broom, or venik—made of oak-leaf branches tied with string and soaked in olive oil soap—was softer than I’d expected, sort of like a bunch of rags, but Victor spared nothing in his pummeling. Oak leaves collected in my palms. My pores tingled; time and consciousness were quickly obliterated.

Improbably, with each hit of the venik, I became at once mores anxious and more relaxed: my body recoiled from the intensity of the treatment and surrendered to it. Within minutes, I was limp. Whenever I thought I couldn’t stand it anymore and was about to cry out to be released, Victor threw a bucked of frigid water over me, shocking my body into submission until the heat peaked again. Between beatings he flipped me from front to back and side to side, rubbed my skin with a grainy soap of some sort, pounded my muscles with his fists, and manipulated my limbs into gymnastic contortions, so at one point my legs were bent backwards in an arc almost over my head.

And as suddenly as it had begun, it was over. Victor slapped me on the shoulder and ushered me out the door into the frigid swimming pool waiting just outside. As I dunked my head under and resurfaced, stray leaves—and all the worries of the past week—streamed from my skin, and I stepped trembling onto solid ground, more grateful than I could have imagined.

0 thoughts on “TOUCH: Platza treatment at the Russian and Turkish Baths”