On a recent sweltering summer’s day, I traveled to the northern tip of Manhattan. I crossed the Inwood Hill Park soccer field, took the left fork in the trail, and soon found myself alone in a forest filled with birdsong that might have been heard by the Wiechquaesgeck Indians who, centuries ago, inhabited this woodland—and the caves that lay just steps ahead in the park’s eastern cliffs. 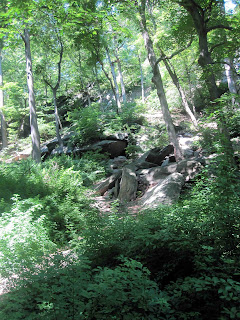 On the Place Matters website, a commenter had recommended visiting the Indian caves on just such a summer’s day “to suck up the cool air that gets thrown out from the caves. It feels like instant air conditioning… free too! It’s a place that transports you to a time, a people and way of life far removed from ours.”

Though I’d been prepared for spelunking, almost immediately I spotted recesses and craggy overhangs in the rocks above the path. In fact, there was a makeshift trail that appeared to wend between them, and a campfire pit at the base, suggesting that the caves were frequented by Boy Scouts, s’mores-toasting tourists—or people in need of warmth and shelter. 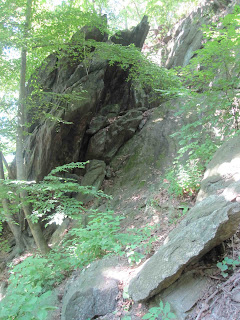 The first cave was wide and shallow—more of a grotto—and emitted no cooling air, just a lazy swarm of flies. I continued up the hill. 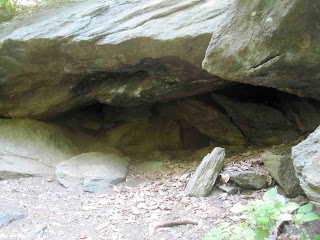 The second cave I came to was deeper and narrower; a Sapporo can glinted in the back. As I ducked in, however, I was struck not by a refreshing rocky breath but by more flies, this time a buzzing horde, which bombarded my face and swarmed around my head. They all but drowned out the birdsong. I recoiled, swatting at my eyes in the sudden bright sunshine. 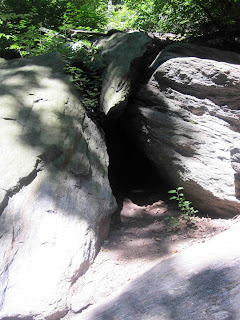 Peeking in again, I saw that the cave walls were indeed studded with flies—the beady, blue-tinged sort. This time I forced myself to linger in the entrance, and soon the swarm subsided. Only then could I appreciate the damp, stony coolness of the air; it felt like placing a clay mask over my face. It smelled thick and sharp. Frayed cobwebs caught the light. Flecks of mica flickered. I noticed candle wax dribbled on a rock by the entrance. 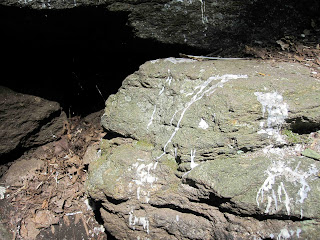 I continued up the hill to the few other caves, stopping to pluck a wineberry from a thorn bush and to perch on a rock in the leafy light, trying to detect an ancient presence. 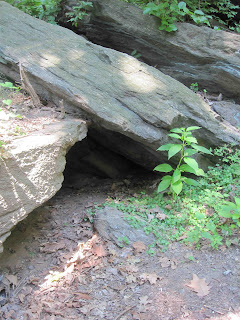 The caves had transported me to a people and a way of life far removed from my own. But it wasn’t the one I was expecting. The air they gave off was less refreshing than spooky. It wasn’t just the flies. It wasn’t just the bread tags, toilet paper, dime bags, and discarded clothing I turned up among the leaf litter. The stories told in their buzzing, swarming, mineral breath were of stolen moments, illicit activities, homelessness, decay: the stories of desperation that lurk beneath so much of our city’s dappled light. 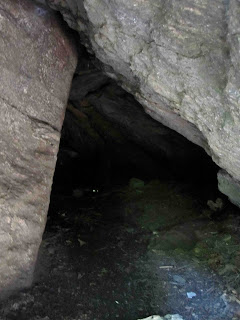