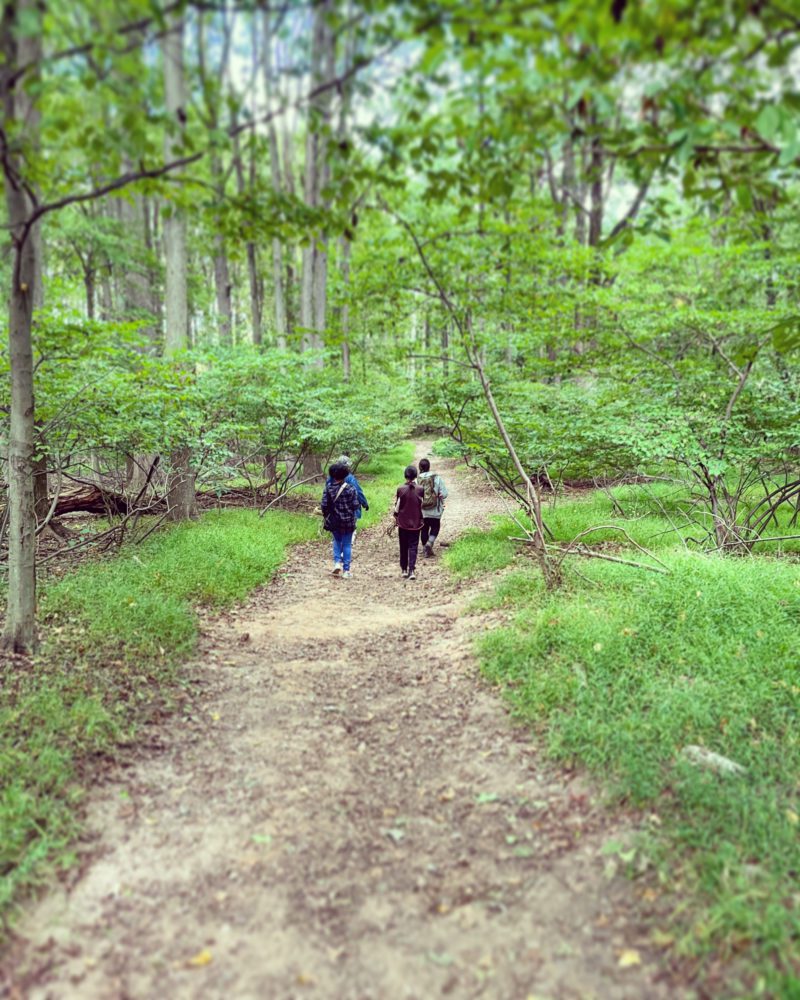 One early autumn afternoon, I hiked into the woods behind Staten Island’s Greenbelt Nature Center, following a group of about ten people and a wheelbarrow loaded with work gloves, clippers, and pole prunters. We were on the hunt for Chinese wisteria, an invasive vine that snakes across the forest floor and climbs trees, strangling them. The plant was not hard to find; in fact, it was everywhere. Our task was to clear a patch of woods of the wisteria and to use the foraged vines to weave baskets—all in the span of about three hours. The workshop was led by Chris and Angel, two of the nature center’s educators. 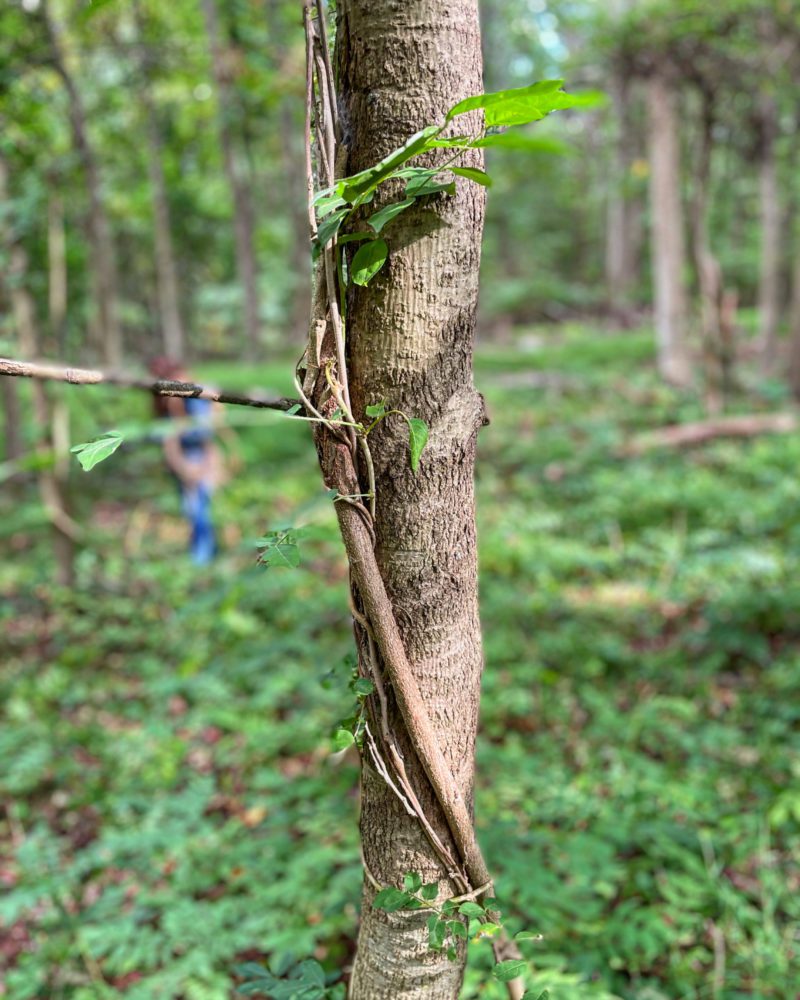 Chinese wisteria can be identified by its counterclockwise twining and its pinnate, tapered green leaves. We needed vines that were about a year old, which would be the most pliable. Their bark was smooth and pale, and the vines stretched taut across the forest floor in straight lines, pinned to the earth by small roots. 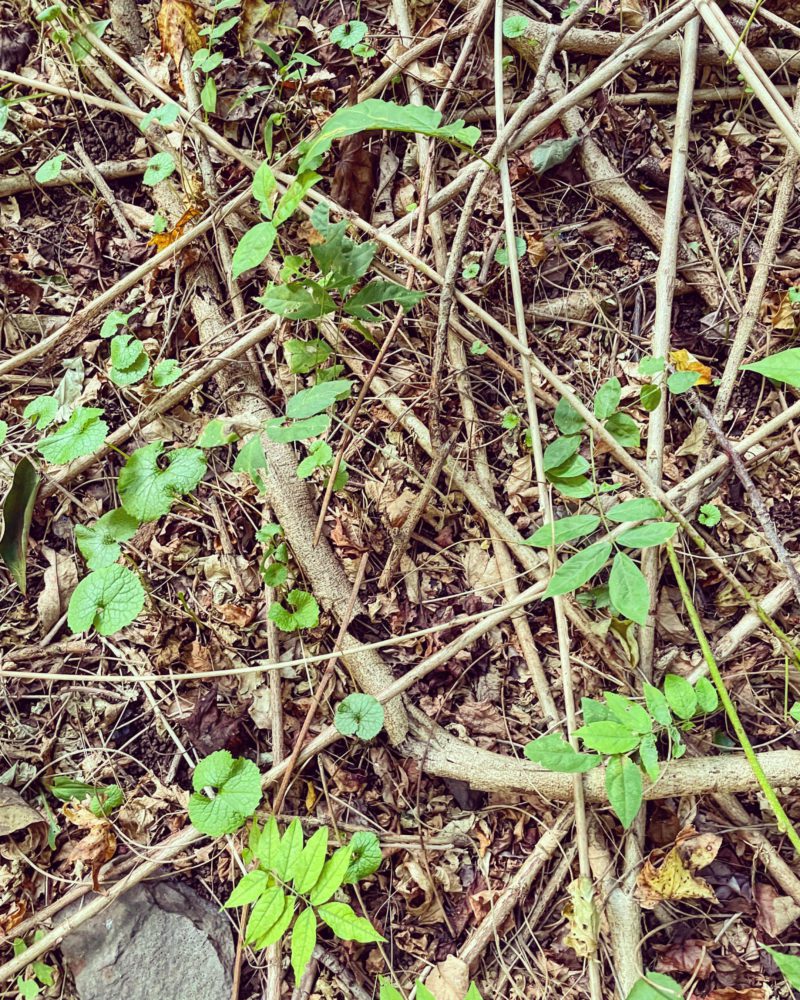 Before we headed into the woods, Chris and Angel had told us the intent of today’s free workship was to teach a creative method of responsible reuse and environmental stewardship, and also to acknowledge the skills and heritage of the Lenape, the original inhabitants of this land. By making a basket from scratch, they explained, we could gain a new appreciation for all the work that goes into simple, useful things. Each participant explained why they’d come. Two teenage girls said they loved crafts and spending time outdoors. A mother with three kids in tow wanted to teach them not to waste and to appreciate what can be made out of things we already have around us. Others said they loved baskets and wanted to learn how to make one themselves rather than buying them at a big-box store. 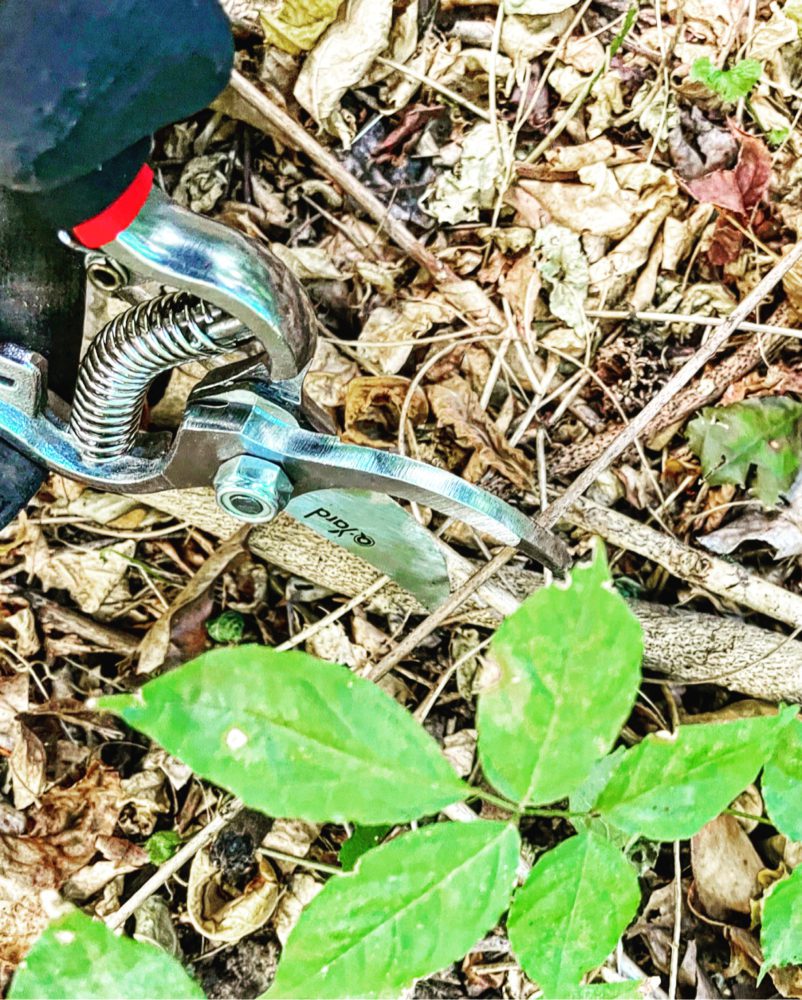 I located my first vine and followed its course across the ground, tearing it from its small roots with a satisfying rips, then snipped it with clippers. 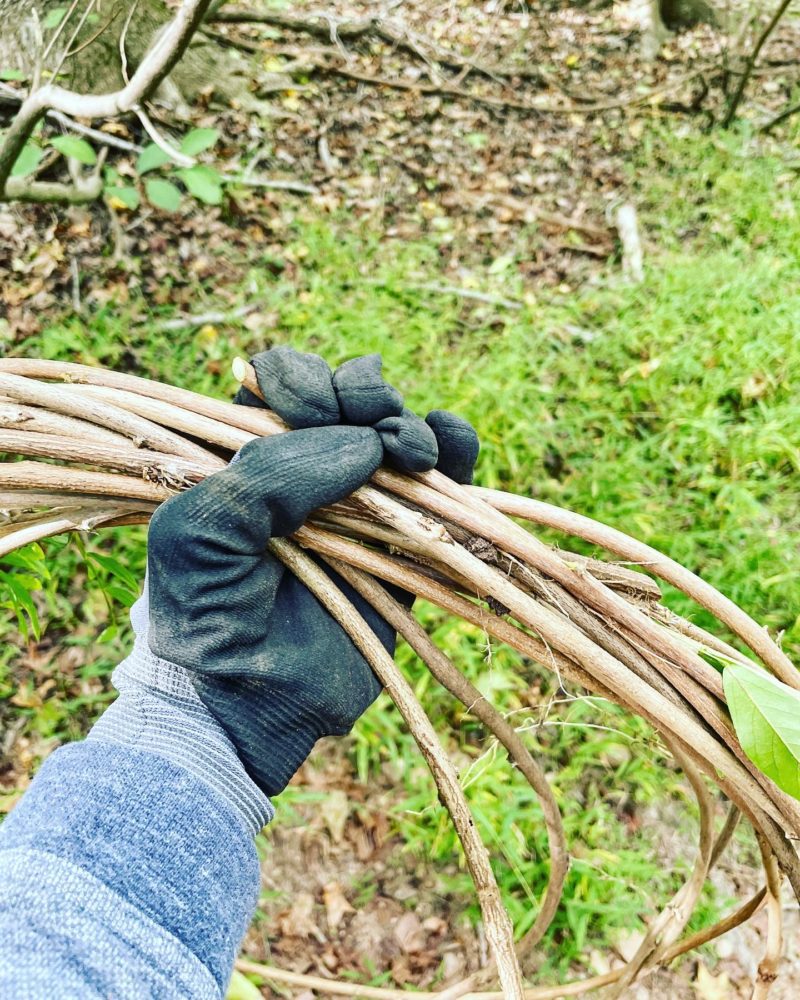 The vine was tough and rubbery in my grasp, with a tensile strength that I could imagine strangling a tree. After cutting the vines to eight-foot lengths, we bent them into a circle, tucking in the ends so we could sling them over our shoulders. 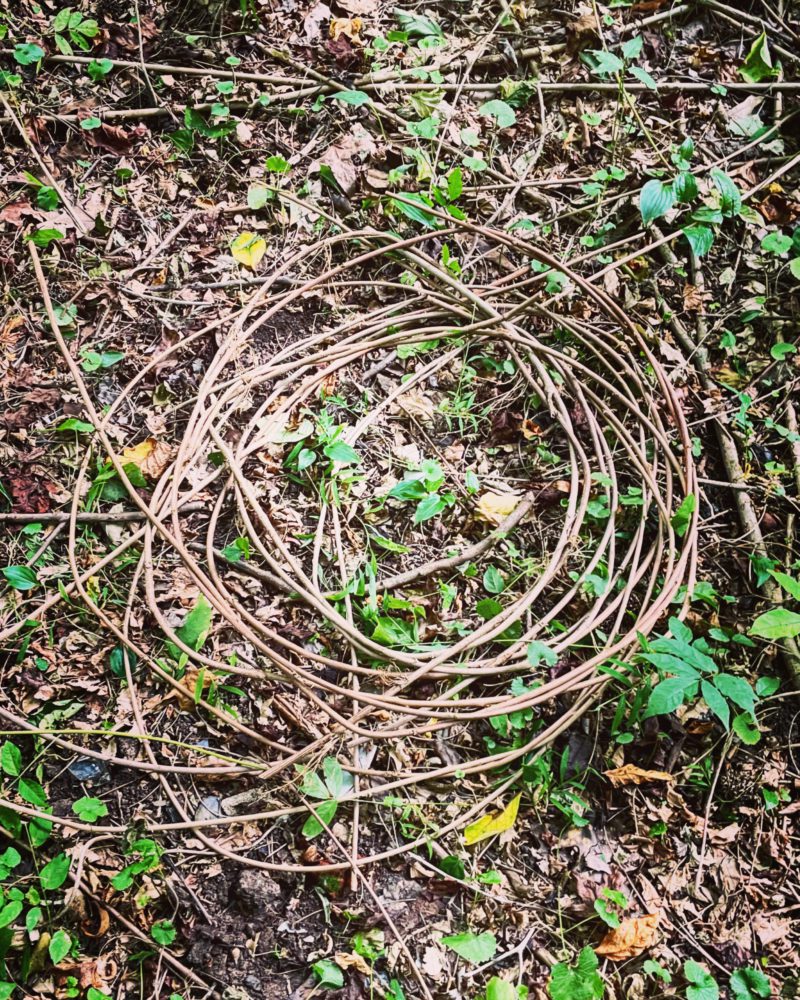 Back at the nature center, the patio had been arranged with tables and chairs overlooking the woods. A pile of thinner chocolate vine, another invasive plant, was laid out for the first few rounds of weaving. Angel told us that the leaves do indeed smell like chocolate. 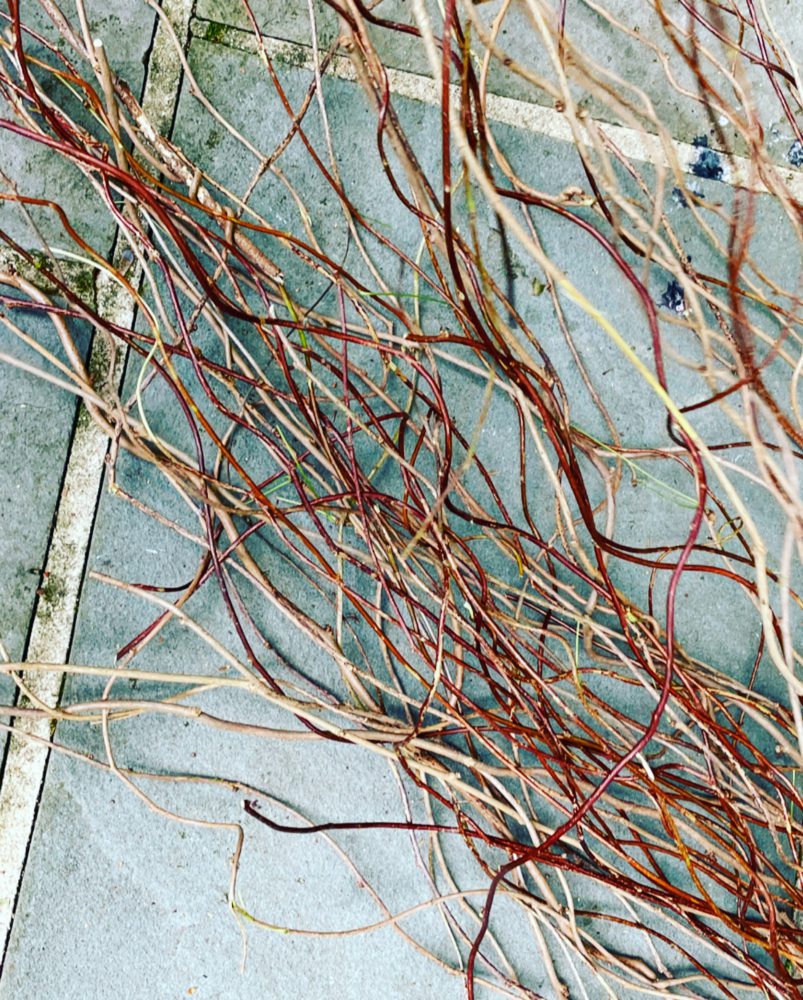 We began by laying two pairs of thick vines across each other, weaving the chocolate vine around to bind them. 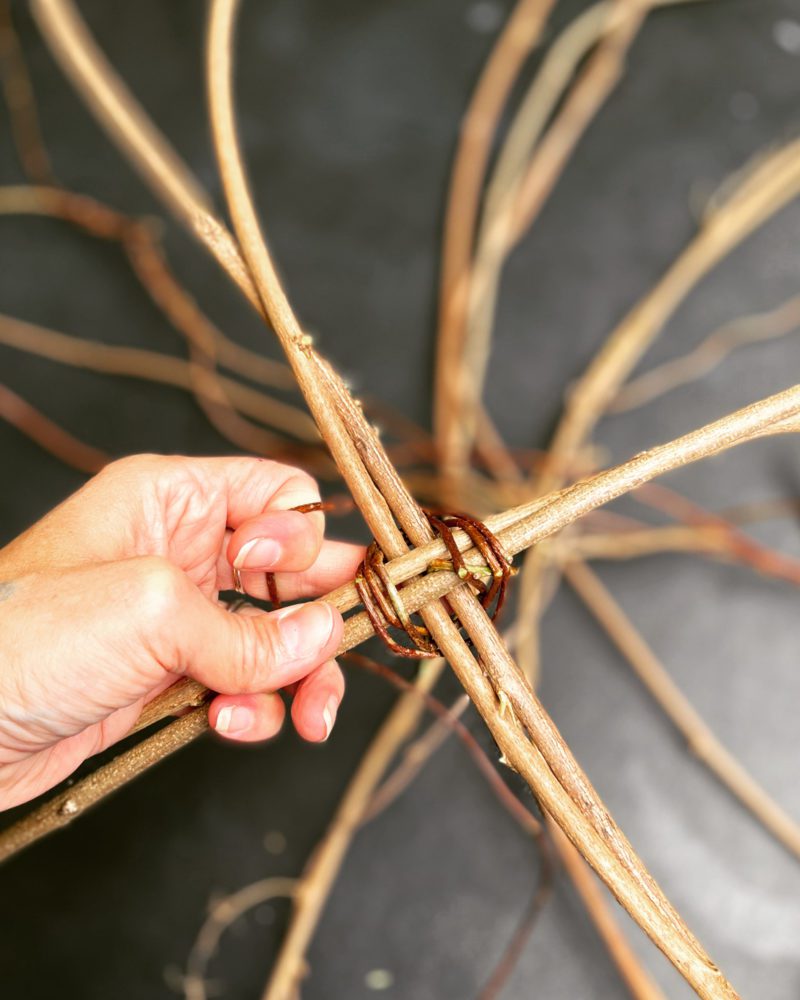 After a few times around the eight prongs of the cross, we jabbed in a ninth prong, so there would be an odd number, making the alternating in-and-out of weaving possible. The nine thick prongs would serve as the warp of our basket: the vertical poles that would support the weft of the thinner vines we’d weave around them. The chocolate vine was slippery and nimble, occasionally cracking as it rounded a bend and revealing a burst of its inner green flesh. 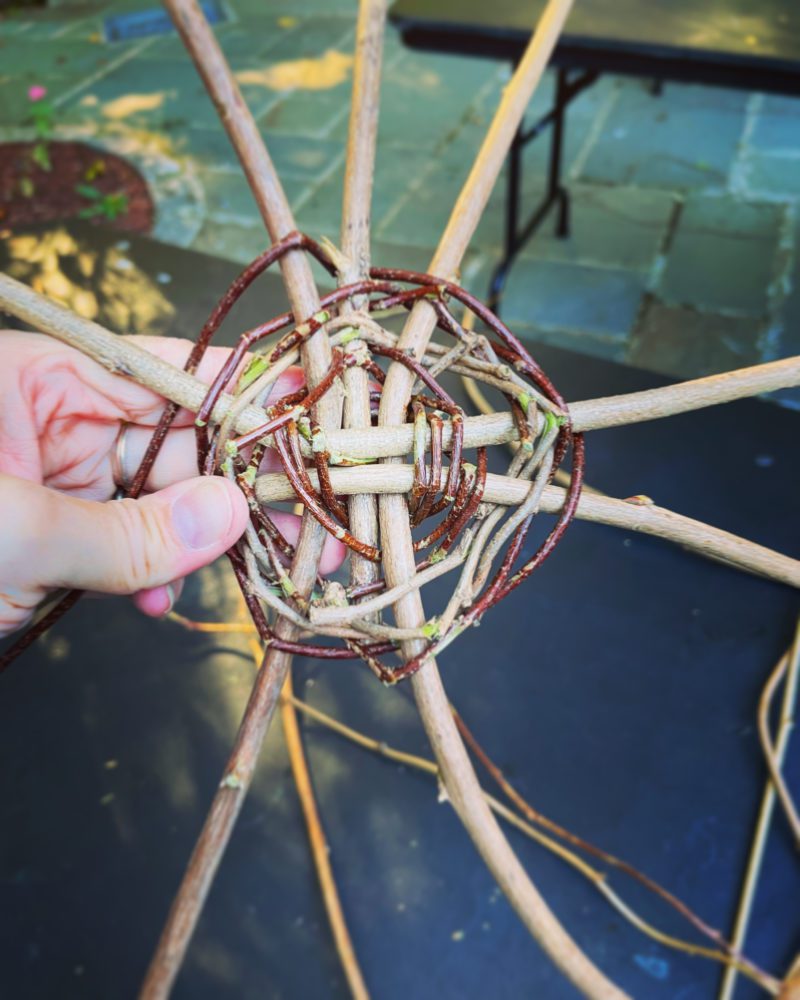 When the circular base was woven, we had to urge the warp vines up, grasping them like a ponytail, so the walls of our basket could begin to rise. I saw my fellow participants wrangling their eight-foot vines, laughing as they whipped around to lash them in the face. 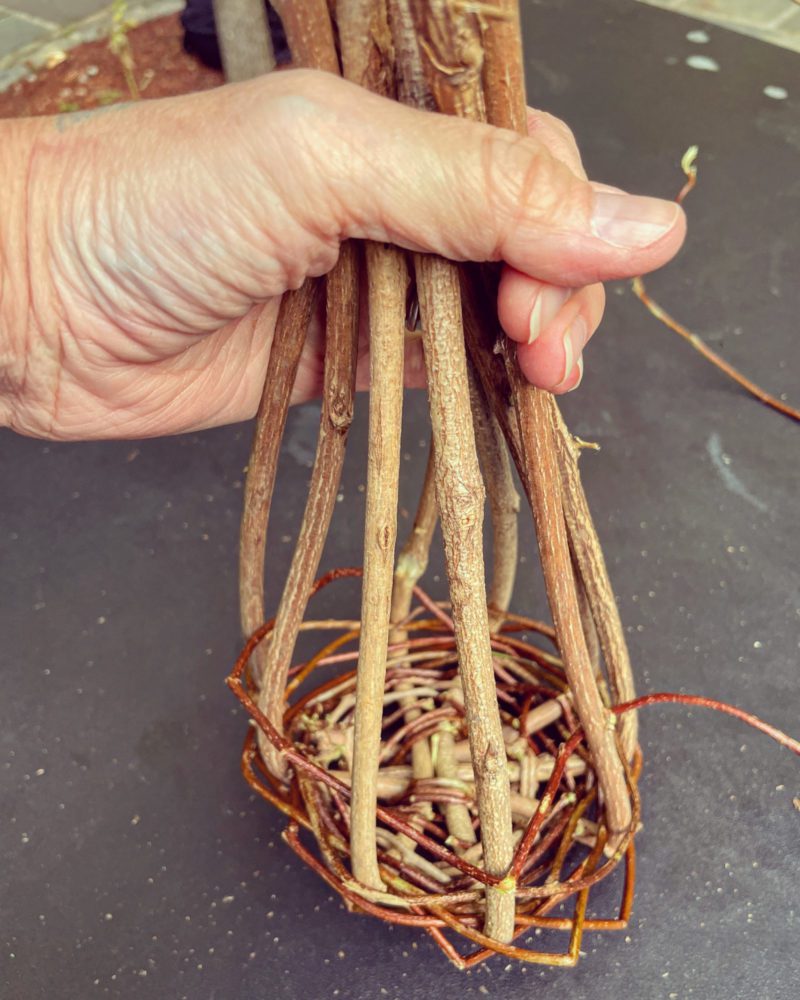 “Let the vines know what’s coming,” Angel instructed, telling us to gently bend but not force them upward—it was more of a gesture than a manipulation. The idea, she explained, was not to work against the vines but to respect their energy, neither dominating them nor letting them dominate us. This was also a metaphor for stewardship: working in balance with the land rather than against it, and respecting the natural materials—even if they were murderous vines. 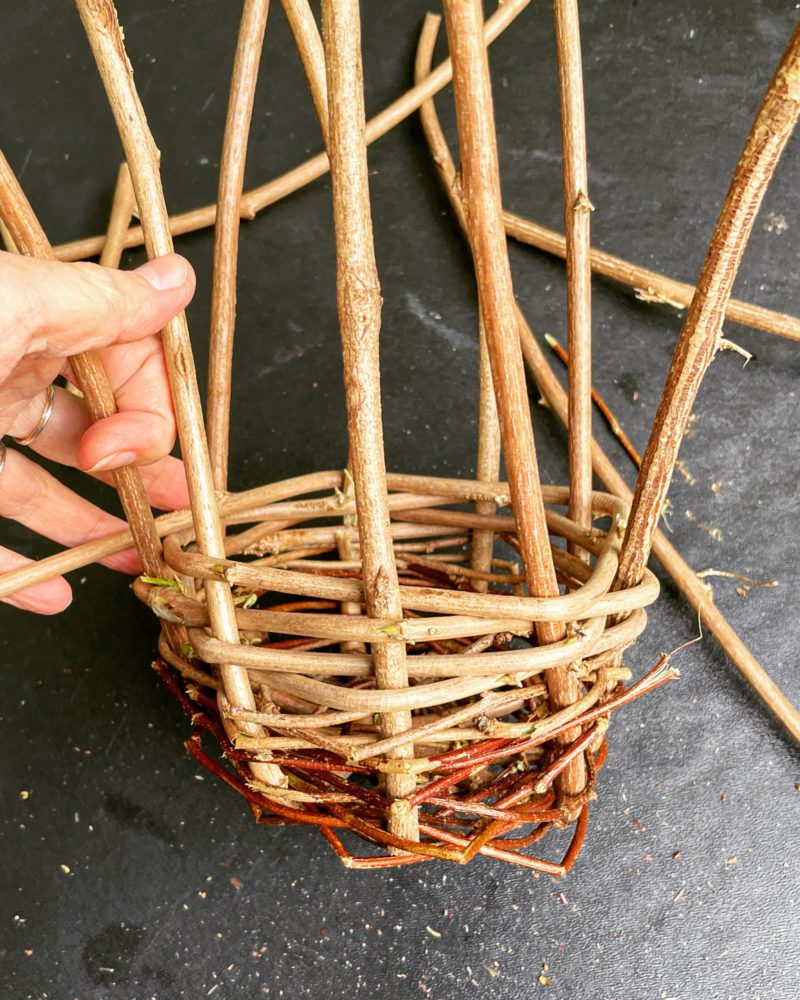 As we bent the vines upward, we pulled the weft tighter to rein them in. Each time one vine ended, we grabbed another and tucked in the ends. “I like your stance,” Angel said, as she caught me with tendrils wrapped around my neck, spinning my burgeoning basket as I got into the rhythm of weaving. “You’re becoming one with the basket.” 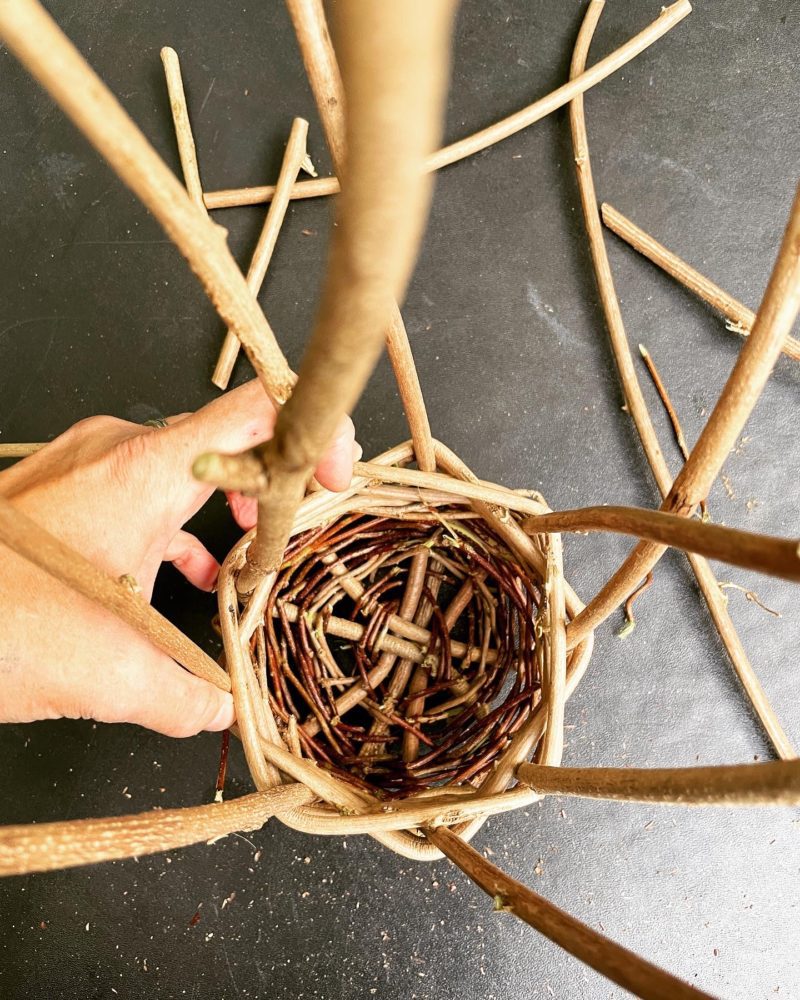 Because the wisteria vines were less pliable than the chocolate vines, each step in the weaving created a straight line instead of a round one, making a series of superimposed pentagons; as the basket grew it resembled a vortex of stars. Looking around, I was moved to see the baskets already taking shape. Some were loose, almost lacy, and wide-mouthed. Others had stripes of vines in different shades. Some were tight and narrow, while others were askew. One had a waist; a few were incomplete; another had a purple flower woven into it. When all the baskets were arrayed on the table, one person commented, “Each person’s basket looks like them!” 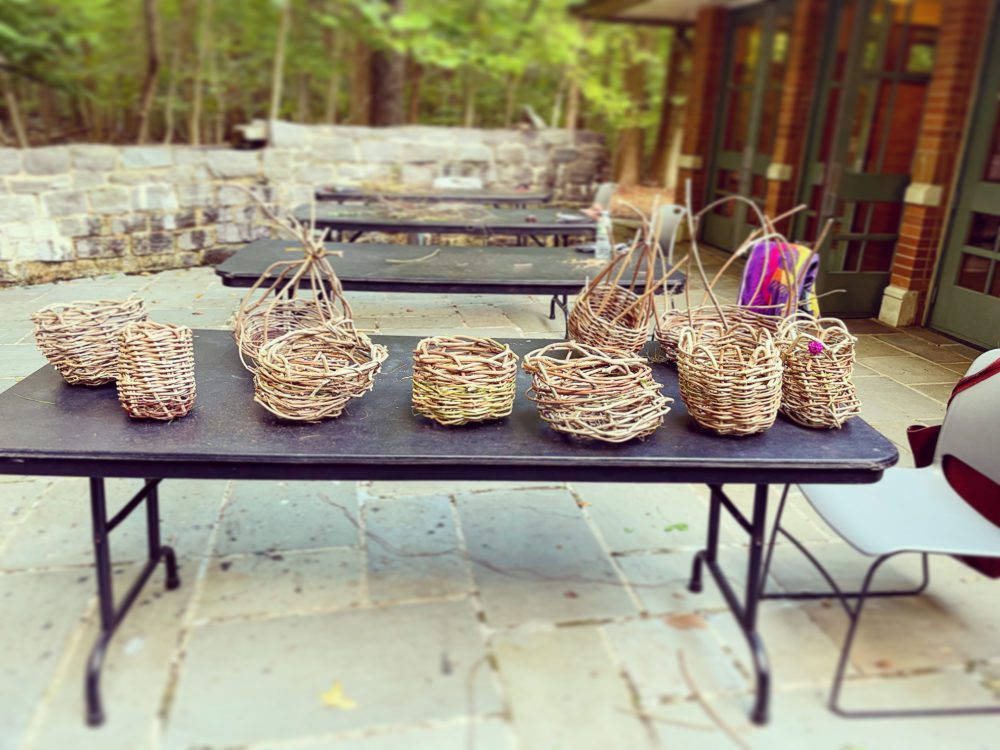 Mine was the narrowest and tightest, but it also tipped over easily: that felt about right. 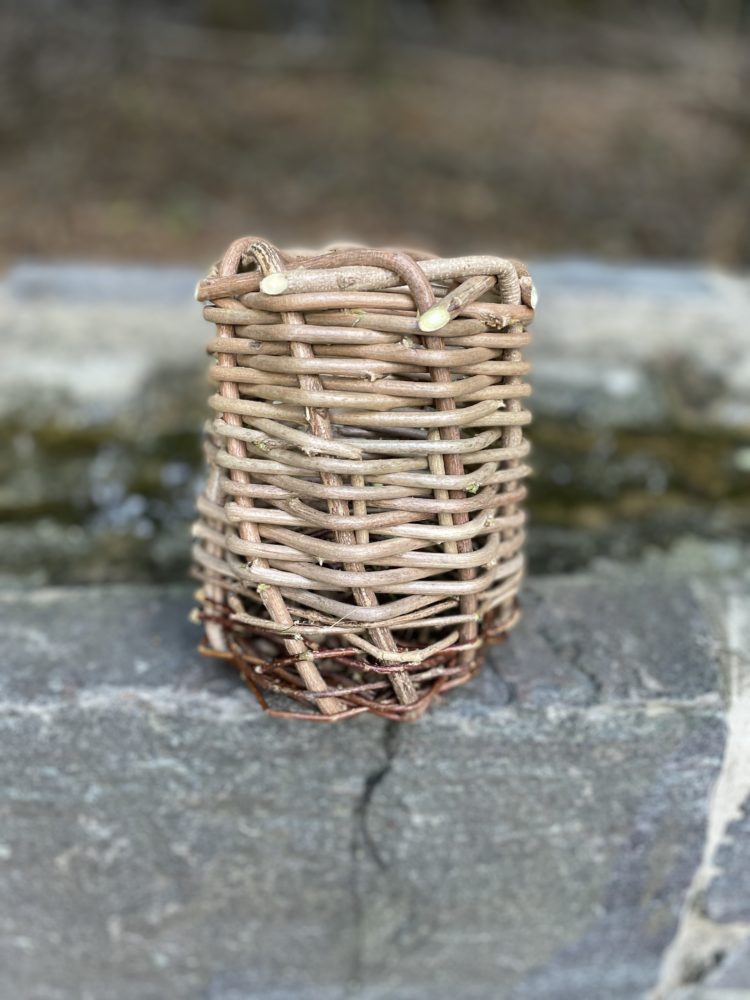 One woman hoisted a ring of vines onto her shoulder and headed for the S57 bus stop.“I hope the bus isn’t too crowded,” she said. “When you get on the bus with a bunch of vines, people should give you some space,” Angel replied. I watched her board the bus with her jumble of local vines, headed back to her urban home, in a paradox as potent as those woven into our baskets: usefulness and invasiveness, emptiness and fullness, destruction and creation.