The Poetry of Everyday Life Blogpost #2

A story. Once upon a time in the old country, there was a tiny town in a wine-producing region of Eastern Europe. The villagers in this region heard that a revered and renowned rabbi was planning to visit their town on a grand tour. So they called a meeting and said, “We must host a great celebration in the rabbi’s honor.”

Then one of the villagers suggested, “Since we all make wine, wouldn’t it be wonderful if we had a wine festival where the rabbi could taste the very best of our wine?”

And then someone countered, “But each family only makes a little wine each year. A big celebration would use up a family’s entire supply of wine for a year.”

So they devised a plan. They put a big oak barrel in the center of town, and every week, just after sundown on Shabbat, every household was to bring a small pitcher of red wine and pour it into the cask. Then, by time of the rabbi’s arrival, they would have a full cask.

In one of the village families, Mendel went home and said to his wife Rebecca, “Listen, you know that everyone is going to be bringing wine, and we’re not a rich family. There’s going to be so much wine in that one cask, ours certainly will make no difference. Why don’t we just fill our pitcher up with water? When I take it to the barrel – I’ll pour it right at the lip – I guarantee you that no one will notice.” And that’s what he did, every week.

Six months later, the big day arrived. The villagers set up a stand in the center of town and put the cask on top of it. Right on schedule, the famous rabbi appeared. The townspeople were all very proud of their village and their wine, and they were anxious to impress the rabbi. They presented him with a beautiful, ceremonial kaddish cup to taste the wine and inaugurate the celebration. He put the lovely cup underneath the spigot, filled it up, and lifted it high.

Suddenly there was a gasp from the crowd: his cup was filled to the brim with water.

This story, told to me years ago by Rabbi David Holtz and published in my book Because God Loves Stories, popped into my head as I sat on the bus on the way to the Women’s March in Washington, D.C. If everyone thought the way that Mendel and Rebecca did, what would that mean for the protests? Perhaps, as my friend Barbara Dyer pointed out, that’s why the election turned out the way it did – so many stayed home and didn’t vote.  It’s precisely that so many didn’t decide to “pour water and not wine” that we saw the numbers we did at the Women’s March and continue to see at other protests, such as those for immigrant and transgender rights. Though many through history have sacrificed more, their bodies and their blood, we all gave a measure of our time.

At the march in D.C. following Trump’s inauguration, I was struck too by the astonishing creativity we contributed collectively to the protests – from the puppets to the slogans and the imaginative signs: “We’re the witches you forgot to burn.” And the chants, this one heard from middle school children marching near the Capital building, “We want a leader, we want a leader, not a creepy tweeter.”

On my way home, my phoned binged and it was from photographer Martha Cooper who had been at the march. “Why don’t we do something with the signs?” She told me about the installation of signs created at the Washington Memorial. 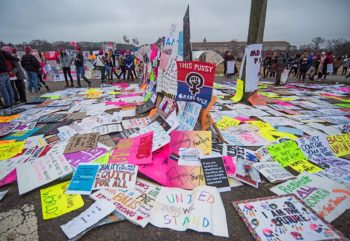 We talked on the phone about how the magnitude and widespread dispersion of the signs and protests across the U.S. and beyond seemed as powerful an outcry as the memorials that cropped up nationwide after September 11th. At that time in 2001, we worked with Martha Cooper to document the memorials and to produce both an online exhibit and an exhibition at the New York Historical Society; 15 years later, we had the opportunity to work with her again. We began to plan an exhibit in the City Lore gallery on the Art of Protest, and we are inviting the public (i.e.: you) to send us images of the signs and your stories to my email below. Let us know, too, if you saved your signs. 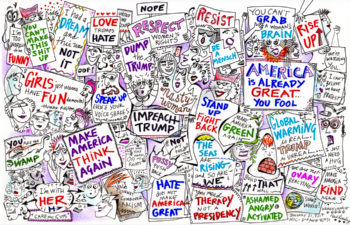 But the first line made me think a little deeper. “If I am not for myself, who will be for me?” You cannot be only for yourself, but we need to find ways to channel our outrage into creative acts that mean something in our lives. We need to do it for our own sake and our own sanity, to avoid becoming depressed, and in that way, let the other side win. We are doing this so our own lives have meaning as creative beings at the same time as we try affect change in the world. The signs and chants represent art for social change at its best, but they also speak to the poetry of everyday life. So do it for yourself, for your army of one – then let it become an army of two and then four, then four hundred thousand. Let us protest creatively.

And so – as it happened in story – my wife Amanda and I decided not to skimp on the wine we poured into the cask. We got on the bus to DC. Because we marched, five hundred thousand marched. Because you did, others did. Three million worldwide…. 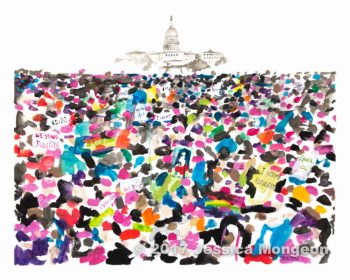