The Fulton Fish Market and the Soul of Naima Rauam

“I take great pleasure in getting to know something really well,” Naima told me,
and having painted the fish market for so many decades, I feel I really do know it well. I know the nuances of fish, of building interiors, of light and how it falls on fish, how everything sparkles, how shadows swallow up a journeyman. I feel my soul resided there and when the market left the Seaport in 2005, dang if my soul didn’t go with it. . .
Some would argue that the soul of a sentient being is an invisible ray of light illuminating the darkness of one’s inner self.  Others believe the soul has no shape but takes on the forms of places and people we internalize, connect to, and love. Unbeknownst to her, Naima Rauam’s journey of the soul took her from the Art Students League to the Fulton Fish Market in 1966. 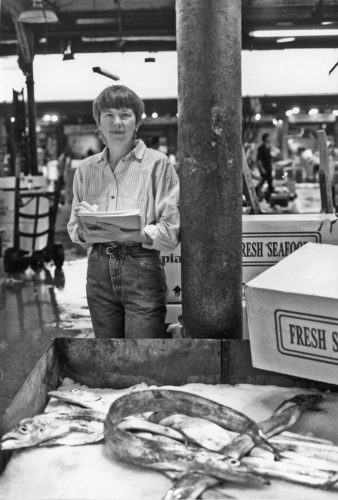 I was studying at the Art Students League and had a class assignment to bring back an action painting. Someone said, “go to the fish market, there’s lots of action there.” SO I climbed on the subway and thought, gosh, all the fish are dead – there’s no action there. But I had already invested my fifteen cents on train fare, so I continued.  As I walked down Fulton Street toward the fish market, I encountered the most amazing activity.
Naima began painting the fish market at the age of 20, and when she settled permanently in New York, she moved first into the adjoining fish smokehouse on Beekman Street where she “slept on the floor between my bicycle and computer, and my easel and art supplies. Outside I could hear all the guys in the morning and throughout the night, yelling and screaming and doing their fish thing.  To me it was just a lullaby.” Later she moved her studio into the Market’s fabled Tin Building.
When the smokehouse was sold, I went to live on the Lower East Side. I would walk to my studio in the middle of the night, through dark and silent Chinatown, toward a distant glow, which was the market. I could hear a little bit of the activity as I got closer, and then, the roar as I came upon it! It was wonderful. I could be dragging, having roused myself from sleep at three o’clock, but when I got to the market, its energy electrified me, and I was eager to get to work, to sketch and paint, and be part of the market.

The market had a nightly rhythm to it. In the evening, I saw dark streets and the night sky of course, with just a few bits of light here and there. Perhaps a second floor office was illuminated, or one storefront fish stand had some lights on. Then, little by little, more lights would go on, and by 1 o’clock in the morning the place was ablaze with spotlights and rows of fluorescents. Intense light was focused on the fish and the work areas, while just a few feet away there was darkness. It was so interesting to see… the journeymen, for instance, load their hand trucks in brilliant light, and disappear with them into utter darkness. 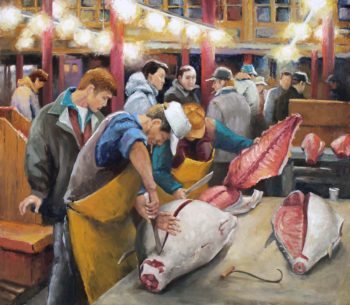 There was also ebb and flow to the activity, and every night was different. You never knew what the seas and rivers would yield, nor how much. Different fish, new displays, stacks of crates without rhyme or reason, these were fodder for my artwork. Every night I’d see new compositions for paintings. I couldn’t draw fast enough, couldn’t take enough photos, but I tried. I wanted to absorb everything about the market, the way it functioned, the way it looked –its color, its light. It was the light that really impressed me so much so that, now with the market gone… I’m more sensitive to light in New York City now, and sometimes I walk around or drive around town at night just to visit the light.

After years of talk, Mayor Giuliani finally managed to extricate the Fulton Fish Market from its moorings at the South Street Seaport. In 2005, the market moved to a new warehouse-like facility at Hunts Point in the Bronx. “I go up there, and while I’ve done a handful of paintings, it’s hard to find inspiration. Downtown, in quirky little spaces cobbled together over 183 years, you had the likes of Al Fish and Joe Tuna dishing out their versions of the fish trade. In the new place, it seems like just so many guys in dark jackets swallowed up by one immense space of white walls and white lights. Downtown, the fish market was a way of life. It had a soul. In the Bronx, it’s just a business. So I say to myself, “well heck, I’m going to keep painting the old fish market. . . . Perhaps that’s my purpose now, to keep the memory alive of what it was downtown.”

Monet had his water lilies; Toulouse Lautrec had the Moulin Rouge; Naima Rauam has the Fulton Fish Market.

For Dick Zigun it was Coney Island, where he opened his theater and sideshow on Coney’s fabled Boardwalk in 1981. A friend, Kathryn Adisman, once said to him, “I love that place.”
“I am that place,” he answered. 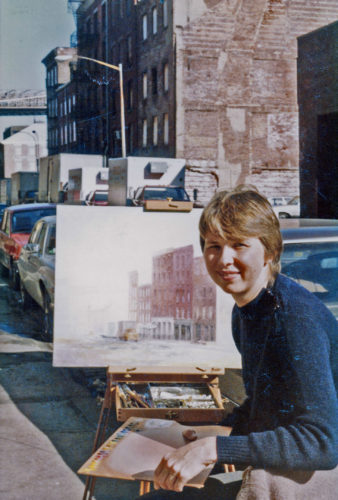 When we are in the places we truly love, perhaps our deepest selves find their bearings and can sense their own presence in place. This is the place where I am who I am – I can sense who I am in the world through this place.

Beneath the images of the fishmongers with their hand trucks and what Naima calls the fish cutter’s “ballet of the hands,” lies an interplay of darkness and light, sparkle and gloom in the deeper and unseen arena of the soul. The fish sellers were scurrying about their daily hustle, but Naima was seeing the darkness and light, their shapes as they worked. They too could see it when they looked at her paintings, which a number of them purchased and others commissioned. There is something deeper going on below the quotidian that art has the power to beautify. From the bits and pieces of the urban environment that reflect the light within us, we create an architecture for the soul.

Naima put it more comically, “My Raison D’Etre is a cod.” Fillet of soul. 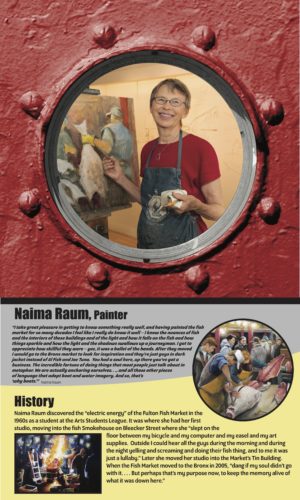 Naima is part of an exhibit, Waterfront Heroes, cosponsored by City Lore, Long Island Traditions, and Staten Island Arts. If you feel about a place the way Naima feels about the Fulton Fish Market, please write to steve@citylore.org.  Photo by Tom Pich.