TASTE: Waffles with jam at the Norwegian Seamen’s Church

On a recent afternoon, I stopped by the Norwegian Seamen’s Church in Midtown, not for religious services or to consult a nautical chart, but for a traditional snack of waffles and jam served with coffee. 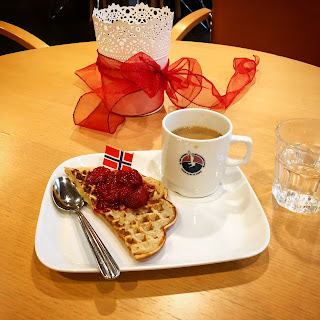 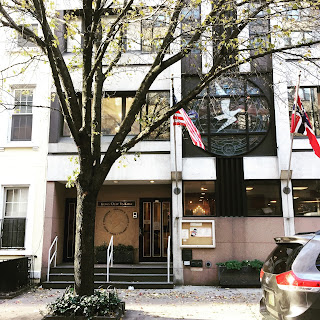 One could be forgiven for being uncertain if the Norwegian Seamen’s Church—housed in a modern building on tree-lined Fifty-second Street—is a church or a café. Though the vaulted main room features a beautiful, light-filled nave overhung with a model schooner, most of the space is filled with round tables set with candles in Scandinavian luminaria. 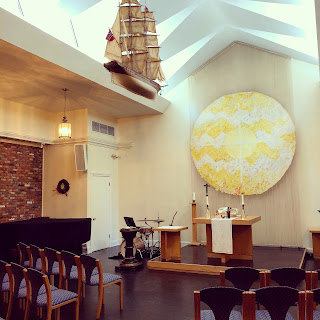 On this afternoon, however, the chairs in the nave and around the tables are empty, but I hear a buzz of conversation from the back of the room, where a family from Florida is eagerly perusing shelves stocked with Norwegian foods—and a certain floor cleaner called Krystal, whose pine scent, I am told, reminds Norwegians of home. 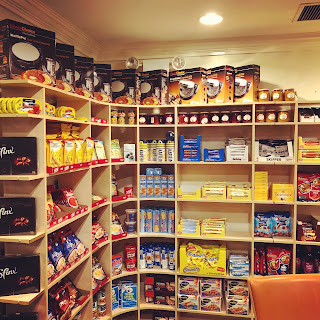 As it turns out, though the international nonprofit organization of Lutheran churches was originally founded to serve Norwegian seamen living abroad and at sea, and though it continues to offer weekly church services, its twenty-nine churches have evolved into social and community spaces for Norwegian expats (and curious interlopers). 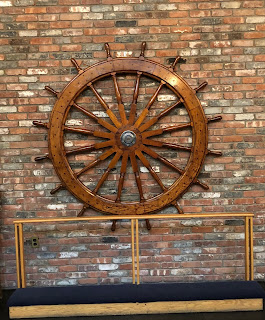 Despite the nautical decorations (a church kneeler abuts a giant wooden ship’s wheel in one corner) and racks of Hjem magazine (hjem means “home” in Norwegian; the publication appears to cater to Norwegian seamen), few sailors swing through the doors these days. Chaplains do still visit Norwegian oil rigs stationed in the North Sea, however, so the organization has kept true to its nautical mission. 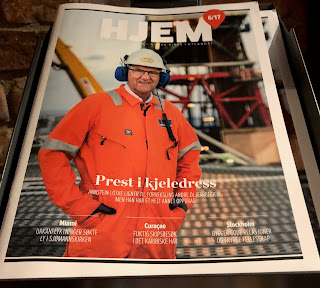 When I inquire about the famous waffles, an affable blonde named Anya, wearing a pink sweatshirt, disappears into the kitchen and returns a few minutes later with a plate of several warm waffles covered in a cotton towel. She tells me the waffles are always heart-shaped to symbolize Norway’s heart reaching out to its countrymen. I spoon on a dollop of strawberry jam and pour a mug of coffee and cream, which she says is a traditional accompaniment. 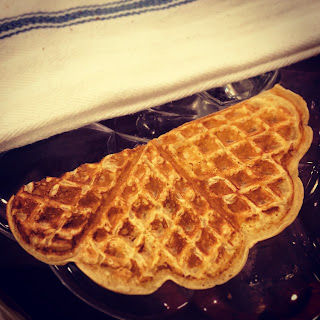 Just then, a man in a striped sailor shirt with swept-back gray hair approaches me, and I think perhaps I’ve chanced upon a genuine Norwegian sailor. As it turns out, he is the church’s hospitality director, Jan. He follows me to one of the candlelit tables, where we chat as I dig into my waffles. Or, rather, I mostly listen and focus on the waffle, which is warm, spongy, and thin, with the church’s proprietary notes of vanilla. The tangy aftertaste, Jan explains, is from sour cream, and it’s balanced by the sweet clumps of whole strawberries in the jam and sips of the bitter, creamy coffee. At the church’s annual Christmas fair, which I’d attended, the waffles are served with sour cream, which adds a cold, creamy swirl to the jam. 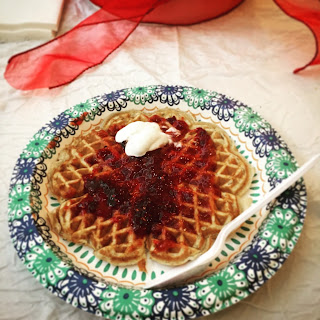 As I spear tiny pieces of waffle with my fork,  Jan tells me that he will soon return to Norway to live on a farm with his family. Life there will be very different from New York, he muses, gazing toward an abstract painting the wall. Our conversation drifts to the popular Norwegian trend of slow TV: seven-hour one-frame shots of fires burning or train trips through the mountains. “Sometimes we need more of that—the slowness,” Jan says. Silence settles between us, and I wait for him to continue. For a few moments, the only sound is the hum of the overhead lights. I realize this is the kind of palpable silence rarely found anywhere, much less in New York and between two strangers. We both look at the abstract painting. When I stare at it long enough, the shapes resolve into two ships crossing a sea. 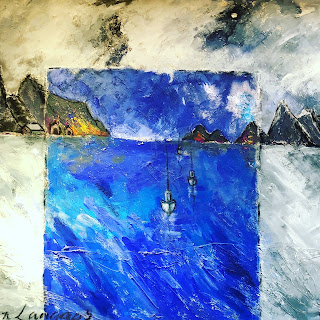 I exit past the gift shop, where I notice heart-shaped waffle irons and waffle mix are among the offerings. I wonder if Jan will take some with him when he returns home. 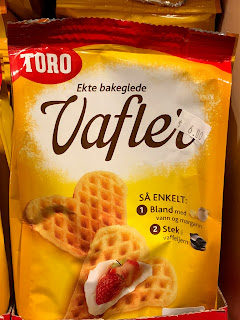