What’s the deal with papaya drinks? They’re available all over Manhattan, flashing in neon from corner shops—but does anyone drink them? Paired with a hot dog, they form an iconic if unlikely salty-sweet NYC combination, but does any New Yorker order a papaya drink on its own? 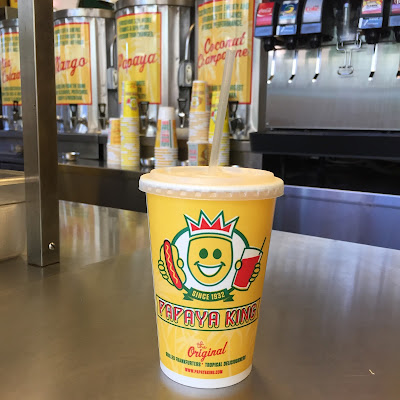 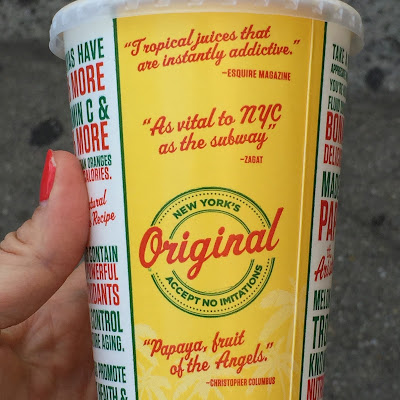 One recent afternoon, I set out to the visit the spot where, allegedly, the papaya drink was born: the corner of Eighty-Sixth Street and Third AvenuePapaya King. 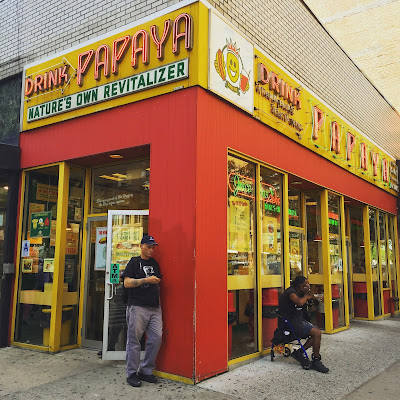 The eighty-five-year-old Papaya King shop is paneled in tropical bamboo and as narrow as a hot dog in a bun. At 4 p.m. on a Saturday, customers were spilling out the door. 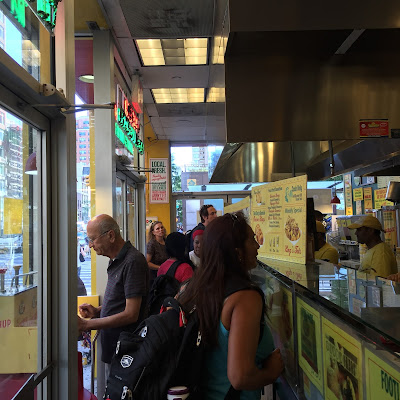 Signs touted papaya’s superlative health benefits: “Nature’s own revitalizer!” “Vitamin packed, health giving!!” “The aristocratic melon of the tropics… the famous magical papaya melon!” “The king of all drinks!” “Fruit of the angels!” Even the door handle is inscribed with a melon mantra. Yet does anyone order a papaya drink? Nope. Hot dogs all around. 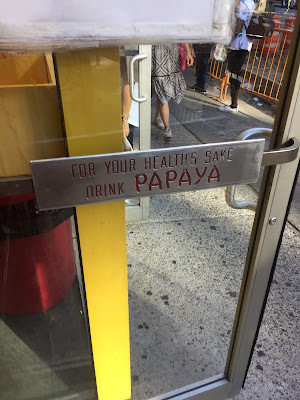 The guy in line behind me has brought a friend from Texas to Papaya King to indoctrinate her in the city’s hot dog scene. “A real New York treat,” he promises. Noticing the shop’s battalion of shiny steel drink dispensers as if for the first time, he says, “Hmm… tropical drinks! What kinds do you have?” The counter guy recites a litany of tropical fruits with “papaya” folded right in. “Banana-coconut-grape-lemonade-mango-orange-papaya-piñacolada-strawberry.” “Lemonade,” the guy decides. “Everyone likes lemonade.” Papaya strikes out again. 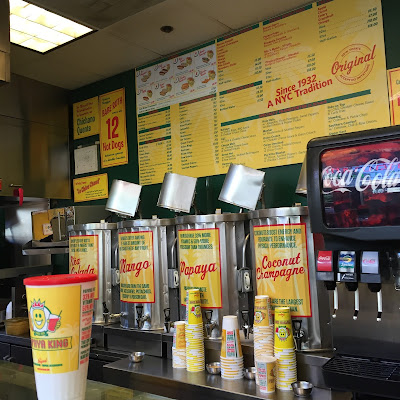 Papaya King, after all, was born not because of hot dogs but because of papayas. The founder, Gus Poulos, fell in love with the tropical melon in Miami, on his first vacation after arriving on Ellis Island from Greece and working his way up the ranks of a Yorkville deli. Back in the city, having procured some papayas, Gus sold his deli and opened New York City’s first juice bar. He was disappointed to find that his fellow Yorkvillians weren’t as enthusiastic about papaya as he was, however, so he enlisted the help of girls in hula skirts to hand out free samples on the corner. That was all it took: his papaya drinks became a local sensation—and without the help of any hot dog! It wasn’t until many years later, when he met a German American woman named Birdie, who introduced him to Yorkville’s German food scene, that the frankfurter—and romance—came into his life, and two classic New York City combinations were born: a love story between two recent immigrants, and hot dogs and papaya juice. 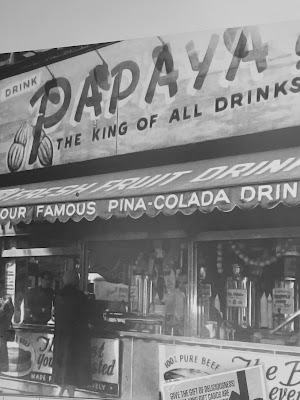 The papaya drink—which is not simply papaya juice—is foamy, creamy, and sweet, offset by a faint tang, and it’s the perfect temperature: chilly but not teeth-jarring. The light froth offsets the heavy creaminess. As a sip lingers in your mouth, it feels almost pillowy. It’s a friendly flavor, but with an exotic, melony edge that lends it an air of mystery. Though I was initially suspicious of the ingredients, thinking the modern incarnation of Gus’s juice must be pumped up with fillers and preservatives, the recipe (per an email with the company) is refreshingly simple: papaya purée, sugar, dry milk fat, citric acid, and water. 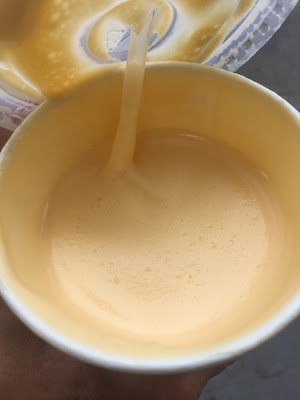 As I linger in the doorway of Papaya King, pushed out by the crowds, I see a little boy leaning his head against the open door across from me, sipping from a cup. When I see the pale yellow-orange-pink color shooting up his straw, I know what he’s drinking, and I try to give him a meaningful look as I take a sip from mine. It feels like we’re sharing a secret that’s hidden in plain sight.