One Wednesday in April, Häagen-Dazs took over a vacant former bodega on an East Williamsburg side street and turned it into a free immersive pop-up experience to celebrate the debut of the brand’s new flavor line inspired by urban street foods. Two of the new ice creams, Black and White Cookie and Dulce de Leche Churro, are tributes to iconic local treats. The pop-up was a spot-on re-creation of a typical corner bodega, with a final Brooklyn-hipstery surprise. 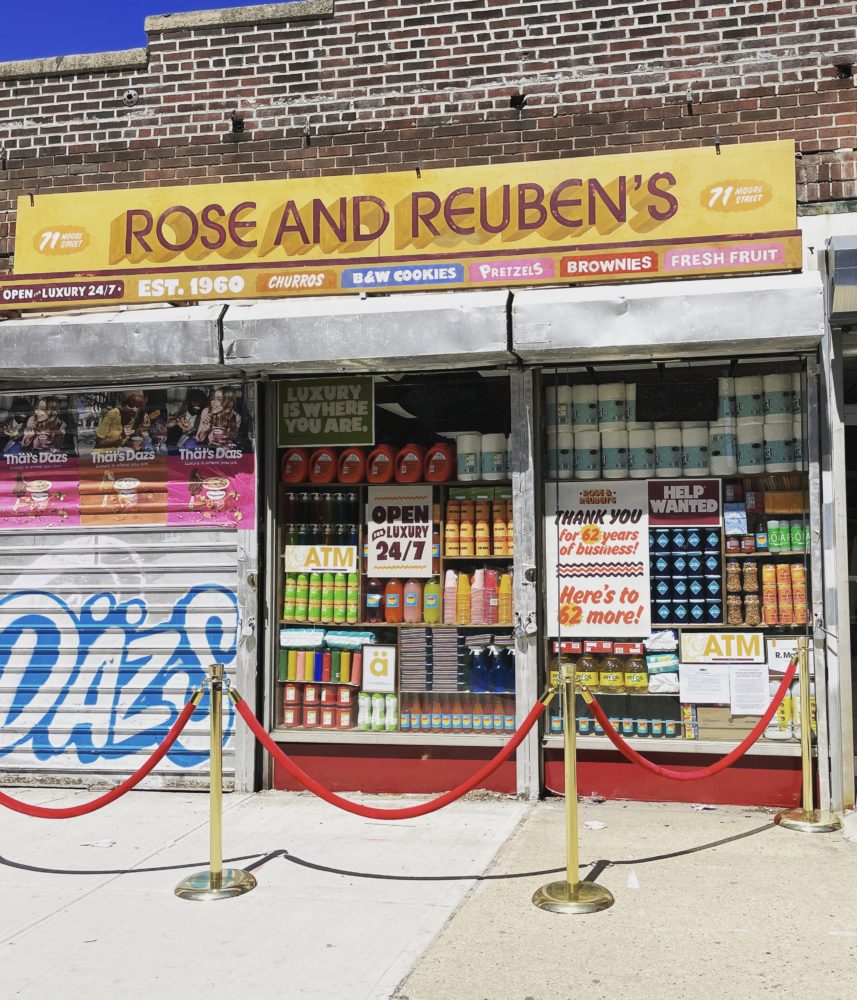 Some might not know that Haagen-Dazs itself is a native New York brand, born in the Bronx sixty-two years ago by husband-and-wife team Rose and Reuben Mattus, Polish Jewish immigrants after whom the bodega pop-up was named. Like any good city bodega, the windows were lined with a jigsaw puzzle of lurid everyday items, stripped of their real-life brands but nevertheless recognizable: kitchen sponges, votive candles, cat litter, detergent, liter sodas, canned peas, roach killer. There was even a classic oval LED sign flashing “Coffee” and tongue-in-cheek paper ads pasted to the window. 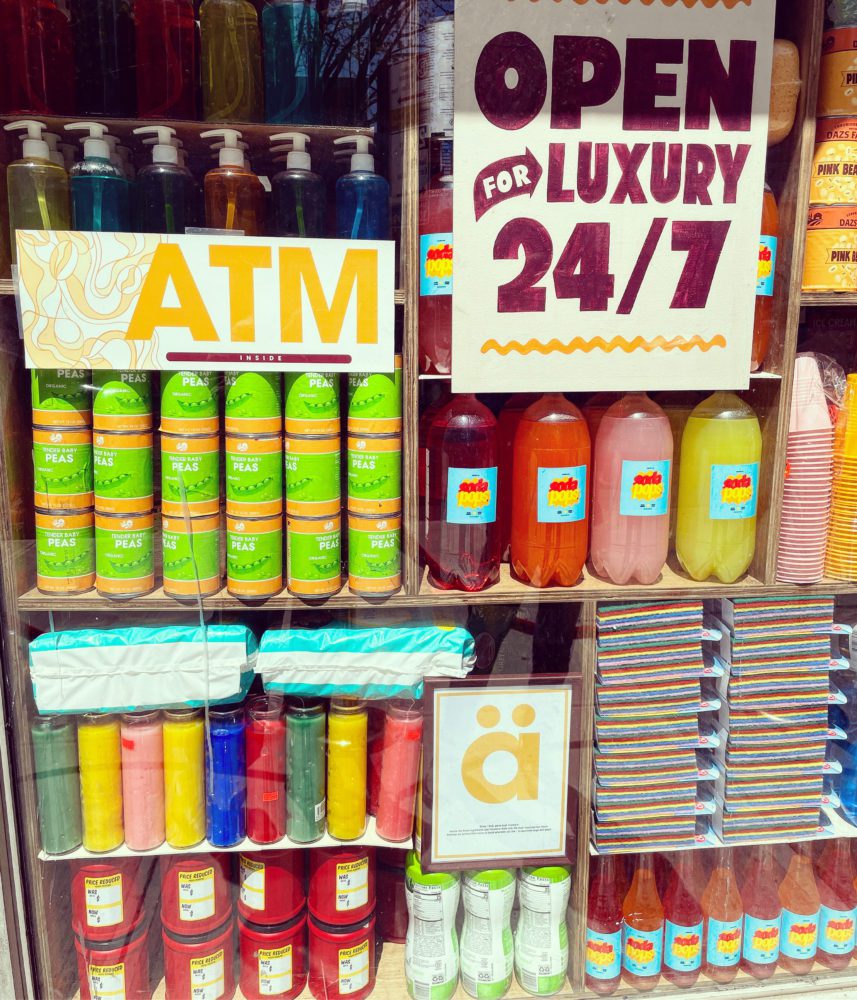 Though most bodegas don’t have a line to get in, there’s something classically New York about standing behind a velvet rope and being sized up by a bouncer, complete with a black hoodie, flashing gold jewelry, wraparound sunglasses, and a walkie-talkie. “Have a blessed time,” he said as he ushered us in. (The clientele also appeared to be all local, not a tourist in sight.) Inside, visitors were greeted by boxes of fruit impaled with the ubiquitous neon starburst signs on skewers. 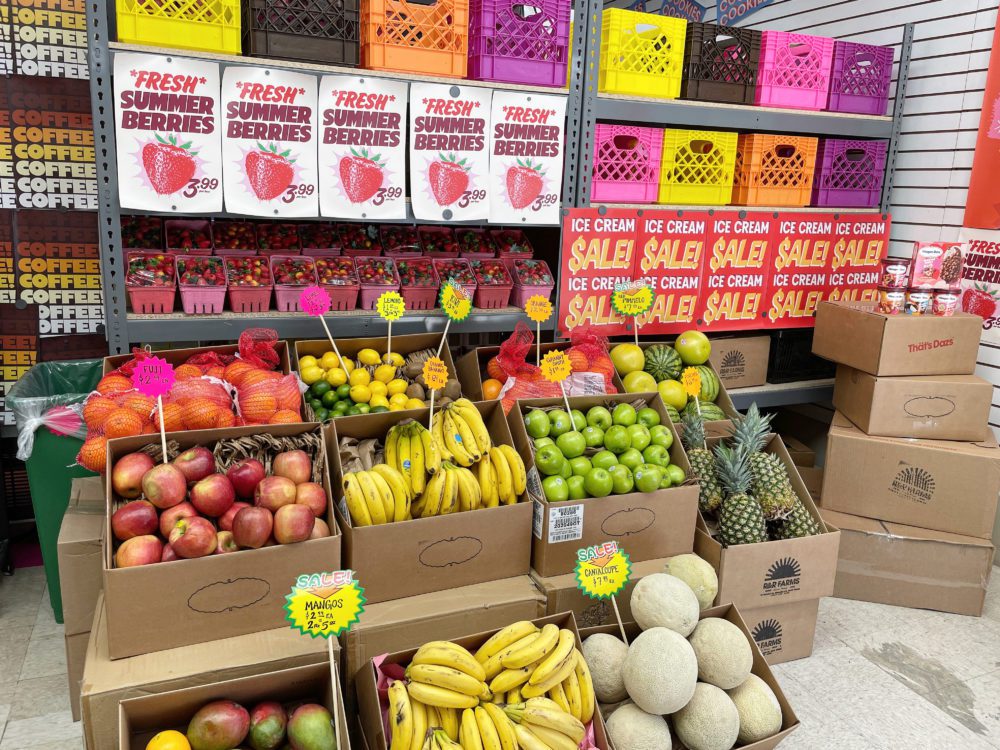 The scuffed linoleum floor and sagging ceiling with fluorescent panels notwithstanding, the checkout counter was perhaps the most authentic part of the installation, with its only–in–New York array of necessities: phone chargers, sewing thread, lightbulbs, petroleum jelly, candy, plastic sunglasses, aftershave, lottery tickets-even a plastic tub of pickles and a new-business dollar bill scrawled with “good luck” and taped above the register. 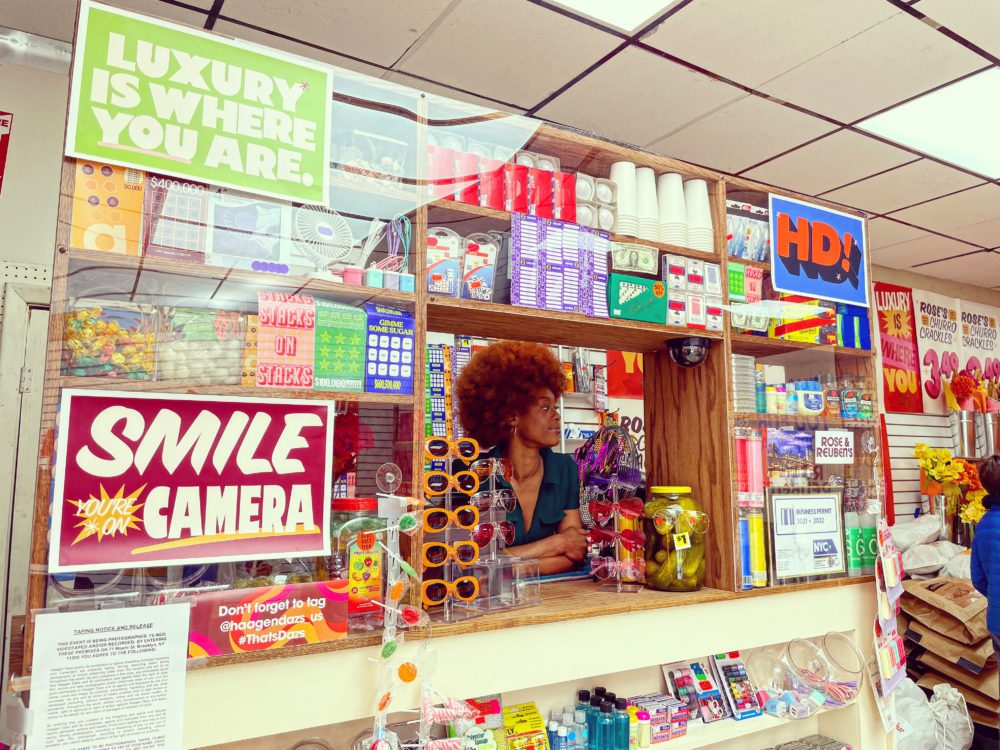 Alas, there was no cat. But in one corner was a gray plug-in ATM with a Xeroxed flyer for a local missing cat, complete with a row of tear-off tabs with a phone number. 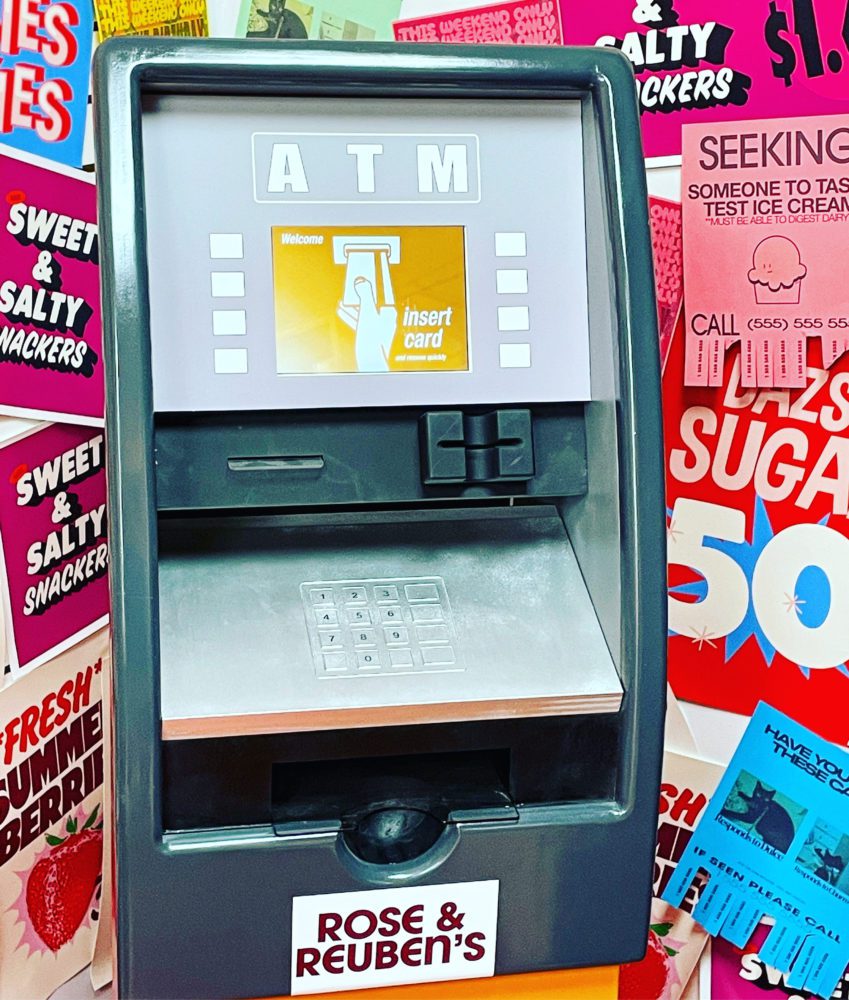 The first hint of sweet treats came with the floral arrangements, which had churro sticks stuck into them. 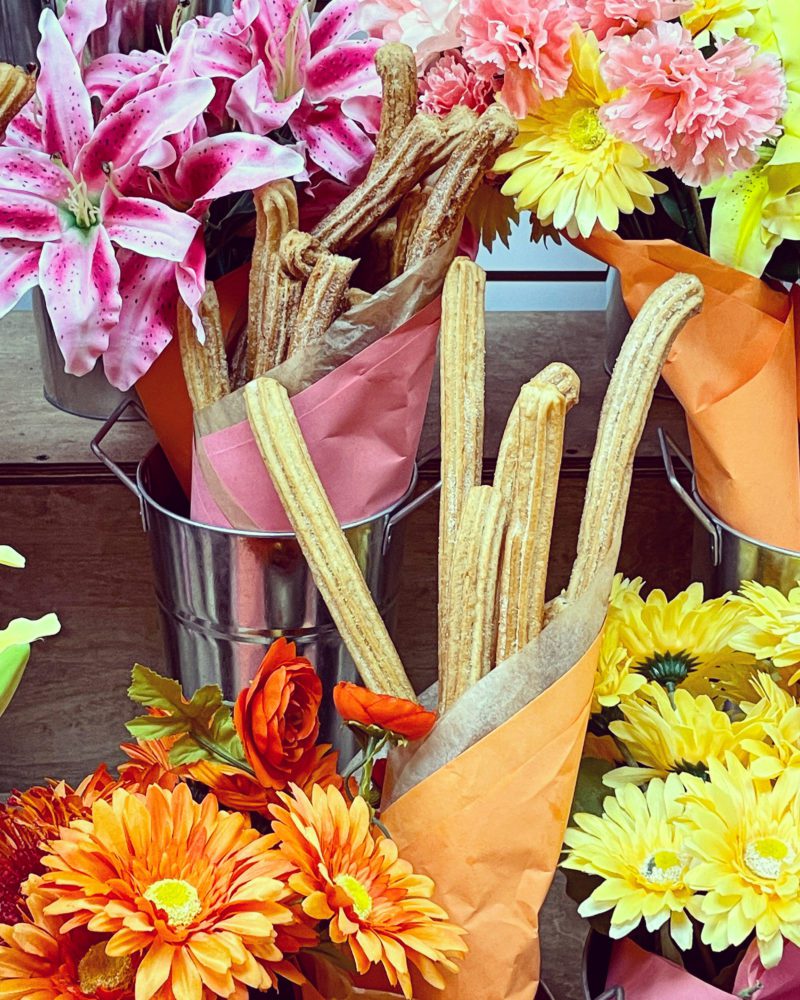 Along the labyrinth of aisles, the fly swatters and canned peas were gradually replaced by ice cream ingredients: a rack of black-and-white cookies, jars of dulce de leche. 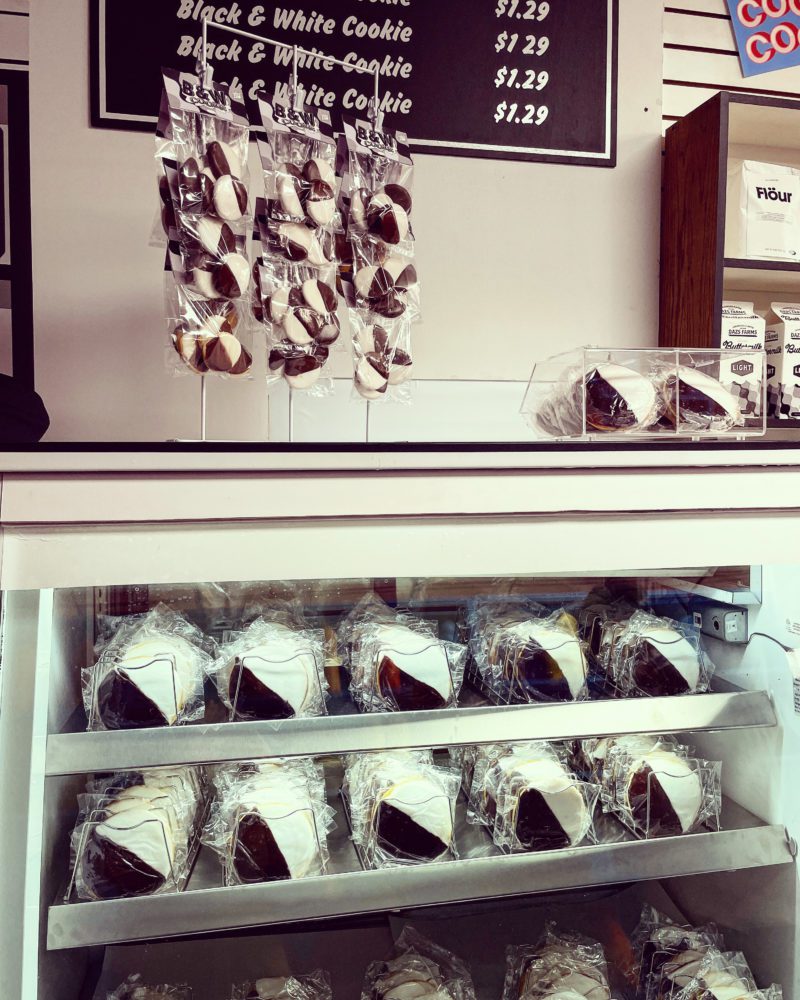 As I approached the back of the store, another bouncer gestured toward a fridge and encouraged me to take some some free samples. But I opened the door… 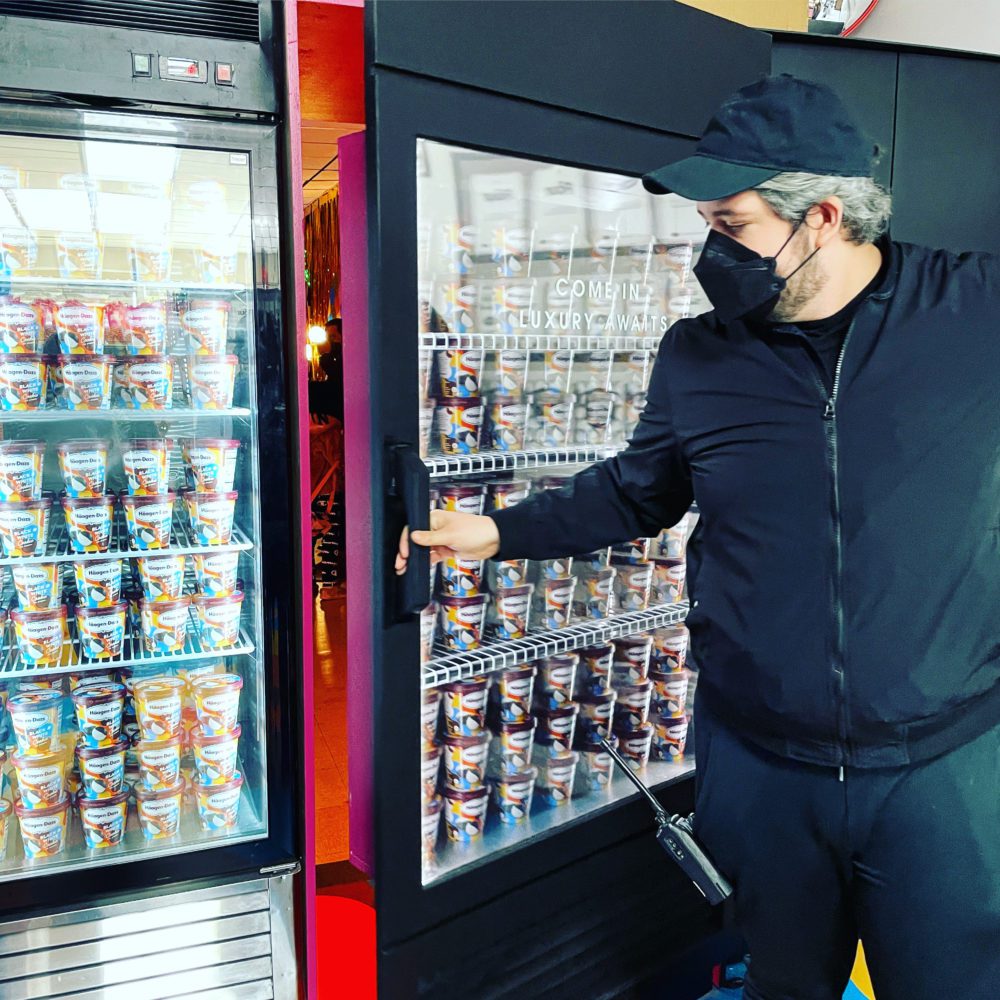 …to a speakeasy club, complete with a disco ball, a DJ, tinsel-covered walls, beat-up velour couches, and clutches of Instagramming millennials and parents with kids on spring break. Ice cream samples awaited. This was just the kind of “secret” locale that would be hidden behind a refrigerator of a Brooklyn bodega. 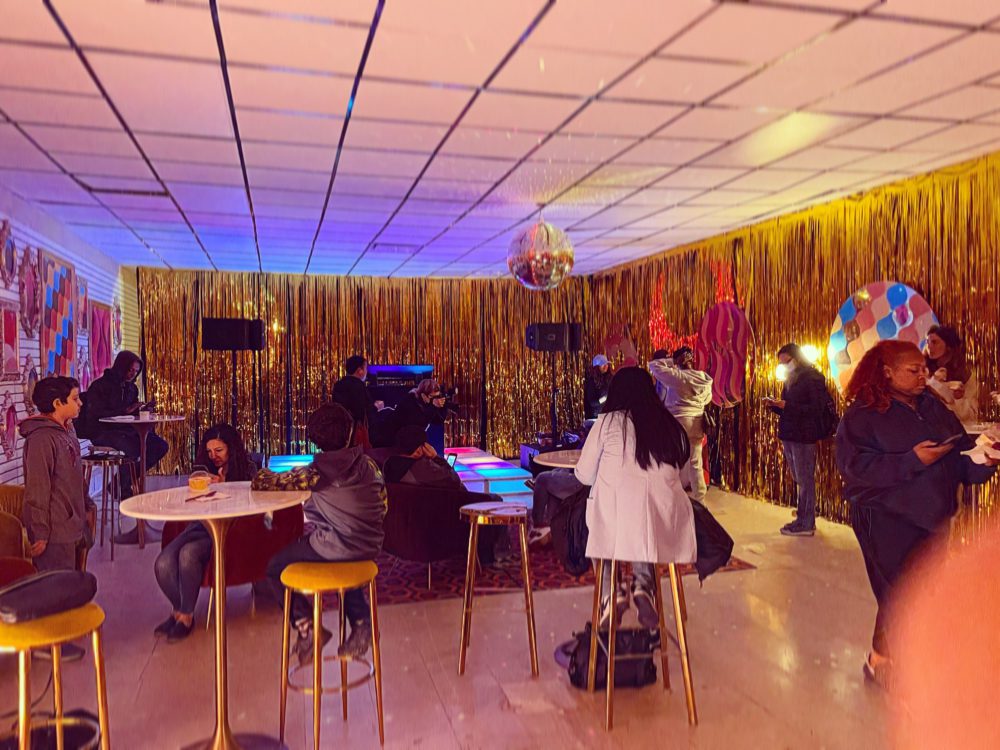 Finally, I dipped into free samples of the New York City flavors. (The other three “City Sweets” flavors are Chocolate Peanut Butter Pretzel, Coffee Chocolate Brownie, and Summer Berry Cake Pop. Though pretzels are admittedly a New York street food, I was discouraged by the addition of chocolate and peanut butter, which no self-respecting New Yorker would add to a sidewalk pretzel.) I noted that the ingredients in both flavors are all-natural, no high-fructose corn syrup in sight. 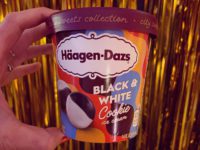 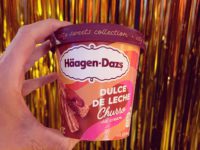 The Black and White Cookie managed to achieve the signature contrast of firm, chewy cake and melting icing, and even its appearance, with chunks of shortbread and ribbons of fudge in a vanilla base. 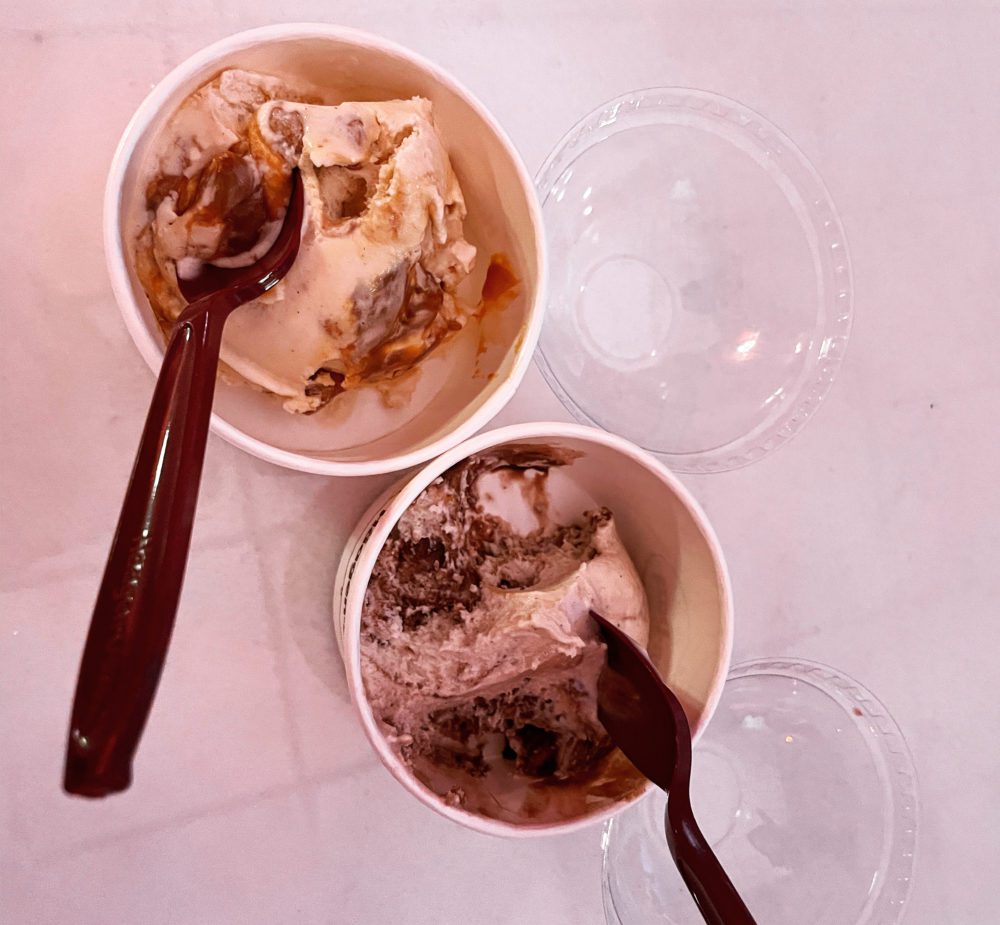 The Dulce de Leche Churro flavor was delicious in a cup but reached its apotheosis in bar form. I overheard one young visitor comment that it had a “New York kind of feel” in its combination of hard exterior and soft insides, like a subway churro, and was streaked with the spice of cinnamon and sweetness of caramel. 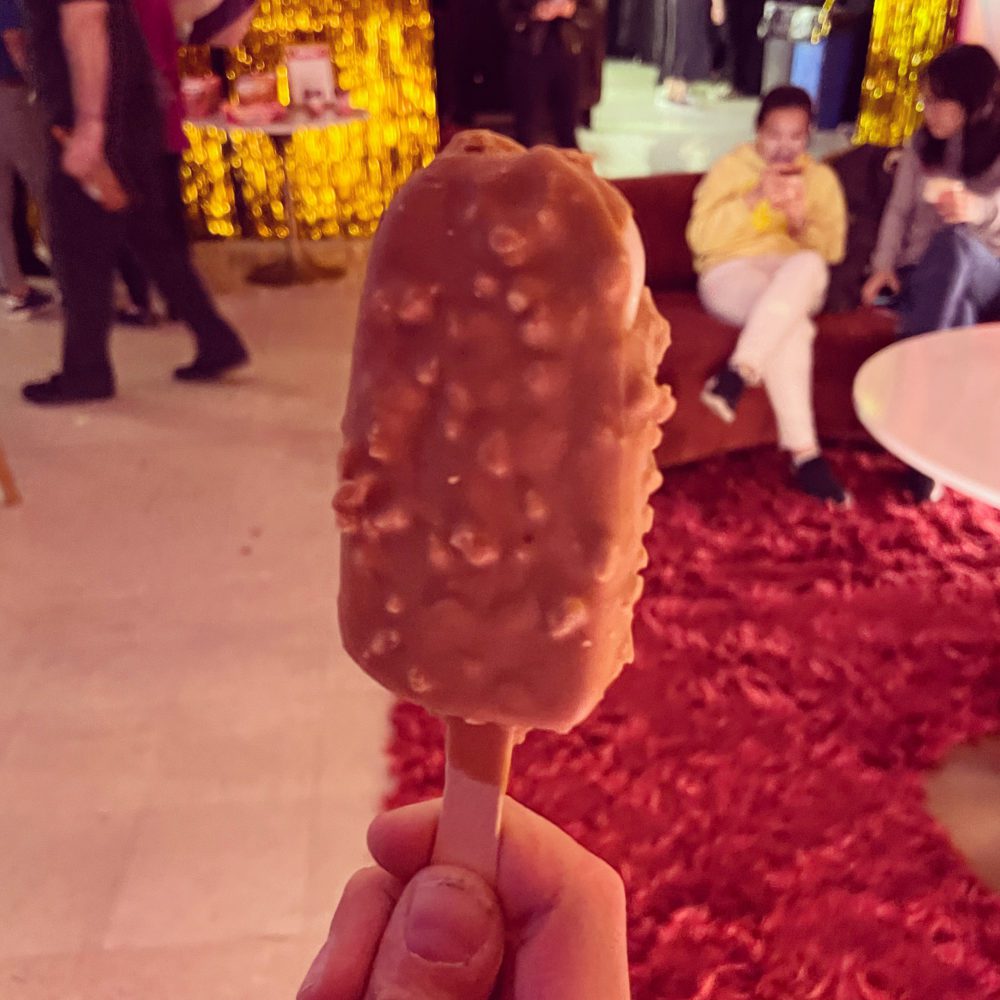 On my way out, a bouncer handed me a free pint and urged me with a nod to “stay safe out there.” On the sidewalk, a passerby, glancing at the spinning lights and racks of ice cream through the open door, muttered, “That’s some grand-opening shit!” Passing through Bed-Stuy on my way home, I passed a real brownstone bodega. Inside, I’m sure there was a fridge furry with frost and pints of rock-hard Hägen-Dazs, where they might even give you a plastic spoon if you give them a smile. 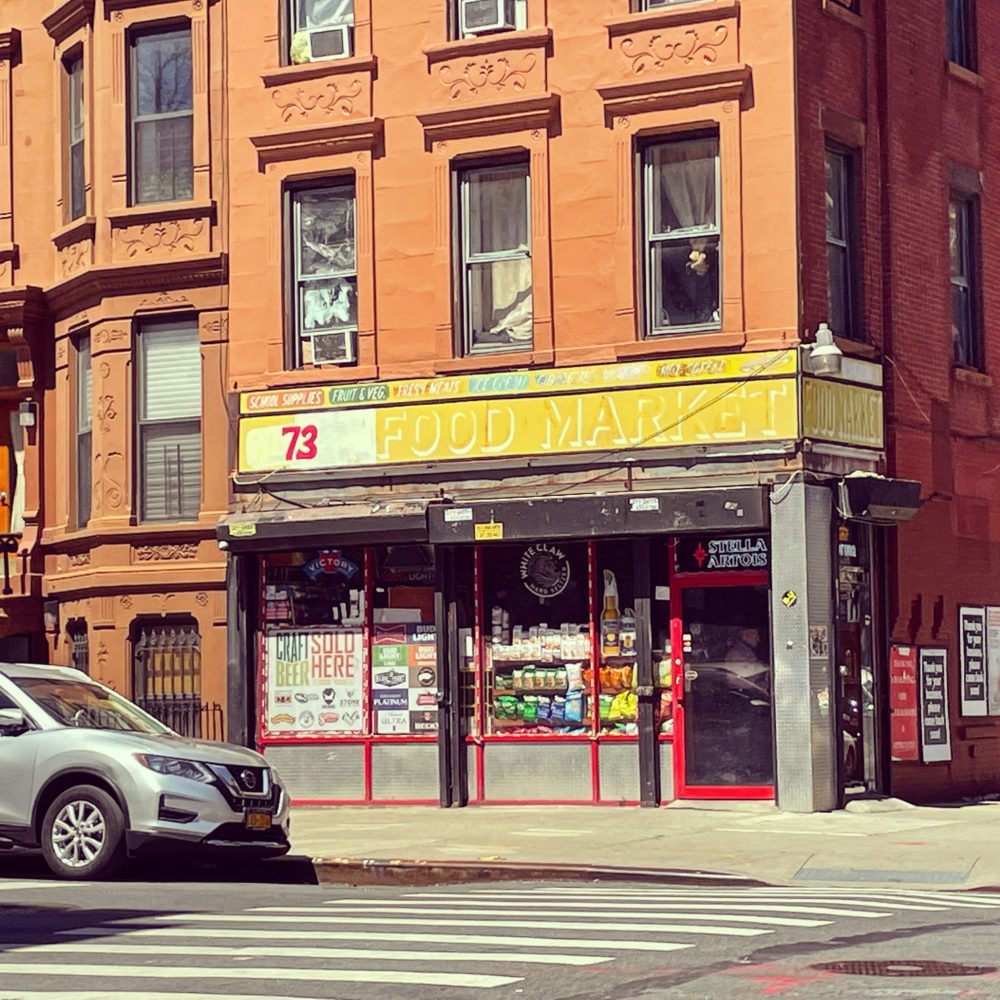