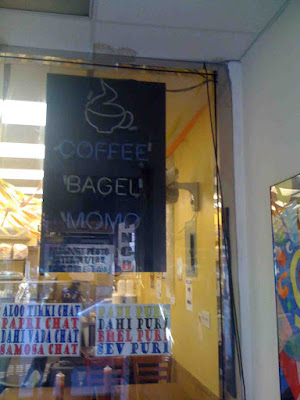 The neon sign says it all: COFFEE BAGEL MOMO. It’s the first thing that greets visitors entering Bombay Chat, a sort of Himalayan bodega/deli in Jackson Heights, Queens. The store’s name, like the sign, appears to be a wink at its role as a meeting ground for the Nepalese, Tibetan, Indian, and American communities it serves, with “chat” a play on chat, for phone and Internet services, and chaat, or Indian street food. A glassed-in booth at the front proffers phone cards, Neem toothpaste, lip balm, Motrin, batteries, and a bowl of betel leaves and brass urns of spices for paan, the breath-freshening chew. As at any other corner store, a sign taped to the window reads PLEASE PAY AT COUNTER FIRST, but here features a clip-art picture of hands pressed in the namaste blessing gesture. 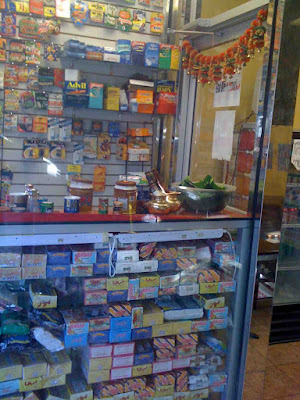 Inside, a flight of stairs leads downstairs to the Internet room. Upstairs, inside a small room festooned with streamers, one can snack on samosas and momos (Tibetan dumplings), as well as other Himalayan snacks from a steam table and small counter.

Though I saw no signs of either bagels or coffee, the American-Himalayan fusion was everywhere in evidence. A group of Tibetans in wool hats hunkered over tea in Styrofoam cups. A monk in red robes and sneakers rose from his table and bundled into a ski parka. A girl walked in, slipped a McDonald’s apple pie out of a paper bag, and munched on it while she waited for her plate of momos. 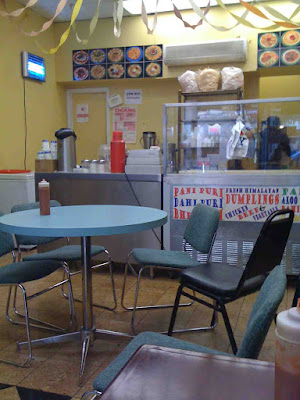 I ordered a samosa and vegetable momos, which were boiled to order and arrived fresh from the pot: warm, stretchy dough with poppingly crisp carrots, peas, and scallions bursting through the puckered skin, doused in a squirt of hot sauce. Though the samosa had been plucked from the steam table and microwaved, as it is in many of the Punjabi taxi stands I frequent, it tasted just the way I’ve come to like it: limp and saggy in the middle with large, crisp, flat edges, the inside a warm, soft mush of potato, cauliflower, and turmeric flecked with cumin seeds. A chai tea finished off the meal, tickling the tip of my tongue with a sweet ting of sugar and spices and a warm wash of milk. 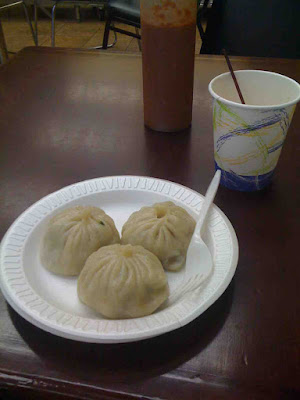 As I ate I looked up the portrait of the Dalai Lama hanging over the tables. He had his hands in prayer but was looking over one shoulder with a distracted and slightly bemused expression, as if he had been interrupted mid-prayer by a humorous comment. This seemed a fitting choice for Bombay Chat, which with its Duracell and its dumplings is a prototype of the cultural distraction that enriches and exemplifies our city.