I admit that I find it hard to resist any food served in a paper cup. Having tasted the Charlotte Russe, a cake-and-cream dessert that pops up from a polka-dotted paper sleeve, I thought I’d tried all the iconic New York City foods presented this way. I was delighted, therefore, to learn about the biscuit tortoni, a concoction of frozen almond-flavored custard mixed with crushed amaretti biscuits, topped with crumbled almonds and a frozen maraschino cherry, and served in a pleated wax paper soufflé cup. 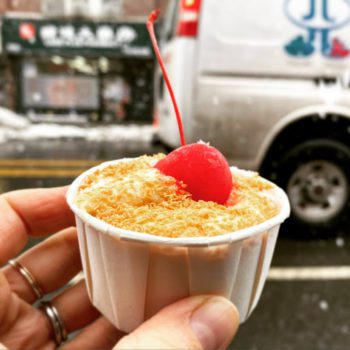 According to Arthur Schwartz’s book New York City Food: An Opinionated History and More Than 100 Recipes, the biscuit tortoni originated in eighteenth-century Paris, where a certain Neapolitan named Signor Tortoni opened an ice cream café where the dessert was first served. From Café Tortoni it made its way a century later to New York City; no one quite knows how. Schwartz claims that biscuit tortoni is unheard-of in Naples today. In New York, as Amanda Hesser mentions in a New York Times tribute to the confection, it became a staple in Italian American restaurants, from the Waldorf-Astoria to casual red-sauce joints and to street carts. Édouard Manet memorialized Café Tortoni in a painting, though the dour subject seems to be fueling his writing with a beer rather than a tortoni. 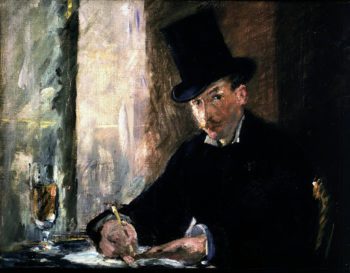 These days, there are few places this classic New York City dessert can be found. One is restaurant in the West Village, Villa Mosconi, which has an entire webpage devoted to the dessert but is, unfortunately, closed at the moment. Plus, I decided I wanted to eat my tortoni like a nineteenth-century child might have: on the street, with traffic rushing by. So on a recent snowy day I headed to Villabate Alba, a Sicilian bakery on Eighteenth Avenue in Bensonhurst, Brooklyn, which beckons visitors with a human-size cone of gelato. 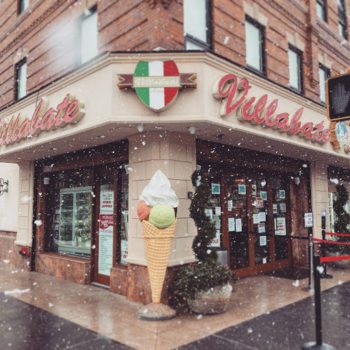 Stepping inside Villabate Alba is like stepping into a wedding cake. The ceiling features a fresco of clouds and angels, statuary of the Holy Family and Rangers memorabilia decorate the tops of the displays, and marzipan fruit, rainbow cookies, and cakes dripping with decorations gleam beneath the glass. 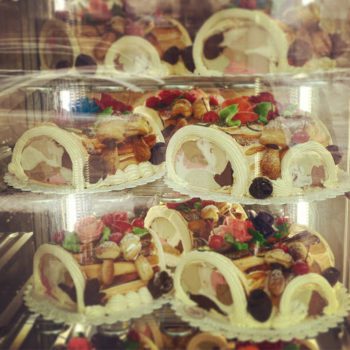 A mute maître d’ wearing a baseball cap labeled “Pristine” directs visitors with glares and hand gestures and straightens the carpets and retractable stanchions. An Italian radio station plinks from the speakers, and everyone orders in Italian. This place is the real deal. 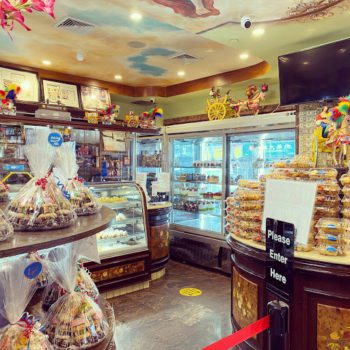 I pinch the paper cup—known in Italian as a coviglie—between my fingers and carve my spoon through the topping of crumbled amaretti cookies into the frozen custard. It’s slightly gummy and chewy and not too sweet. The cream has a foamy quality despite its thickness: it tastses more like a frozen whipped mousse than ice cream. The almond flavor and crunch of the topping add bite to the creaminess. One of my favorite features of frozen desserts served in paper cups is that they melt from the outside in, responding to the heat of your fingers, and the cup softens and squishes and almost becomes part of your hand. 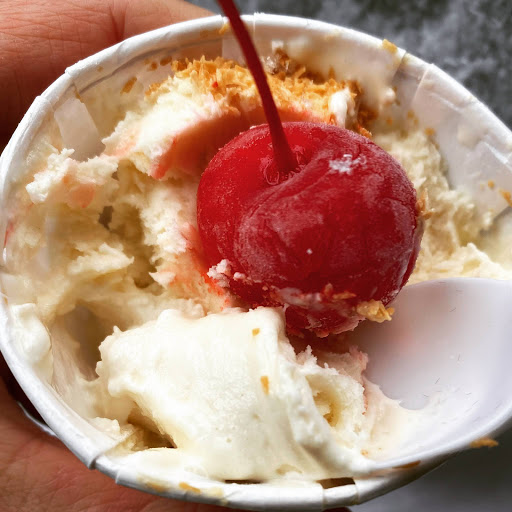 The frozen maraschino cherry provided a burst of crystallized saccharine delight, the flesh of the fruit glimmering in crystals against the teeth, its artificial sweetness a nice counterpart to the mellow custard. Alternating bites of icy sweet cherry and soft, almond-scented, biscuit-studded cream proved the best way of enjoying this dessert. 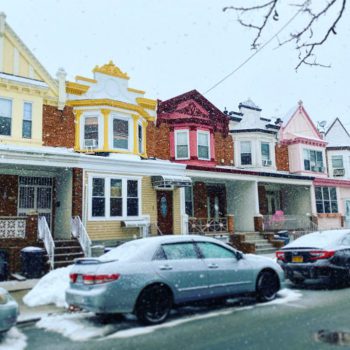 As I drove home through the Brooklyn streetscape of gray buildings and grayer snow, I happened upon this block of West Ninth Street, where a stretch of tidy houses offered a burst of color and fanciful decorations—stripes, rooftop spires and filigree, pink and yellow and golden paint. It was not unlike Villabate Alba and its biscuit tortoni, whose cold, bright flavor lingered on my tongue through the rest of the dreary day.