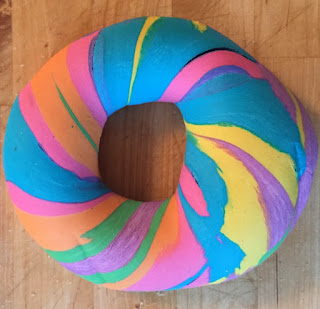 “This place used to be so peaceful before the Rainbow Bagels came,” says the guy beside me at the Bagel Store. “I’ve lived in the neighborhood for ten years, never seen anything like this.” The South Williamsburg shop’s generic name belies the line that reliably snakes around the corner, tourists and locals alike queuing up their Instagrams for a #nofilter shot of the store’s signature creation, which is experiencing a recent and somewhat inexplicable craze. 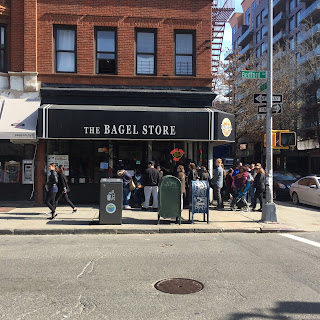 In fact, owner Scot [sic] Rosillo was making the psychedelic bagels for about twenty years before they became a trademark, and he has another outpost on Metropolitan Avenue, where the line is reliably shorter. “I don’t normally get hyped about stuff like this, but they look awful purty,” purrs one woman, craning her neck to peer into the shopwindow, her toddler dozing in a stroller. The line inches forward under the spring sun. “They should have, like, a stand and a little credit-card swipey thing,” another customer suggests. The crowd’s mood is bewilderingly cheerful and patient for New York City. The Rainbow Bagel’s swirl pattern varies: as an object it is undeniably beautiful. A fascinating video of the baking process reveals a child’s Play-Doh fantasy: great slabs of colored dough layered atop each other into a great jiggling brick, sliced, rolled out, and twisted with a snap of the wrist into rings. The dough is made in vanilla and various fruit flavors, and there are unconventional cream cheeses to accompany them. The go-to combination—and the most photogenic—is a Rainbow Bagel with Funfetti cream cheese, made with rainbow-sprinkle cake batter. 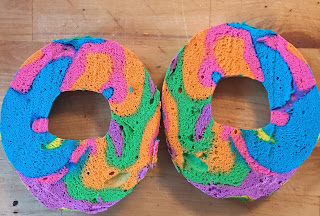 Of course, the classic New York bagel taste, the taste that is impossible to replicate anywhere else, is the crunch and pop of sesame seeds and poppy seeds and crust, yielding to warm, yeasty dough, then the tang of cream cheese punctuated by the briney slash of a piece of lox, and then the same thing in the reverse order on the other side, the whole thing sour and salty and creamy and sweet and peppery in each bite, squishing together and oozing out the sides in a finger-licking mess. 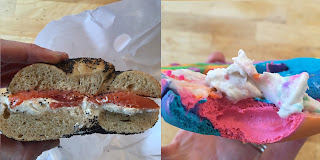 The Rainbow Bagel taste, on the other hand, is to some (myself included) a form of blasphemy: lurid cake-flavored bread slathered with cloying icing. The bagels themselves are eerily lightweight, rubbery, stretchy; the dough in cross section is shiny, not unlike plastic. The vanilla bagel is more tolerable than the fruit flavors, which taste like Froot Loops or Starburst candy and have a lingering artificial aftertaste. 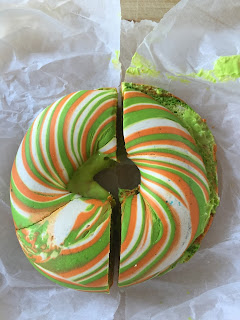 For Saint Patrick’s Day this year, the shop reimagined the standard-issue New York City deli’s annual green bagel special as a green, orange, and white bagel, symbolizing “the luck of the Irish.” I decided I would give the Bagel Store another shot. The dough was supposedly spiked with Irish whiskey and the recommended accompaniment was a Baileys Irish Cream–inflected cream cheese. 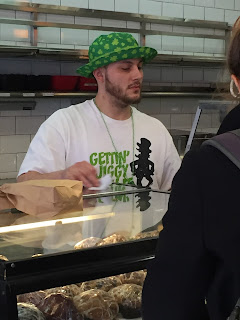 The counter guy wore a shamrock hat, a shot glass on a string around his neck, and a T-shirt depicting a dancing leprechaun and the words Get Jiggy With It. My skepticism soared. “I’m actually having the worst day of my life today,” he confessed as he popped open a paper bag. “But you wouldn’t know it, would you?” He sidled over to the counter and hurled a bagel onto a cutting board, and was I imagining it or did he do a little jig as he slapped on the cream cheese?

To my surprise, the concoction was delightful: the dough retained both the spike and the smoothness of the whiskey and was not too sweet, and the gaudiness of the liqueur was mitigated by the tartness of the cream cheese. Perhaps this was such a far cry from the classic version it deserved a judgment of its own.

Maybe it was the dancing leprechaun, the previous contents of his necklace, or “the luck of the Irish,” but some kind of magic was clearly at work in Brooklyn.