The windchill was below zero and the sun piercing on the morning I visited Atlantic Salt Company, located off Richmond Terrace, Staten Island, on the shores of the Kill Van Kull. The day before, the Key Frontier, a freighter based in Panama, had just arrived with about sixty thousand metric tons of road salt from the salt flats of Chile. 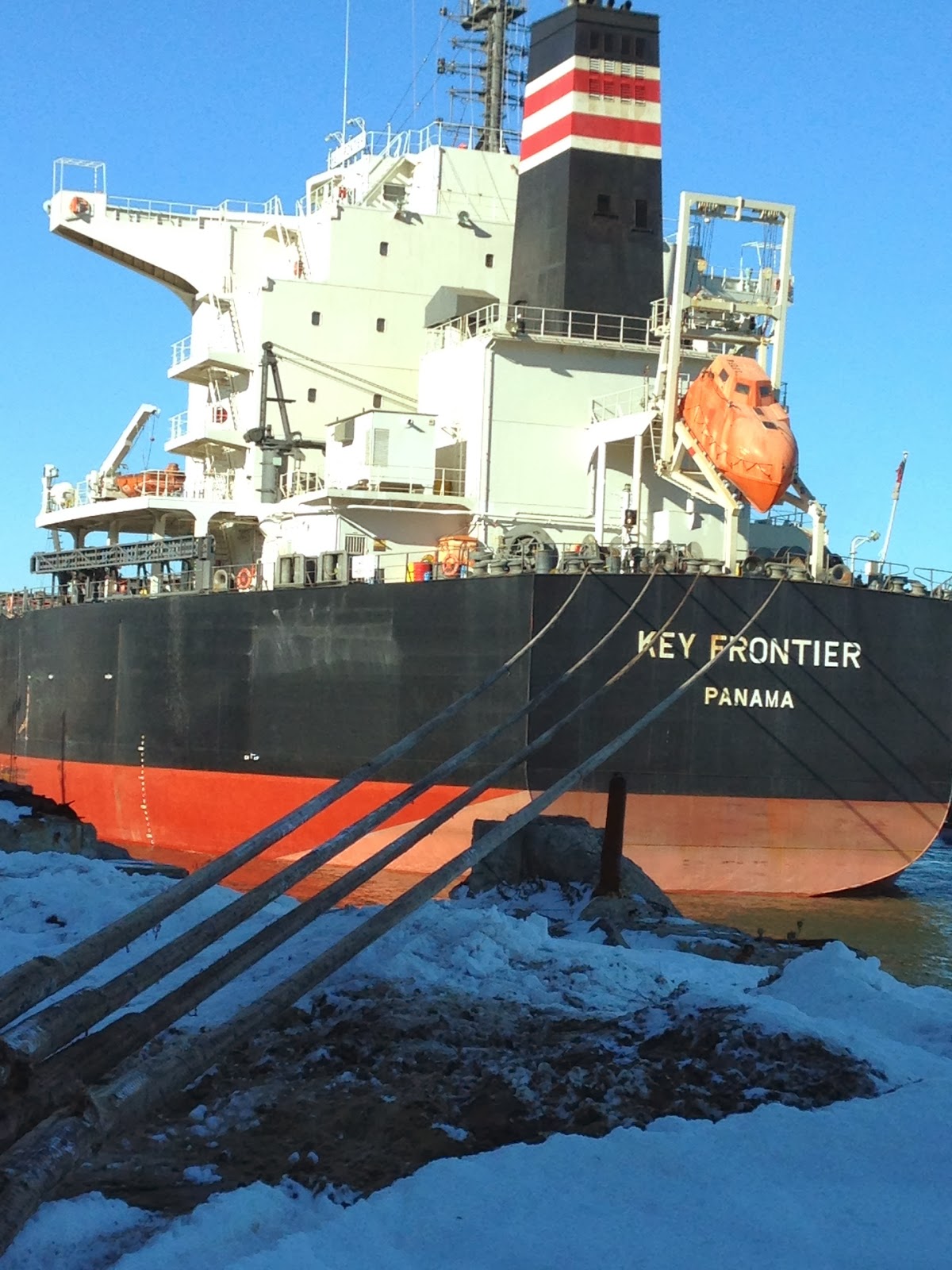 Atlantic Salt also receives regular shipments of salt from Mexico, Ireland, and Egypt, from flats and from mines and distilled from the sea. Depending on the country of origin, the salt’s color might be brown, yellow, white, or even green. Brian DeForest, the terminal manager, says that his clients get attached to a certain road salt and complain of adulteration if a different color arrives. Winter is the time for road salt, and the more it snows the higher the demand. This year’s supply—bound for the greater New York City area—sits right here in several white mountains. 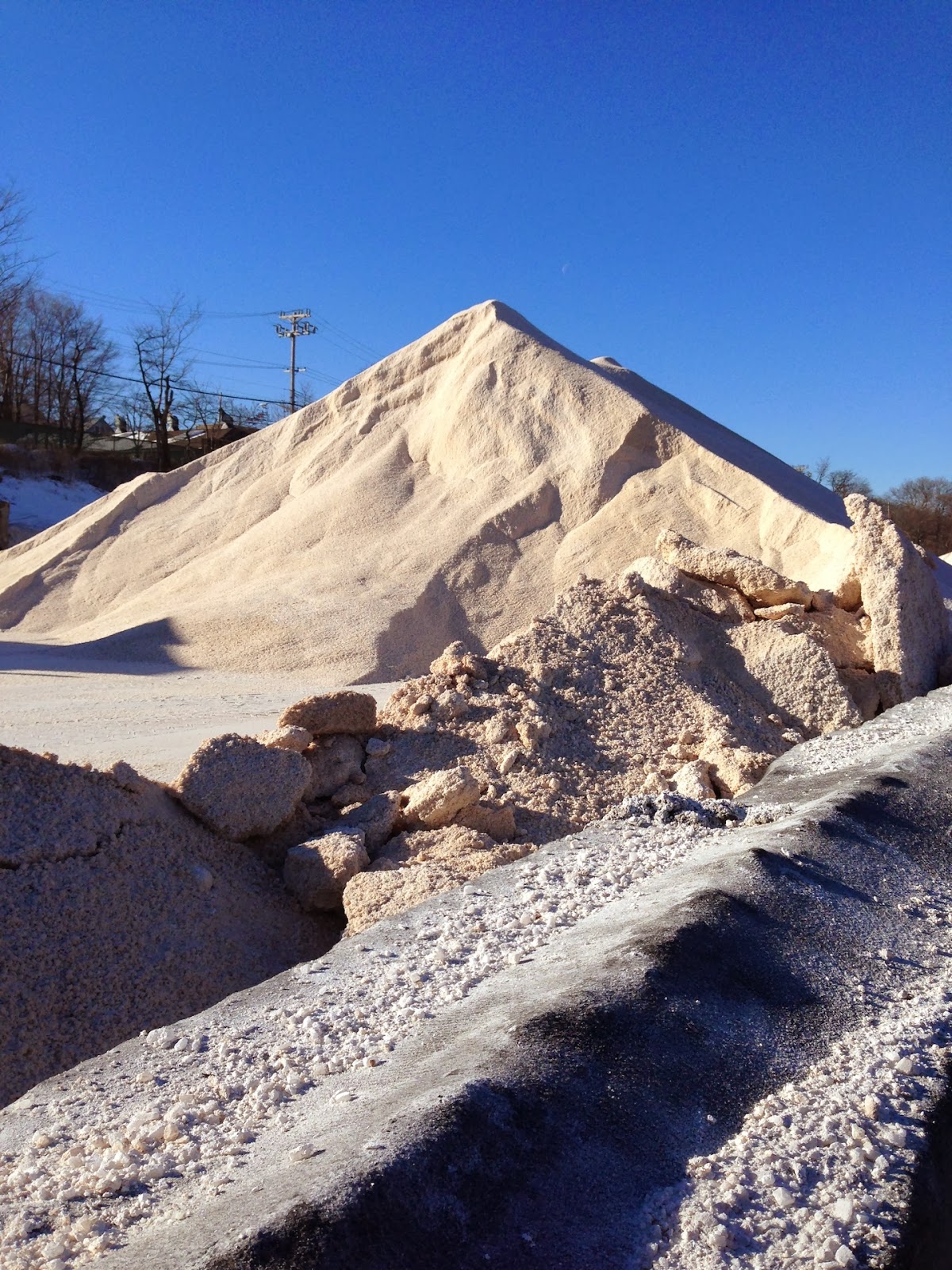 Atlantic Salt serves the five boroughs as well as Westchester, Rockland, and Long Island; the company has another station in the Port of Newark. It will take about six days to unload the Key Frontier. After departing New York, the hold will be washed out and the ship will pick up a load of coal in Colombia, returning to Chile to drop off the coal and pick up more salt, then return to Staten Island. Travel time from Chile to New York is three weeks. For the six days a freighter is moored in New York, forty-ton trailer trucks as well as smaller pickups rumble in and out of Atlantic Salt, from dawn till dusk; those from towns close by may make several trips a day to refill their town’s salt sheds. 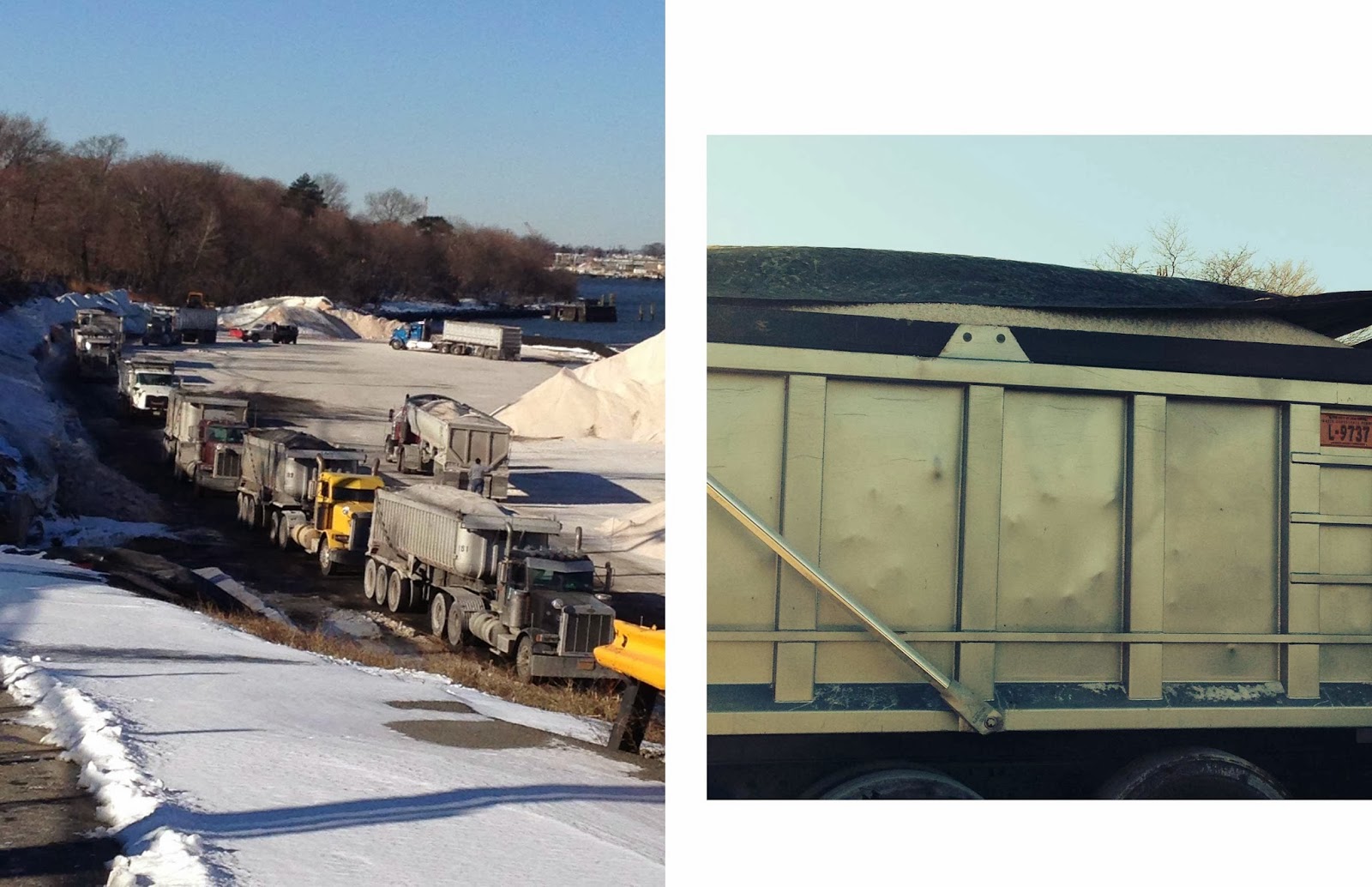 The company offices are housed in a construction trailer with a sliding window next to one of the desks. It smells of air freshener and the mood is one of disgruntled camaraderie. As trucks depart with full loads, they are weighed on scales just outside this window. They receive a ticket confirming their weight from an acerbic woman with a Post-it affixed to the back of her chair reading “Out to Lunch.”

As I walk along the waterfront, stepping over the frostbitten lines securing the Key Frontier to the pier, the wind blows the salt in great wispy drifts across the lot, and I can actually taste it on my lips. Pretty much any object in the yard is limned with salt, though Brian mentions that the salt is misted with water to prevent blowing. The salt hangs in a haze in the air; if you stick out your tongue you can almost catch it like snowflakes. 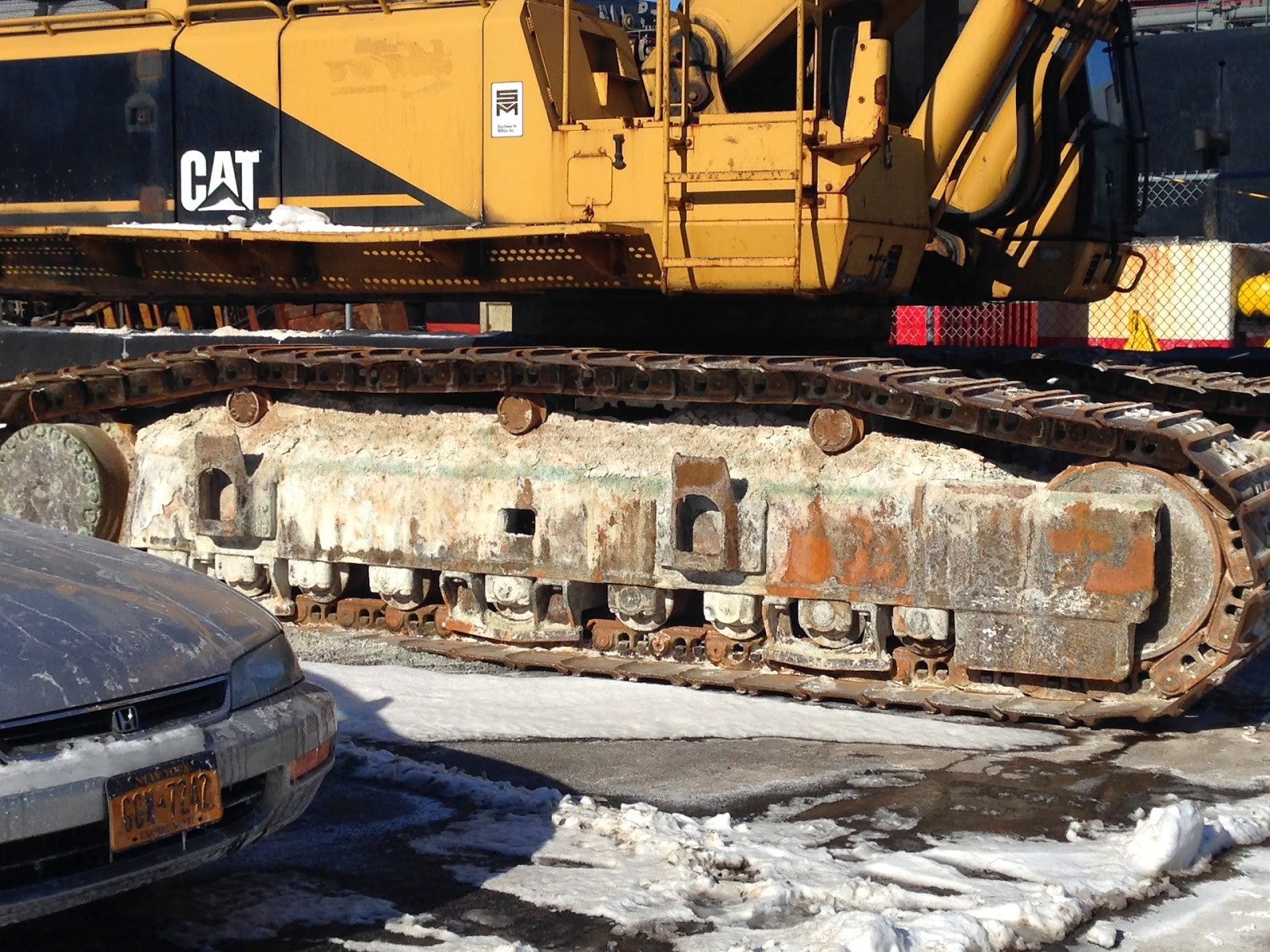 The choreography here is straight out of a child’s sandbox. Up above, a huge crane drops a thirty-ton bucket—a scoop with jaws—into one of the ship’s seven holds. The iron lines quiver, the diesel-powered crane engine emits a belch of dark smoke, and the bucket emerges, full of salt. The crane swivels and its maw opens, releasing a cascade of salt onto the top of the pile. 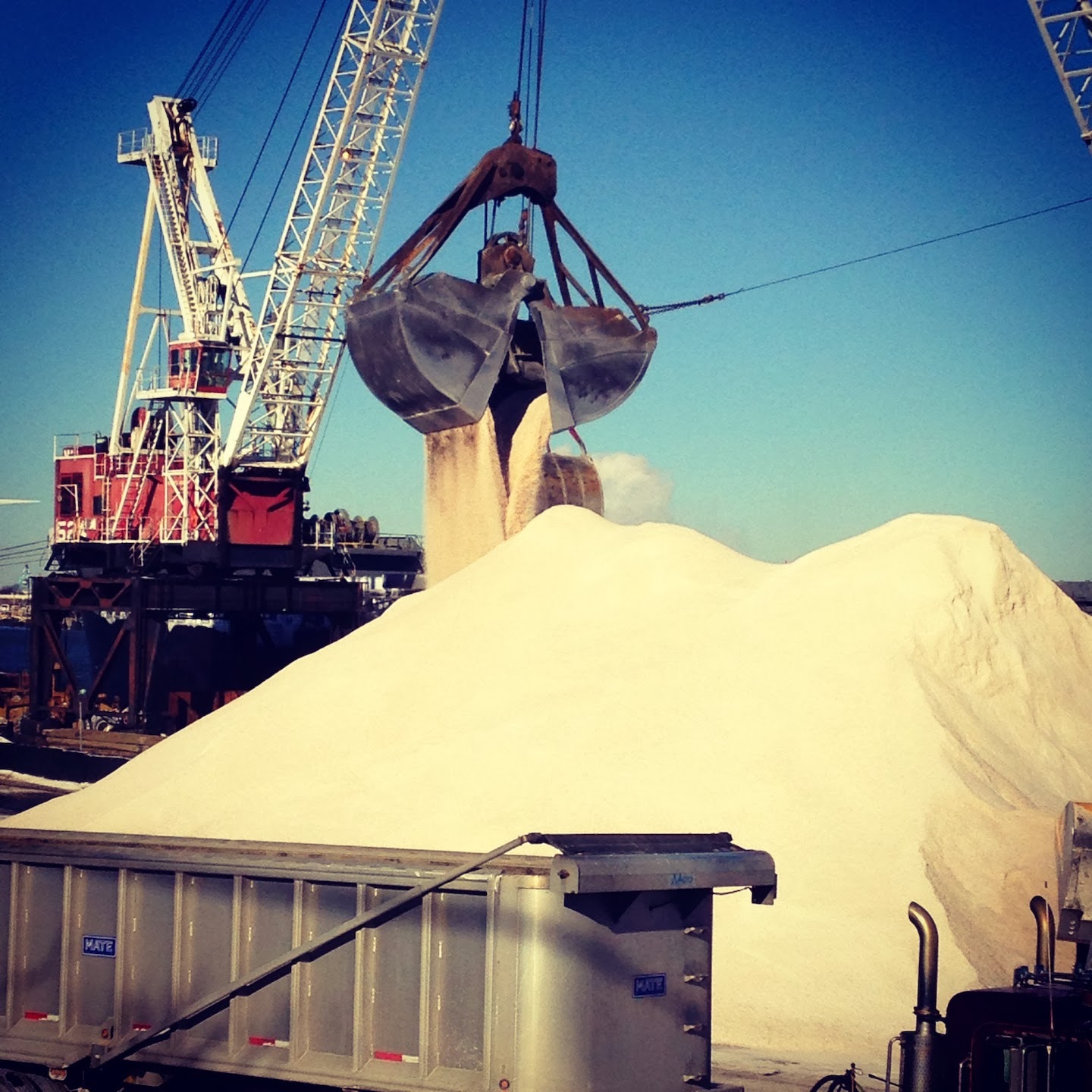 As it moves away for the next load, a front-end loader rams into the pile and lifts up a load, its tires buckling under the weight. Then—in a sequence of moves performed thousands of times each day—the loader reverses, turns, and drives it to the side of a waiting truck, it dumps the salt into the truck’s container. The whole process—from ship’s hold to truck—takes only a minute or so; the operation is so smooth that about sixty trucks be handled each hour. 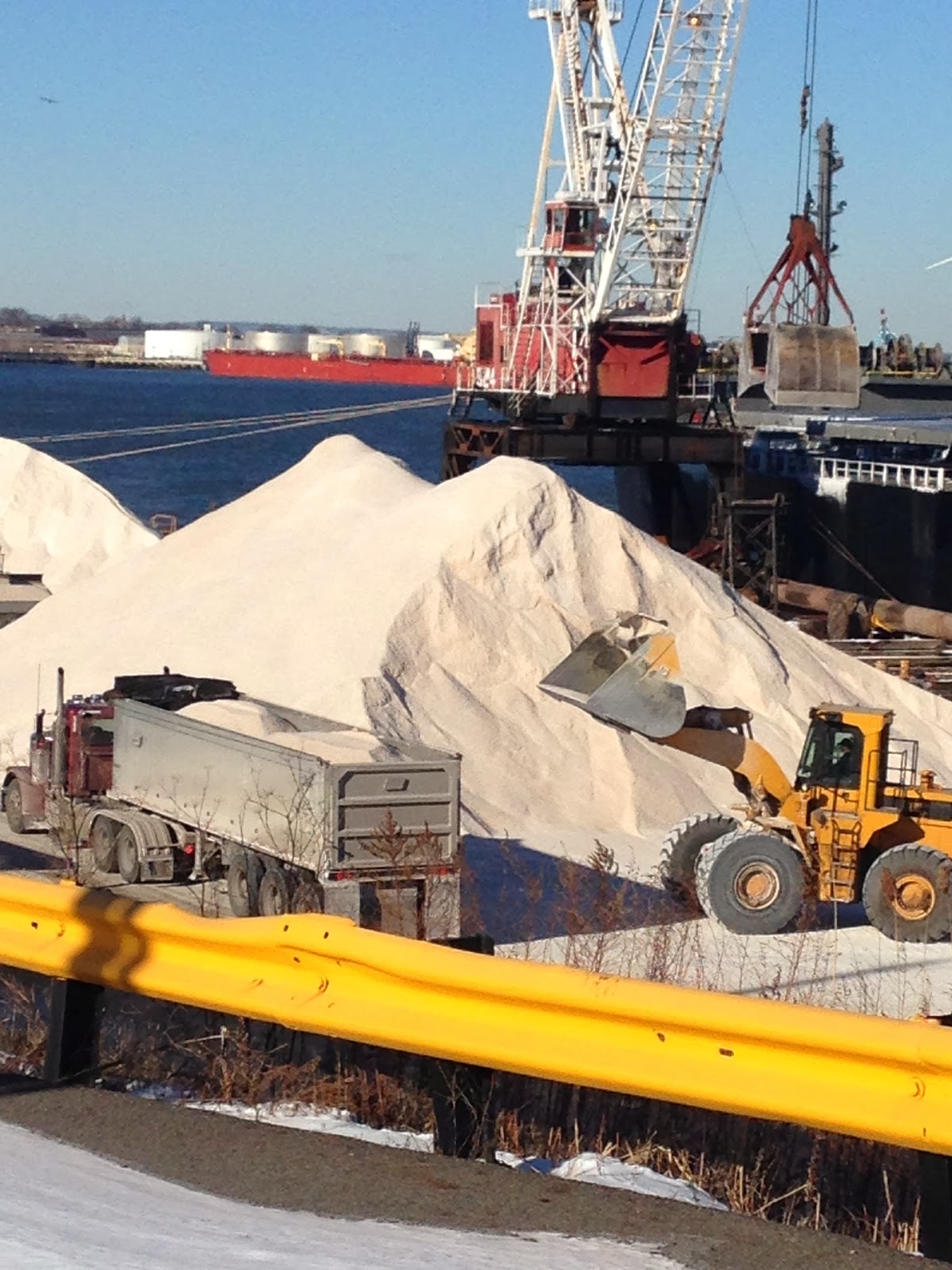 After a few loads, the truck is brimming with white salt and ready to deliver the salt to a Department of Sanitation salt shed, where it will be loaded into an orange salt-spreader and, ultimately, onto to city streets. City sanitation companies pay seventy-four dollars a ton for this salt. It’s never mixed with sand, as the sand doesn’t dissolve in water and clogs city sewer pipes. 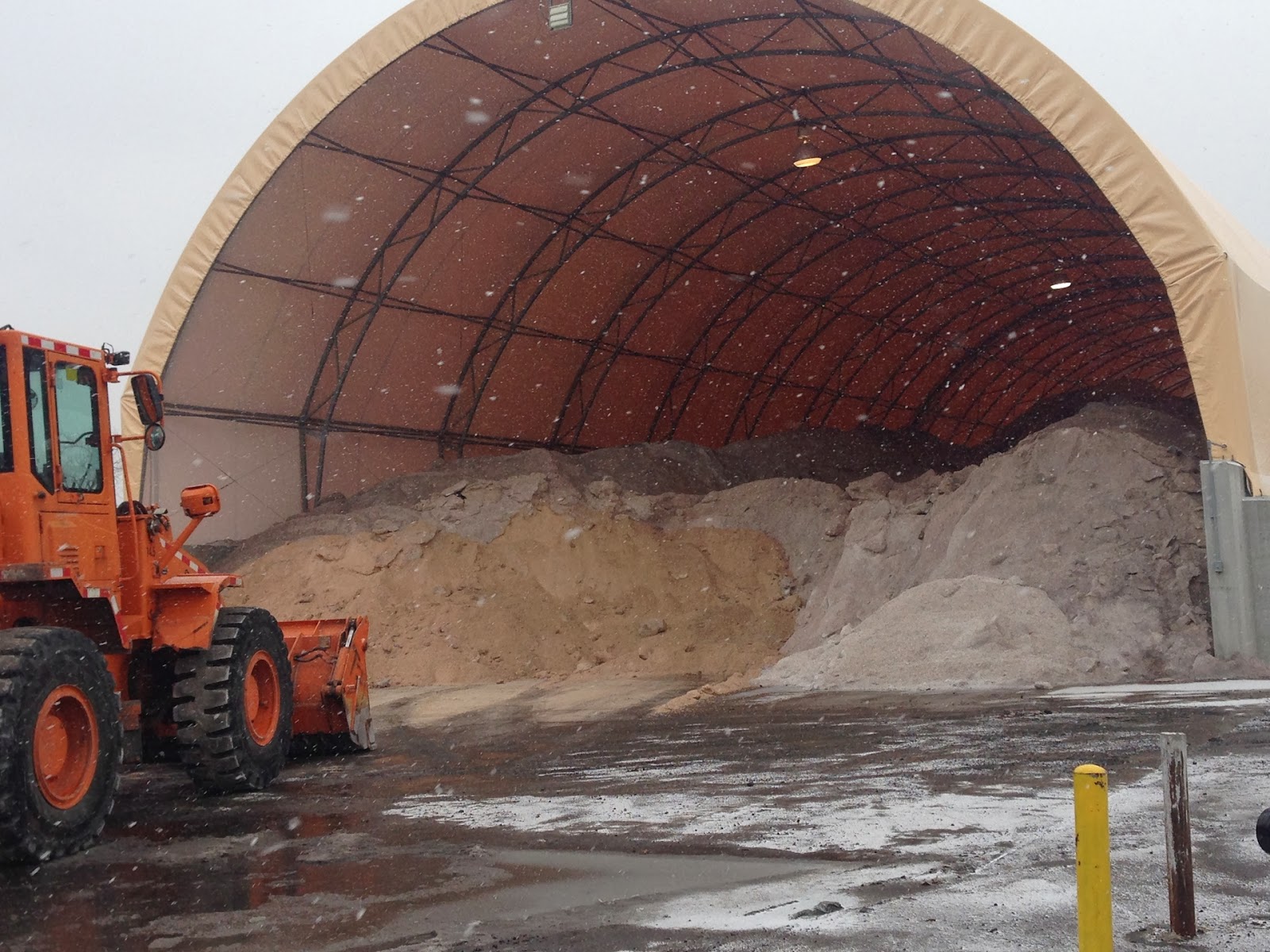 A few weeks later, in the middle of a snowstorm, I am waiting to cross a street when a sanitation truck galumphs past, spraying salt. The granules pelt my legs, and the woman next to me leaps back and yelps, “Ouch! That stuff hurts!” I lick my lips. I can almost taste it. 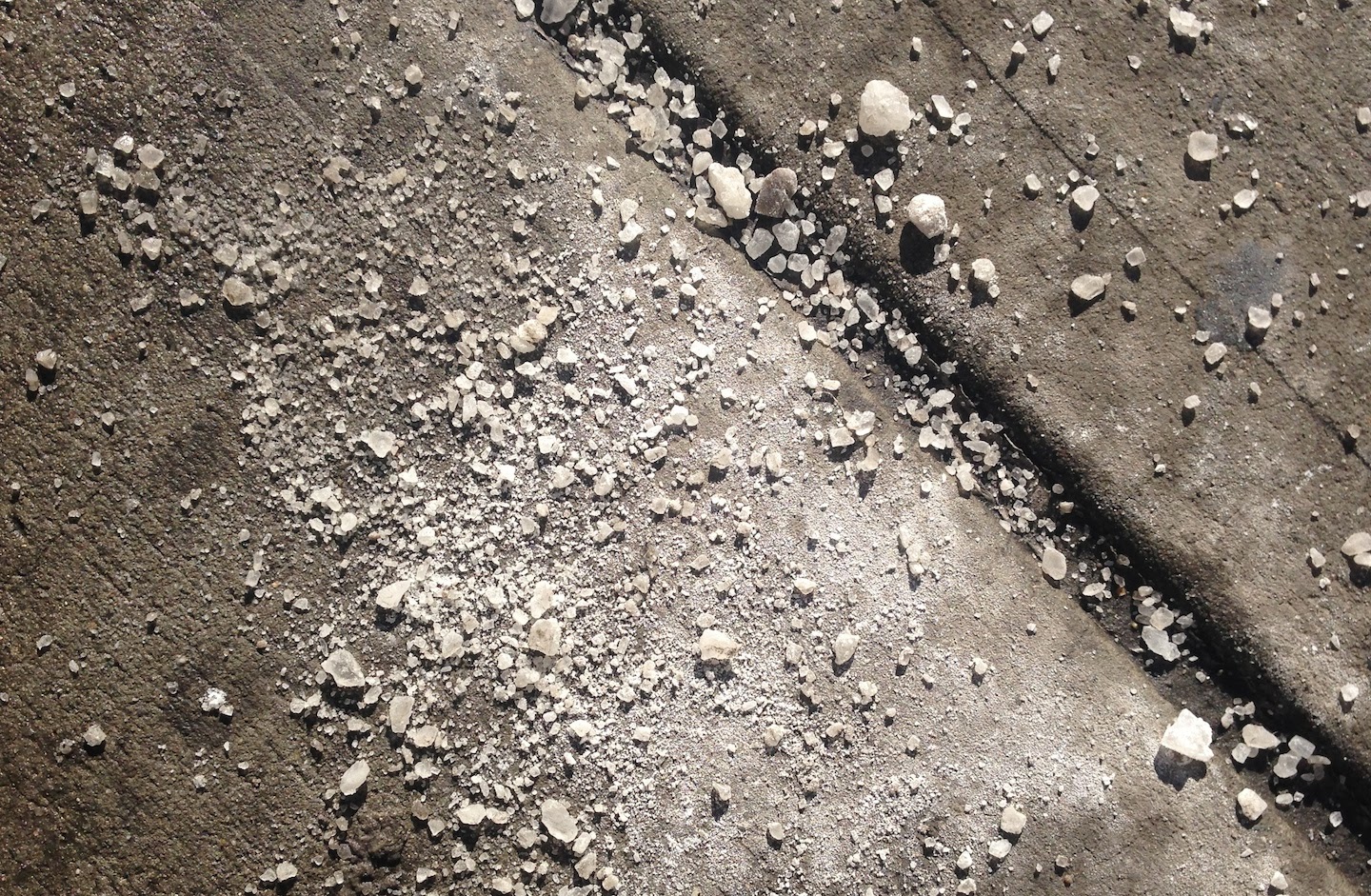 With thanks to Brian Deforest of Atlantic Salt, Will Van Dorp (http://tugster.wordpress.com/), and Ray Habib of the Brooklyn Navy Yard.

2 thoughts on “TASTE: Atlantic Salt Company on a winter day”