The most important rule of eating pizza in New York City is not to plan to do it. You’re feeling a little peckish, so you pop into the nearest pizza shop, grab a slice and maybe a soda, and about eight minutes later you continue on with your day. A slice of pizza in New York is not an event. 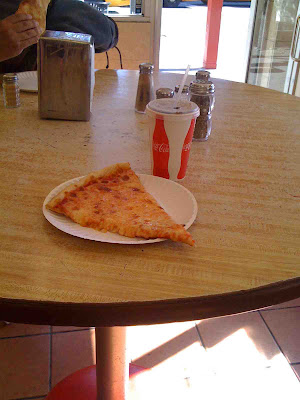 My real pizza-eating story takes place on a recent chilly evening, around 9 pm. I was on my way to a cocktail party in Manhattan. I’d eaten dinner hours before but felt I needed some sustenance for a night on the town. So I ducked into Not Ray’s Pizza in Fort Greene (the parodic name is purely coincidental). Fluorescent lights. An intimidating, high counter of thick plastic sheltering stagnant pizzas on beat-up tin trays, and calzones and a bowl of garlic knots as afterthoughts. Glass shakers of faded red-pepper flakes, oregano, and Parmesan. Tippy stools, Formica-topped tables. I approach the counter and say, “Just a slice” (not “Can I please have one slice of plain pizza to go? Thanks!”). The counter guy jabs the pizza wheel across the pie, flips the cutter onto its side, and uses the blade to heft my slice onto a crenellated paper plate with a wax-paper sheet, then into the oven–all in a single fluid motion. Four minutes later he flops the plate onto the countertop. I pay, wordlessly, and sit by the window. The crust is so hot I can’t touch it, so I use the plate to fold the slice in half, taco-style. (N.b.: Another common New York pizza-eating style is to take the slice outside at this point, the plate protecting your hands from the heat, and nudge the slice forward, tip first, eating it one-handed as you walk.) 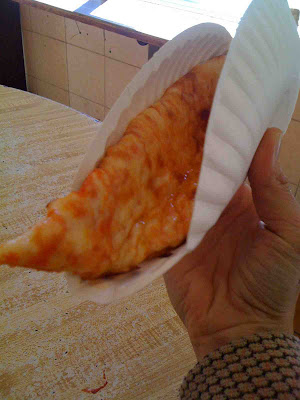 The spine cracks, and lurid orange grease oozes into the crease. I shake on cheese and flakes. I dab at the grease with a wad of napkins. I tip the slice into my mouth and the cheese slides toward me, leaving a naked, damp, bumpy crust in its wake. The taste: a crisp crack of folded crust, an easing of salty, stretchy cheese into the mouth mingling with the bland crunch of the crust, followed by a swig of effervescent, tangy Diet Coke, swallowed in one searing hot, icy cold gulp. I leave with a scalded tongue: the true aftertaste of a slice of New York City pizza.

Side note: A few weeks later, for thoroughness, I made a planned trip to “the One and Only Famous Ray’s of Greenwich Village,” purported to be the definitive New York City Ray’s. (The business pages list at least fifty-four Ray’s Pizzas in the city.) It was authentic to the core, and improved on Not Ray’s only by having fountain sodas, high, round tables at the front with no chairs (there was a seating area in the back that seemed only for tourists), and local customers who didn’t speak their orders but held up one or two fingers to indicate the number of slices. 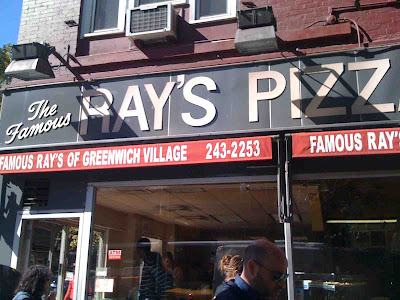