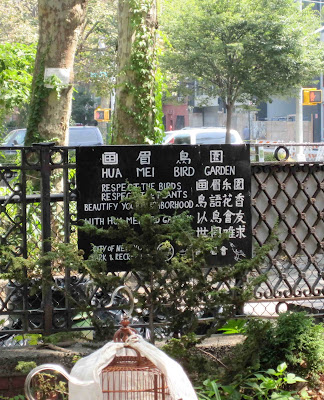 Every morning, rain or shine, and before the alternate-side parking regulations kick in, the Hua Mei birds and their owners converge in a pine grove just south of Delancey Street. The Hua Mei Bird Garden is at the northern tip of one of the segments of Sara Delano Roosevelt Park, between Forsythe and Chrystie streets, and surrounded by a chain-link fence and marked with a sign in Chinese and English: “Respect the Birds. Respect the Plants.” Approaching from the north, it’s easy to miss the garden: the blaring truck horns, idling buses, and lurching taxis all but drown out the trilling of these exotic, diminutive birds. But if you step off the sidewalk into the cobblestone shadows, you’ll see ornate bamboo cages swinging from poles and tree branches and strung along a nylon clothesline. Behind the bars, bright-eyed birds chirp and preen and fly about, their wings fluttering against the spindly bars of their cages. Each has a unique song. Their owners—almost exclusively Chinese men—perch on nearby benches, cradling paper coffee cups and comparing notes on their birds. Every so often, a few men enter the garden to turn back the cotton cover on a cage, or chuckle at their birds the way one might at a baby. 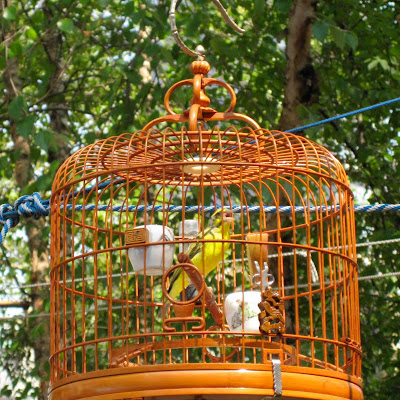 On a recent Sunday morning, a yellow bird with an orange head and three porcelain water bowls let out a rich warble. A gray bird with a pink beak nibbled on a piece of bok choy and offered a tentative tweet in return. A bird with ringed eyes flitted around its cage. A yellow bird with gray wings called out, “Cheer, twittle tweet!” And a gray and brown bird with a russet head and tangerine breast murmured, “Chick a chick chick chick.” A man in a green Izod shirt wiggled his finger between the bars of its cage. The nearby birds erupted into song, and he moved the cage deeper into the trees. A Hua Mei with gray feathers as fluffy as a newborn chick’s tucked its head beneath its wings. A regal beige bird in an enormous cage with a cover held aside with binder clips uttered a shrill, full-throated call and did a series of back-flips, landing each time on an infinitesimal bamboo swing. The yellow bird whistled in response, its chest rippling, its beak fluttering and quivering “Putta pee, putta pee!” Then it dipped toward its water dish. Up above, huge, silent pigeons soared. 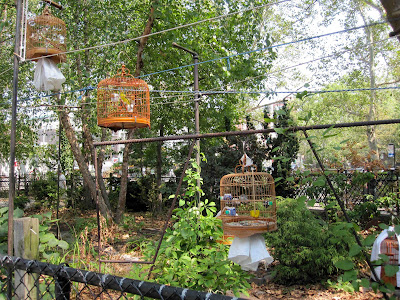 A community group was erecting tents and a plywood stage for a street fair in the adjacent square. A man climbed onto the stage and barked into the microphone, “Testing! Testing!” The microphone squawked. A father passing by with a toddler in a stroller pointed up. “See the birdies?” And a teenage kid crossing the park stopped at the sight of the birdcages, and, without removing his headphones, sat on a bench to listen.