SOUND: The anechoic chamber at the Cooper Union

Have you ever wondered if there’s anywhere in New York City where you can experience total silence? No sirens, no subways, no cell phones or children or street buskers or jackhammers?

As it turns out, there is, and it’s one of the quietest places not only in the city but on the planet. It’s called an anechoic chamber, and it’s tucked away in the Vibration and Acoustics Laboratory at the Cooper Union for the Advancement of Science and Art, in the East Village. One recent weekday afternoon, I set out to experience it.

Inside 41 Cooper Square (a building remarkable in its own right), in a windowless lab room filled with blinking monitors and snaking wires, a set of stairs leads to a small, insulated metal door with a large handle. It looks like the entrance to a bank vault, or perhaps a solitary-confinement cell or walk-in refrigerator. Close the door behind you, and you’ll find yourself in a 1,1150-cubic-foot room characterized by complete silence. 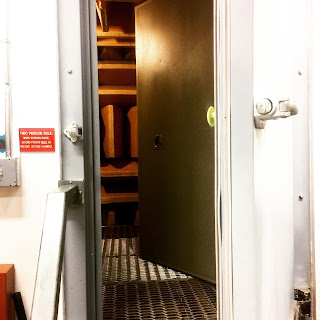 I am escorted into the chamber by Keira Li, a junior studying mechanical engineering at Cooper’s Albert Nerken School of Engineering, and Professor Melody Baglione, the chair of the Department of Mechanical Engineering. (Note: the chamber is not open to the general public.) The moment the door closes behind us, the silence creates a phenomenal sensory bombardment: the auditory equivalent of stumbling upon the Grand Canyon in the midst of a woodland hike.

“Wow,” I exclaim inadvertently—but as soon as I utter the word, it vanishes, eaten up by the room’s walls. The silence is intense, honest, brutal, intimidating in its purity. It seems almost to have a form of its own. People have been known to go crazy in anechoic chambers. Hallucinations occur. Some feel suffocated; others achieve a meditative calm. If you are alone, and particularly if the lights are turned off (not possible during my visit), a claustrophobia of the self can occur. You are met with nothing but the imaginary sounds of silence and the magnified churnings of your own body: your heartbeat, breath, blood. When Keira faced me and spoke, her words seemed to be directed only at me, even to be passing through me—like the most intimate form of communication. But when she turned toward the wall, I could hardly hear her, though she was only a few steps away. 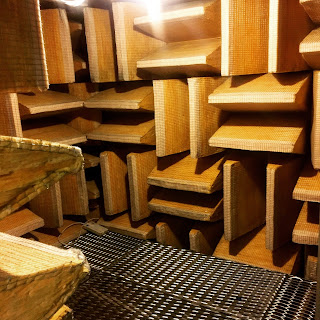 This is because the walls, ceiling, and floor are designed so that sounds produced inside create virtually no echo (hence the term anechoic). For sound researchers and product developers, measurements taken inside constitute a baseline for theoretically ideal acoustic conditions in the real world. This isn’t the quietest anechoic chamber on earth, however: that honor belongs to the chamber at Orfield Labs, in South Minneapolis, which holds the Guinness World Record for the world’s quietest place. Also, they’re not all as tiny as this one. The Benefield Anechoic Facility at California’s Edwards Air Force Base is large enough to hold a fighter jet.

The walls of the chamber are lined in wedges of wire-mesh-covered fiberglass arranged in a checkboard of vertical and horizontal rows. The floor consists of a metal grid set over more foam wedges. Punctured balloons have fallen into the cracks from years of balloon-bursting experiments, which demonstrate the room’s acoustic properties. If the silence isn’t intimidating enough, the wedges appear to loom toward visitors like gaping jaws.

As Professor Baglione explains, “An anechoic chamber is designed to be almost 100 percent absorptive within a specified frequency range. When sound hits a surface, it is either absorbed, reflected, or transmitted. Fiberglass is porous, so when sound impinges on the wedges, it reflects back and forth in the air gaps in the fiberglass and the acoustic energy gets dissipated.”

The wedges’ shape and alternating orientations are intentional. As sound waves approach the V where two wedges meet, they bounce off the sloping wall of one wedge, then the wall across from it, gradually moving toward the juncture where they intersect, by which point all the sound waves have been absorbed. In the real world, the sound waves of the human voice decay after about 0.8 seconds; in here, they decay in 0.035 seconds.

After our voice test, Keira and I sit on the floor and close our eyes, trying to remain as motionless as possible. I hear the creaking of the leather of my sandal, the imperceptible movements of my legs, the whisper of my clothing, and a sort of wheezing that turns out to be my breath entering and leaving my nostrils. Keira also points out a “ghost noise,” a low-frequency pulsing that she’s traced to two machines in a nearby room. (Another student figured out an algorithm to smear out this noise for measurements taken in the chamber.)

Cooper Union students have used the room to study, among other things, low-cost MEMS microphones (like those in iPhones), why a Stradivarius violin sounds the way it does, and the precision of various sound measurement instrumentation. Students also research the more ethereal field of pyschoacoustics, or how humans perceive sound. The department has collaborated with NYU’s Sounds of New York City (SONYC) project, which is researching the effects of noise in outdoor urban environments and training computers to identify the sources of typical city sounds. The chamber has served as a testing ground for various models of low-cost noise sensors to be mounted around the city.

Keira told me she had recently heard a cellist perform in the chamber. Because there’s no reverberation, the sound wasn’t as resonant as it would be in a concert hall. You could hear each tiny mistake, errors that typically would be smudged by the echoes of the previous notes. It turns out there is a place in New York City that can provide not only complete silence but also sound—and communication—that is pure, intimate, and most fully itself. Imagine that.

For more information on the Cooper Union’s anechoic chamber, please visit its website.