Though I am a native New Yorker and have lived in the city for more than twenty years, I had never been ice skating at Rockefeller Center. Like the tourists, every year I pushed through the crowds to gaze down at the lucky skaters twirling and slipping and laughing and holding hands beneath the massive twinkling Christmas tree. But, always, the lines were too long, it was too expensive, the rink seemed too small with the crowds. 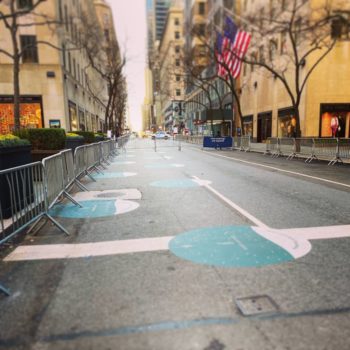 Not so this year. I bought a timed-entry ticket on a Monday and showed up at 9:20 a.m. the next day to a deserted Rockefeller Center. Forty-Ninth Street was a canyon dotted with social-distancing stickers, metal guardrails, and security guards patrolling the emptiness with eagle eyes above dark masks. The music from the rink echoed all the way to the shuttered Radio City Music Hall. 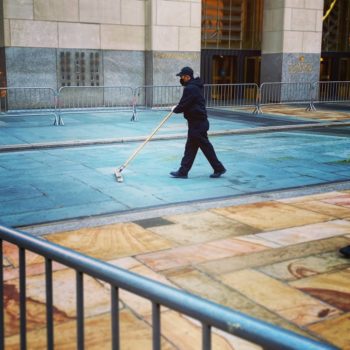 I approached the tree and found I was its only visitor. It was so quiet, I could hear the whisking of a custodian’s broom sweeping up its shed pine needles. It felt like I had a backstage pass to the epicenter of the American holiday season. 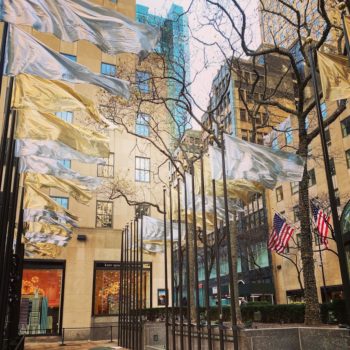 Music streamed out of rink-side speakers—”Run, Run Rudolph,” “Don’t Go Breaking My Heart.” A lone man in a sweatsuit danced by himself on the sidewalk, grinning at me. The pulleys on the gold and silver flags plinked against the flagpoles as they flapped in the breeze. 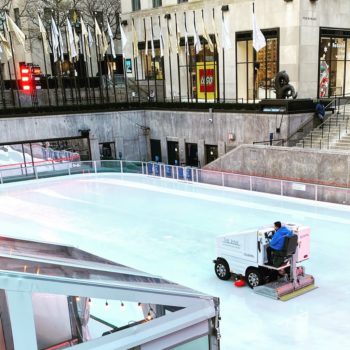 Down below, the Zamboni made its rounds, swishing across the ice and leaving a glassy trail in its wake. 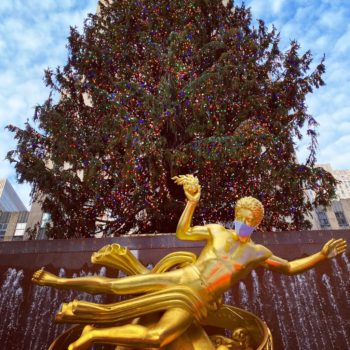 Though I noted that Prometheus was wearing a mask this year, the wire angels lining the promenade blasted their trumpets with little regard to the risks of wind instruments. The line to take the iconic shot from Fifth Avenue stretches around the block most years, but today a guy jogging past barely broke his stride to take a selfie. (Imagine taking a morning jog through Rockefeller Center at peak Christmas season!) 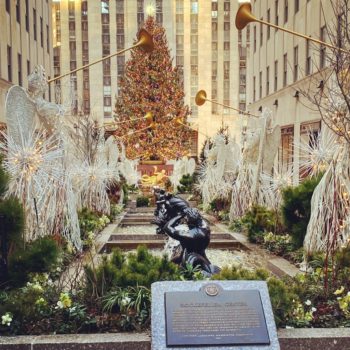 Finally, my appointed time was called and I hopped down the stairs to the rink alongside three or four other people. The rink was so empty, the strobe lights created paths across the ice. 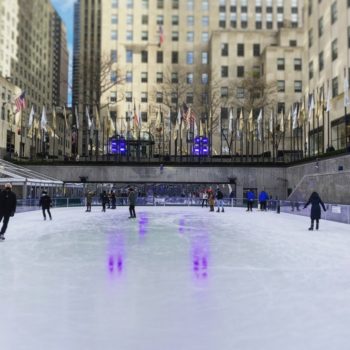 Disinfected skates strapped on, I soared across the ice past the usual suspects, all wearing one mitten and clutching a cell phone in the other hand: the little girl pushing a penguin helper; the hosts scratching across the ice in a wide-angled brake; the diva in Spandex practicing twirls in the center; the giggling couple holding hands and clinging to the side rail; a group of smooth-haired twentysomethings adjusting their “Bonjour Bitches” ski hats before cocking their heads for a photo. It was a rare thrill to speed through Midown, skyscrapers towering above, the scent of pine in the air. 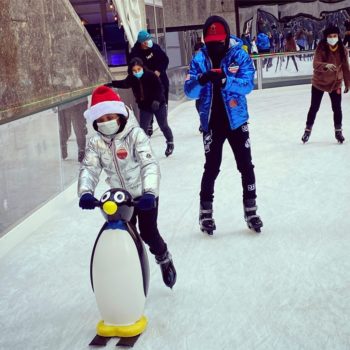 I stopped for my own masked selfie with Prometheus. I could hear the frothing fountain above the strains of “Holly Jolly Christmas.” That supreme trickster tried steal my hat, but there was no one around to notice. 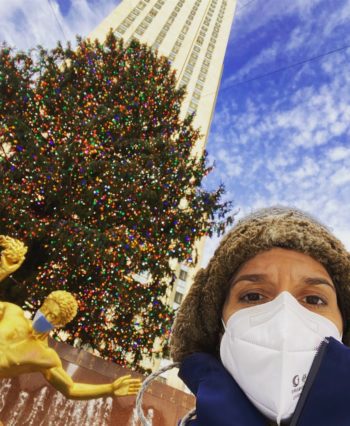