SOUND: Guitars made of wood from the “bones” of old New York City

Every weekend, no matter the weather, Rick Kelly bikes across the George Washington Bridge to the Palisades to see the trees. “I love the trees,” he says. “The trees speak to you.” When he gets back to Manhattan, he usually swings by McSorley’s Old Ale House for a pint. Rick has had his his eye on McSorley’s wood for a while now. He knows that hidden in its grains is not only history but music waiting to be released. 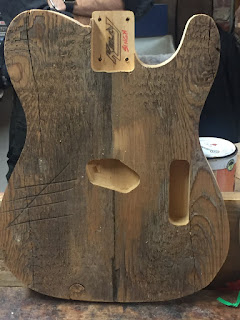 Rick makes guitars made of wood reclaimed from “the bones of New York,” as he always phrases it. He calls these limited-edition instruments Bowery Guitars. His first New York City guitar was made from wood from Jim Jarmusch’s loft; clients have included Lou Reed, Patti Smith, and Bob Dylan, among others he’s too modest to name-drop. The shelves of his storefront and workshop, which occupies the converted backyard of an 1827 speakeasy on Carmine Street, are stacked with beams etched with their provenance, a veritable wooden library of New York landmarks. 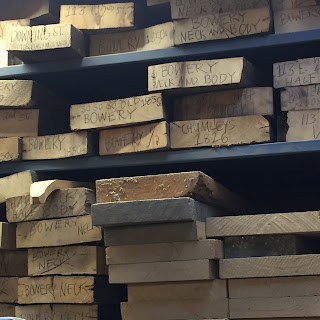 Rick likes to ruminate on how much of the city—from roof rafters to floor joists—is built from “the king’s wood”: during the Revolutionary War, King George put a claim on East Coast virgin white pine forests to use for masts of his navy’s ships, as there were no native pine forests in Britain. The wood from those same forests was eventually brought on barges down the Hudson to build New York City, and it still hides in the frames of some of its oldest buildings.

As Rick discovered, “the king’s wood” is perfect not only for masts but for musical instruments. As the pine ages, its resins settle and create different resonances. Most of his guitars are modeled on 1950s Fenders, and the aged wood makes a new guitar sound almost like a vintage instrument: “Like a best-loved pair of jeans, it already feels loved and worn-in.” 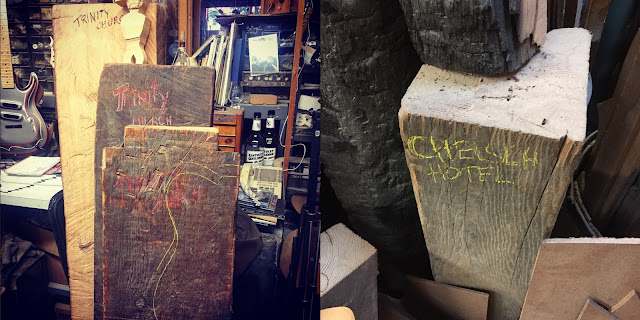 But perhaps more important, each guitar’s tone embodies the character of the building it’s made from. If you listen, maybe you can hear bacchanalian soirees in wood from the Chelsea Hotel, or incantations in the charred beams from the Serbian Orthodox Church that burned down in 2016. Wood from the bell tower of Trinity Church, taken down after September 11 because of heat damage, contains 160 years of ringing bells—and perhaps also resonances of that day of disaster. Imperfections—nail holes, knots, gouges, burn marks—only add to each guitar’s patina. 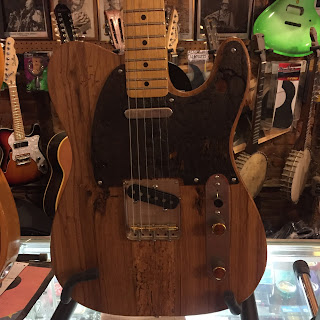 On the morning I visit, he’s working on a guitar made from Chumley’s wood—the same model he made for Bob Dylan, who allegedly asked if his instrument contained dregs of all the beer he spilled on the legendary speakeasy’s floors over the years. Rick says Chumley’s wood always “has that smell, you know when you walk by a bar? Like stale booze.” In a fairly typical acquisition scheme, he acquired the wood one night as he was walking past the bar’s hidden entrance and saw construction workers gutting the building and throwing the old beams into a Dumpster. These days, he often gets tips in advance, but part of the adventure is always stumbling into history as it’s being cast aside. 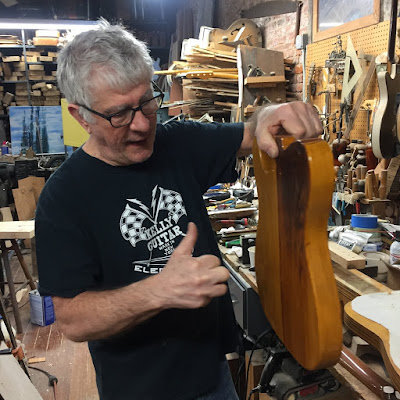 As Rick chisels out the belly of a guitar, he periodically taps the wood to see what note it sounds: “tap tones” are wood’s natural resonances, and there’s only a certain amount a guitar maker can do to influence it. “It’s a vibration thing,” he says. “The guitar tells you what note it wants to be.” 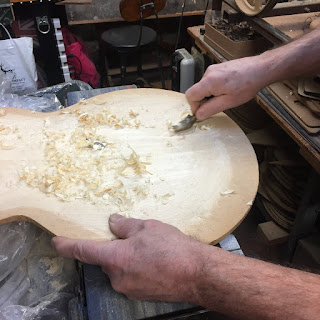 From a guitar’s ingrained tap tones to the personality the wood acquires over generations of city life, each instrument is born not only to play notes but to convey the secrets of the city. Rick would rather see New York’s centuries-old buildings stand, but he figures at least he gets to give these landmarks a new life in music. As he puts it, “Every guitar has a story.”