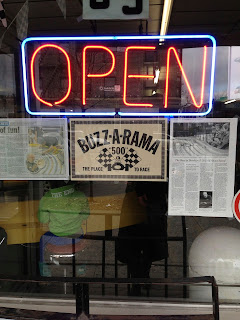 In a low-slung gray building on Church Avenue in Kensington, wedged between Dahill Halal Pizza and the Bengla Bazaar minimart, sits Buzz-a-Rama, the last remaining slot-car-racing storefront in the city. Five racetracks fill the room, their eight color-coded lanes turning and dipping and curling around the room like strips of colored taffy. 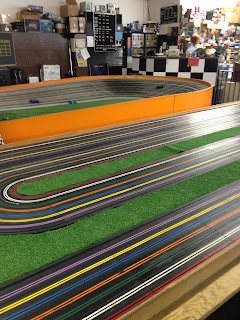 The space, festooned with checkered racing flags, smells as it probably did when it first opened, in 1965, at the peak of the slot-car-racing craze: of ozone, from the sparks created when a car’s slots don’t connect properly with the track. The old-timers will tell you it’s the same smell produced by electric-train sets, something just as unfamiliar as the slot cars to their successors: the young drivers clustered around the track, small fists on their throttles, mesmerized by the sight before them. 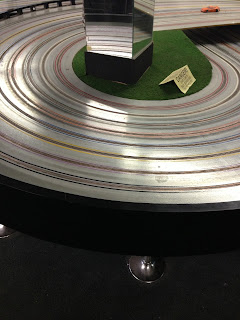 Zinging along the tracks at speeds of up to one hundred miles per hour are the slot cars, and their high-pitched whirring drone fills the room. The buzz and whispery rattle-click of these seven-by-three-inch cars echoes not only the name “Buzz-a-Rama” (actually a reference to the owner, “Buzz” Perri) but the excitement of the hobby. It’s a lightweight sound, with a sharp, metallic quality, from the cars’ chassis, but also the click of plastic, from the shells that provide the aerodynamics and which can be custom designed or purchased as mini-replicas of branded cars (Mustangs, Corvettes, Stingrays). The cars skim along the track in their slots like insects over water. Doo-wop music plays, an ancient fan beats its wings, the children cheer, and occasionally Buzz himself comes out with a megaphone to call the final race. 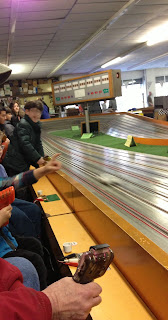 Each car runs on a twelve-volt DC motor and has a piece of metal on the chassis that slides into a slot along the track. Besides the mechanics, the only controllable factor in slot-car racing is the speed, since the cars stay in their track as long as you don’t “de-slot” them—by running them too fast around a curve, for example, a common error. Buzz or his wife, Dolores, assigns each group to a track and each driver to a colored slot on that track. 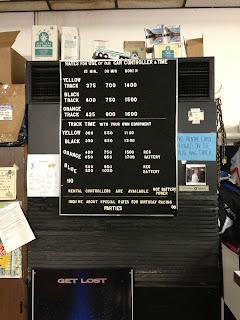 They set a timer for those slots, hand you your car and throttle, which plugs into a socket next to track. Slip your car into your assigned slot, take a seat in a folding chair, push in the trigger, and you’re off! 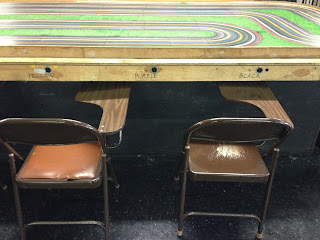 But though the initial burst of speed is irresistible, it doesn’t take long to realize the advantages to releasing the throttle at the approach to a curve, the correct use of the “pulse,” and how to ease the car back to high speed on the flat parts and straightaways. Some of the curves are banked, which requires different manipulation. 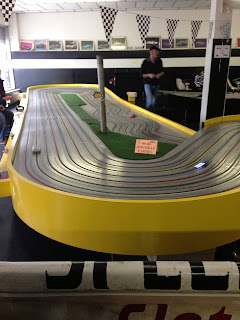 On Saturday and Sunday afternoons—the only times Buzz-a-Rama is open—you typically find a birthday party or two, families sharing a track and righting each other’s cars when they de-slot, and, on the two tracks reserved for privately owned cars, the regulars and aficionados consulting each other as they shave down tires, tweak gears and motors, adjust the chassis to coax their machines to their optimal performance. A dusty shop at the front offers all the supplies an enthusiast needs in a glass case smeared by the curious noses of future Jimmy Johnsons. 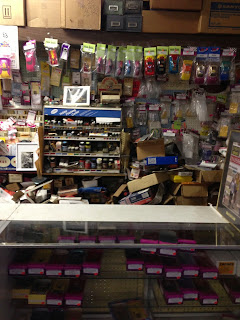