New York Times delivery bags. Martin’s Potato Rolls bags. The plastic around a six-pack of Charmin toilet paper. Narrow black-and-silver-striped bags from the wine store. Have a Nice Day deli bags with a yellow smiley face. Alex Dabagh (“dah-BAAHg”; “Yeah, I’ve heard it all”) can identify each of them, peeking out from the weft of his signature aNYbags, totes made from discarded plastic bags collected around the five boroughs, then woven and assembled in his family’s fifth-floor Garment District factory. The brand name is pun on “a New York bag.” 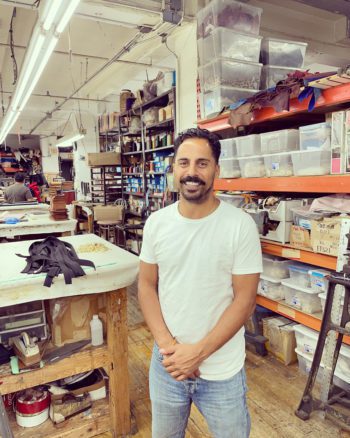 I paid Alex a visit one recent morning with my own contribution: a classic red-and-white Thank You Gracias Thank You plastic bag, given to me by a neighbor with our mail. The small print at the bottom requested that it be recycled—and it had already been reused in its passage to me—but as Alex told me, there’s not much transparency in the stretched-plastics recycling game right now. Bags are collected in bins at chain stores like CVS and Whole Foods, which are supposedly required to recycle customers’ plastics along with the shrink wrap that swaths delivery pallets, but no one really knows where it ends up. “The idea that plastic bags can be recycled is bullshit,” he tells me with a resigned smile. They get tangled in industrial recycling machines and clog them; most just end up in landfills. They can, however, be repurposed. 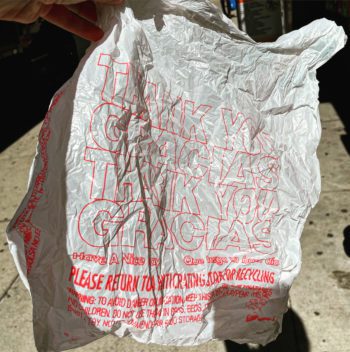 Like many New Yorkers concerned about plastic in the waste stream, Alex, a native New Yorker, takes pains to avoid avoid acquiring plastic bags in a city that still insists on handing them out, despite the March 1, 2020, plastic bag ban. We commiserated about carrying tottering a stack of groceries out of the supermarket, the receipt pinned conspicuously to the top with our chin, rather than accept the five-cent bag or ubiquitous “reusable tote,” which is arguably worse for the environment, as it takes more energy to produce—and we have more of them than we know what to do with. The type of plastic that stretches when pulled is the easiest to recycle and repurpose, and works the best for aNYbag’s looms. In our household, we have a slogan to help us remember which bags and wraps are recyclable: “If it’s elastic, it’s fantastic!” We lug sacks of them to drop-off bins once a month, hoping our collection is put to good reuse.

Park Avenue International, the Dabagh leather-goods factory, has been a family business for forty years, crafting mostly leather bags for fashion designers. Alex says his parents, Syrian Lebanese immigrants, raised him to value sustainability. At home, he quips, they would always “eat the whole chicken”; in their factory, they seldom discarded leather scraps, instead reusing them to reinforce larger bags and even weaving them into a fabric of their own. 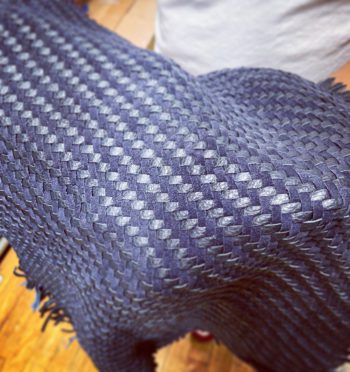 The six-thousand-square-foot factory smells of leather and is filled with the quiet sounds of industry. Sewing machines thrum and rattle over a faint tinkling of Latin music. Brass hammers pound into tabletops. The fluorescent lights hum overhead; a foot-pedal machine punches grommets into webbed strapping. In the weaving room, there’s the metallic snip of scissors, the thunk of the wooden looms, and beneath it all the susurration of plastic bags being pulled out of recycling boxes, sliced into strips, and heat-sealed into long ropes for weaving. “Sometimes, when all the machines are going at once, it’s like a symphony to me,” Alex says, gazing out his office door. At a table in the center of the room, a woman wipes down a completed aNYbag with a cloth, then wraps it in crisp kraft paper, tying the bundle with string. One more aNYbag, off to its new owner, with threads of countless New Yorkers’ daily lives woven into its seams. 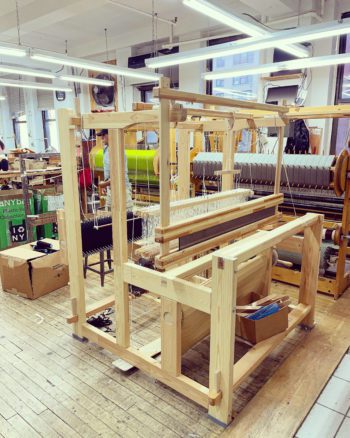 Alex was inspired to weave his first aNYbag when he became fed up with all the stretch plastic that entered their factory. When he mentioned the idea to his dad, “he thought I was crazy,” Alex says. But his mom was immediately on board and headed to their local supermarket to collect plastic bags. Now aNYbag has collection sites at half a dozen elementary schools around the city, and has held show-and-tell sessions at schools and field trips to the factory to educate kids about responsible reuse. He estimates that aNYbag has diverted 13,000 pounds of stretched plastic—or about 650,000 bags—from landfills in the past year and a half, with 8,000 pounds of bags waiting in the factory basement. Six employees craft about 16 aNYbags each day: four prepare the plastic (cleaning and cutting out labels) and two weave them. Here’s the process: 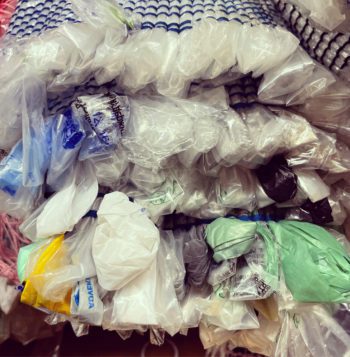 First, bags are collected in boxes and bins at aNYbag’s sites around the city. 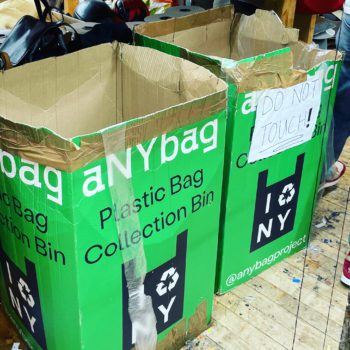 They are then cut into strips a few inches wide, which are heat-sealed into longer strips. 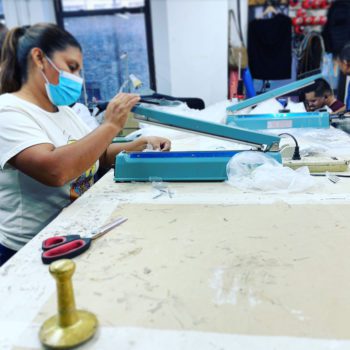 They don’t have enough staff to color-sort the plastic to make aNYbags of a single color, though one delightfully blue bolt of fabric was made entirely out of New York Times delivery bags, on special order. 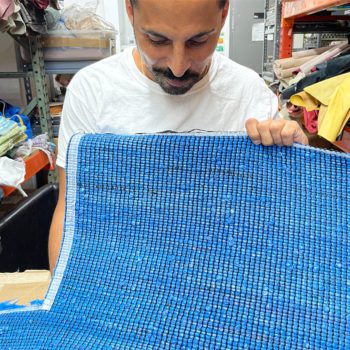 The charm of an aNYbag is its pops of color and the glimpses of the original markings that peek through the cotton warp: flowers, brand insignias, Nutrition Information charts, random words. In looking at the fabric close-up, you realize how effective modern branding is, to be recognizable even in a sliver. 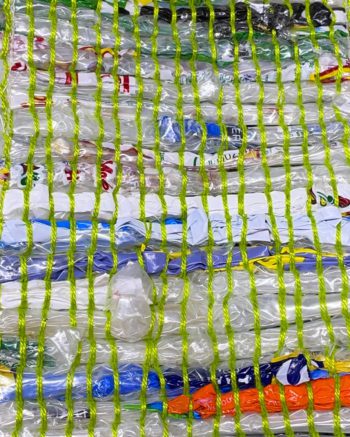 The warp—thick cotton thread in a single bright color—is strung on a special rack and fit into the loom. 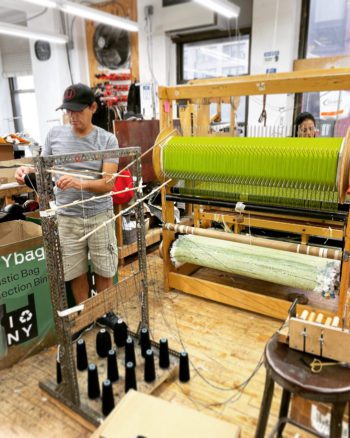 The long strips of plastic are wound around a wooden shuttle, much as yarn would be, and hand-woven through the warp on the loom, which clacks and clanks as each new row is added. 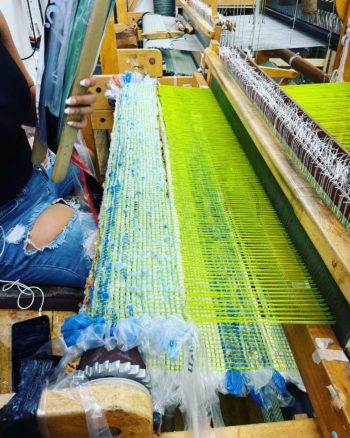 aNYbags are sold only online at the moment. More than 60% of the profits goe directly to the artisans who hand-weave the bags, a labor-intensive process. Alex’s goal is to expand the aNYbag production to a larger site, perhaps in the Brooklyn Navy Yard, and train underserved job seekers, such as the recently incarcerated or mentally disabled. “I want to give back to my city,” he says. “We want the process to be visible and traceable.” The bag that held the bread for a third-grader’s sandwich in Bay Ridge; the grocery-circular bag that that slapped onto a stoop on the Upper West Side; the Elmhurst bodega bag that carried a can of malt liquor and sunflower seeds one Saturday night; the Bubble Wrap that cushioned a new part for a speedboat in Marine Park: Each bag tells a story, even though it is cut from “the one thing that nobody wants,” as Alex puts it. “We’re all cut from a different cloth. We’re all New Yorkers.” 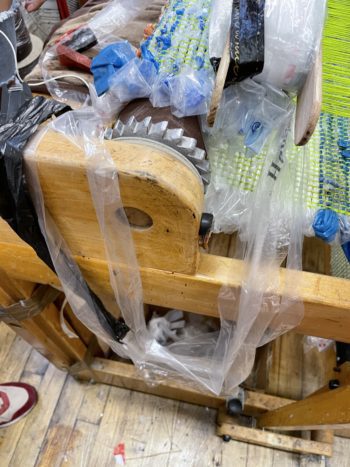