SMELL: The engine room of the tugboat Pegasus

New York City harbors a small but vibrant community of restored ships and workboats. Among them are the fireboat the John J. Harvey, which was brought out of retirement to assist in 9/11 rescue efforts, Lehigh Valley Barge No. 79, which houses Red Hook’s Waterfront Museum, the once-sunken lightship the Frying Pan, the oil tanker the Mary Whalen, the steam-powered lighthouse tender the Lilac, and the tugboats the Cornell, the New York Central No. 113, and the Pegasus. 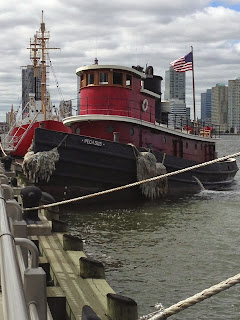 All have fascinating stories, as do their owners, who wrangle the funds, supplies, berths, and volunteers necessary to maintain and operate these ships for education, tourism, and, occasionally, the work for which they were built. 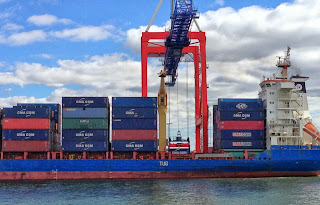 I am fortunate enough to volunteer on the tug Pegasus, built in 1907 to serve Standard Oil’s waterside refineries and terminals, and now owned by Captain Pamela Hepburn, with a cushy seasonal berth in TriBeCa.

On my inaugural trip, on a misty Sunday afternoon, the Pegasus was hosting a family from Austin, who had chartered the boat for a two-hour trip as a birthday gift for the father. He had worked on a tug in the army, and his wife and son told me it was his dream to ride on a tug again. As soon as the lines were thrown and the wake began to churn, I thought I could see the memories flitting across his face. 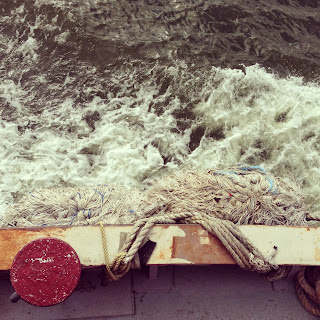 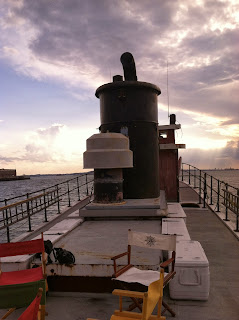 Onboard a tug, it’s impossible to escape the presence—and especially the smell—of the engine room, which in the Pegasus’s case houses a nine-hundred-horsepower General Motors diesel engine, converted from a steam-powered engine in the 1950s. 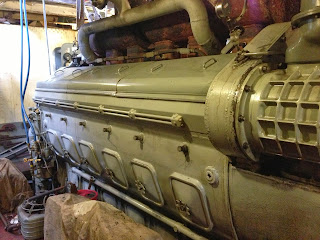 The heady smell wafts from the engine-room door, a viscous mix of tar, diesel, engine oil, salt water, mildew, paint, and fanned hot air. No one but the captain and engineer are allowed in the engine room while the boat is under way, but you can catch a glimpse of the machinery through the slots in the grille floor and down the rickety metal staircase. 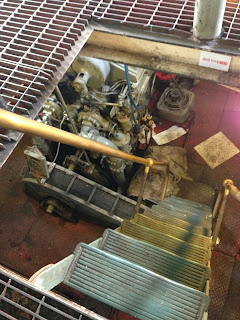 The gear arrayed in the engine room echoes the sweat and no-nonsense power of this engine: safety ear muffs, chains, lines, work gloves, spray bottles, chains, and wires were draped over the railings, and buckets, fire extinguishers, and even an ax were arrayed beneath the peeling cabinets. 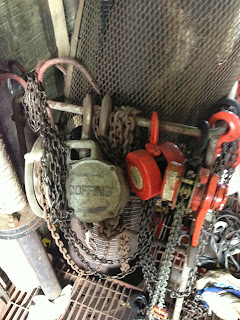 A fellow volunteer once gave me a tour of the engine room; the thrumming of the engine makes it impossible to hear, so I got only a sense of how exactly all the hulking metal tanks, gears, gaskets, and spigots were connected. 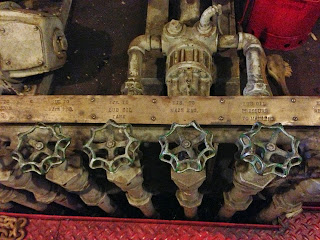 Being close to so many ancient and powerful parts, slicked in oil and churning away, I felt worlds apart from the breezy deck above, and I had a sense of why so many people love tugboats: the capable, cheerful exterior coupled with the immense power lurking beneath. 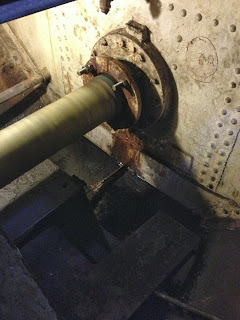 Up in the bridge, Captain Hepburn was turning the tug around beneath the Brooklyn Bridge with a tiller no larger than her thumb. 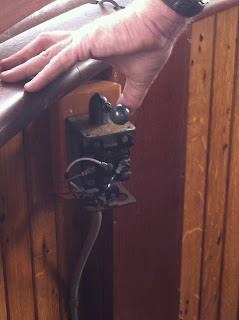 The Austin father stood right behind her, gazing across the river, where a rainbow had sliced through the mist and made an arc over lower Manhattan. Someone poked their head in with a Tupperware tub of homemade chocolate-chip cookies. Out on the deck, a chart weighed down with two steel pulleys flapped in the wind. 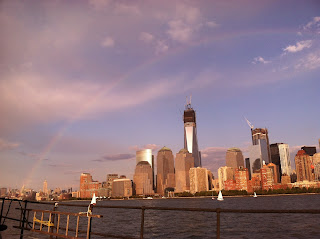 To find out more about the tugboat Pegasus, including upcoming cruises, events, and charter opportunities, see http://www.tugpegasus.org/.

0 thoughts on “SMELL: The engine room of the tugboat Pegasus”