It is said that the flavor of a whiskey is imbued with the scent of the place it is brewed. So it follows that the bourbon barreled at Kings County Distillery, located in the Brooklyn Navy Yard, should take on some of the aromas of this historic industrial zone. One autumn day, I went on a tour of the distillery to take in the smells of the Brooklyn brewing process. 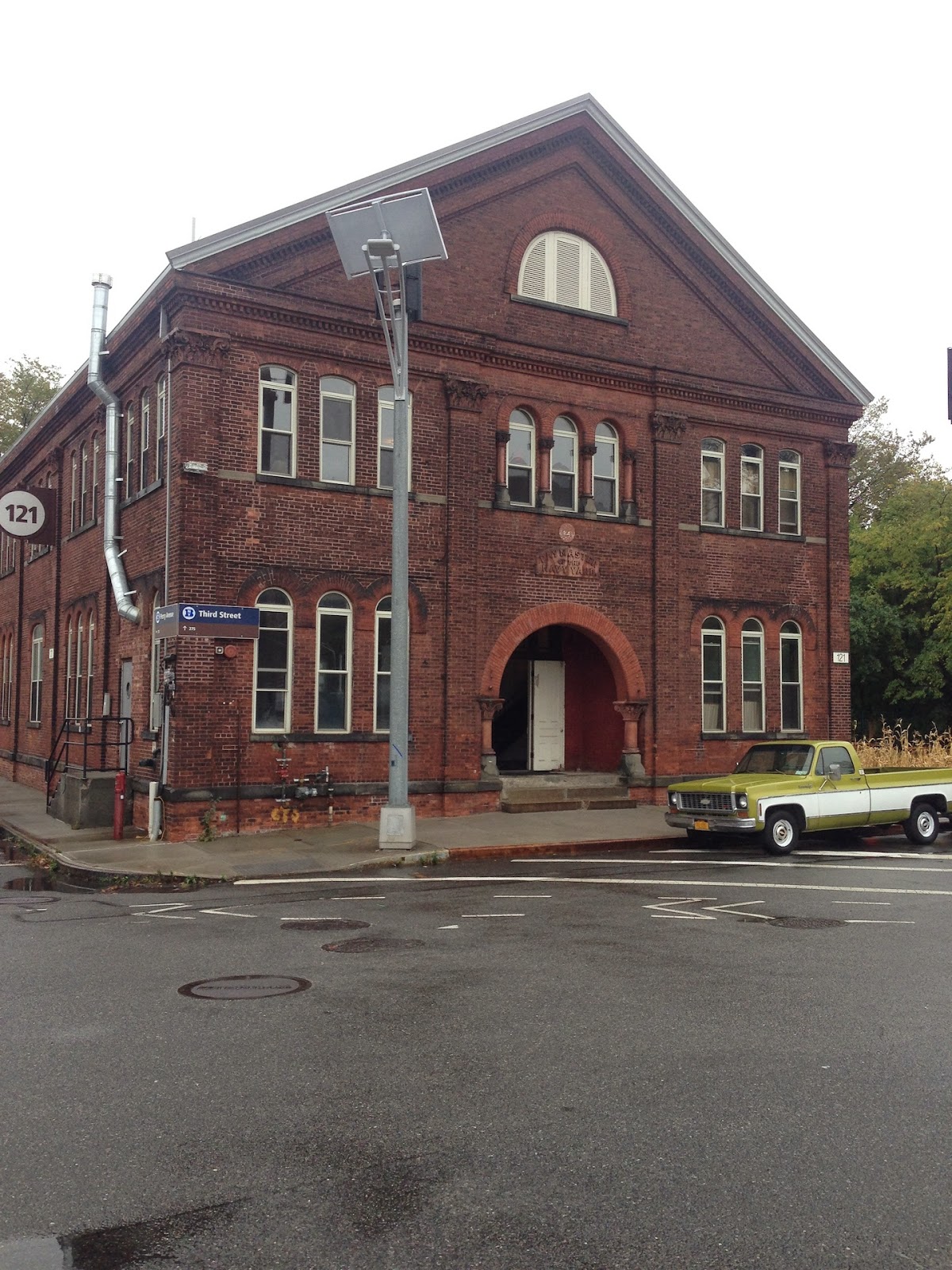 At only four years old, Kings County Distillery is the oldest distillery in New York City and the first to open here since Prohibition. (The first distillery in the United States opened in Staten Island in 1640.) It’s housed in the old brick Paymaster Building and has a jewel-box corn and barley field beside it, from which the company produces about three gallons a year of local Navy Yard whiskey (not for sale). 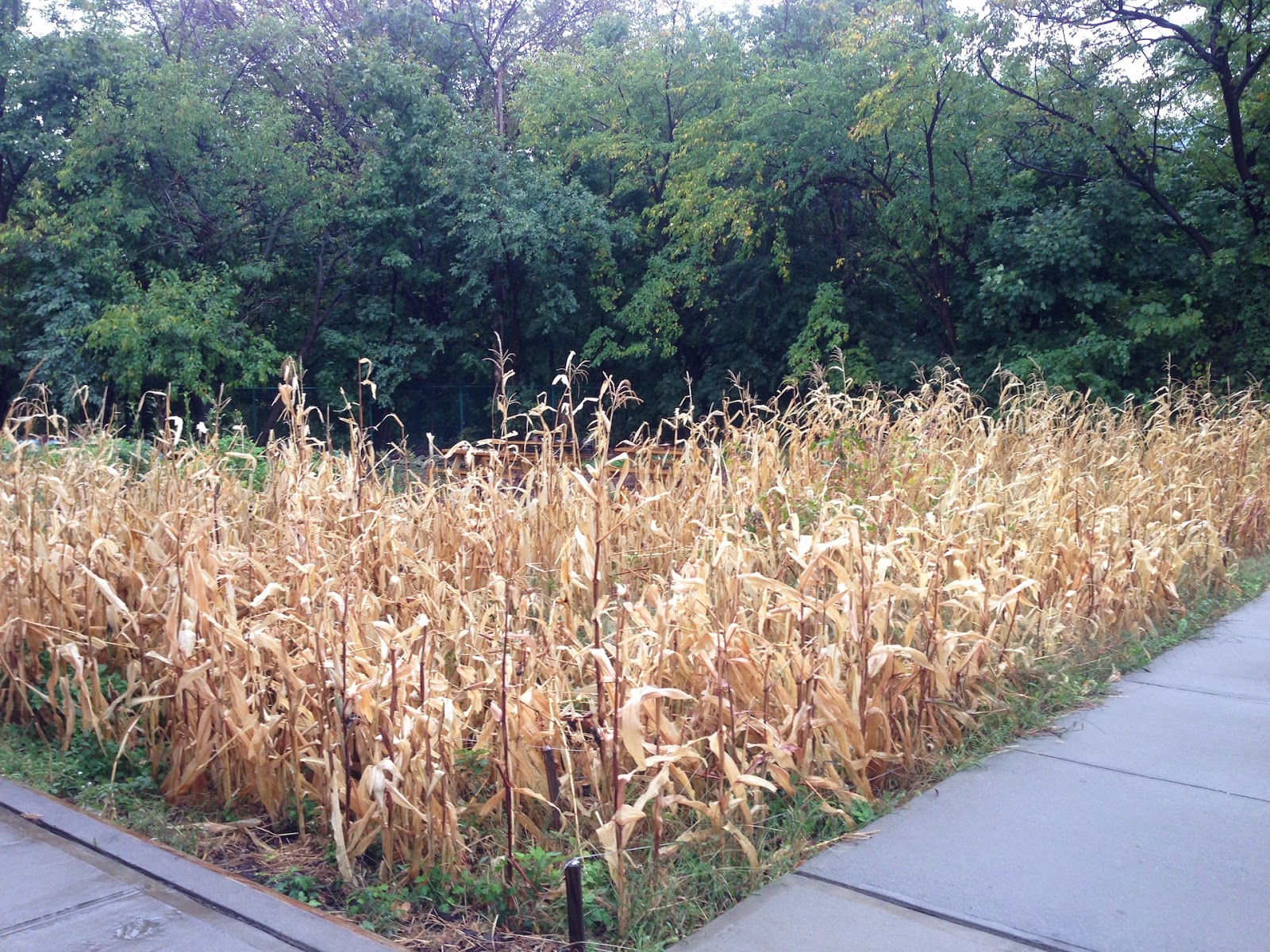 The whiskey is aged in barrels stacked in the twin turreted gatehouses at the Sands Street entrance to the Navy Yard. Squashed kernels of stray corn trace a Hansel and Gretel path between the gatehouse and the distillery. 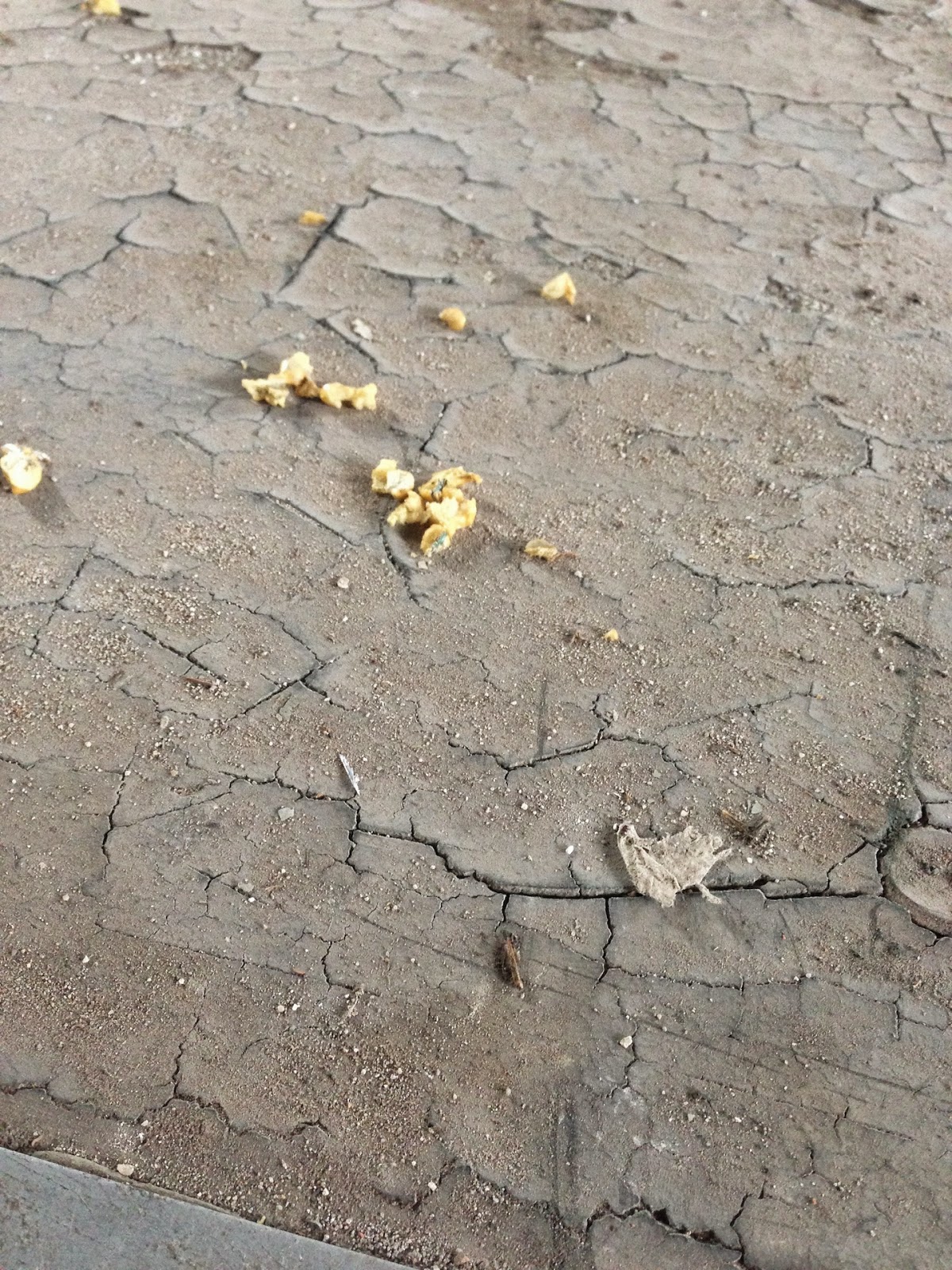 The smell hits you as soon as you enter the ground-floor fermentation and distilling room: tangy, pungent, malty—like yeast and like vinegar and like alfalfa. Somehow the smell manages to be both moist and dusty. 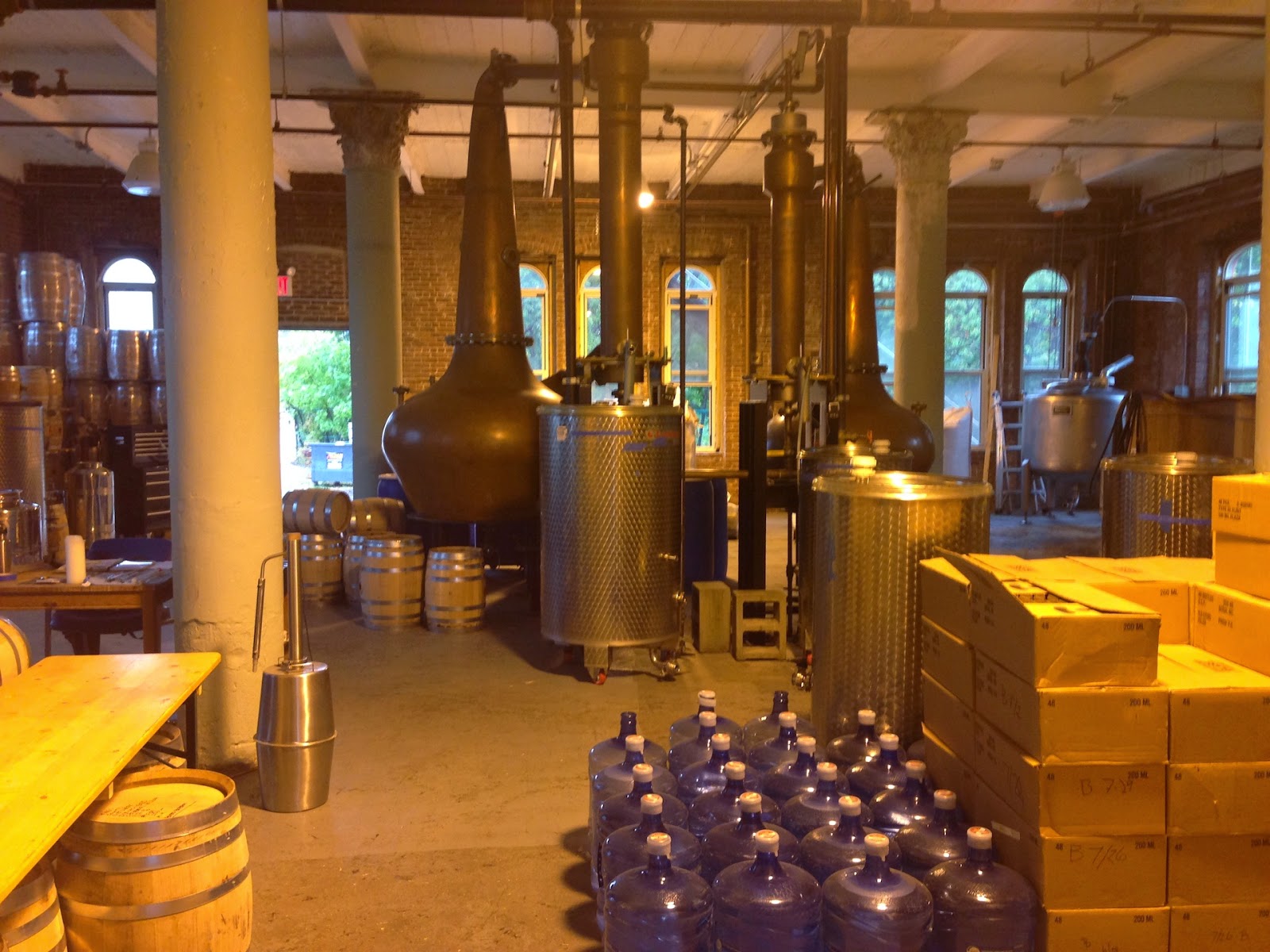 Industrial bags of white corn wait on pallets next to the fermentation tanks, where the corn will get heated up along with yeast to form a bubbly vat of “grits.” Since three hundred pounds of corn will ultimately distill into twenty-five gallons of spirits, it’s no wonder the air is redolent here. This viscous stew will sit in the vat for five days, revolving slowly with the force of its own fermentation, until it becomes a sort of corn “beer.” The vats have no cover, which allows the brew to take on the flavors of the air, which, when I visited, smelled like wet leaves with undertones of tar and tire. 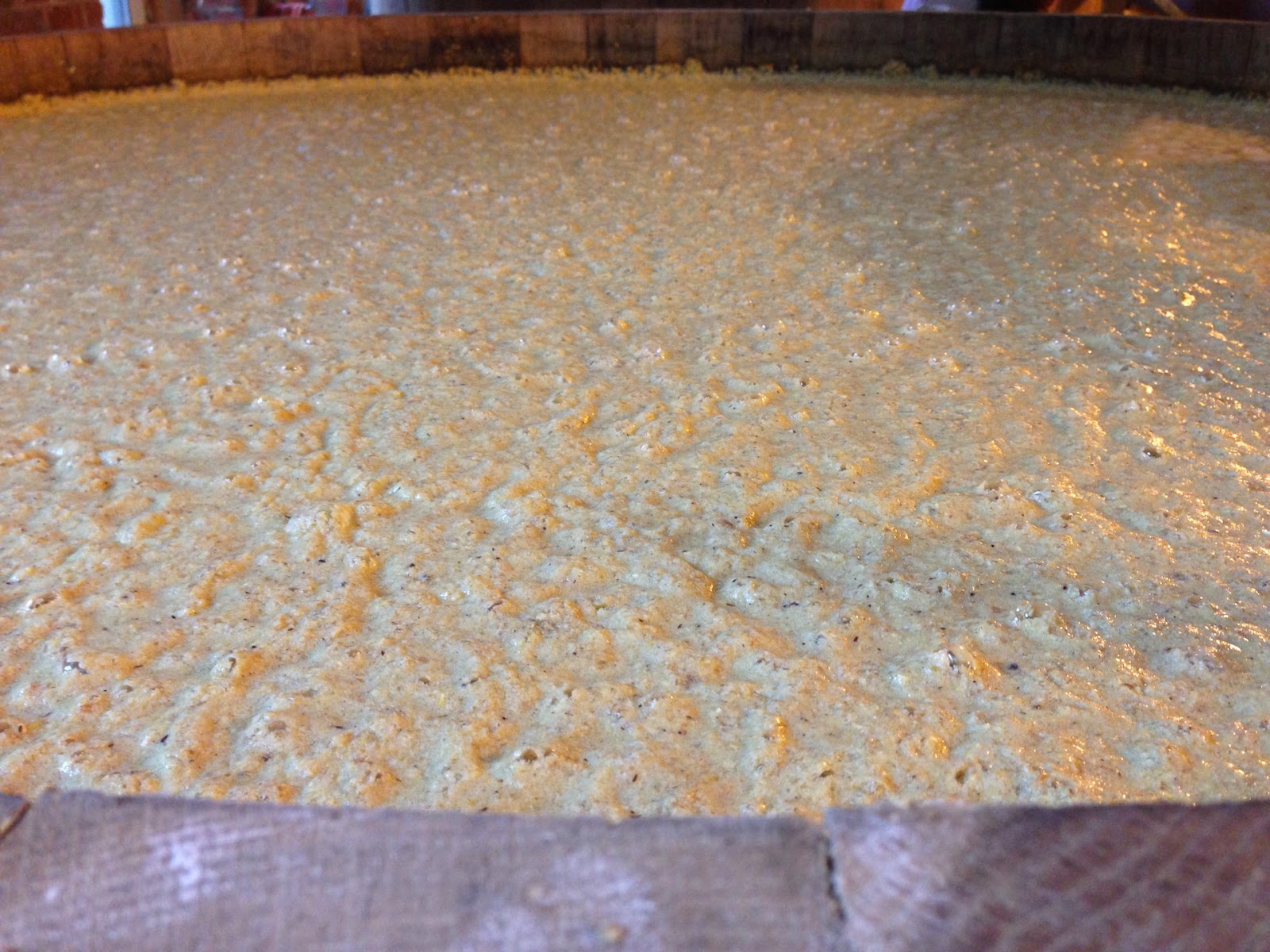 Next comes the distillation process, where the alcohol that’s formed during fermentation evaporates out of the corn brew in the copper stills that sit at the locus of the room. 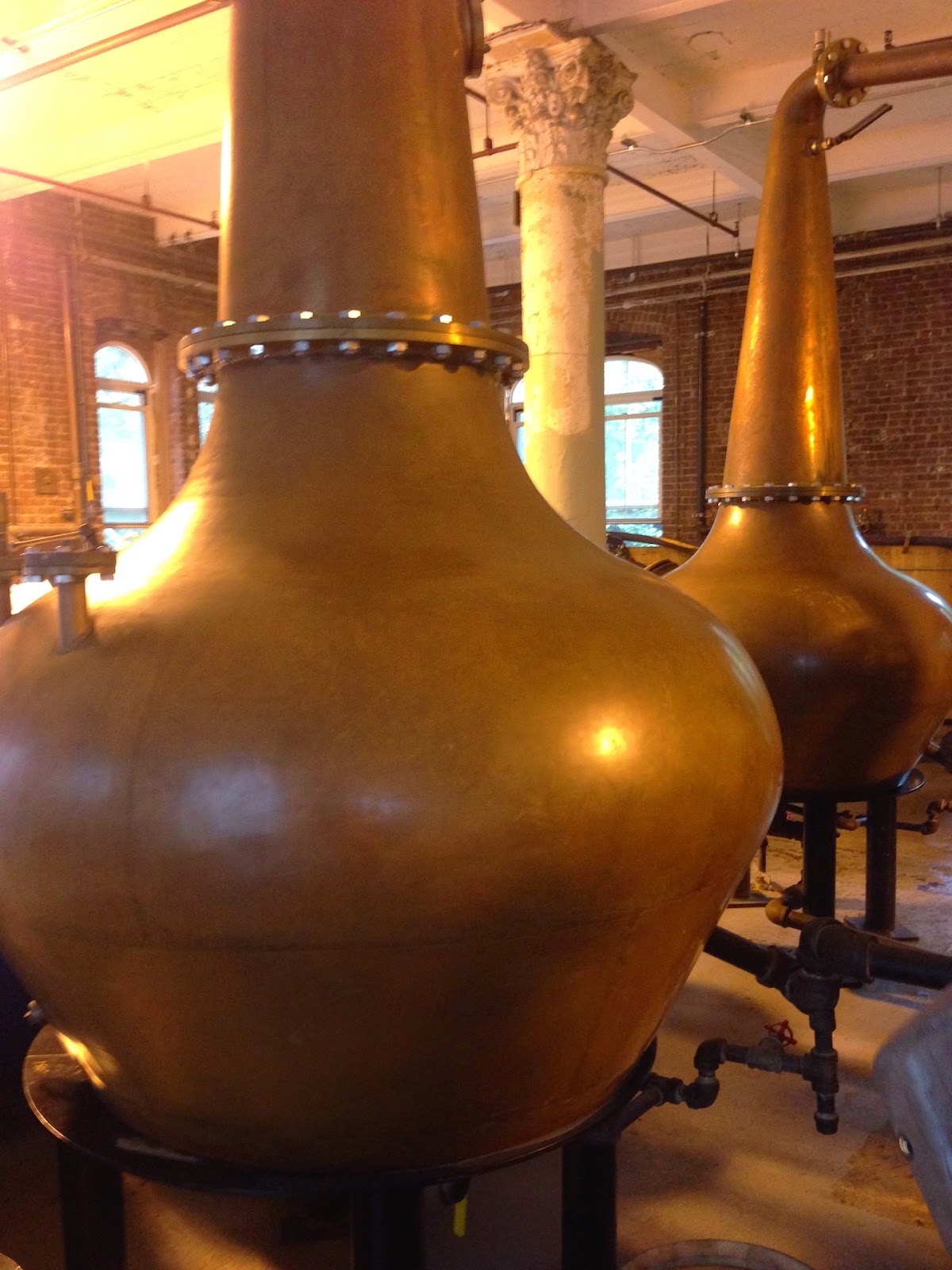 The unripened whiskey that emerges from this process, called “moonshine,” has a raw, searing taste—especially when slugged from one of the distillery’s signature glass hip flasks. But to begin its transformation into bourbon, the moonshine is poured into new oak barrels (one of the legal requirements of the “bourbon” label) and carted away to the Sands Street castles, where it rests for seven or eight years under the watchful eye of the round tower window. 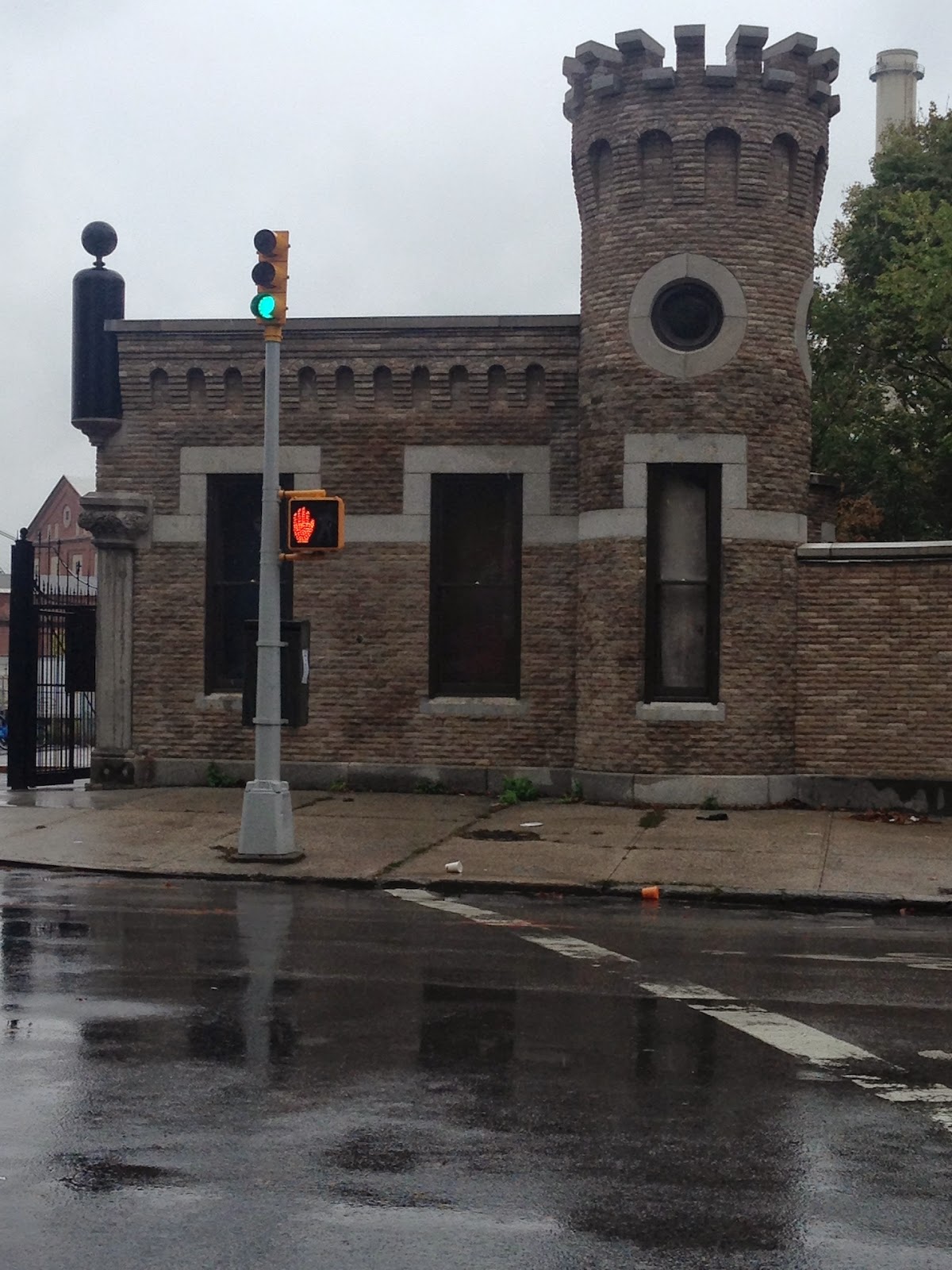 From the peeling paint to the gaping holes in the walls, from the faded NYPD logo on one wall to the vines that creep across the backyard, the gatehouses have a musty and decidedly sinister atmosphere suffuses the whiskey during its residence there. 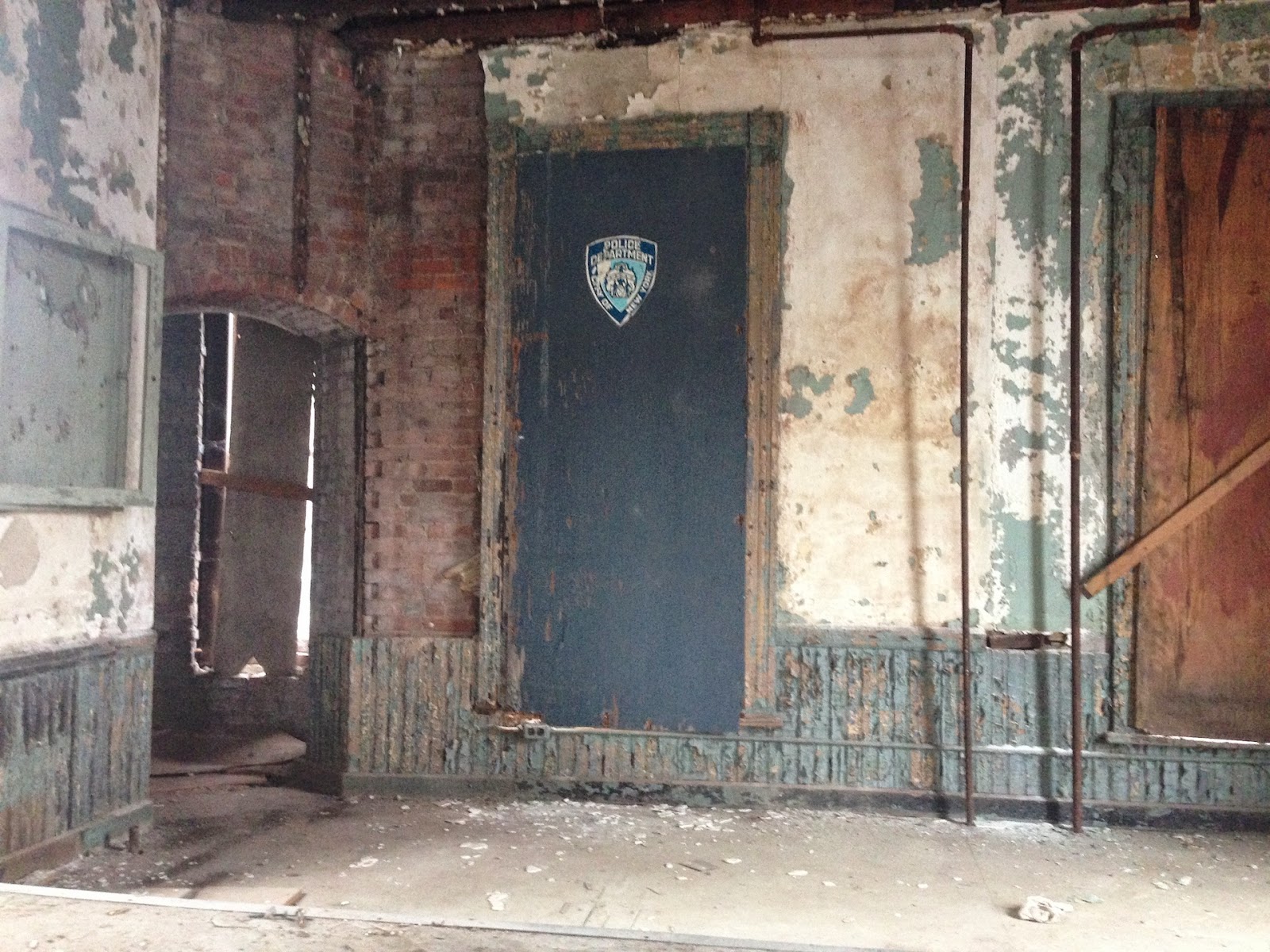 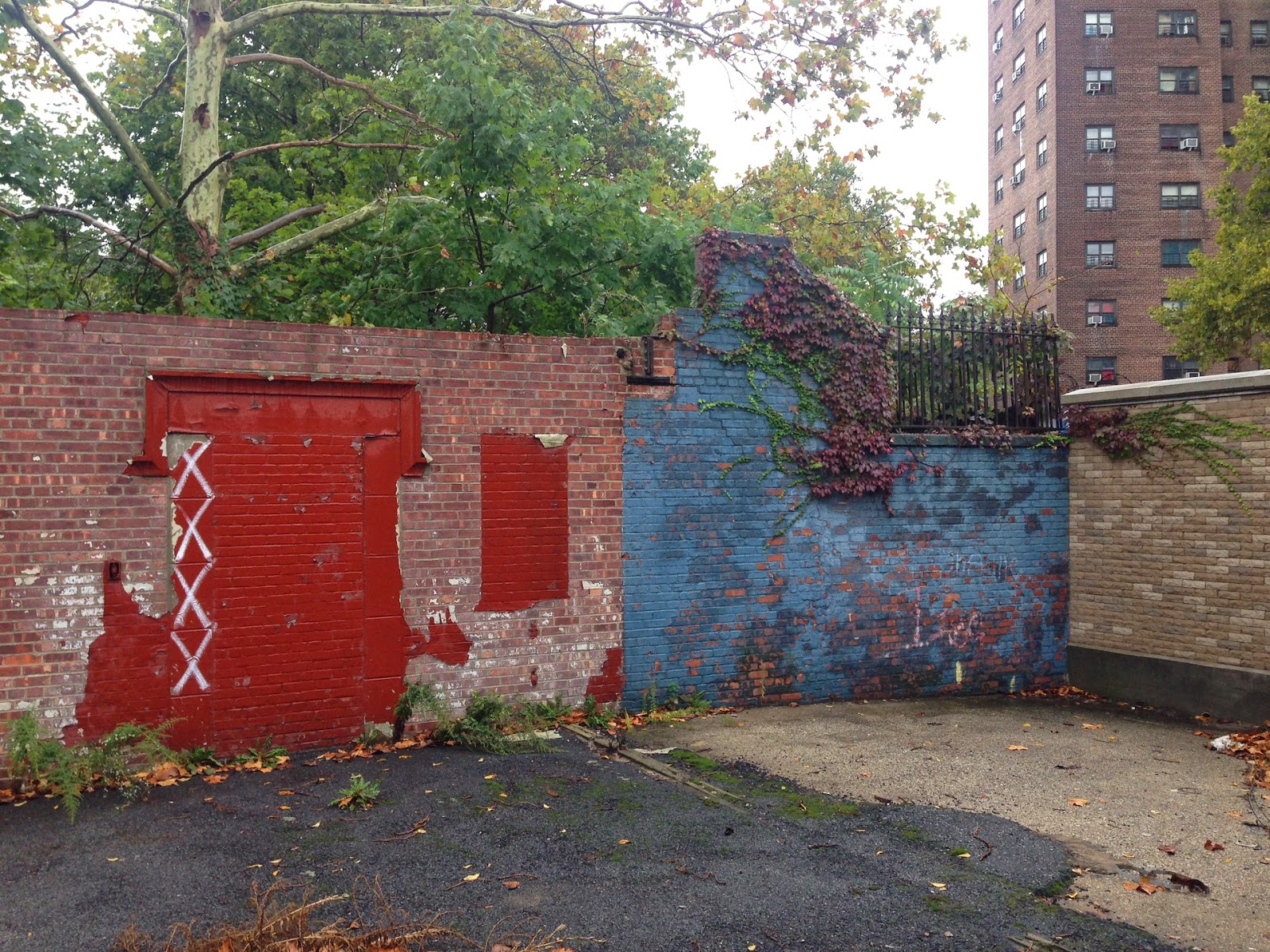 This seems all the more appropriate for a bourbon that is brewed in Vinegar Hill, which used to be known as “Irish Town” for the whiskey makers who fled to the neighborhood from Ireland to avoid the high taxes being levied on distillers there. Allegedly, the cobbled streets of the area became “rivers of whiskey” during the so-called Whiskey Wars: the post–Civil War government crackdown on tax-evading distilleries in the area. All this local history no doubt still lingers in the air, imbuing the oak barrels with the spirit of freedom and rebellion. 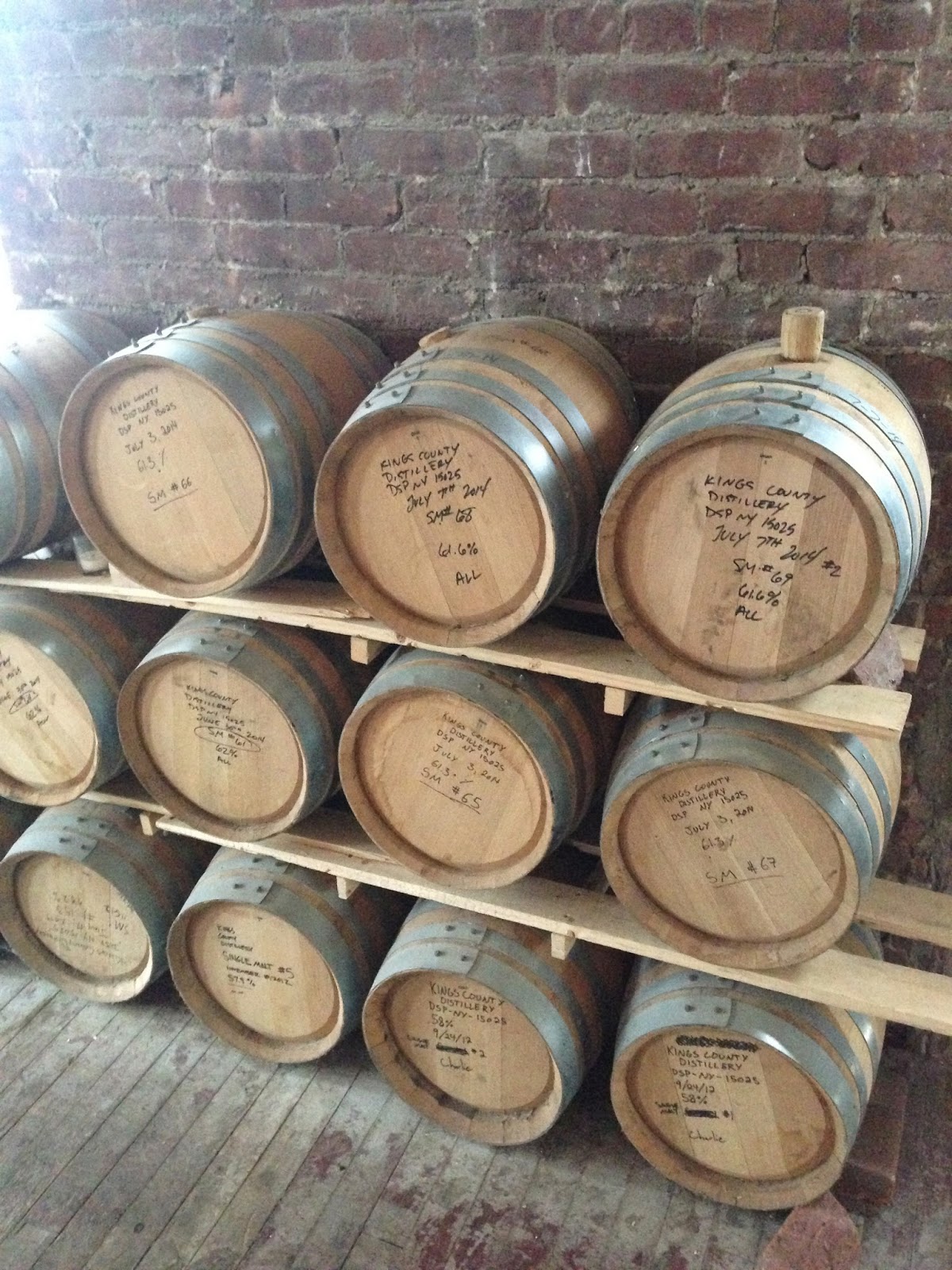 It might be a stretch to say that a swig of Kings County Distillery bourbon tastes of the smell of wet leaves and tire rubber, of peeling paint and whiskey-soaked cobblestones—but it’s a good bet for passing around on a tar-paper roof in Brooklyn on a chilly autumn night.