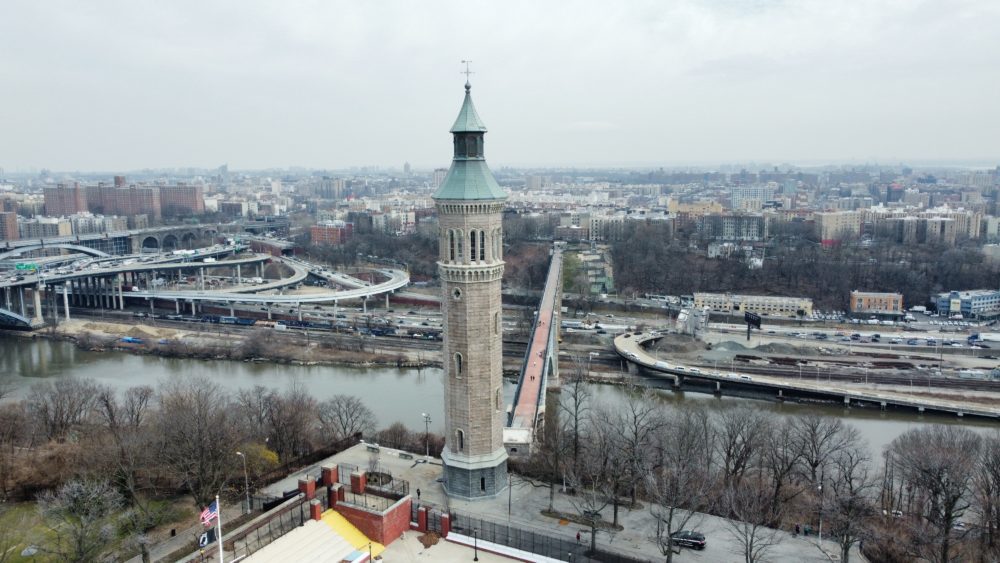 The Highbridge Water Tower soars two hundred feet above the shores of the Harlem River in Washington Heights. It overlooks a tangle of interchanges for I-95 as well as the High Bridge, the oldest surviving bridge in New York City. 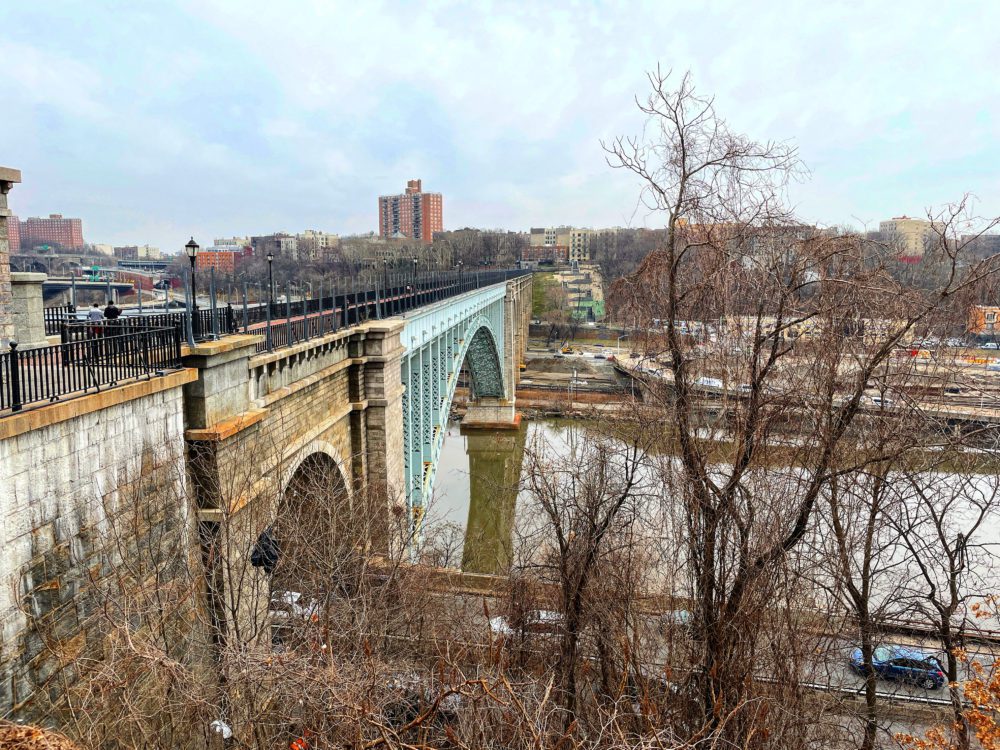 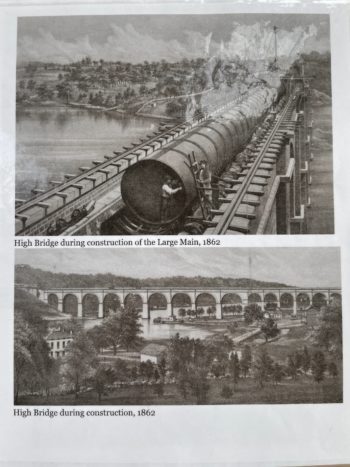 The underbelly of the pedestrian walkway, which connects Manhattan and the Bronx, houses massive pipes that once brought fresh water through the Croton Aqueduct system to northern Manhattan. The forty-mile-long system relied on gravity, and the Central Park Reservoir, about a hundred blocks downtown, was the highest point from which water flowed. Prior to the 1975 opening of the Highbridge tower, it had been a challenge to achieve sufficient water pressure for modern plumbing systems (such as showers and flush toilets) in the neighborhood, most of which was at a higher elevation than the reservoir.

The octagonal tower once held a forty-seven-thousand-gallon water tank. A steam-powered pumping station near the base pumped water into the tank from an adjacent reservoir—now a vast public swimming pool. As the water flowed back down from the tower down into city pipes, gravity created water pressure. 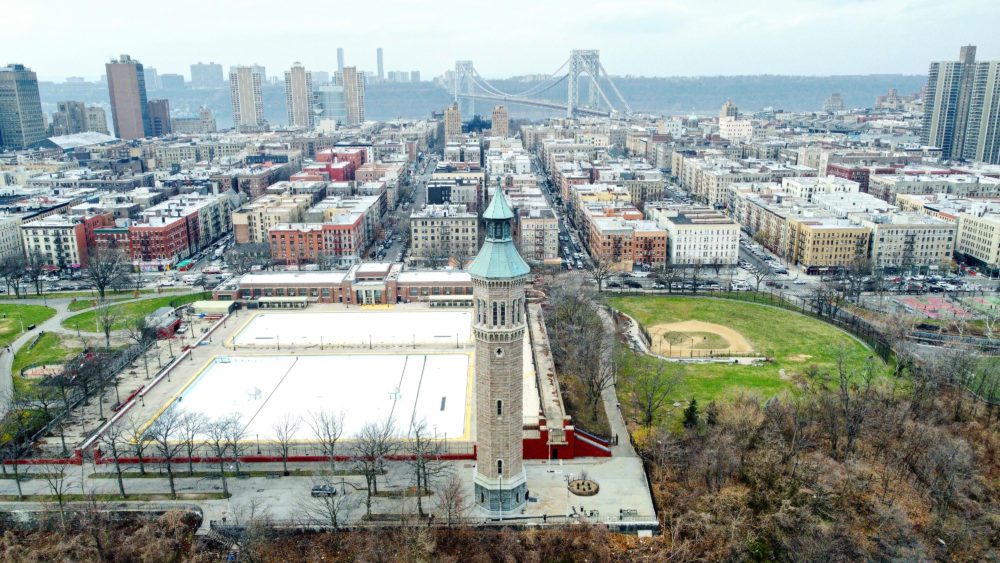 Because of this innovation, the Highbridge tower was in part responsible for the transformation of northern Manhattan into a vibrant residential and commercial area. The pedestrian bridge over the Harlem River allowed people to walk easily between boroughs, aiding access to the neighborhood. 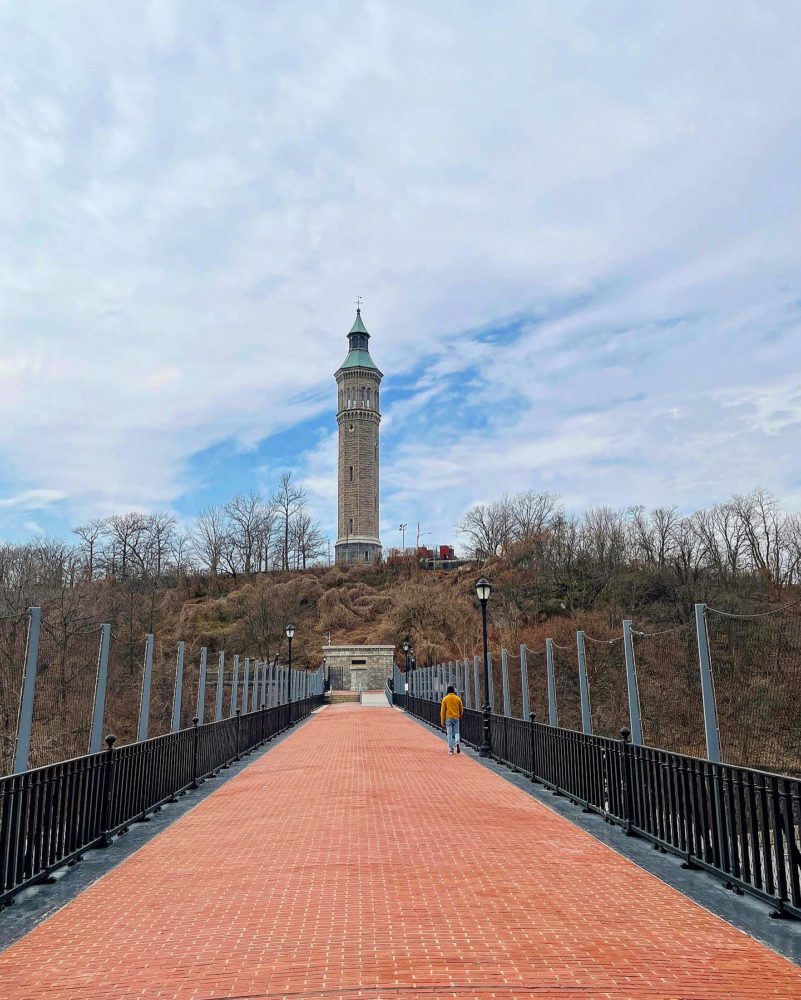 After closing in 1949, when an electric pumping station took over its job, the tower reopened in 2021 after a $5 million restoration and is occasionally unlocked to the public for tours by the Parks Department. When I stepped inside, the first thing I noticed was the smell: mineral, drafty, like iron and rainwater, with undertones of pine from the fresh plank flooring at each landing. 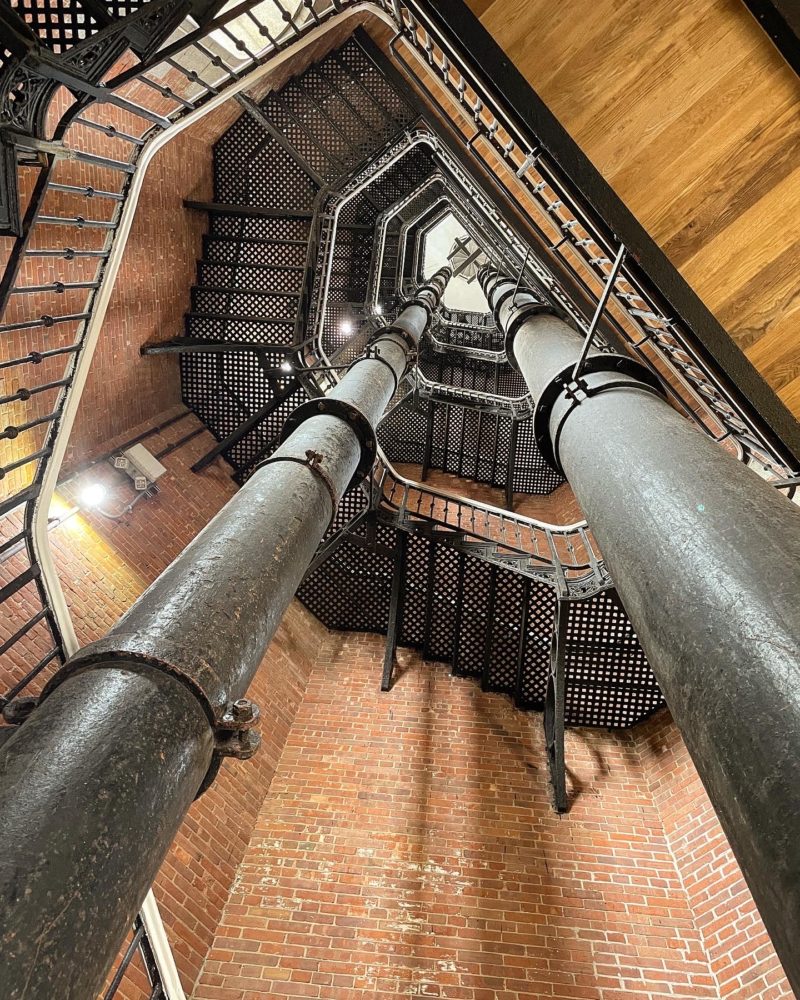 As I climbed the 174 steps to the top, the metal banister was refreshingly cold and smooth against my palm, like a long sip of ice water. 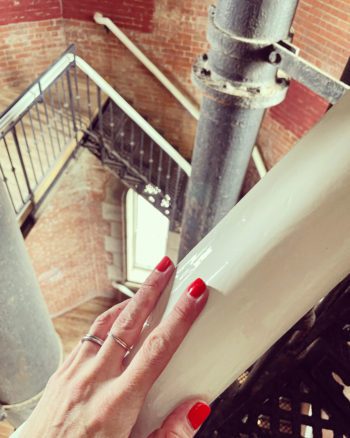 The staircase unfurls pleasingly, like a pencil shaving, and the risers are not too high, making it a fairly easy climb. At each level, the stone walls are a palimpsest of paint and brickwork, with stenciled numbers marking each level. 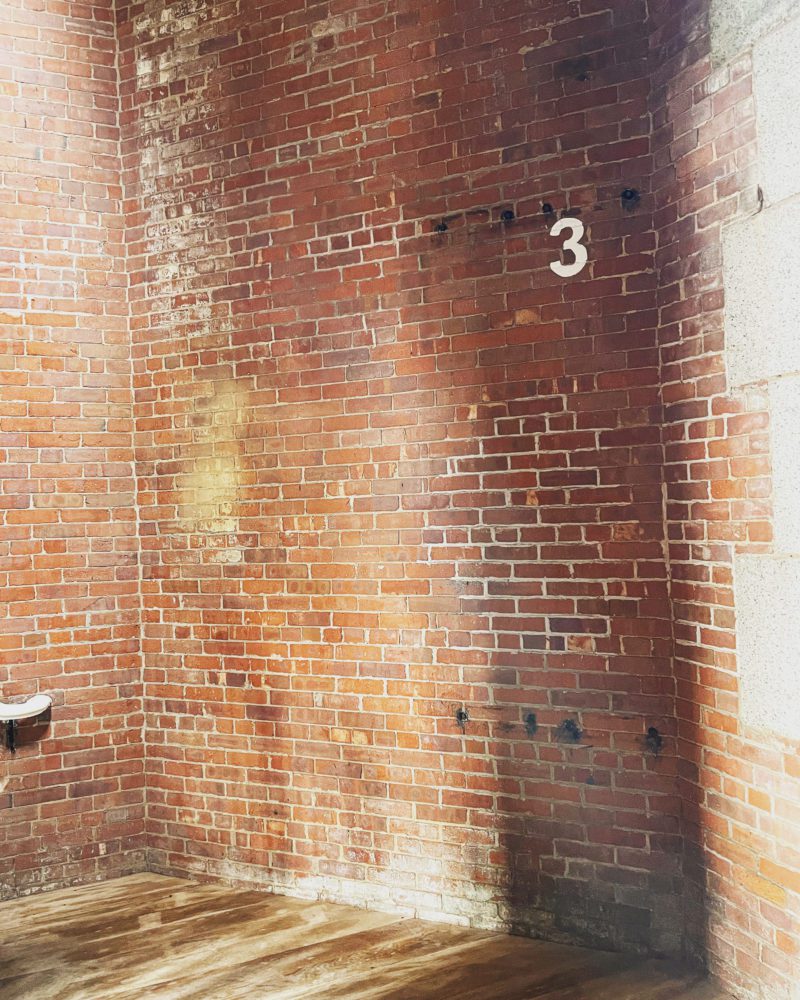 The lacy iron treads crosshatch the dizzying view below. 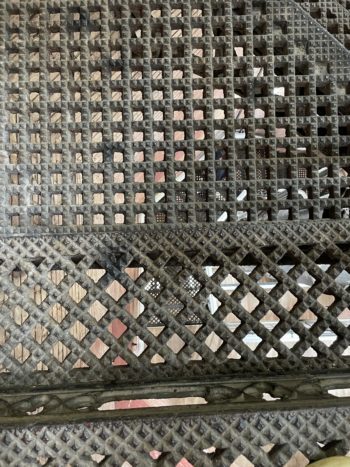 The churchlike windows at the top were once used for tank inspections but now offer views of the High Bridge, the empty swimming pool, and the distant towers of Manhattan. 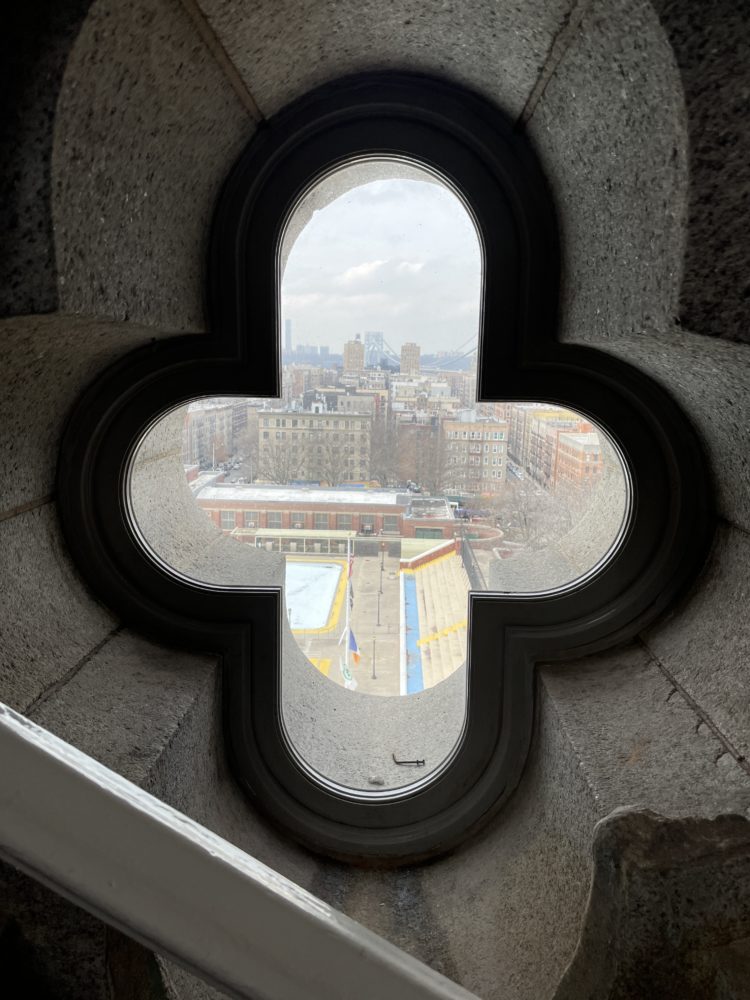 A smaller staircase spirals from the viewing area to the peak of the tower, where in the late 1950s an electric carillion was briefly housed and rang out a few times a day. There was also once a viewing platform up there that provided the highest vantage in Manhattan at the time. 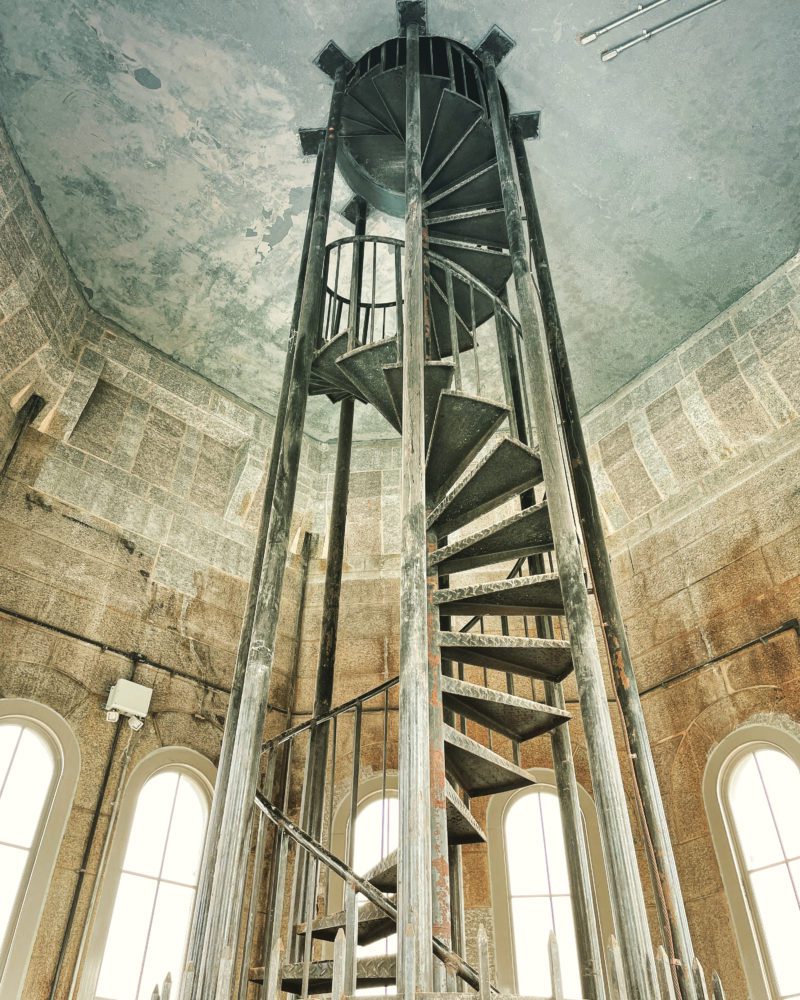 Just below the stair are the capped pipes that once carried the pumped water up into the tower. 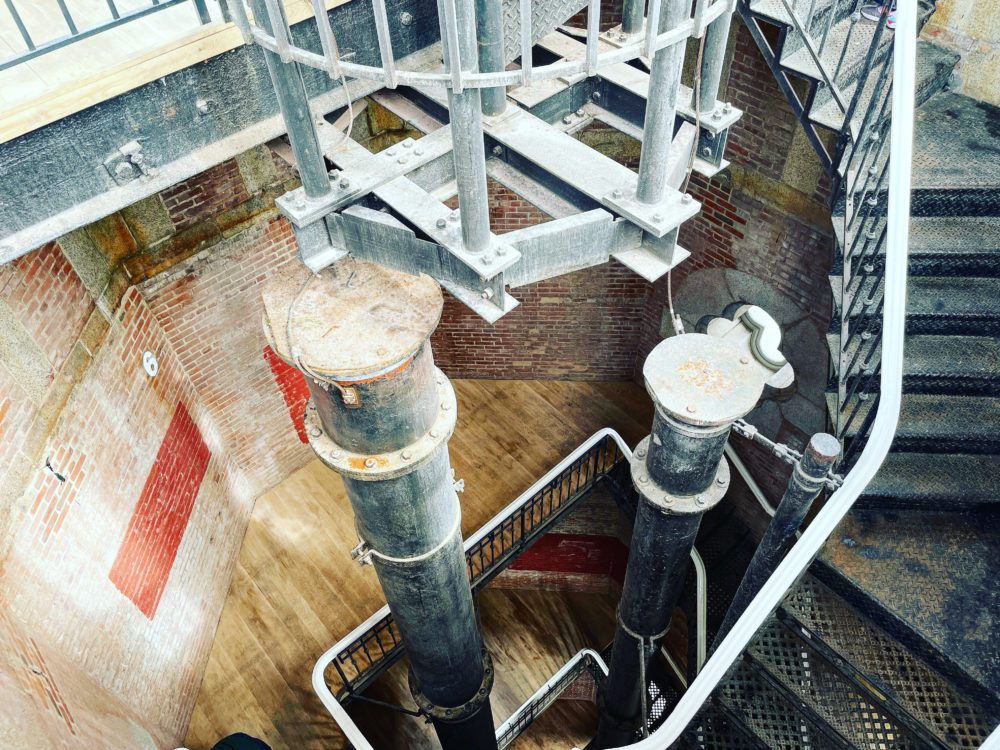 Outside, in the shadow of the Highbridge Water Tower, ants are starting to erect their own towers, with their own complex infrastructures, invisble to the naked eye. But their subterranean churnings raise the mineral, damp, and urgent smell of spring. 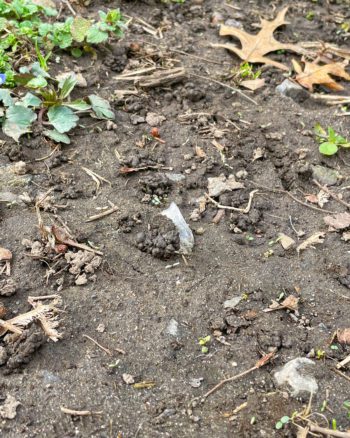