It’s 5 a.m. in Midtown on Valentine’s Day. The only sounds are the buzz-click of changing traffic signals and the swish of a stray cab through puddles. The sun won’t rise for another hour or so.

But turn onto West Twenty-eighth Street between Sixth and Seventh avenues, and the scene changes abruptly. This is the hub of the Chelsea Flower District, and even though the shops are wholesale-only, anyone can wander in–alongside the city’s flower dealers–to begin the day as they do: with a fragrant oxygen rush. 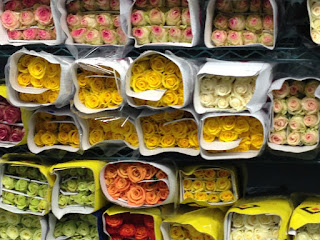 There’s the splat of a bucket of water hitting the sidewalk, the beeping of delivery trucks. Workers hoist bunches of pussy willows and branches into tubs on the sidewalks. Inside, the shops’ wall-racks explode with every conceivable color and type of flower, like psychedelic wallpaper. 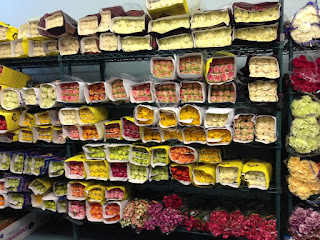 I step through the door of Empire Cut Flowers. As it’s Valentine’s Day, roses are front and center. I smile to think of the journeys these bouquets will take from here: into buckets outside bodegas, or wrapped in parchment paper and ribbon, carried on the B train or protruding from a messenger’s bag, presented over dinner at Daniel or on a stroll in Central Park. 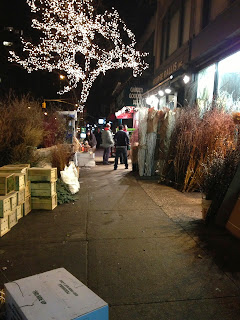 The moist green rush of perfume and cut stem hits me instantly—a sweet-and-sour, living smell. But a few steps in, the scent of roses and mingled buds is quickly overwhelmed by other smells: drip coffee (which is available for all in the back of many of the stores, alongside flats of doughnuts and sodas); cologne and body odor; the mustiness of wet cement floors and air conditioning; the astringency of eucalyptus. 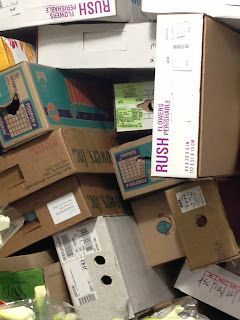 Salsa music plays, and morning news radio. A spirit of camaraderie prevails as the dealers greet many customers by name. There’s an undercurrent of instructions and consultations, in Spanish and English—“Twenty-five cream and two long-stems…” “Empire doesn’t have it, check…” “I got some nice delphinium, some daffodils, nice bunches, pink, red, orange…” but no one seems rushed. There’s the crush of empty cardboard boxes as the flowers gradually move off the shelves and out of the store. 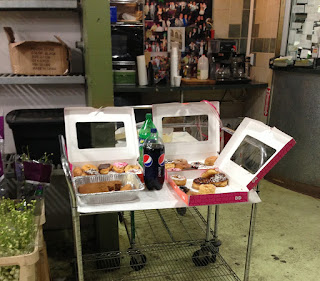 Daffodils rest supine, not yet bloomed, in a box. Lavender bundles exude a dry, heathery aroma from beneath a metal shelf. Vats of tulips burst from their wrappers beneath vases of early spring branches. Ranunculus buds rest their heads on a bed of shredded paper. Calla lilies—one of the few unbundled blooms—tempt passing noses with the flute of their single white petal. 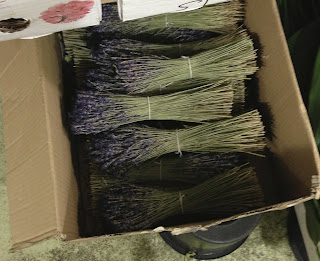 A streetlight glows where the sun will rise in an hour, and the asphalt is littered with crushed flower stems and petals, like a gym floor after a prom. A Dutch Flower Line truck disgorges boxes that landed at JFK just a few hours ago. 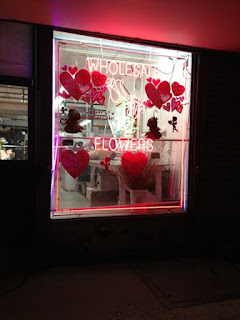 On my way home, I stop into a Duane Reade. Bouquets of a dozen roses are $17.99. I carry one to the register. “These roses are, like, eighteen dollars,” the clerk says, waggling the bouquet in one hand and raising an eyebrow. “I mean, yesterday they were only twelve dollars. Is it worth it?” he asks.

I decline: I am carrying a bouquet within me, and the day hasn’t even begun. 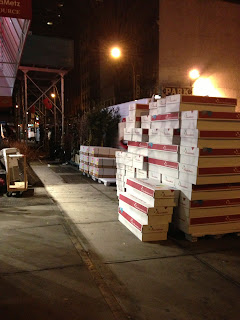