When I first heard about the Tortilla Triangle, a confluence of tortilla factories in Bushwick, Brooklyn, I imagined it would greet me with a cloud of masa-scented air, not unlike swimming into a warm spot in a lake. A recent article in Edible Brooklyn magazine described the area this way: “Stepping out of the Jefferson stop on the L train is an exercise in olfactory entrancement…. The warm minerality of cooked corn stretches the block, and you can almost float on the curls of aroma into the factory, dreaming of the brown-specked tortillas that await you.” 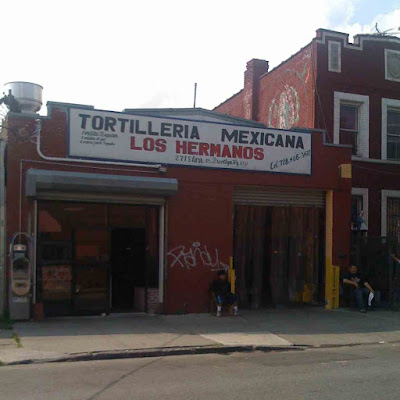 Nevertheless, I was enticed, and one weekday night at around 8 p.m., I surfaced from the aroma of the summer subway—hot tar, cinnamon-spicy disinfectant—onto the sidewalk of Starr Street, where I sniffed the air in anticipation. There was indeed a faint smell of toasted corn, dry and sweet, emanating from Tortilleria Mexicana los Hermanos, just a few paces down the block. Mexican music jangled from an open garage, where two men loitered next to a forklift. Adjacent was the makeshift café: a serving counter, a stack of laminated menus, a portrait of the Virgin Mary draped in a garland of fake flowers, and a few tables topped with miniature cacti where hipsters hunkered down over tortillas heaped with meat, beans, queso fresco, crema, shredded lettuce, and salsa.

Glass walls afforded a view of the production line at the back of the garage: a conveyor belt with a big orange bucket of dough at the center, manned by about five people and overseen by two enormous gilt-framed portraits of phantasmagoric seaside cabins. Two workers collected the hot tortillas as they spun out from between the metal rollers, another counted out a stack and plumped it against her forearm before handing it to a fourth worker, who slipped them into a plastic sack, pressed out the air, and twisted it closed. She handed the packet to another man, who stacked it in a cardboard box at the end of the line, which would presumably end up on the forklift I’d spotted near the entrance.

Wanting to experience the Bushwick tortilla in its purest form, I asked for two plain tortillas to go. The women behind the counter looked bewildered. “You mean two packages?” they said, dangling a still-steamy packet. No, just two plain tortillas, I repeated. The women furrowed their brows and mumbled among each other. I am sure I heard murmurs of “loco.” Finally they flipped two tortillas onto the grill and toasted them, then wrapped them in a sheet of tinfoil, waving away my offers of money with “Nada, nada.” 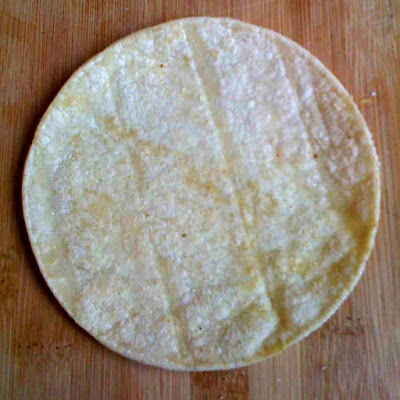 Outside the factory, standing by a fire hydrant, I unwrapped the foil and took a bite. The soft, chewy edges gave way to a sweet, soft middle pocked by air bubbles. The flavor was definitely bland, and would have been improved by some salt, not to mention cheese and salsa, but it was of a piece with the Tortilla Triangle itself, whose distinct but unobtrusive scent continued to waft around me in the evening air.