You could say Uliks Gryka was destined for the water. He was born in Albania, in a town at the confluence of two rivers. Like his namesake, Ulysses (which he also answers to), he has been on an odyssey that, last summer, led him to the shores of the Hudson River, in the shadow of the George Washington Bridge. There, he has been erecting a series of stone sculptures that have come to be known as the Sisyphus Stones. Now, Uliks says, “I’m bathing in the ocean.” 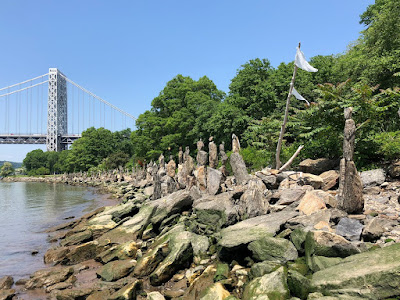 He never expected that his creation would one day be on Google Maps, that he would be written about in the New York Times, that what began as a deeply personal gesture would gain renown. On a recent afternoon, I find him sitting near the shore by his bike, which he uses to commute here from his home in Riverdale, sipping water and gazing out at the river. He is also watching for vandals. Since he began building the sculptures, in summer 2017, his work has been destroyed in its entirety twelve times. 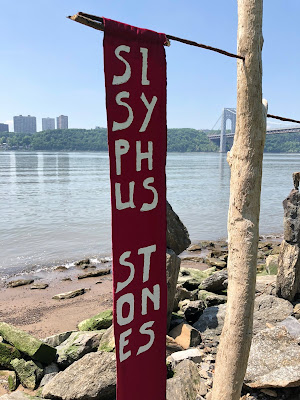 Uliks, who is thirty-three, is slim, with a neat beard and muscular limbs. Like the flecks of mica in his rocks, his quick smile catches the light and illuminates him. He wears a stone amulet that he fingers as he talks. 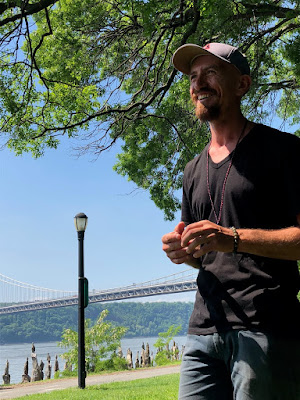 The origins of the Sisyphus Stones can be traced back to Uliks’s childhood, when he hung tree roots on the walls of his family’s home. Even then, he sensed that nature creates its own “art beyond the human.” When his family moved from Albania to Milan in the early 1990s, after the fall of communism, he began to compare these conceptions to the idols he discovered in Western European art. He eventually became attracted to the idea of a faceless, primordial form of the human idol. In 2007, Uliks won a green card in a lottery and moved from Milan to Riverdale. Soon after, a friend introduced him to Sufism, a mystical tradition rooted in Islam, whose adherents believe there is a divine presence in everything. 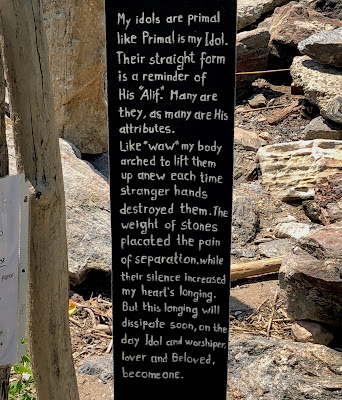 “The site chose me,” Uliks says of this narrow, rocky beach, due west of 171st Street, along the Hudson River Greenway. One night in summer 2017, as he was watching the sunset from this beach, he noticed that some of the stones around him seemed to have faces. That evening, he built thirteen sculptures. He has been coming here every day since, building his own “garden of creation” by following the energy of the rocks. Each day when he arrives, he tells me, “I bow my head in respect”—not in worship, but in reverence. 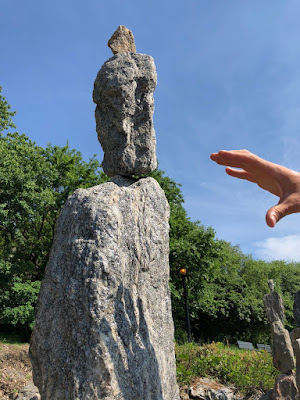 He has received no protest from the city parks department, and the overriding response from the community has been gratitude. Uliks (who does not have a day job; this project, he says, is “my sabbatical”) believes stones found by the water are, “in a way, a microcosm of the universe: they contain all the elements”—earth, wind, water, and the fire from the planet’s core. Here, they also serve the city waterways by trapping garbage; he incorporates some of these gatherings into the pieces. 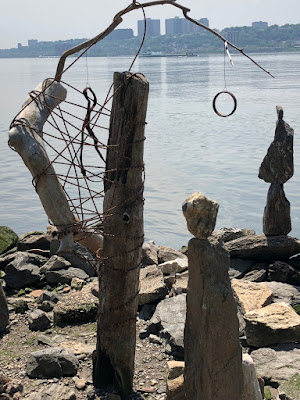 Uliks appreciates the towers’ fragility in contrast to the impermeability of the city. He has no formal training in sculpture, and he does not use wire or adhesive but relies on the stones’ natural shapes to hold them in place: “Ephemerality is much more important than balance,” he says. Waves, wind, birds, and the tide sometimes knock them over. These actions do not bother him. But his face darkens when he describes the human vandals. He says he feels jealous that his creations—which he considers akin to children—are giving something of themselves to someone else through an intention apart from his own. 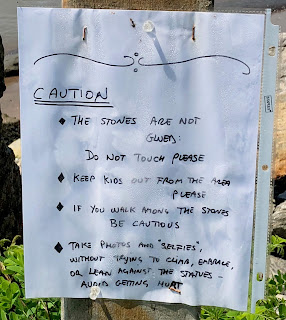 He gathers all the rocks from this shoreline, keeping the large stone bases where he finds them and carrying over the smaller rocks. He prefers not to have big gaps between them; the placement is “a dance where each one is holding each other’s hands.” 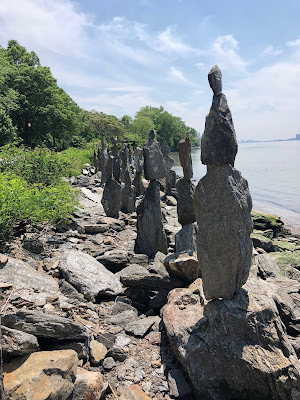 When I ask if he has a favorite, he points to this one, which he says reminds him of a monk with his hands clasped, or a mother cradling a child. 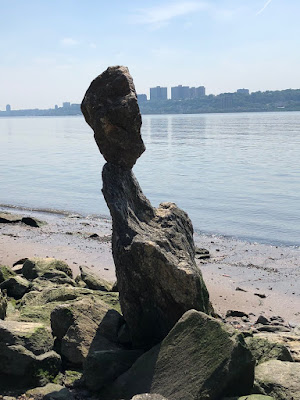 In fact, he has seen mothers and children walking among the Sisyphus Stones and carrying on the tradition by making their own cairns nearby. 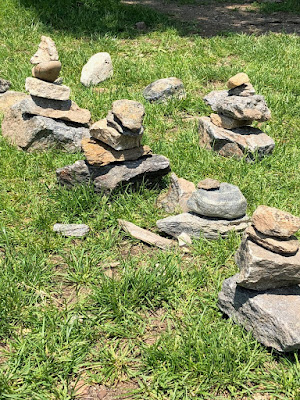 As we are chatting, a guy with a boom box mounted on his bike pedals past, music thumping, and hurls a stick in the direction of the Sisyphus Stones. It narrowly misses one sculpture and falls to the beach. Had he been aiming at the sculptures or at the river? It’s impossible to know. But Uliks is philosophical about his unexpected struggle with creation and destruction. Sisyphus might seem like a loser, he tells me, but he wins each time in his perseverance: constant defeat is constant winning. As Uliks likes to say, “Do not become everybody’s mirror.”


To visit the Sisyphus Stones, take the 1 train to 157th Street, walk one block north to 158th Street, and turn left. Follow 158th all the way to the end and take the staircase down beneath the Henry Hudson Parkway. At the bottom of the stairs, turn right and walk north along the Hudson River Greenway path for about a mile. The installation is visible from the path on the left, not too far after the softball fields.