Halloween is now a few weeks past, and across the city discarded jack-o’-lanterns slump on brownstone stoops, wilt in windows, and crumple beside compost bins. 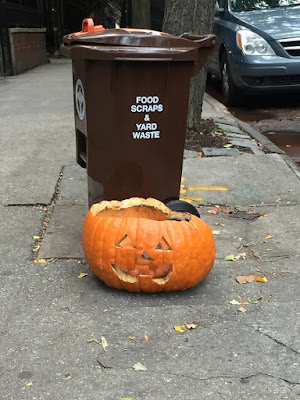 Not so, however, on the corner of Kane Street and Strong Place in Cobble Hill, where since 1998 a sharp-spiked iron fence has evolved into a memorial of sorts for neighborhood jack-o’-lanterns. From October 31 through Christmas, pumpkins are granted a place of honor—or humiliation, depending on your point of view: over the two months, the impaled pumpkins decay until they are nothing but scraps of gourd-flesh clinging to the fence posts and splattered on the sidewalk below. 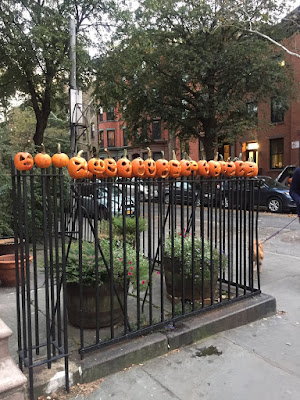 Starting at dusk on Halloween, local trick-or-treaters can drop off a carved pumpkin for impalement on one of the fence’s 274 spikes. The only requirement is that the pumpkins—which occasionally make room for a guest appearance by a butternut squash—be oblong, measure about five inches in diameter, and have stems intact. 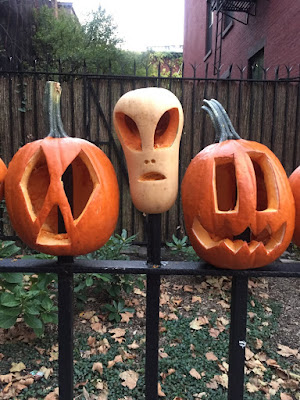 “The Brooklyn Impalement,” known formally as The Halloween Impalements: The Toll of Time, is the creation of artist Jane Greengold, who once lived in the stately redbrick house behind the fence. The iron spikes surrounding her home seemed to her an irresistible site for head impalements—and pumpkin heads seemed like a natural stand-in. For the first few years, she and a few helpers carved eighty to one hundred pumpkins for the installation, but starting in 2012 she began inviting her neighbors to contribute. 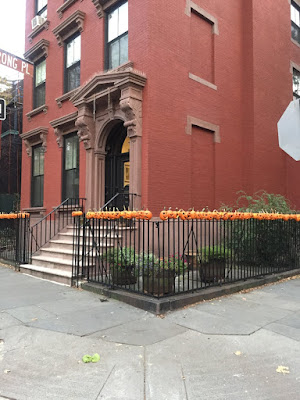 Each year, more spikes on the fence were crowned with pumpkins. Then Greengold moved, and the tradition was suspended for a few years, but due to popular demand, and with the permission of the fence’s current owner, she resumed the impalement this year. 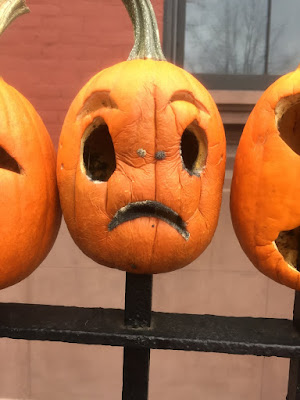 Though the pumpkins remain perky for the first week, especially in crisp weather, by week two they have begun to look concerned. Once-bright eyes glower; mouths drool seeds and droop as if they’ve lost their dentures; teeth become crusted with a fuzzy gray plaque; taut orange skin loses its luster. 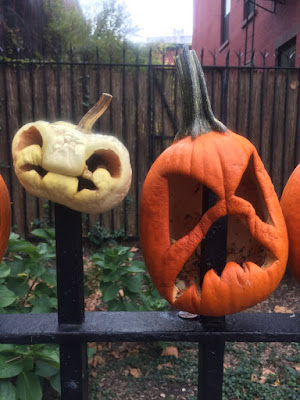 And therein lies the crux of the installation, at least as far as its creator is concerned: the fading of beauty over time. The installation not only draws out the macabre Halloween spirit for an extra couple of months but also reminds frequent passersby of their own mortality. By week three, existential plight has set in, and the pumpkin heads begin to look like a line of souls waiting at the gates of hell. 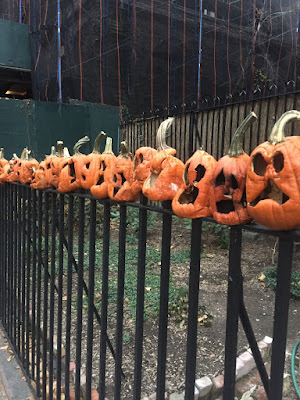 The pumpkins no longer greet their spectators with coy winks and sinister teeth. Their flamboyant game of fright has suddenly turned back on itself in a cruel twist of fate. Now they slump toward each other, their eyes hollow, betrayed by the passage of time. 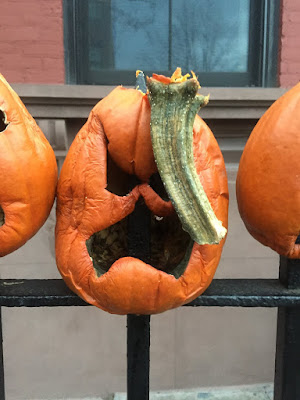 Somehow, though, as their Halloween glory fades, the gourds’ expressions become increasingly human. Much as we might scan a row of seated commuters in a rush-hour subway, looking for a kindred spirit, we may recognize our own spirit gazing back at us. 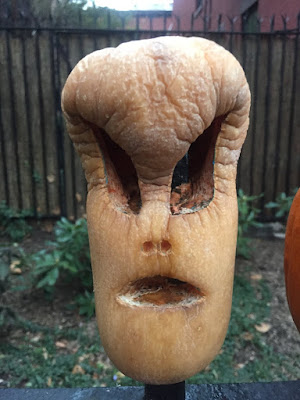 With a little grace, maybe we can manage not to despair but to raise our hats, like this fellow has, in recognition, and perhaps to give a little wink, as we might to any stranger in whom we see a little bit of ourselves, even if just in passing. 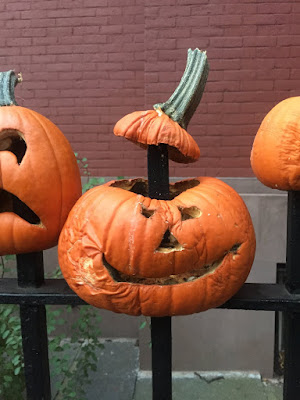