SIGHT: The most beautiful alley in New York City

If you’re walking east on Seventeenth Street approaching Union Square, you might not notice a pair of iron gates on the south side of the street, sandwiched between Rainbow Falafel and Starbucks. And you might not decide to glance furtively to both sides and then duck through the gates (which are almost always open). But if you do, you’ll be rewarded with what is arguably the city’s most beautiful alley—particularly so on a rainy day. 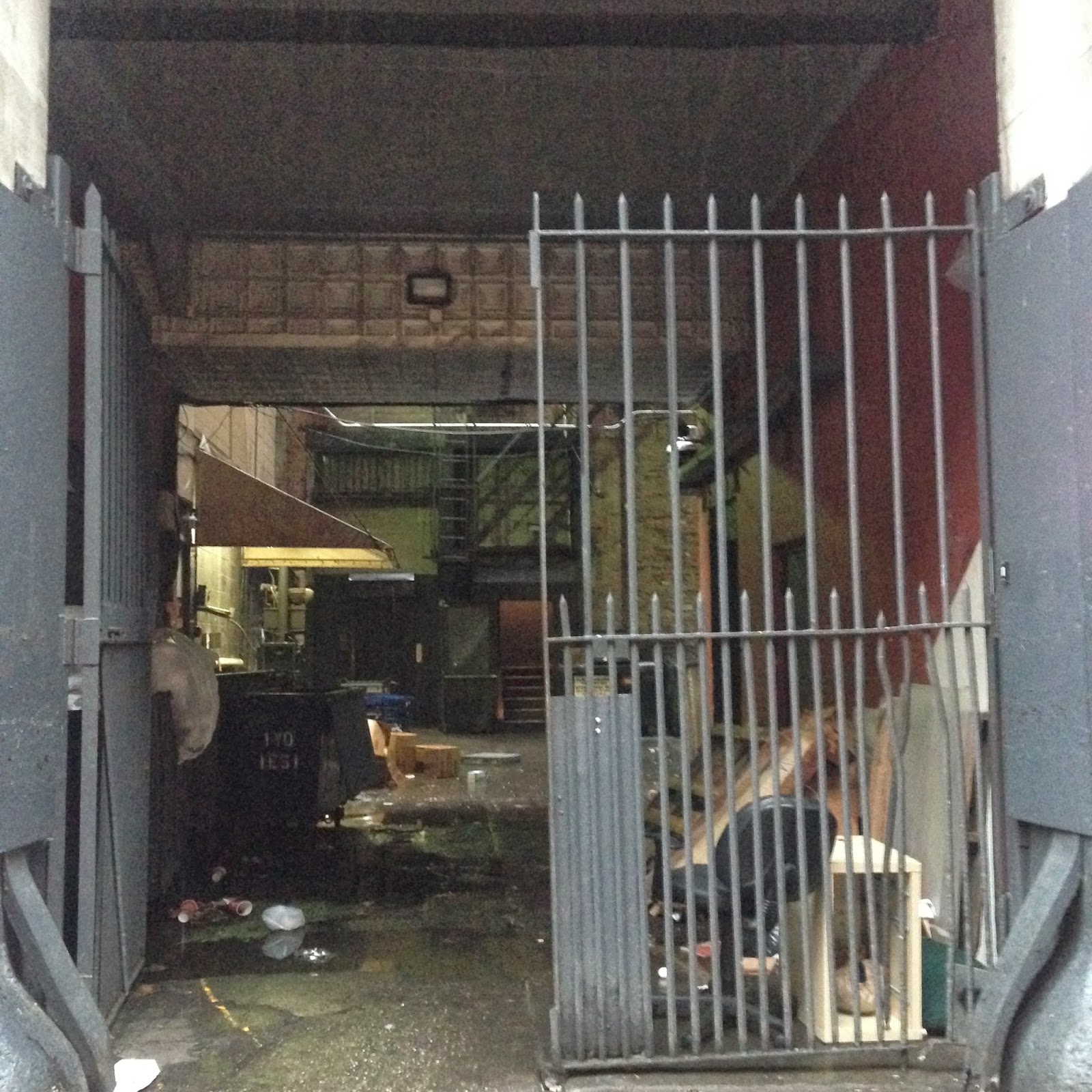 What’s more, you’ll have the rare experience, in New York, of becoming invisible to passersby while still being able to observe them. “Alley ceiling” might seem like an oxymoron, but this alley has one: pressed-tin, in two patterns, accented by red and silver paint. 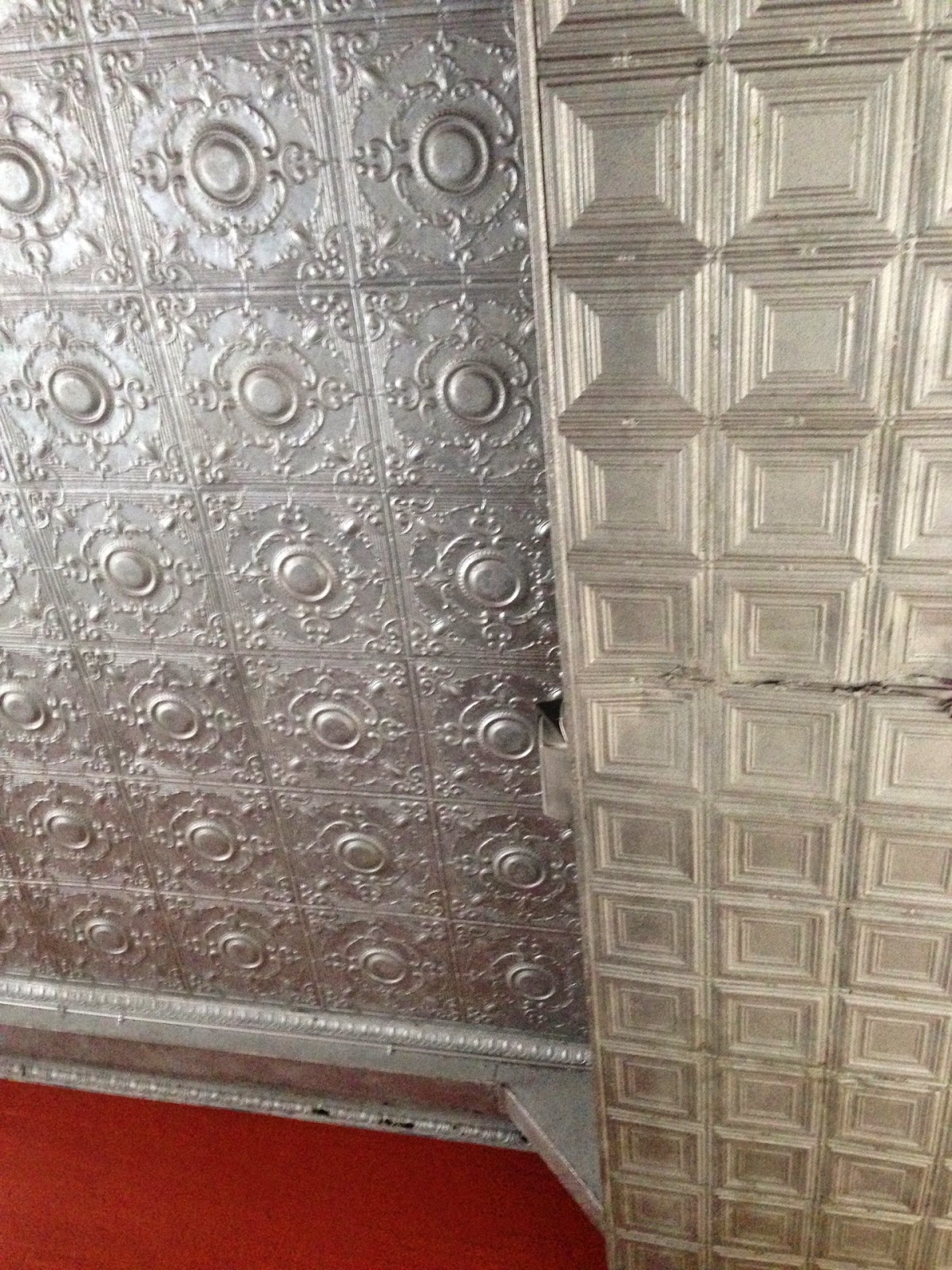 The air hums with gusts from ventilation fans. It smells like kitchen grease. Metal pipes and airshafts soar up the backs of the buildings, connected to an infrastructure of AC units, switches, and wires. Walk deeper into the alley and it reveals a hidden corner, where another vista opens up: tiered fire escapes and a plump water tower, more air shafts and pipes. 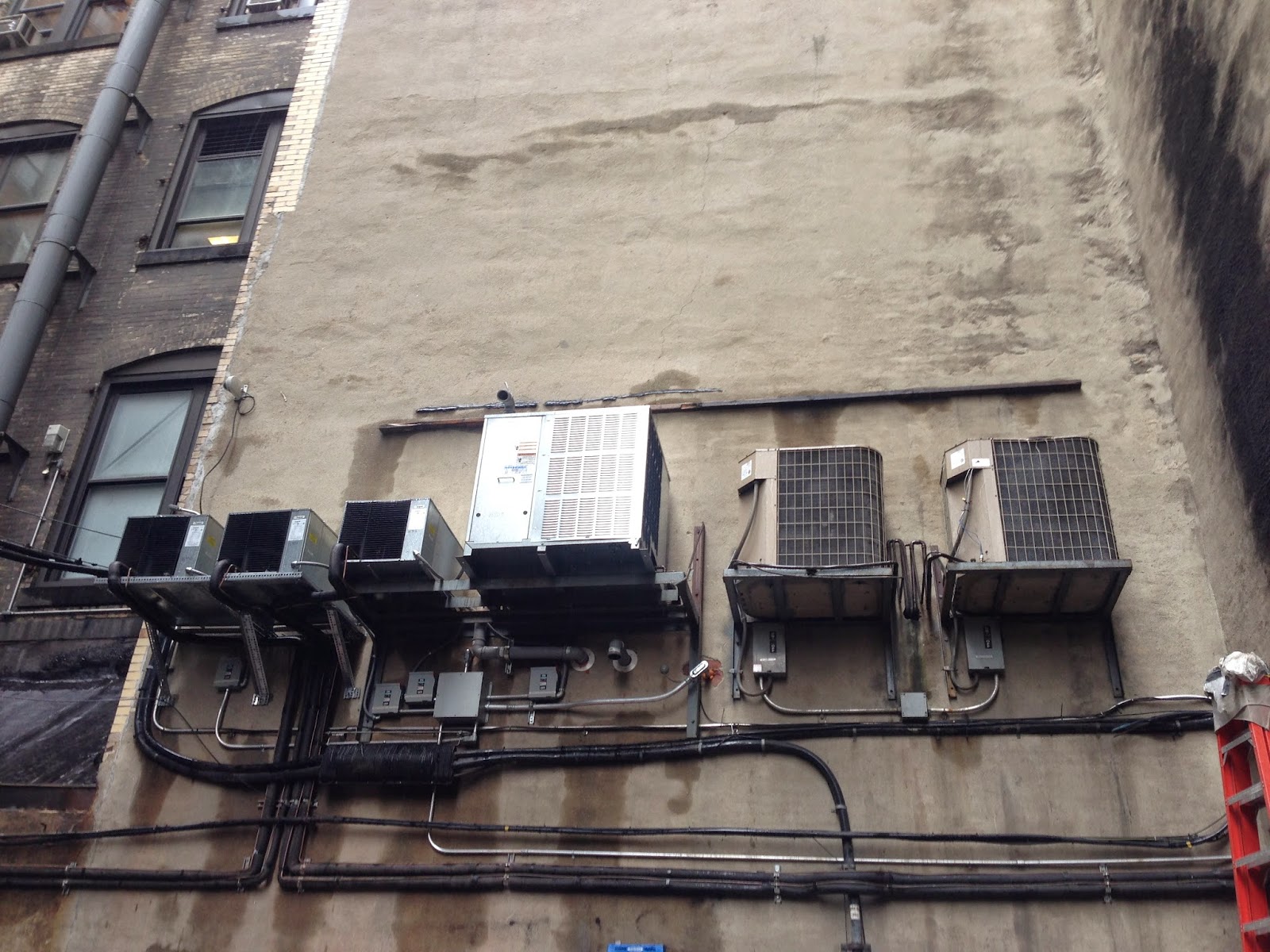 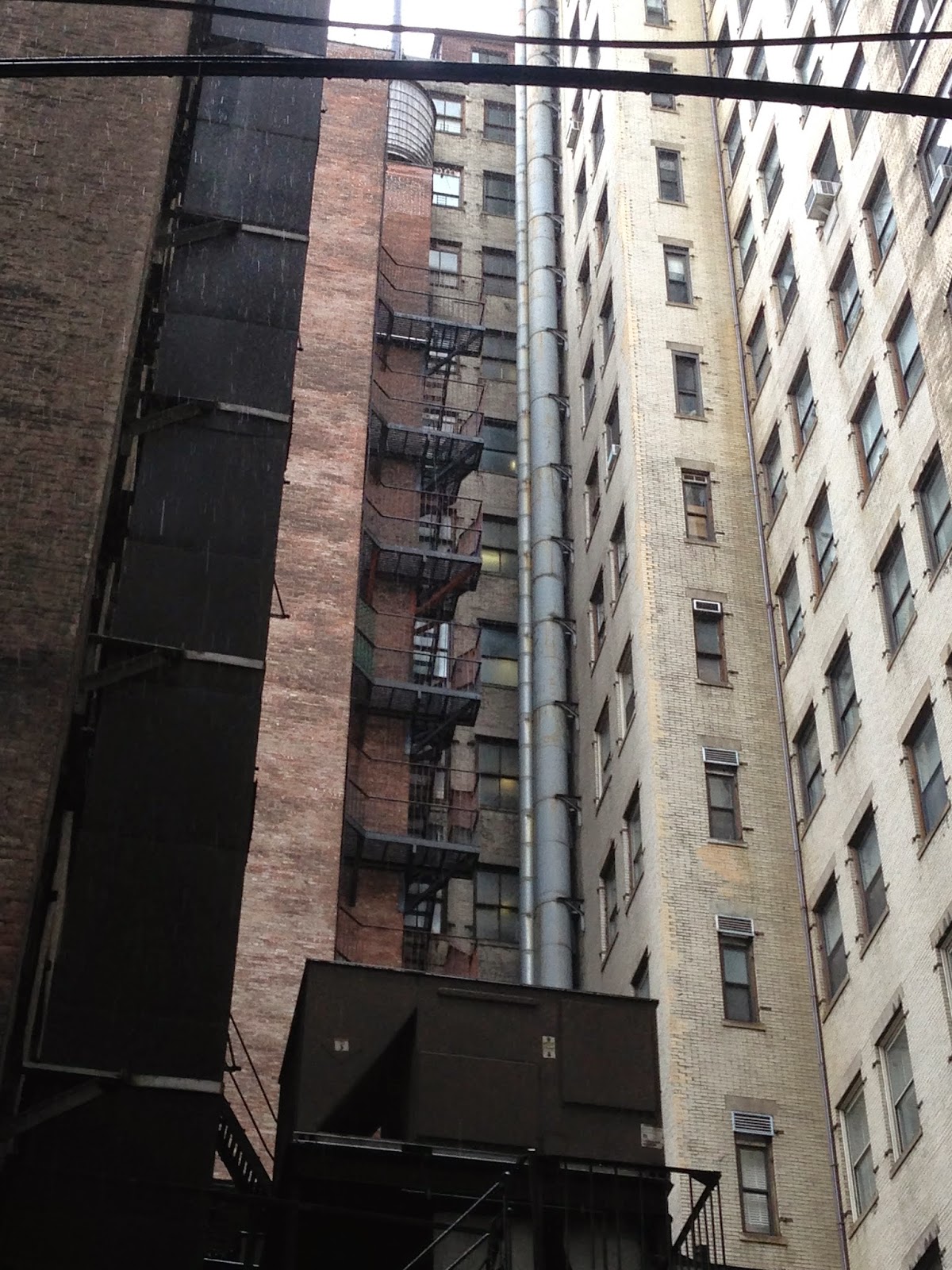 The Dumpsters, though, are the stars of any alley, contributing bursts of color to the gloom. Their stenciled name tags, representing some of the city’s largest private waste contractors, seem to impart a sense of motion and optimism to the stagnant air: Elite, Action, Mr. T, Five Star. 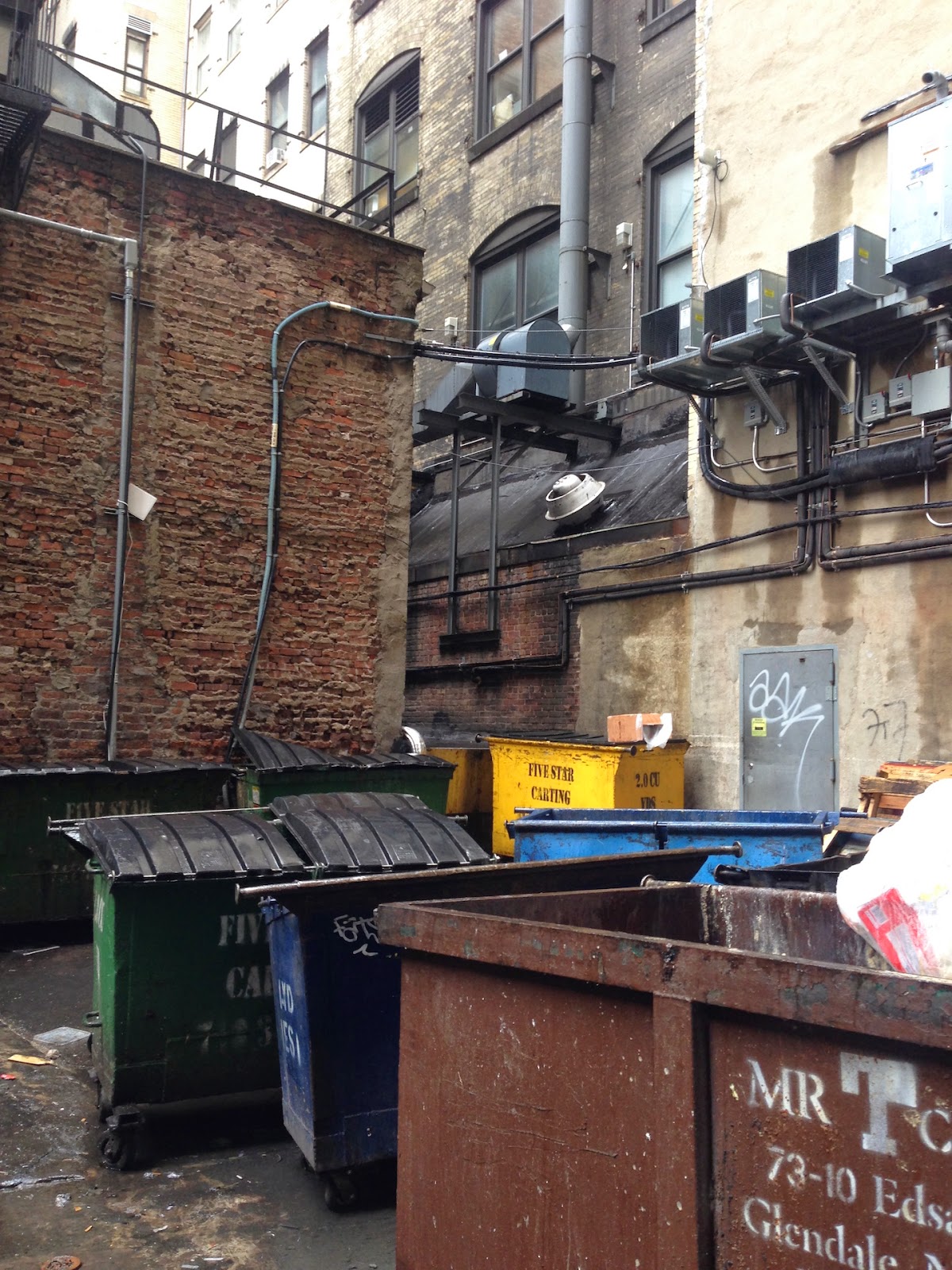 An especially surly Dumpster is tasked only with kitchen grease, its spattered maw yawning open. Its contents get carted off to New Jersey by one “J&R Rendering.” 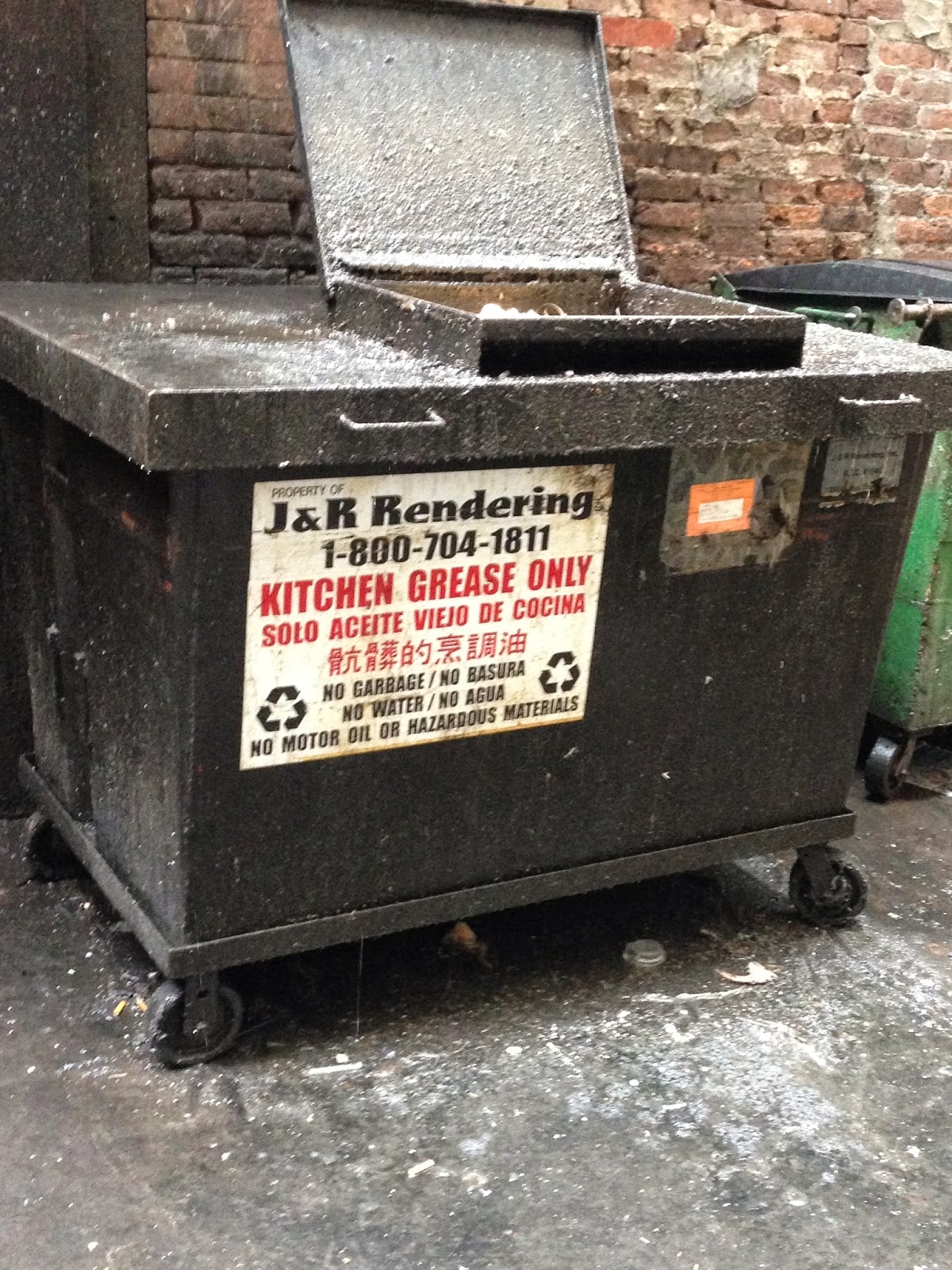 The grease Dumpster’s partner in crime is most certainly the baling press, another alley essential, used to squash cardboard boxes into dense cubes for recycling. Look to the right and you’ll see a battalion of ladders propped up against the wall. Like the Dumpsters, their colors and order belie their sinister surroundings. Who uses all these ladders? Where might one climb on them? 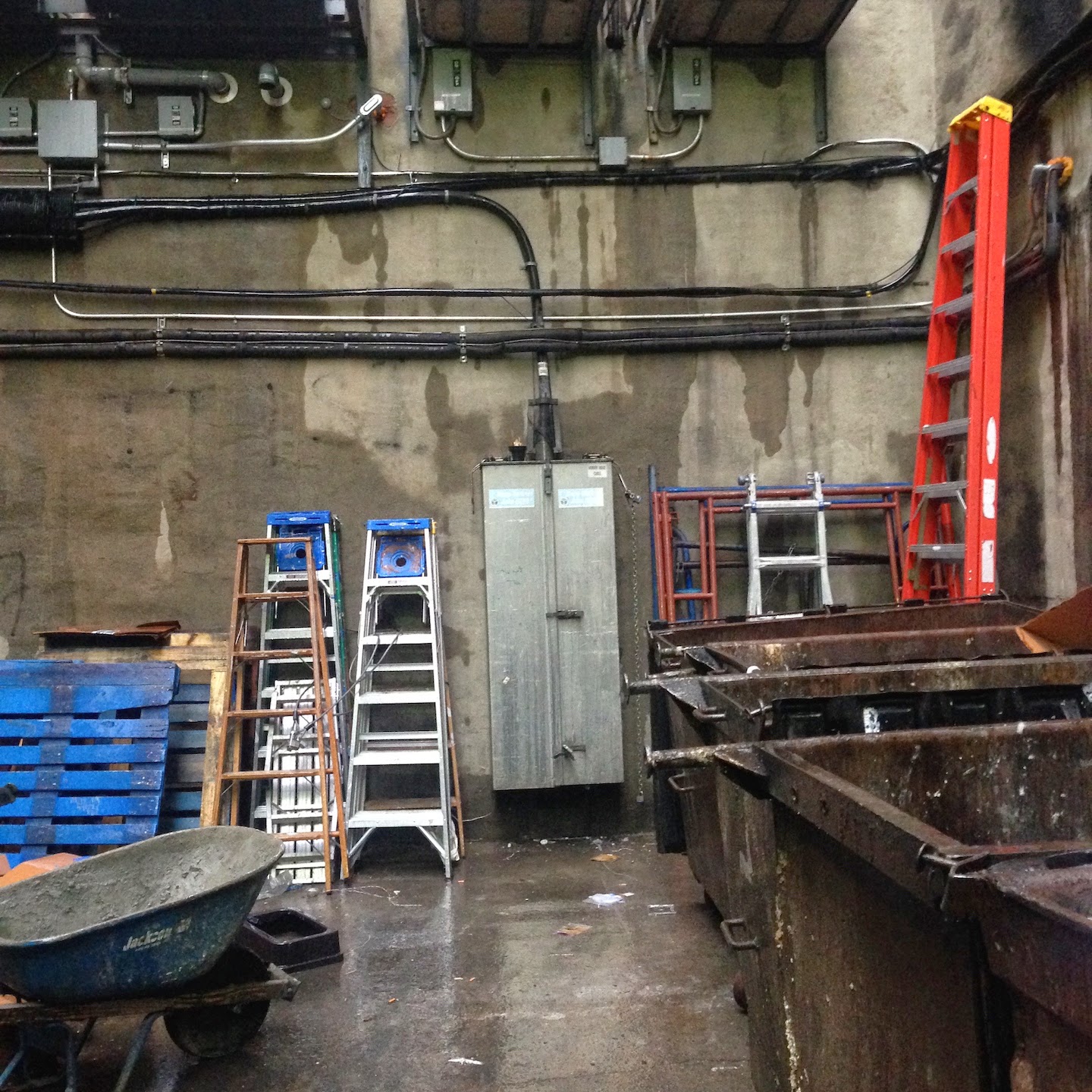 On the day I visited, the litter in the alley consisted of cascades of cardboard boxes, an exploded plastic deli clamshell and a Stacy’s pita chips bag, a broken hard drive, a sodden page-turner titled Anya’s Echoes (later research revealed it is a Holocaust story), and a plastic bucket of black grease with a rubber glove sunken in it. 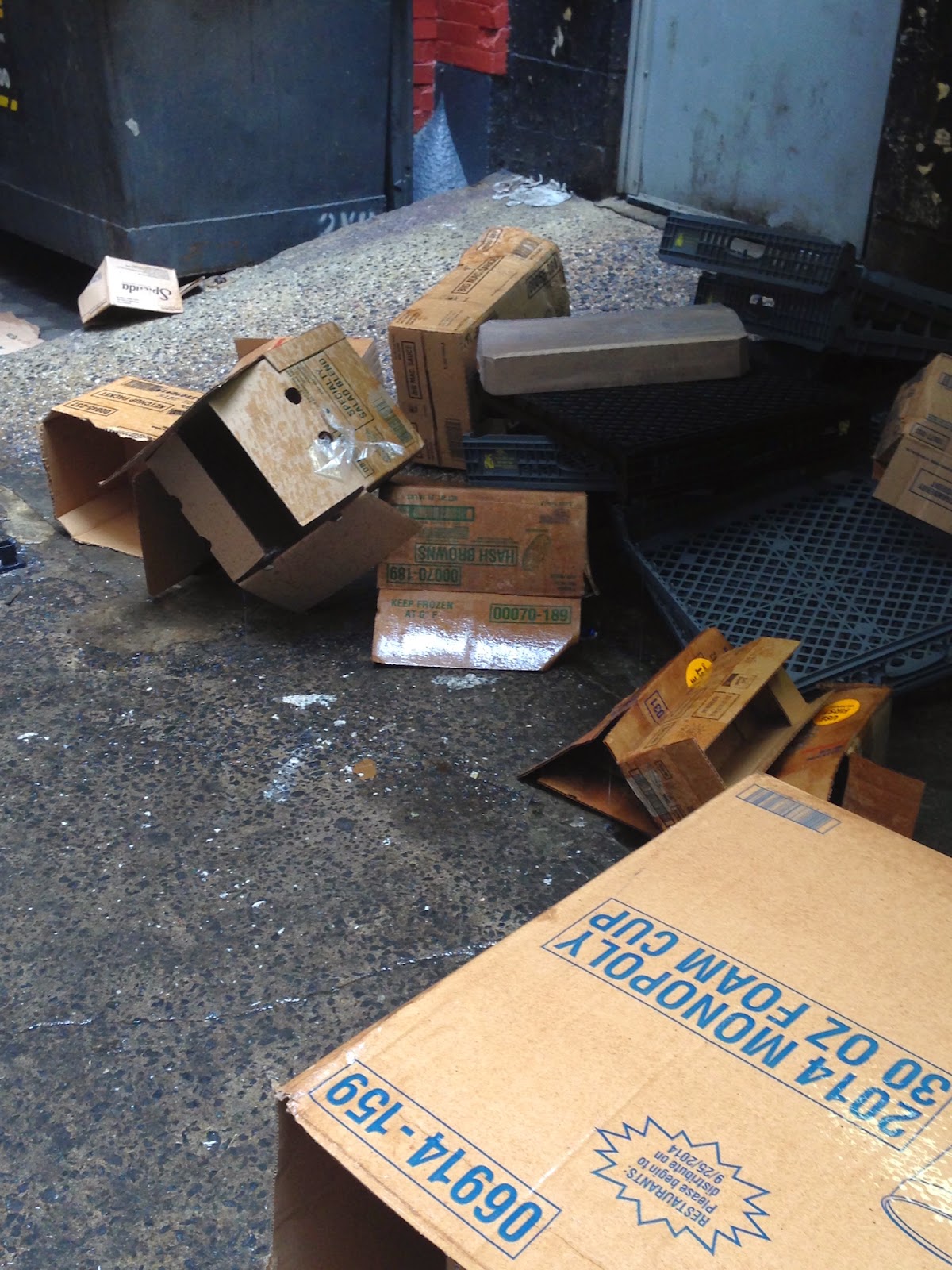 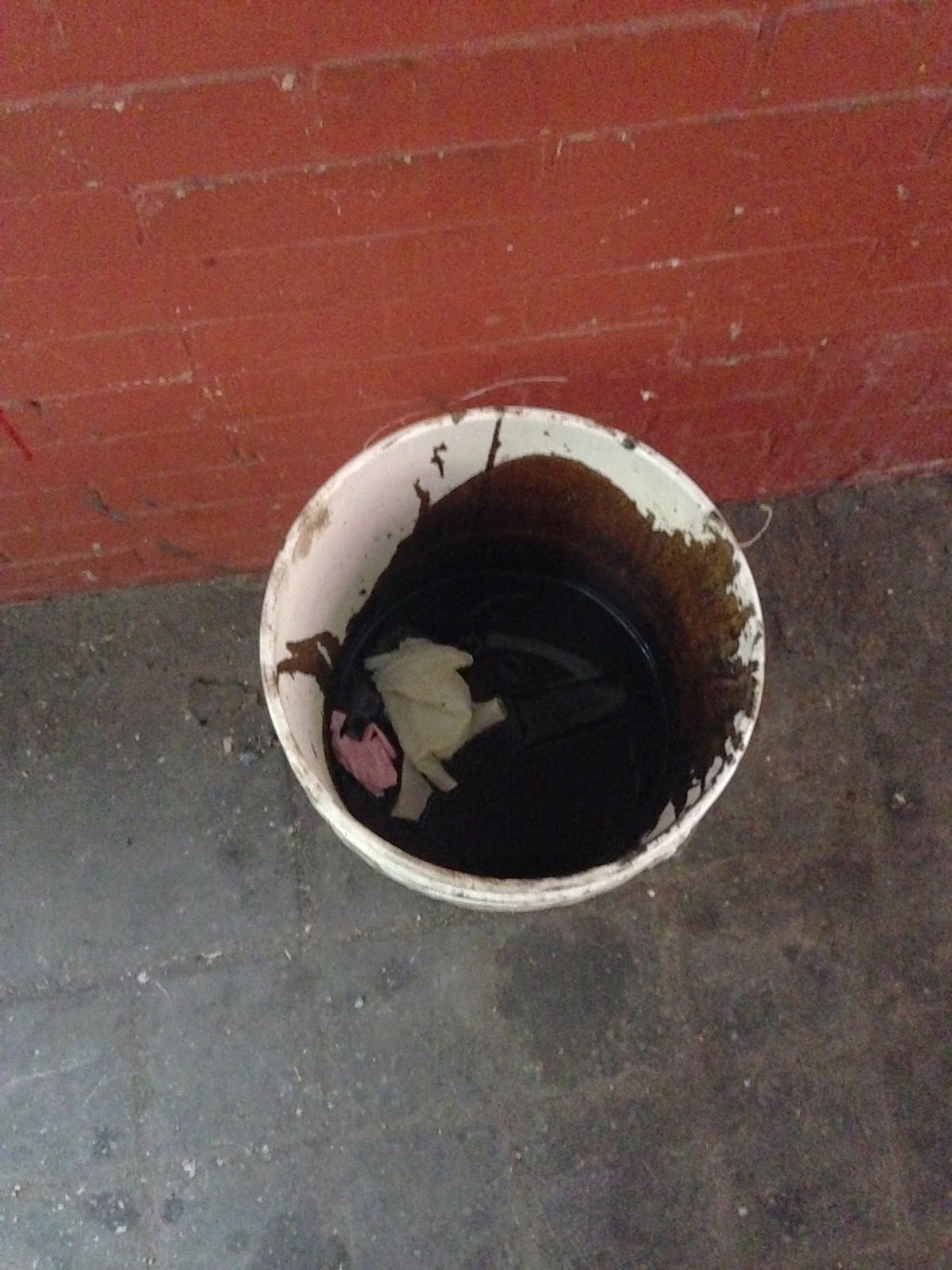 As I was pondering the bucket of grease and watching oil rainbows skid across puddles in the slight breeze, the door of the adjacent freight elevator opened and a man in coveralls emerged carrying a toolbox. With a nod to me, he slipped through the iron gates into the city. A Starbucks worker in a green apron flounced a trash bag into a Dumpster from the coffee shop’s rear stoop. It sailed through the air and landed with a moist smack. A woman passing by on Seventeenth Street, a dachshund tucked under her arm, followed up with a telltale blue New York Times delivery bag. A bare light bulb swung above the door in the breeze. 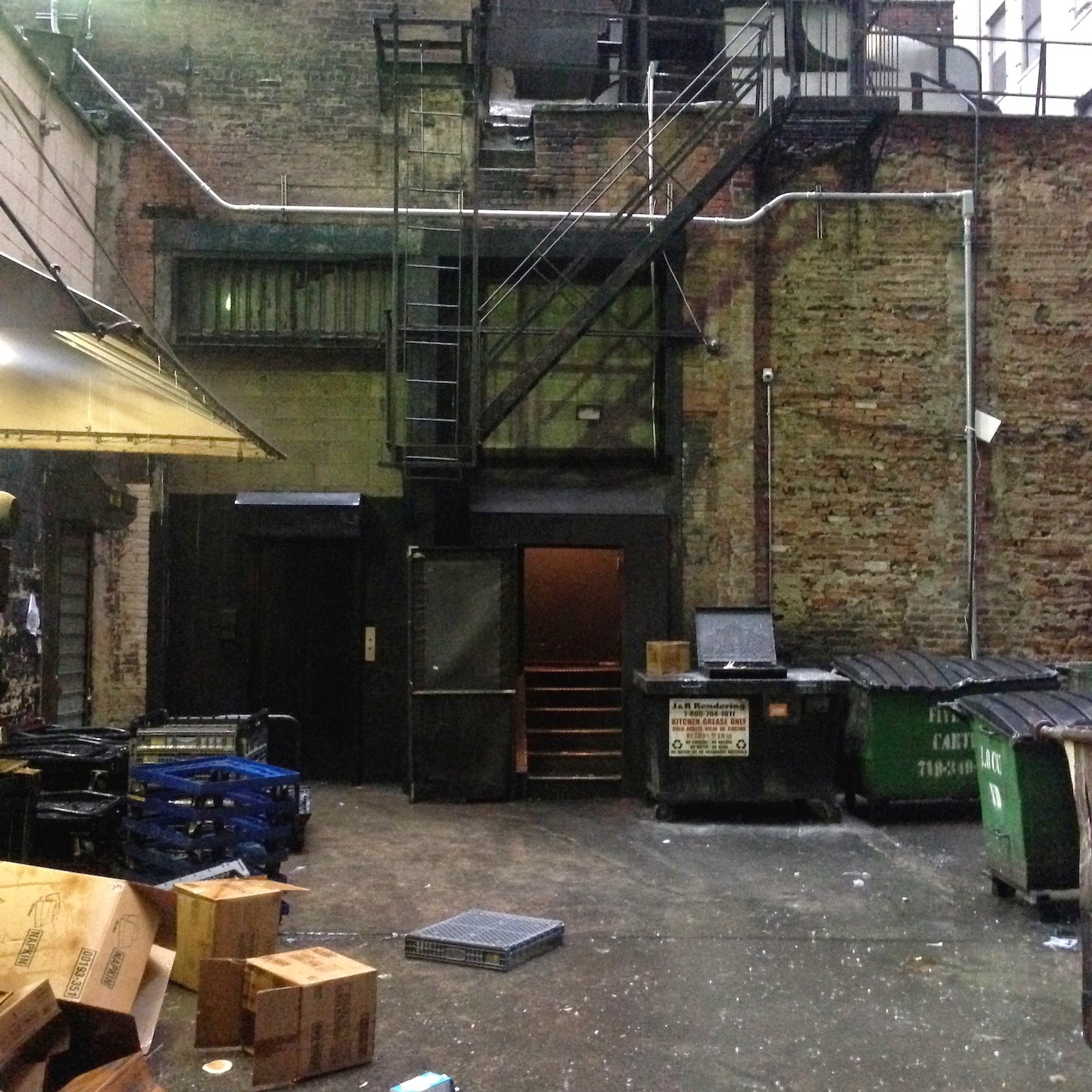