Before I made the trek all the way to the southeast shore of Staten Island, I had verified the rumors I’d heard of Doug Schwartz’s rock-sculpture garden on the beach of Mount Loretto Unique Area (as the nature preserve is formally called). But once there, on a blistering hot July afternoon, I tried to imagine what his creation would look like to someone who had no idea it was there: A modern-day Stonehenge? The meeting grounds of a demonic coven? The work of
a marooned sailor? According to a fairly recent PBS documentary short, Schwartz has been building a pyramid a day for no other reason than that he wants to–as a temporary gesture to art and nature and the emphemeral. 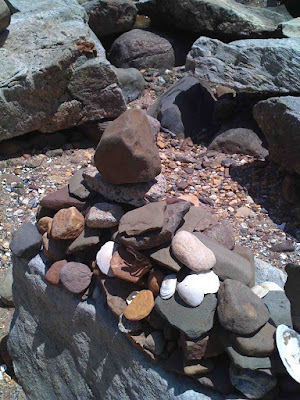 The beach overlooks Raritan Bay and, in the distance, the New Jersey shore. It’s not the first place I would choose for a casual stroll. As I followed a park ranger’s instructions and headed to the right out of the pier parking lot, I saw no sign of Schwartz’s sculptures, only a stretch of litter-strewn sand and a gangly lighthouse on a steel trestle. But after tiptoeing across a tidal stream burbling with yellow foam, I rounded a bend and there it was: a forest of stone cairns, of the sort hikers use to mark a path or mountain peak, set along a rock-edged path beneath a leafy bluff, overlooking the ocean. 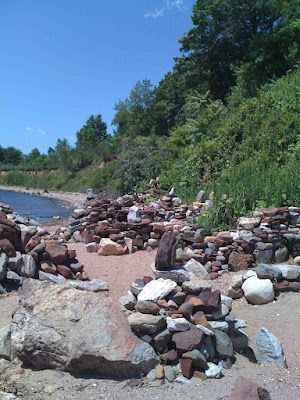 Perhaps it was because I was the only visitor, but there was something enchanted about this place. The careful balance of the rocks beneath the rust-colored cliff, the smell of fish and sea salt, the lap of the tide and caw of seagulls, a string of tattered and sun-bleached prayer flags. Shells of extinguished tea lights beneath a few of the cairns brought to mind what the garden would look like at night, the sun-baked rocks cooled, the flames and shadows muting the colors: rust, ochre, slate; marbled, freckled, jagged, round. A few cairns were buttressed with crumpled beer cans or sticks or clamshells, others tangled with fishing line or feathers, but most were freestanding. One mandala of small rocks and bright blue mussel shells set flat into the beach looked like it had been rearranged by the tide. Many long benches made of washed up boards weighted with stones awaited guests. 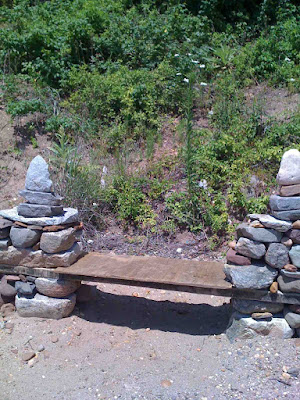 On my return walk, I found the tide had come in, and the stream was now uncrossable. I had to duck through the underbrush to reach a gravel spit. It hadn’t occurred to me, when planning my visit, that the path might be as ephemeral as the creations themselves, subject to winds, vandalism, tides—and interpretation. 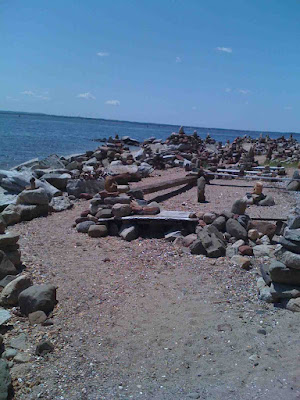