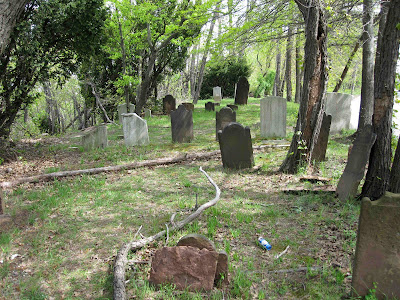 On a hazy day in early spring, I made my way down a shabby stretch of Arthur Kill Road on the western shore of Staten Island, past Big Nose Kate’s Saloon, Guy’s Tire Buys, and Crazy Goat Feeds pet-food store. From the gravel shoulder where I parked, a flight of stone steps led up to the Blazing Star Burial Ground, a hillside knoll where lilacs droop over gravestones dating back to the 1700s. Not half a mile in the distance lurked the bald green pate of Fresh Kills landfill. And just ahead, through a sweep of tall grass, was what I had come to visit: the rusted hulks of ancient ships that have, like Blazing Star’s occupants and the trash of the five boroughs, also come to Rossville for their final rest: at Staten Island’s boat graveyard, otherwise known as Donjon Marine Company salvage yard. 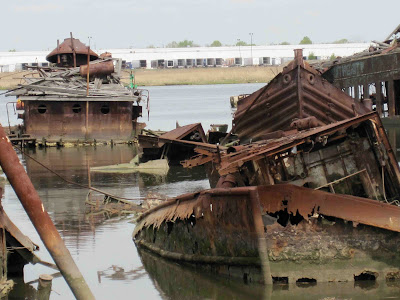 After donning tall rubber boots, I pushed my way through the grasses, teetering across landfill sludge—Santa hats, flyswatters, shampoo bottles—on ancient ship beams studded with nine-inch rusty nails. The air smelled like sulfur and stagnant mud. In the distance, spring birds twittered over the rush of the West Shore Expressway. In the rippling water, Canadian geese drifted between empty shells of ships sunk in the mud. Their hulls canted to port and starboard; portholes pointed toward the sky. Splintered wooden wheelhouses toppled onto decks, where crusty cleats held limp bowlines strewn with algae. In some places the hulls were paper thin, almost lacy, and the metal curled at the edges; one could imagine it rustling and tinkling in the wind. Gears, pulleys, and capstans clung to the decks of the ferryboats, tugboats, barges, and fishing boats like desperate sailors on a stormy sea, only the waters here were so stagnant that I spotted a few mussel colonies growing in the shallows. 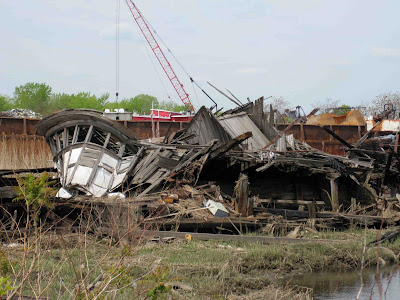 For a different view, I drove a few yards down the road to the official entrance of the salvage yard and managed to snap a few pictures. As I was admiring close up the sunset patterns the rust made on the hulls, a pickup truck ground up beside me and two guys hopped out. “Hey Mike, see that? A brass valve, right on the front!” They stood beside me for a moment, assessing the wreckage, before we were both chased off by a firm if somewhat lackadaisical guard. Apparently that’s part of the reason the ships are here: so they can continue to serve the public, if not by ferrying goods and people, by offering a brass fitting or an old tiller wheel. 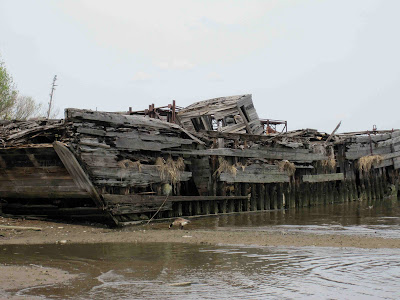 Just before I left, I saw a rubber raft with an outboard motor puttering among the ships, and then a shiny red tugboat streamed past, its fresh white wake splashing up against the rusted shells of its ancestors. 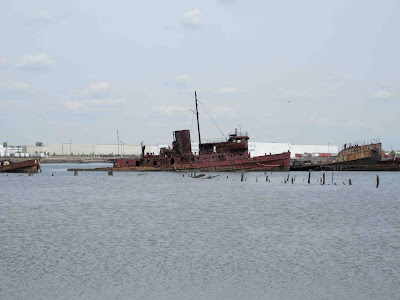