It was one of those startlingly bright winter days when metal gleams and everything in the city seems hard and sharp: the perfect day for plane-viewing. 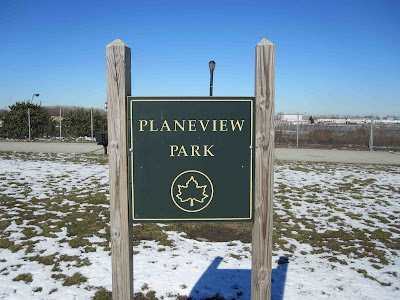 Plane View Park, in Astoria, overlooks the takeoff runway at LaGuardia Airport. It consists of a curved path of cracked asphalt, a semicircle of parched grass, and a few benches affording a view of the airport through a chain-link fence; next door is Vaughn College of Aeronautics and Technology, and close by is the airport control tower. The air is heady with the smell of jet fuel, and the BQE roars past between the park and the tarmac.

Looming over the highway, through the diamonds of the chain-link fence, I saw the gleaming hulks of American planes queuing up for takeoff, their tailfins lurking above the sound-barrier wall like a line of hungry sharks. One Delta 747 inched forward, then rounded the bend at the end of the runway, near a red and white striped wall. The heat waves from its exhaust pipes blurred the low-slung Queens skyline in the distance. It waited again, wings spread, and a few moments later came the roar as the wheels spun, burning rubber, and it was off—into the startling blue day, with a high-pitched whine. 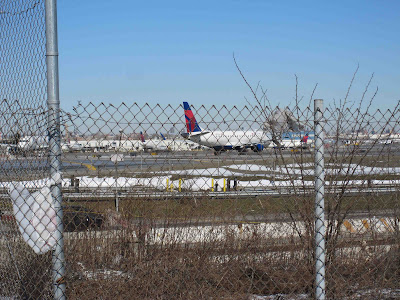 The planes didn’t seem to be moving as fast as it feels when you are a passenger. In fact, from the vantage of Plane View Park, it seemed improbable that the plane would actually make it off the ground. As I stood in the frostbitten snow at the edge of the park, I thought of the passengers encased in these planes and that feeling of no-going-back that you get as your plane taxis up the runway. There they all were, just meters before me, buckled into their seats by their scratched plastic windows, screens glowing in the seatbacks before them, perhaps pretending to relax or read, but really thinking about the impending rise into the air, the lurch, the sucking back into the seat, the impossible speed, the captive feeling of fatalism—and then the sudden silence as the wheels leave the ground and there is just tilted blue sky: a violent departure for a more peaceful place. 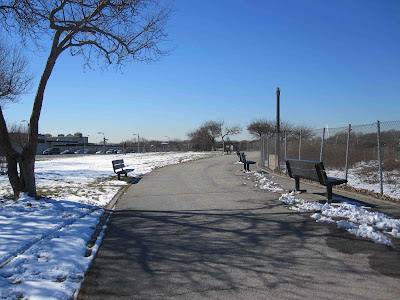 As I walked back to my car, a flock of winter birds swooped over my head and scattered into the day.

N.B.: I later realized that a much better “plane view park” is just feet from the park proper, parked alongside the chain-link fence on Ditmars Boulevard, where the view of the runway is closer and less obstructed. Apparently, the livery cabs knew this already, as I took my place in the queue of napping drivers.