“Papa, what’s staring?” asked the little girl perched on her father’s shoulders, looking out over the crowd of heads and cameras beneath her. Apparently she had learned the single rule of Manhattanhenge, the semiannual alignment of the setting sun with the east–west grid of Manhattan’s streets: don’t stare at the sun. 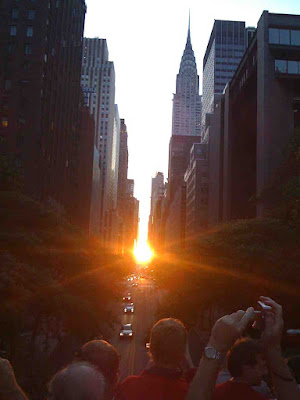 I had heard that the ideal spot for viewing Manhattanhenge was Tudor City Place, a tiny thoroughfare between First and Second avenues whose virtually traffic-free overpass directly above Forty-second Street offers an unobstructed view west across the island. On this clear, breezy Sunday evening, May 31, about fifty people had gathered on the bridge, with stepstools and cameras and tripods, to capture the spectacle. At 8:17 p.m., the full sun was due to slip into position, centered right above Forty-second Street, suspended for one perfect minute before sliding below the horizon.

“Staring is when you look at one thing for a really long time. Here, let’s look the other way for a minute,” the girl’s father said, turning them around to face the East River, where a lavender sky, wisped with clouds and dotted by a lone helicopter, offered a peaceful counterpart to the blazing spectacle to the west. At 8:03 p.m., the sun was still slightly to the south, or left edge, of the grid, but as the minutes passed, it slid into full, blinding view, limning the edges of buildings and casting the Hyatt hotel flag, a fire escape, and even the Chrysler Building’s fierce plumage into shadow.

Since I had not thought to bring a stepstool, I struggled to find hole in the crowd through which to see the sun, and finally located a relatively consistent passageway between one man’s ear and another’s jaw (the setting sun actually illuminated his beard stubble quite beautifully). The spectators appeared to be mostly native New Yorkers, families, couples, and two lackadaisical policemen monitoring the scene and snapping shots with their iPhones. At the peak moment, an elderly Eastern European woman let me stand on her footstool, steadying my back with her palm. At last above the crowd, I had a clear view across Manhattan. The sun’s rays radiated perfectly toward me, like an open hand, creating a golden corridor above the hush of taxicabs and buses trundling over the gentle humps of Forty-Second Street. A few old-timers in the crowd began comparing this year’s event to those in the past. (“Remember back in 2004, when it was a little cloudy? Oh, that was a good one, that was a real beauty.”)

A minute later, the sun’s orb disappeared, leaving only a peachy glow on the horizon. The crowd dispersed. As I descended into the sunset street, I felt a sense of peace and camaraderie unusual to this part of town. One woman crossing the street paused in the crosswalk, halting several lanes of traffic to snap a photo, before dashing into McFadden’s Saloon. Another couple was taken by surprise by the unusual glow to the east. “Oh! There’s the sun!” one said, pointing. I turned to look at them. “Oh! Not you,” they said, laughing. “The sun! The sun!” 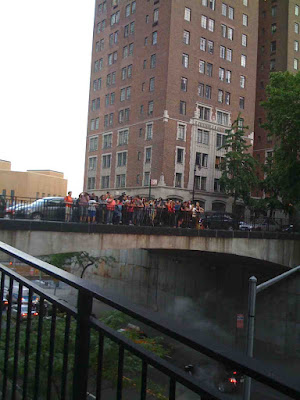 Manhattanhenge will happen again on Saturday, July 11 (the half sun on the horizon), and Sunday, July 12 (the full sun), at 8:25 p.m.
For more information, see http://tinyurl.com/qetuwy.