It might not have been the coldest January day for a swim in the Atlantic Ocean, but though temperatures hovered in the mid-forties the wind was brisk, and the water, reportedly, was about ten degrees colder: around thirty-five degrees. On a recent Sunday in southern Brooklyn, members of the hundred-year-old Coney Island Polar Bear Club begin to file through a door in the Education Center of the New York Aquarium, just off the boardwalk. In the high season it appears to be a lifeguards’ locker room, but a placard affixed to the chain-link fence proclaims it the winter headquarters of the Polar Bears. 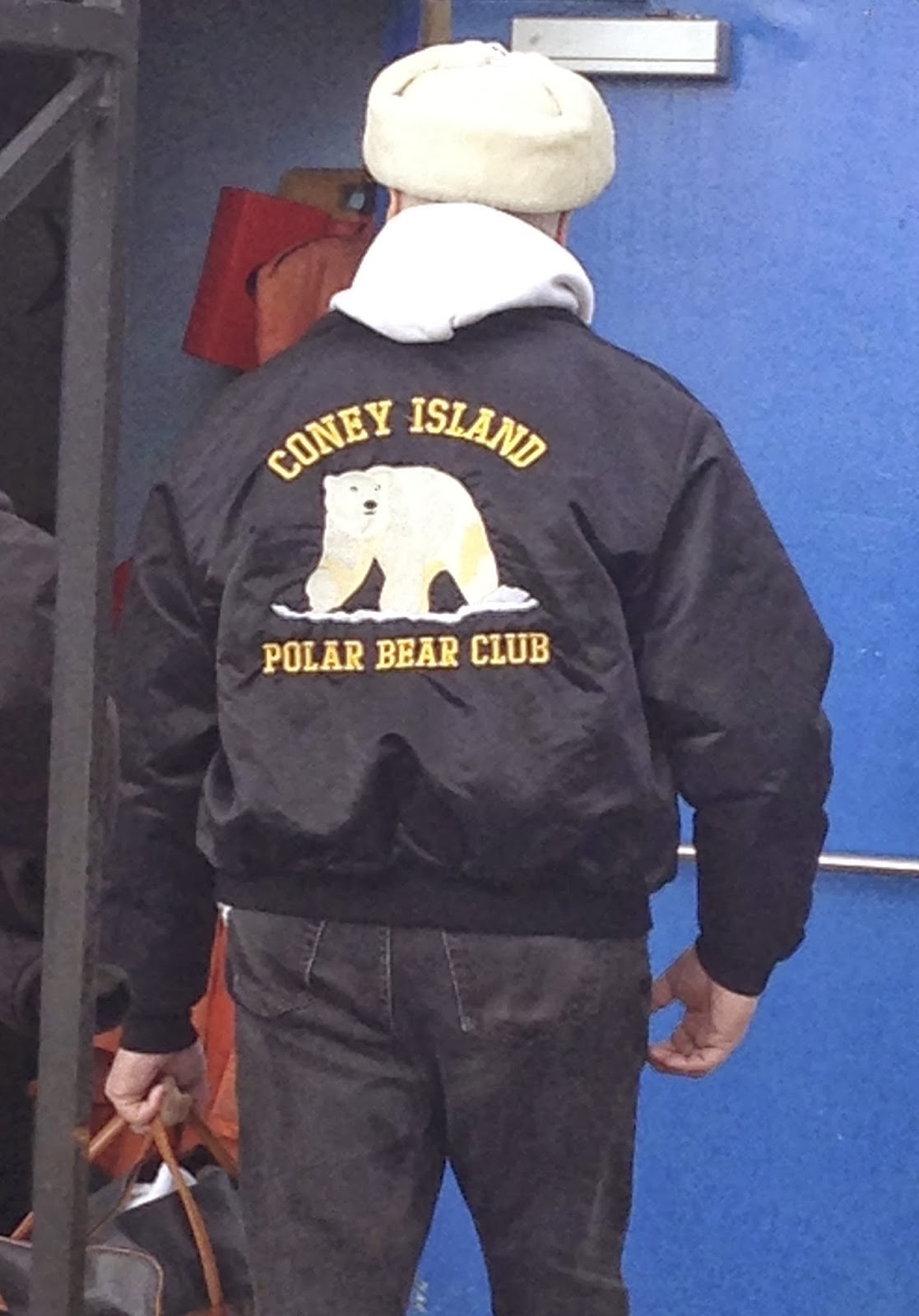 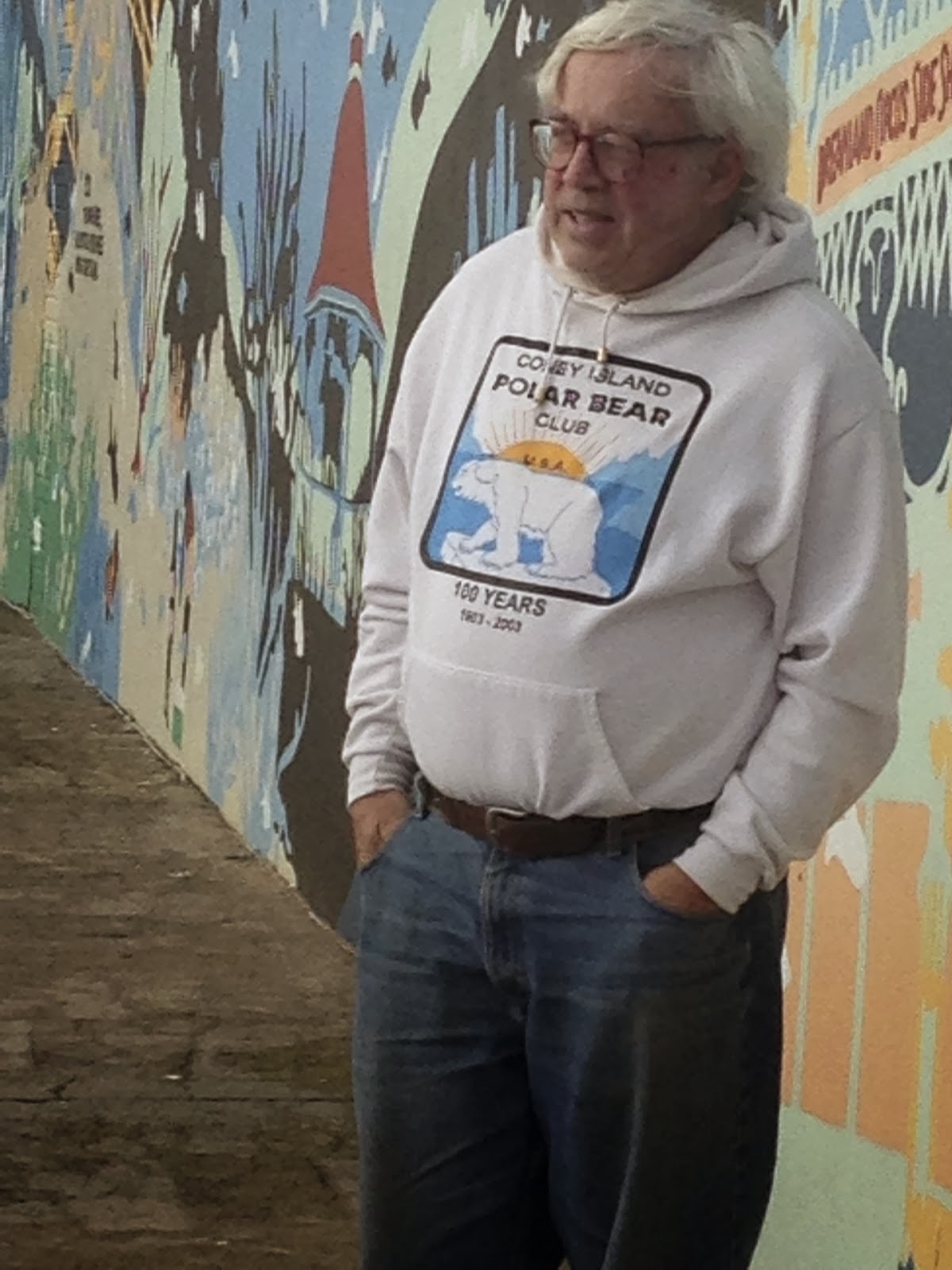 As the oldest winter bathing organization in the country, the club is predictably overrun with spectators and photographers, and the Polar Bears seem at peace with this dynamic: these are not shy New Yorkers, after all. The demographic seems to consist mostly of older men, but includes a surprising number of women, and even some children with their parents. No one seems to be vain: many bodies are well padded, and bathing suits tend toward the saggy and threadbare. All the Polar Bears, however, wear protective footwear, usually surfing booties: the toes are first to succumb to the cold. 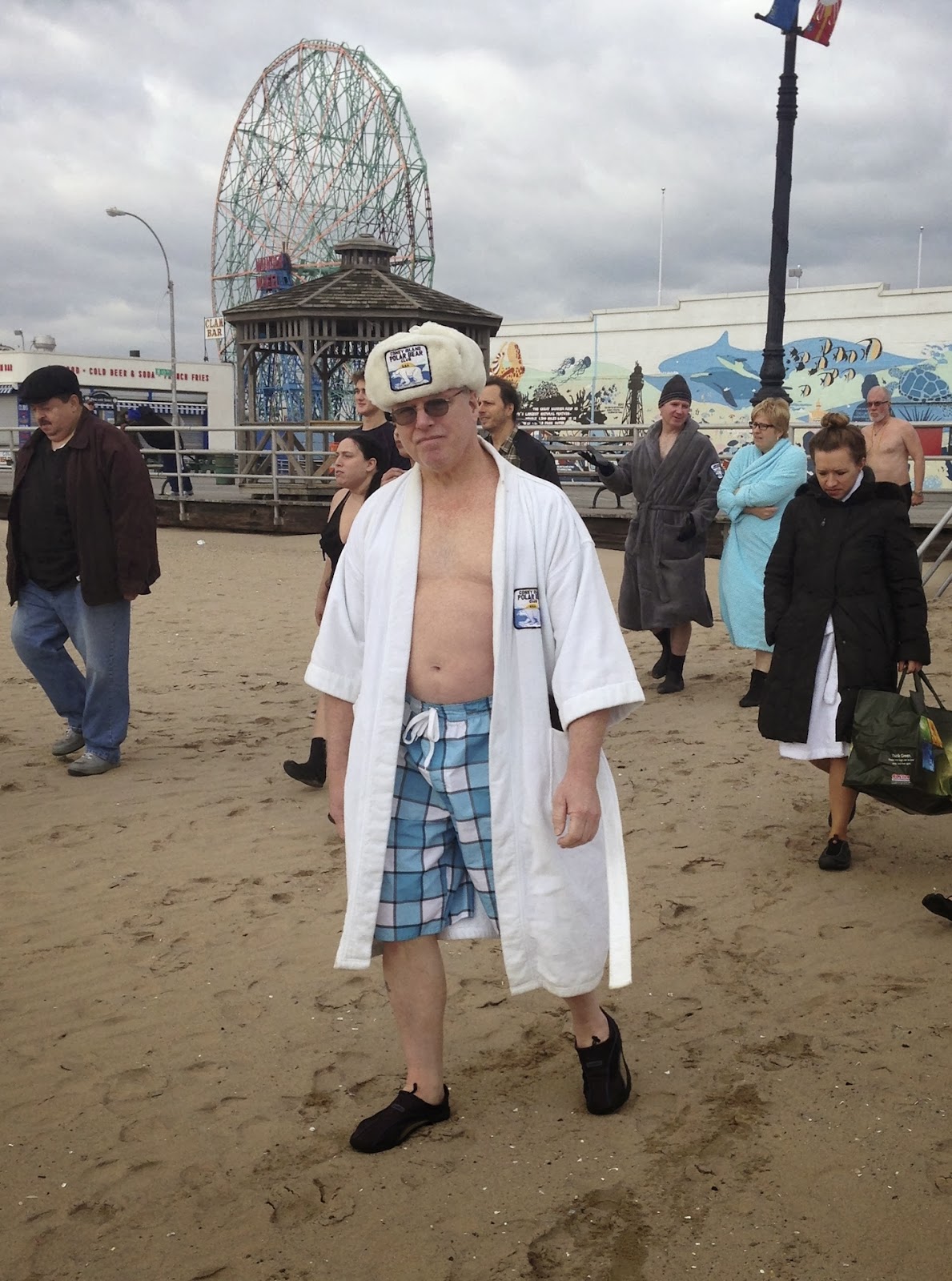 The beach today is empty save for seagulls, dog-walkers, a mother singing softly in Russian to her toddler, and a couple of wild-eyed treasure-seekers prowling the sands with metal detectors and shovels. The sky is dramatic: dark clouds pierced by brief shards of sun. You’d expect the Polar Bears to rush into the water during these breaks of warmth, but no, they are cooler than this. The president of the club, Dennis Thomas, a.k.a. “Mr. Freeze,” told me: “In the thirty years I have been swimming with the club, we have never canceled a swim due to the weather.” 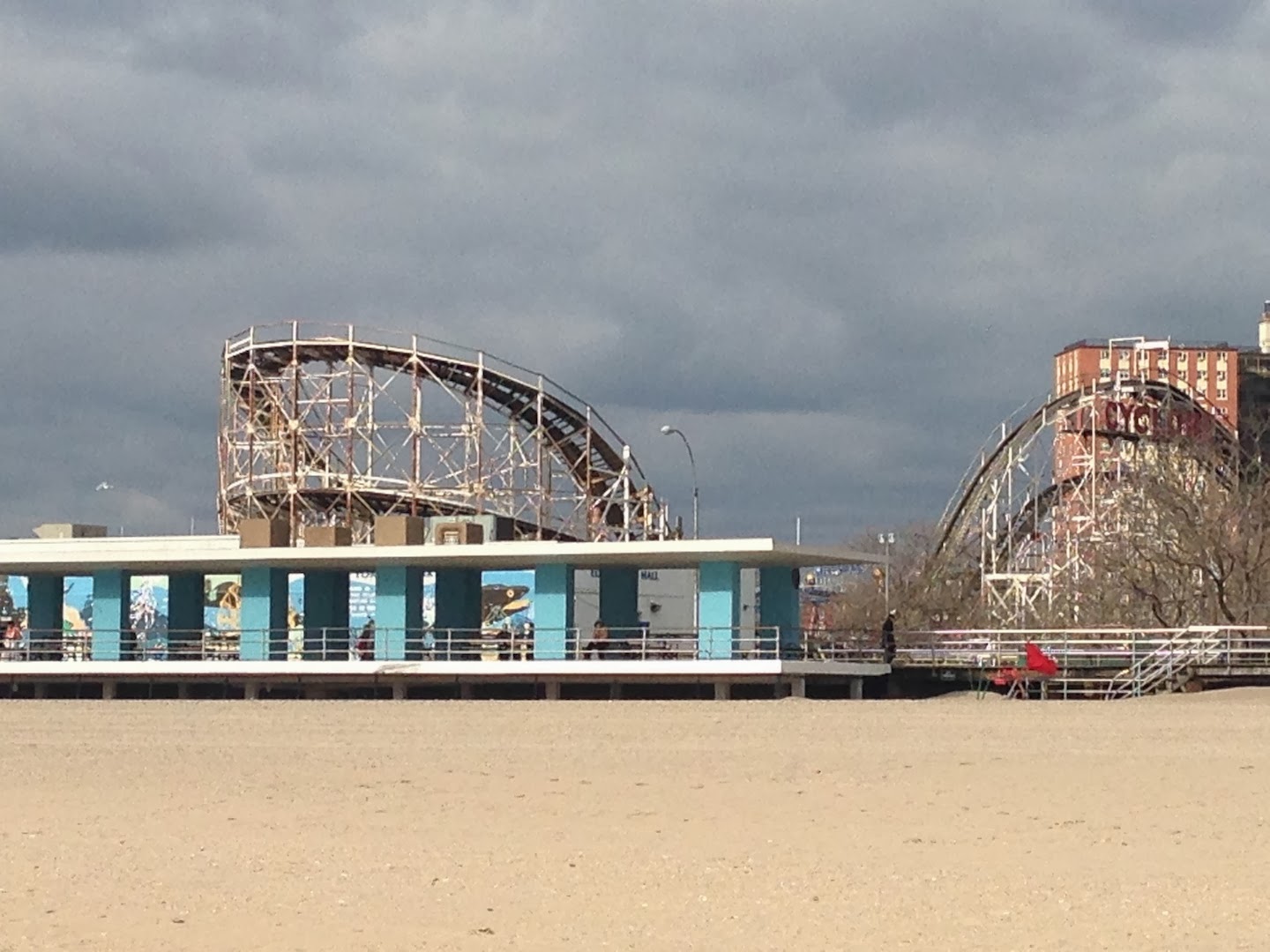 Inside the locker room a cheer erupts, like a middle-school soccer team rallying before a game, and the Polar Bears file out through the door, cross the boardwalk, and parade down the windswept sand. They slap their bare torsos, hike up their string bikinis, engage in light calisthenics, and chat with friends as passersby in down coats and fur hats gape in awe and admiration from the boardwalk. Someone inevitably asks one Polar Bear how long she has been at this. “Years. I don’t know, years!” she says, with a characteristic blend of gruffness and affability. “You ever been in? Well, it’s a thrill.” 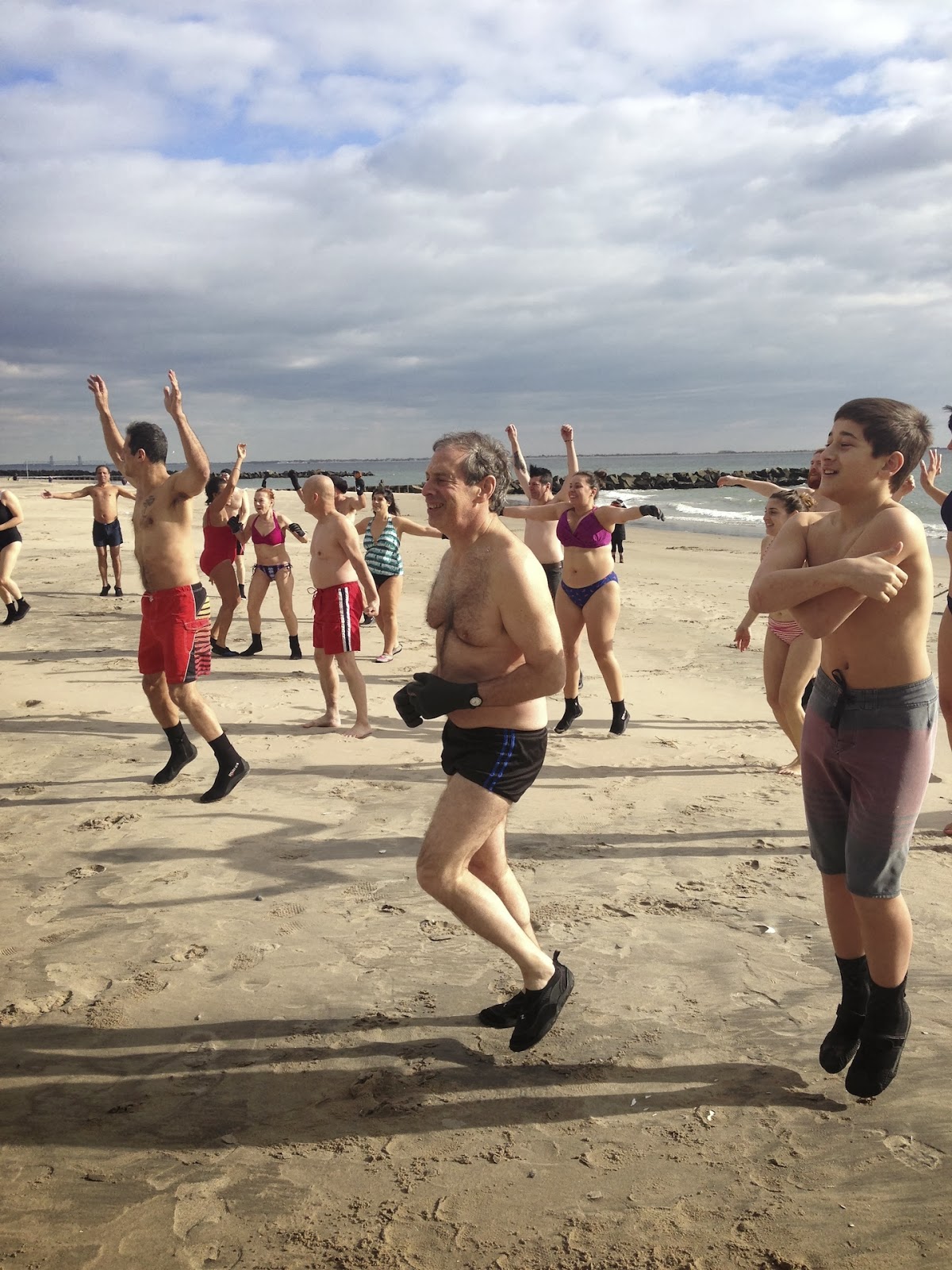 At the water’s edge, someone barks, “Okay, circle up!” and leads the group in jumping jacks and a ritual chant. Then the eighty or so Polar Bears storm into the waves, whooping and yelling. I hear no complaints of the cold and see no signs of fear, only pure exuberance. Once they’re all in the water, they circle up again and, holding hands, paddle around in a circle, tossing a ball between them. “Yaaaaaah!” “Whooo-whoooo!” they cry. No one seems eager to get out. 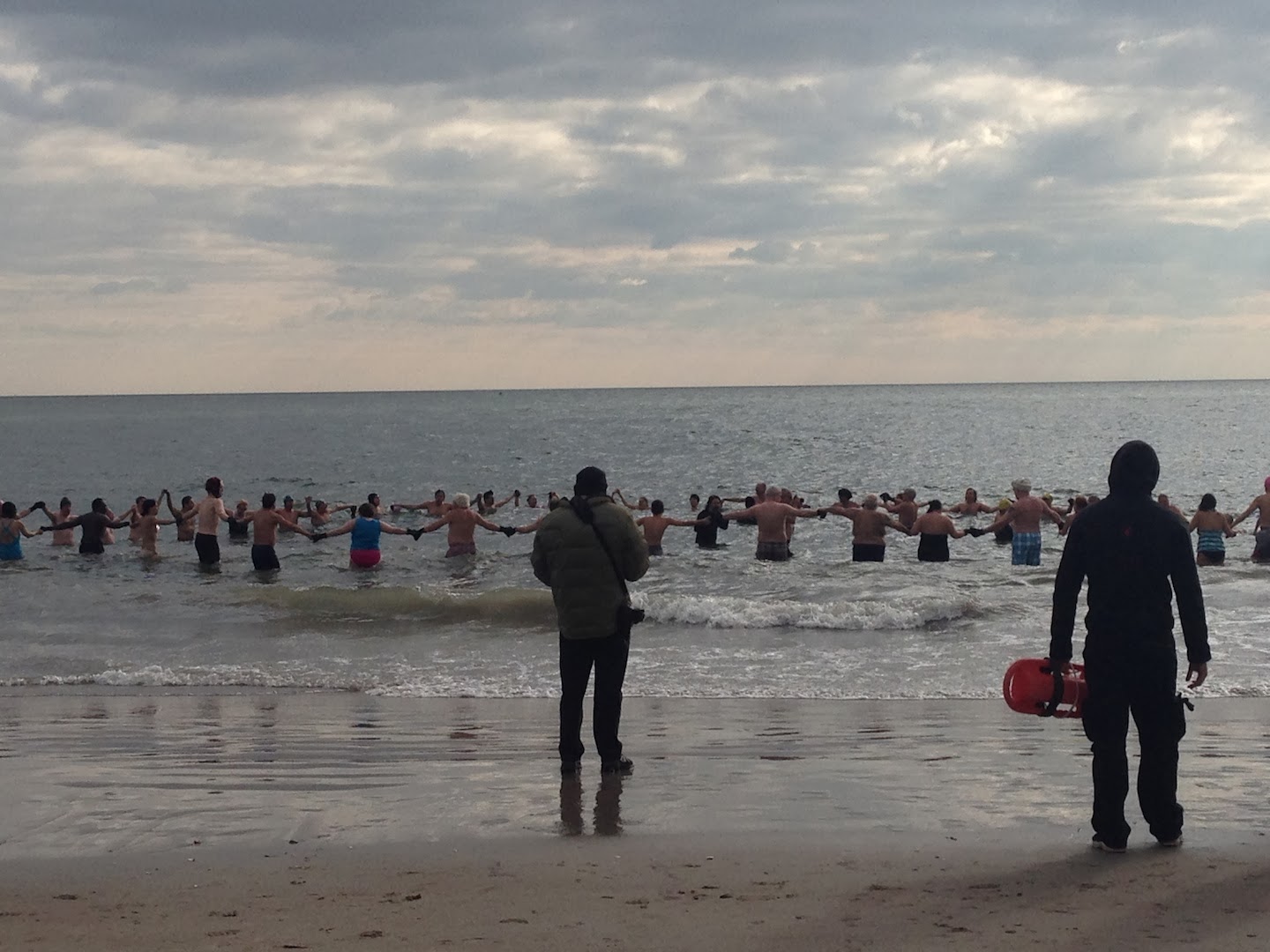 Finally the Polar Bears emerge from the water. Two old men with sagging bellies hold hands. “Your legs all right?” one asks the other. “They’re workin’! They’re workin’!” his friend insists. 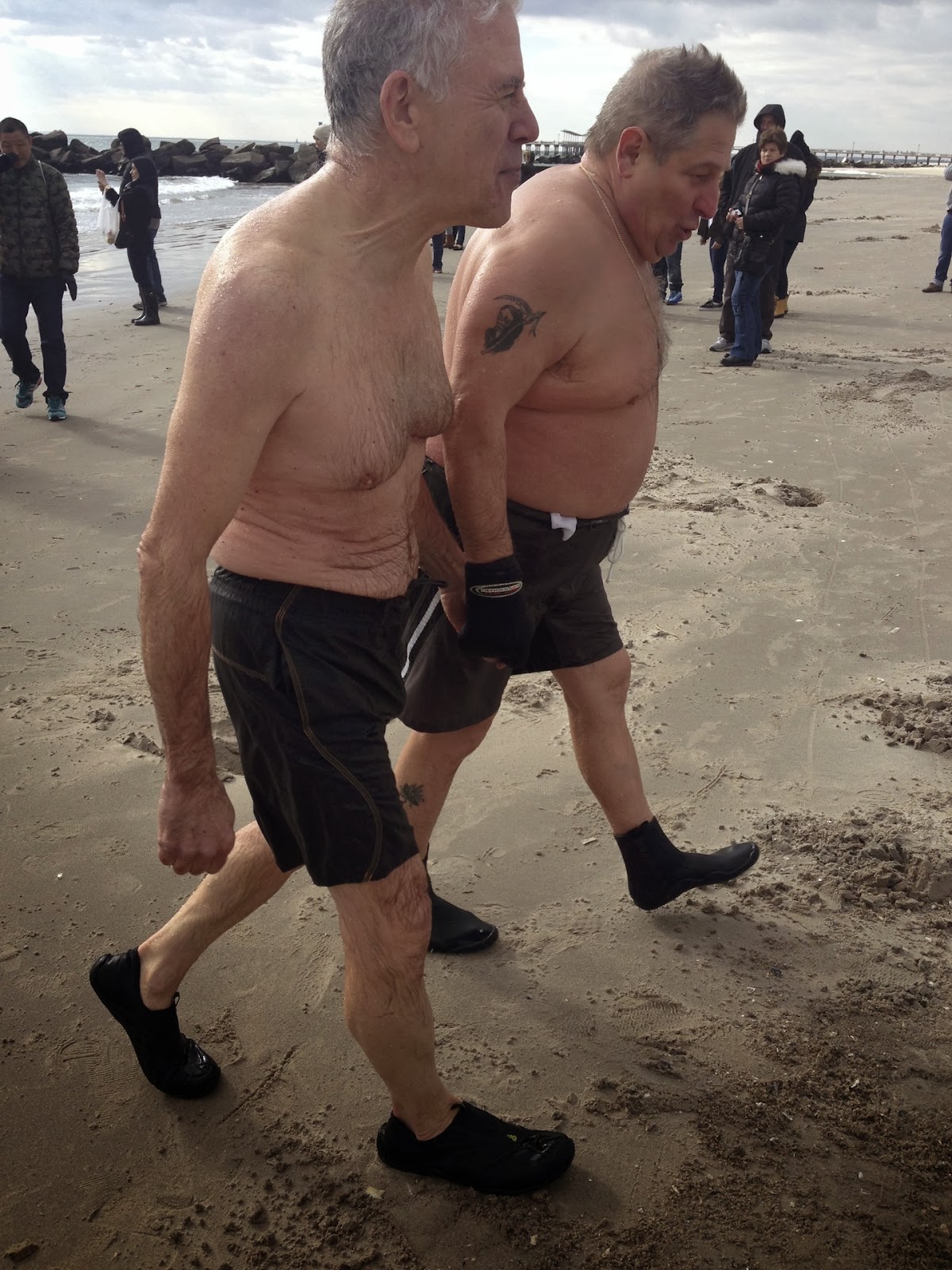 I decide to wade in. I remove my snow boots and wool socks and tiptoe to the water’s edge across the glacier-like sand. A wave laps toward me, washing over my toes and instantly numbing them. My calves begin to quiver as I await the next wave, and this time I’m ready. It is exhilarating—already I feel refreshed, like the day has begun again. I realize I’m a long way from becoming a club member: you have to complete twelve swims on one season to gain admittance to the club. The youngest member ever to join was nine years old. 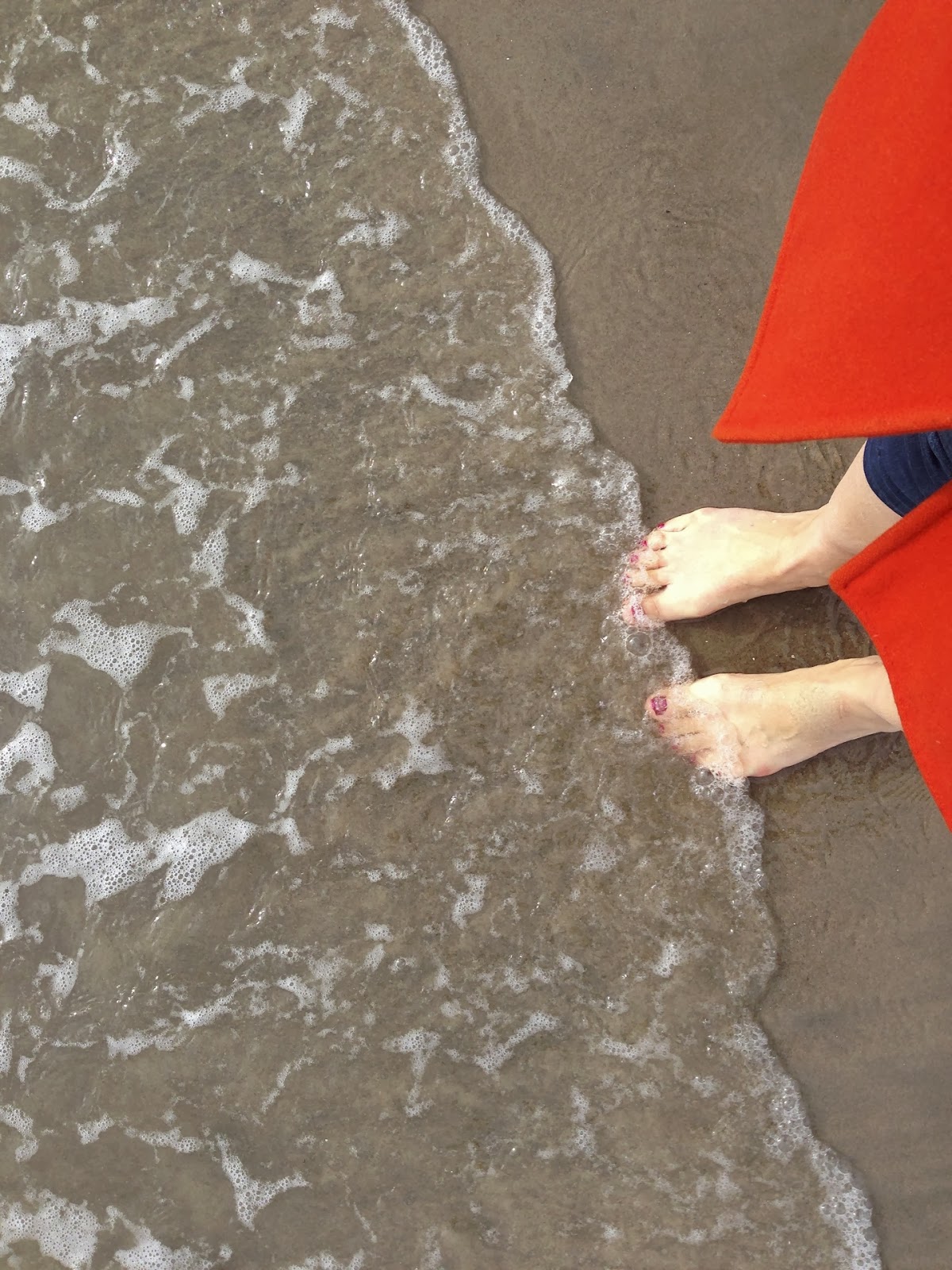 “I’m awake now!” one woman cries, raising her arms to the sky.
“My dingo shrunk in the water today, eh?” one old man remarks, chuckling, as he reaches for his robe.

A woman next to me is standing in the sand, still in just her suit, seemingly impervious to the cold as she gazes toward the winter ocean. Her legs look pink. I ask her how it went today. “You’re expecting it to be cold, you know? So it’s okay. It gets the endorphins going, clears the system. We get so overheated inside in the winter in the city.” She wiggles her toes in her surf booties. “Okay, I’m gonna go get my robe now.” 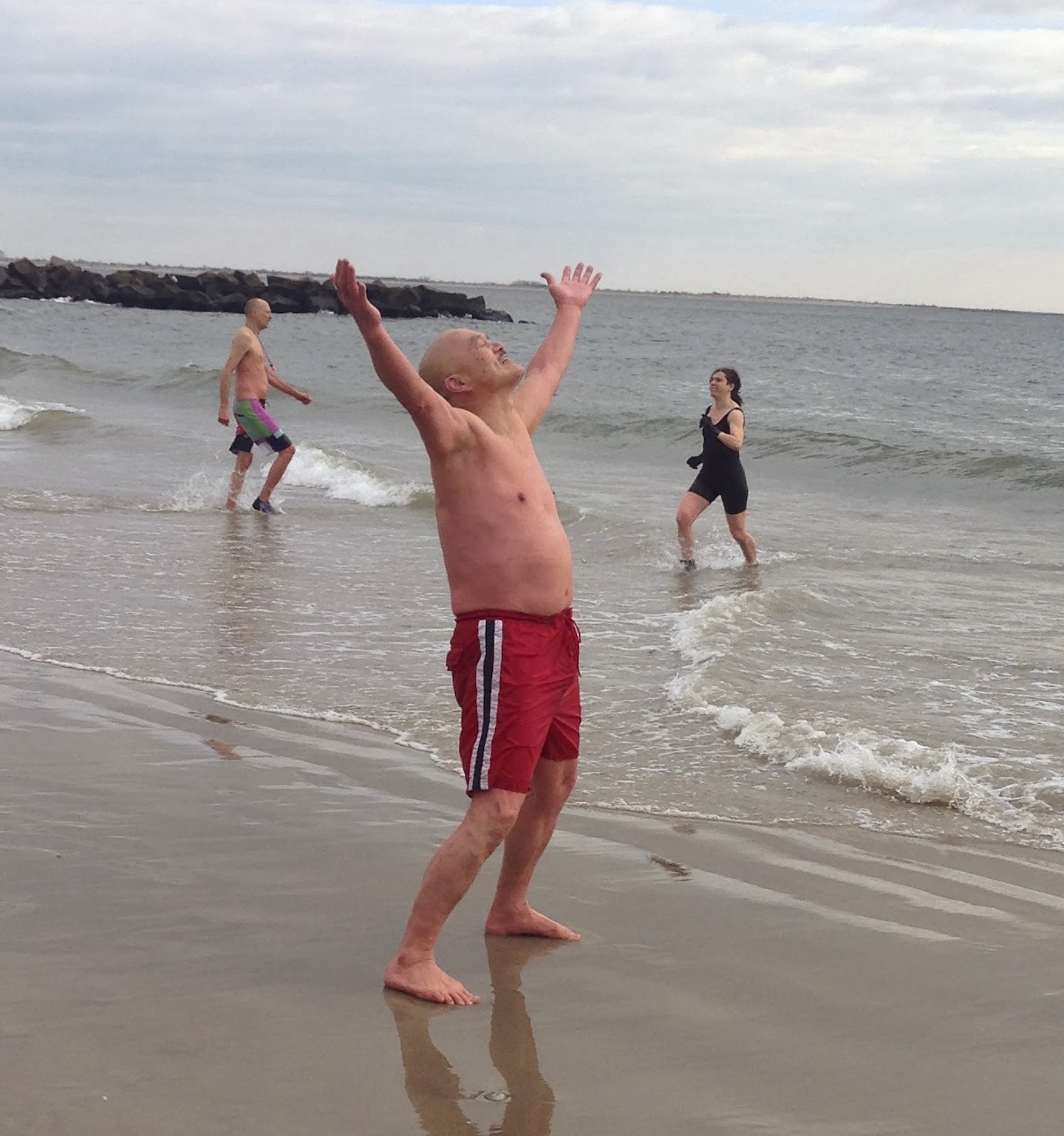 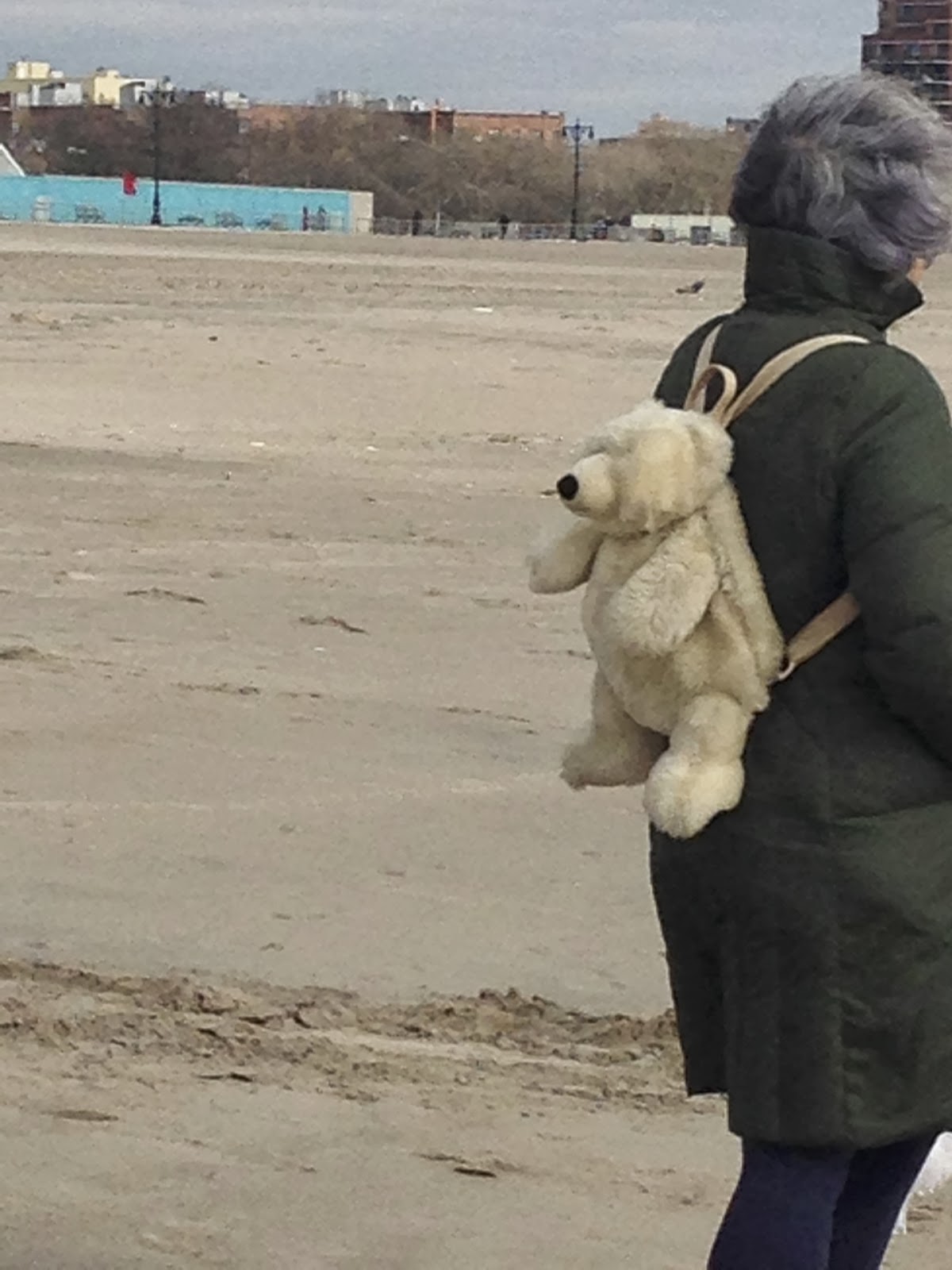