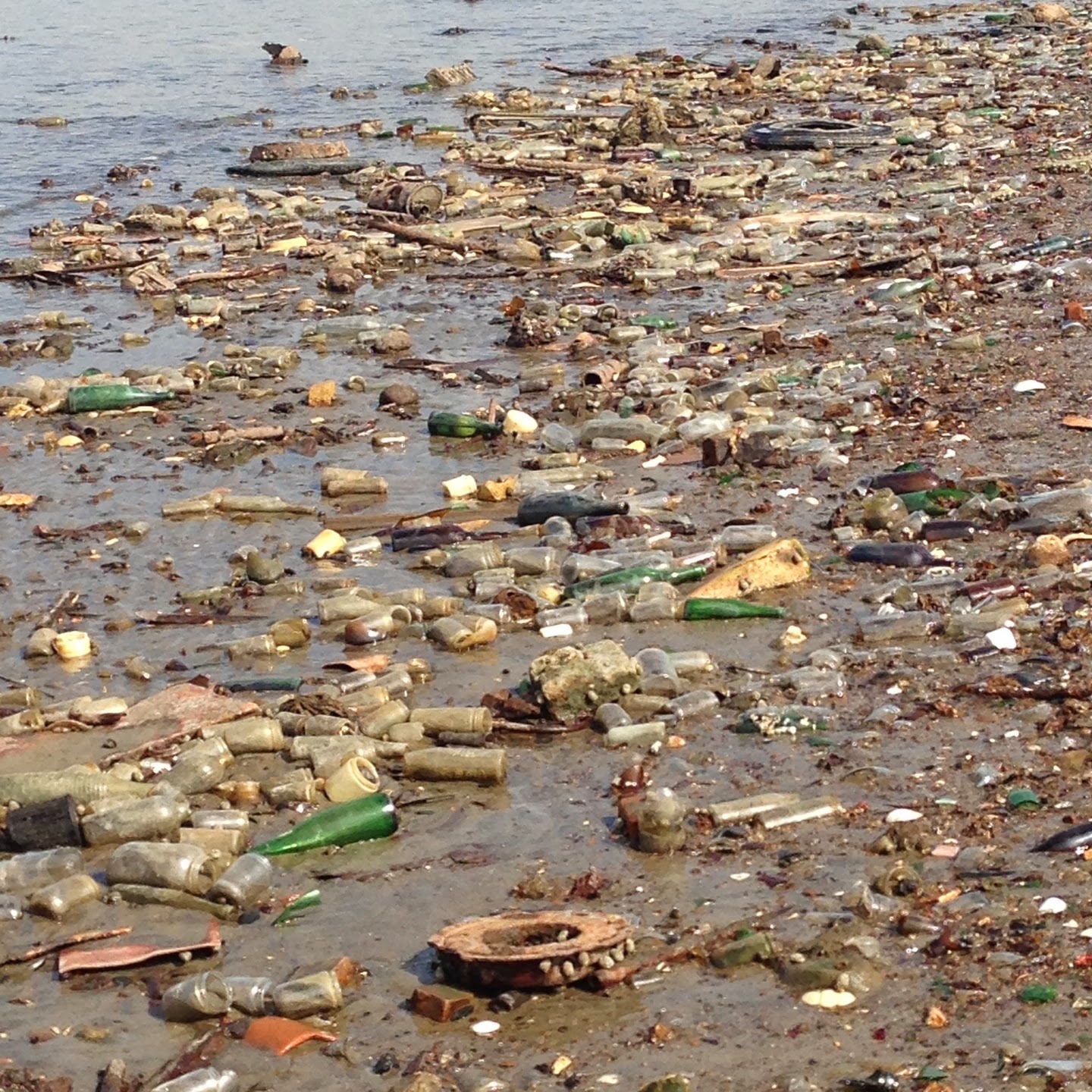 The most common treasures to be found at Bottle Beach, off Brooklyn’s Dead Horse Bay, include shoe soles, ceramic light-bulb fixtures, perfume bottles, chunks of horse bones, pieces of porcelain toilets, shards of china plates, horseshoe crab carcasses, tangled pantyhose, and glass citrus reamers. The treasures—though some might call them trash—form mosaics in the sand all along the shore.

Bottle Beach is an echo chamber of the past; every step offers a glimpse into the city—as evinced through its refuse—at the first half of the twentieth century. During that time, the surrounding marshland was a tiny, smelly, isolated island called Barren Island, where much of the city’s garbage and dead animals were dumped and rendered. The area was inhabited by families of scavengers—many immigrants—who eked out a living from the garbage. Eventually a bridge of landfill was constructed to connect Barren Island to mainland Brooklyn, and, in 1936, its residents were evicted. In the 1950s, the cap on the landfill burst, and decades of perfectly intact garbage surfaced and leaked onto the beach and into the bay, where they await today’s less-desperate scavengers. As if in testament to the beach’s ghosts, on a hill at the edge of the beach someone has erected an effigy: a scrap of red cloth and a garbage bag tied to a cross. 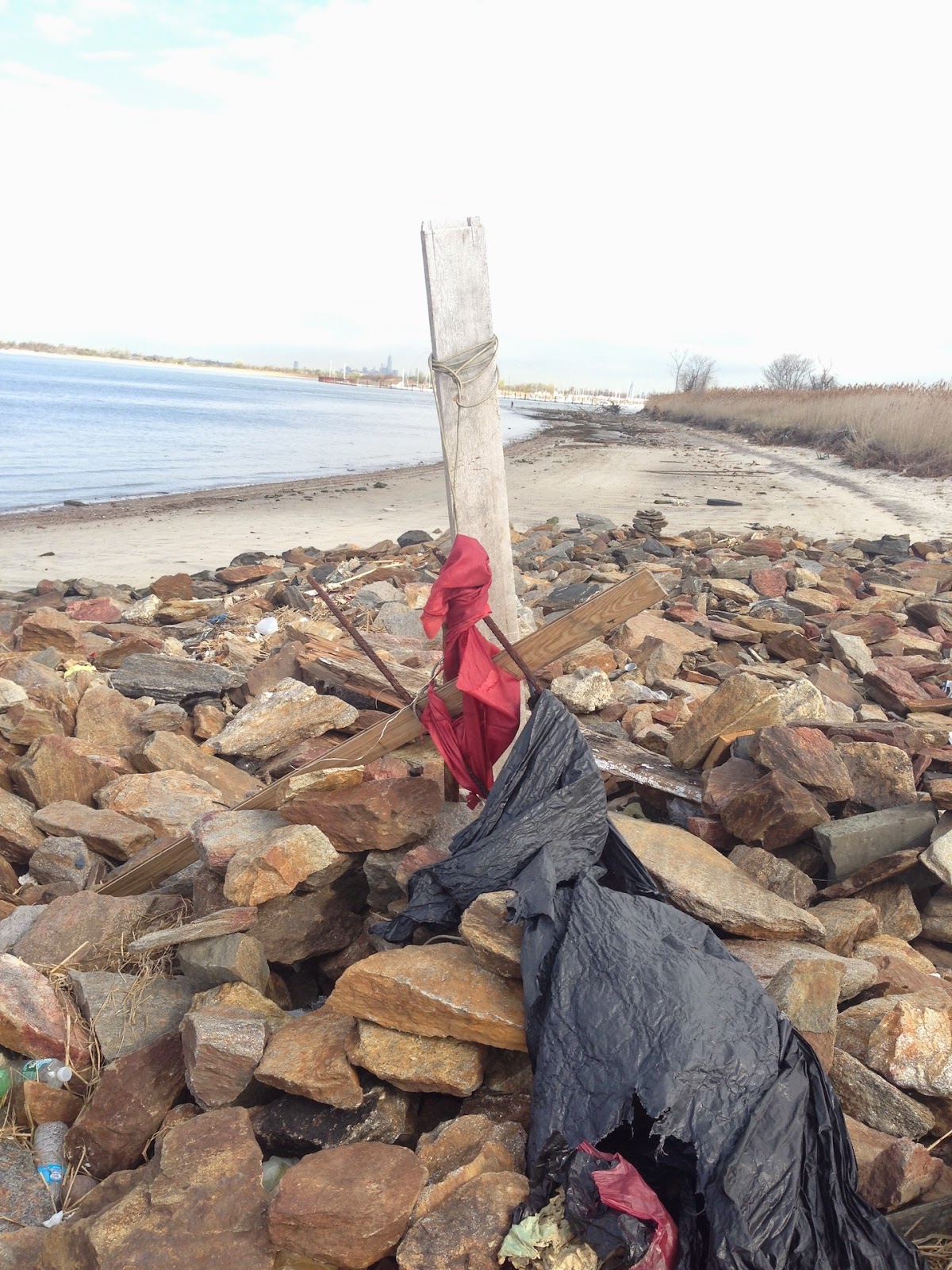 Specters of the horse-rendering plant once located there lurk in the rubble. 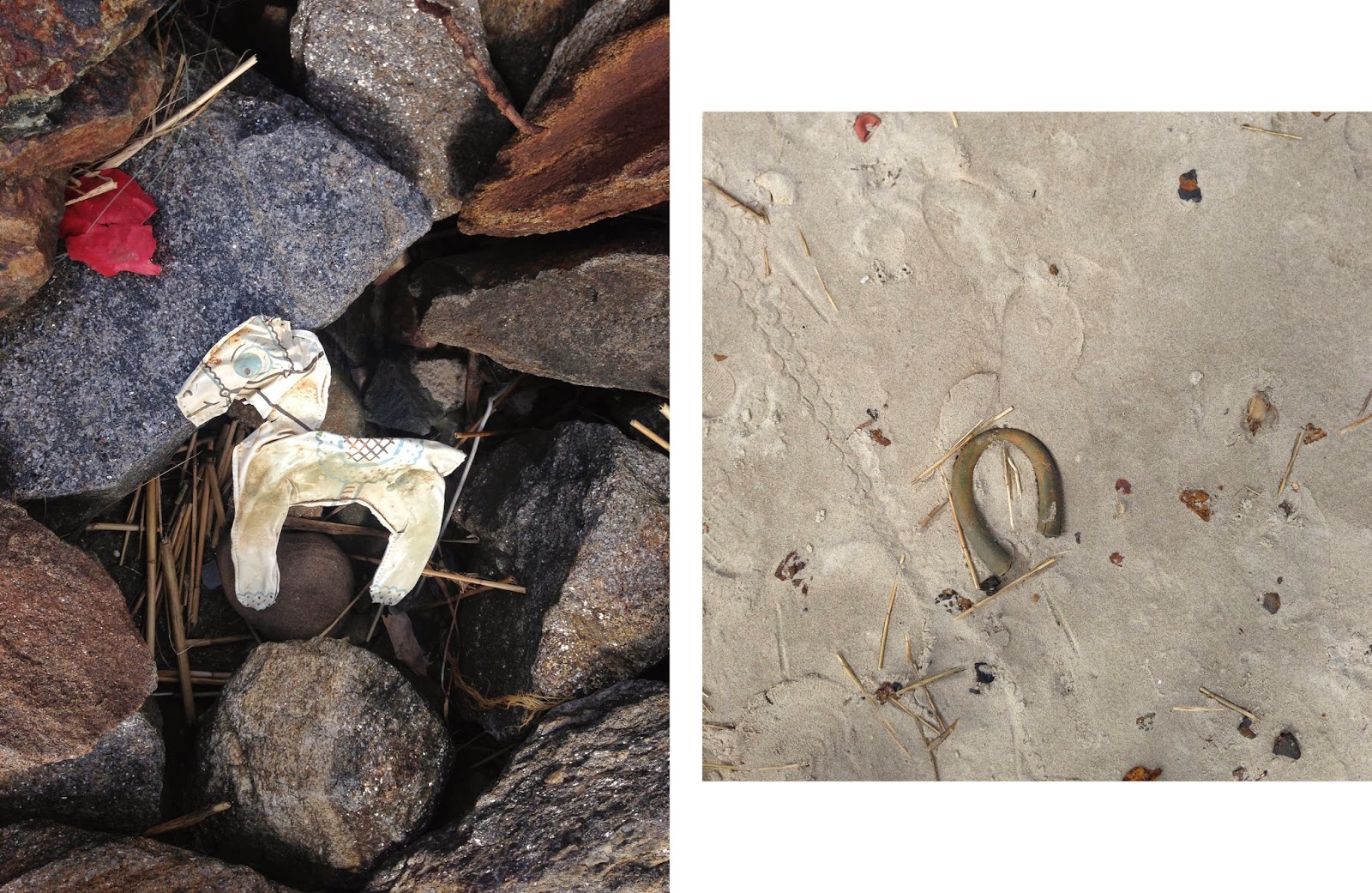 Leather shoe soles trace paths across the beach, followed by the boot-prints of urban foragers, who come here to collect antique bottles, many still unbroken.

The waves have washed sand and plants into some of the bottles, creating ready-made terrariums—or hourglasses? 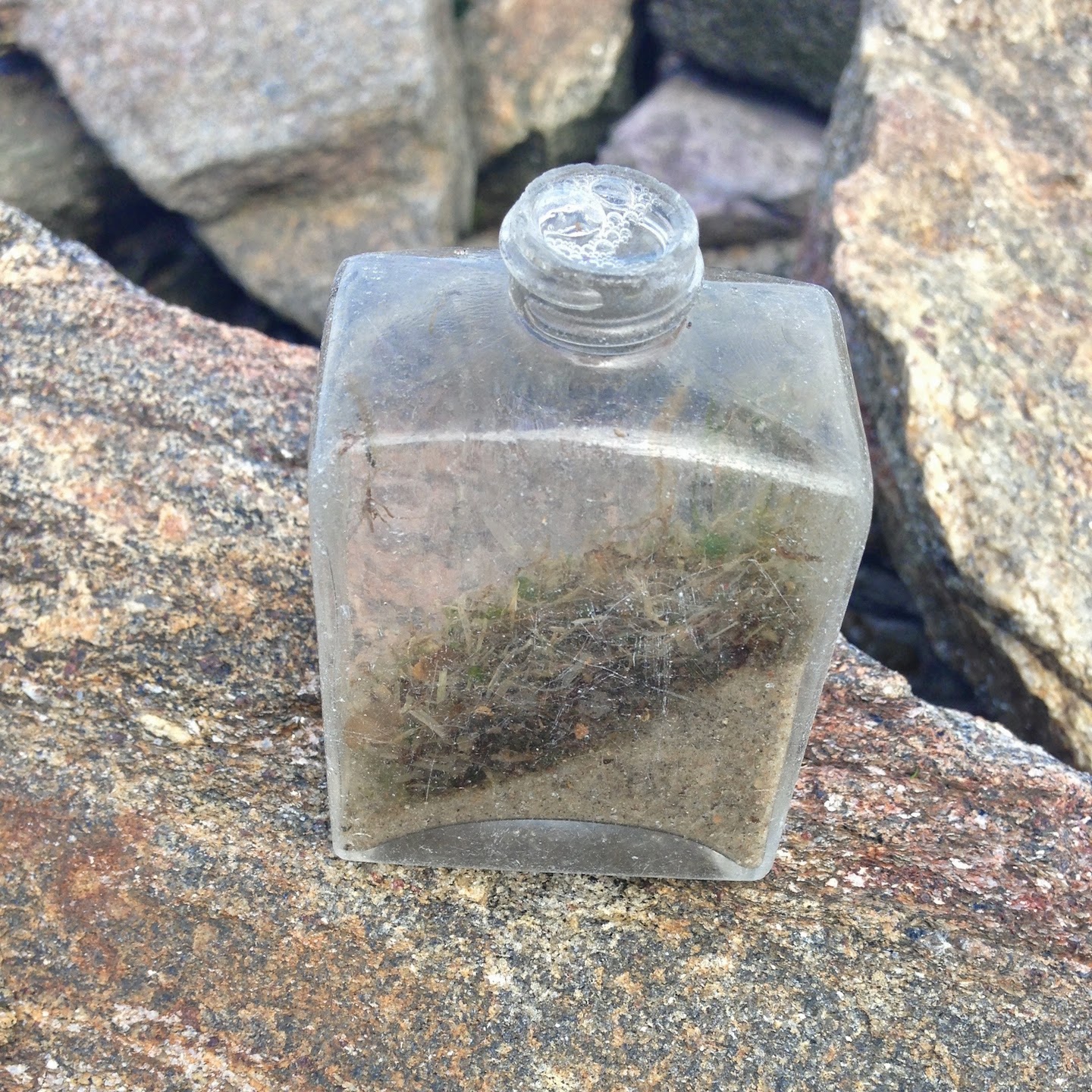 As they have for the past century, the waves lapping at the shore tumble hollow glass bottles against each other with a soothing clacking sound; the trash itself forms suggestive shapes if you take the time to look closely. 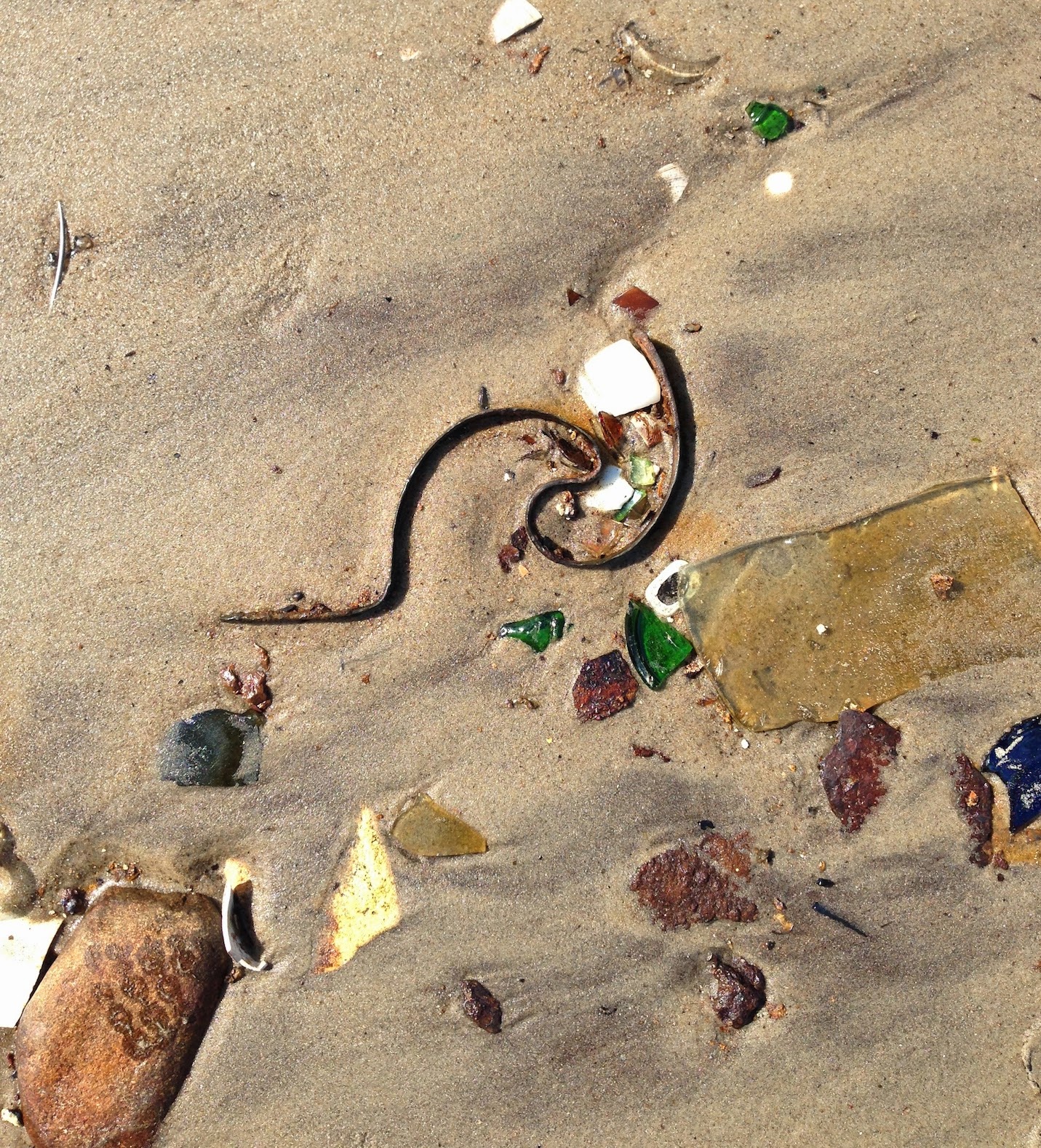 On the day I visited, all of these apparitions might have seemed ominous if a group of ladies in designer galoshes hadn’t emerged from the trailhead and stopped to pose for photos by one of the stranded boats, saluting nautical-style. I watched them wading in the shallows, picking up shards of pottery between their fingertips and comparing findings. 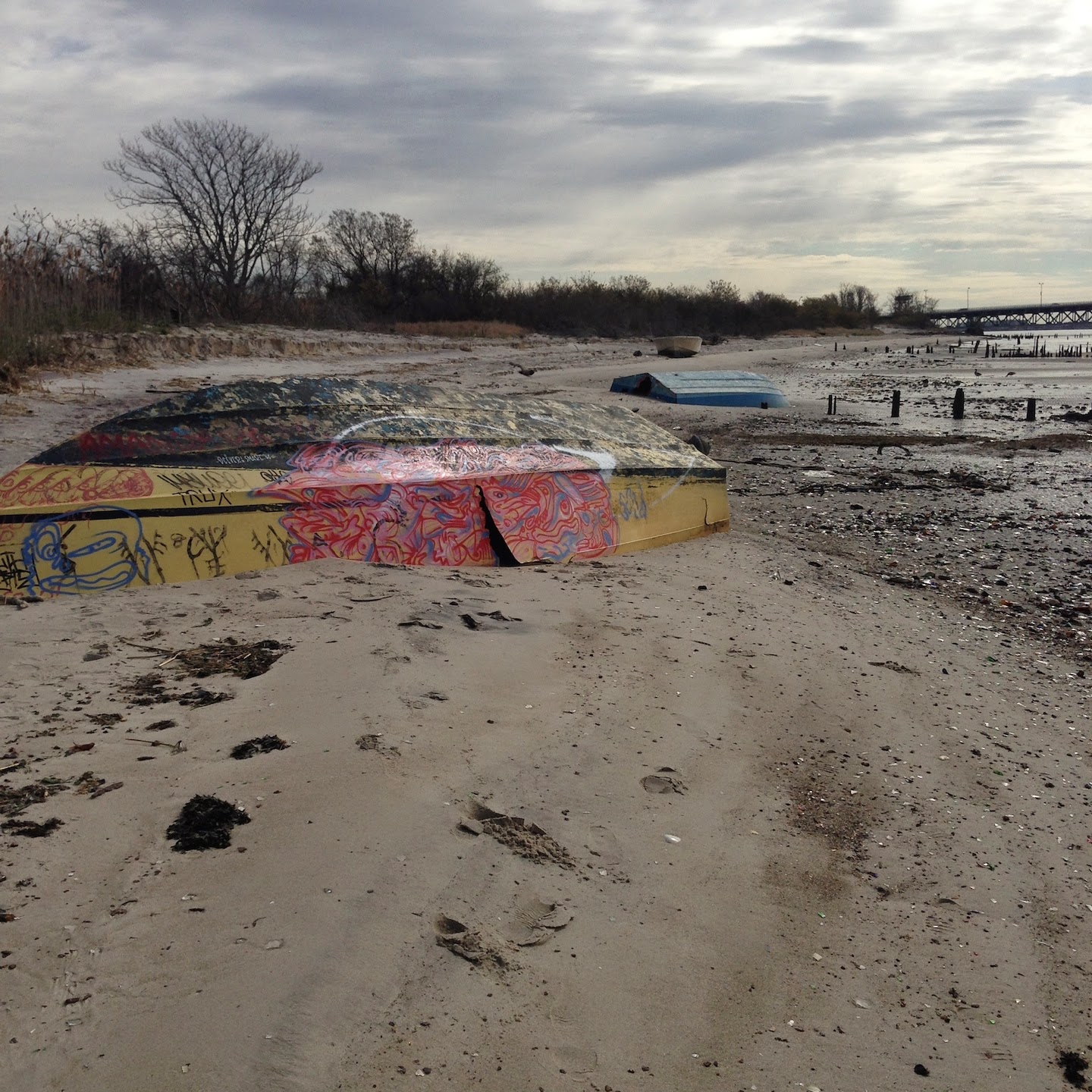 A more optimistic view can be found over the hill on the right side of the beach and around the bend. On this stretch, artistically minded visitors have created sculptures from their findings. Light fixtures and toilet parts festoon an uprooted tree. 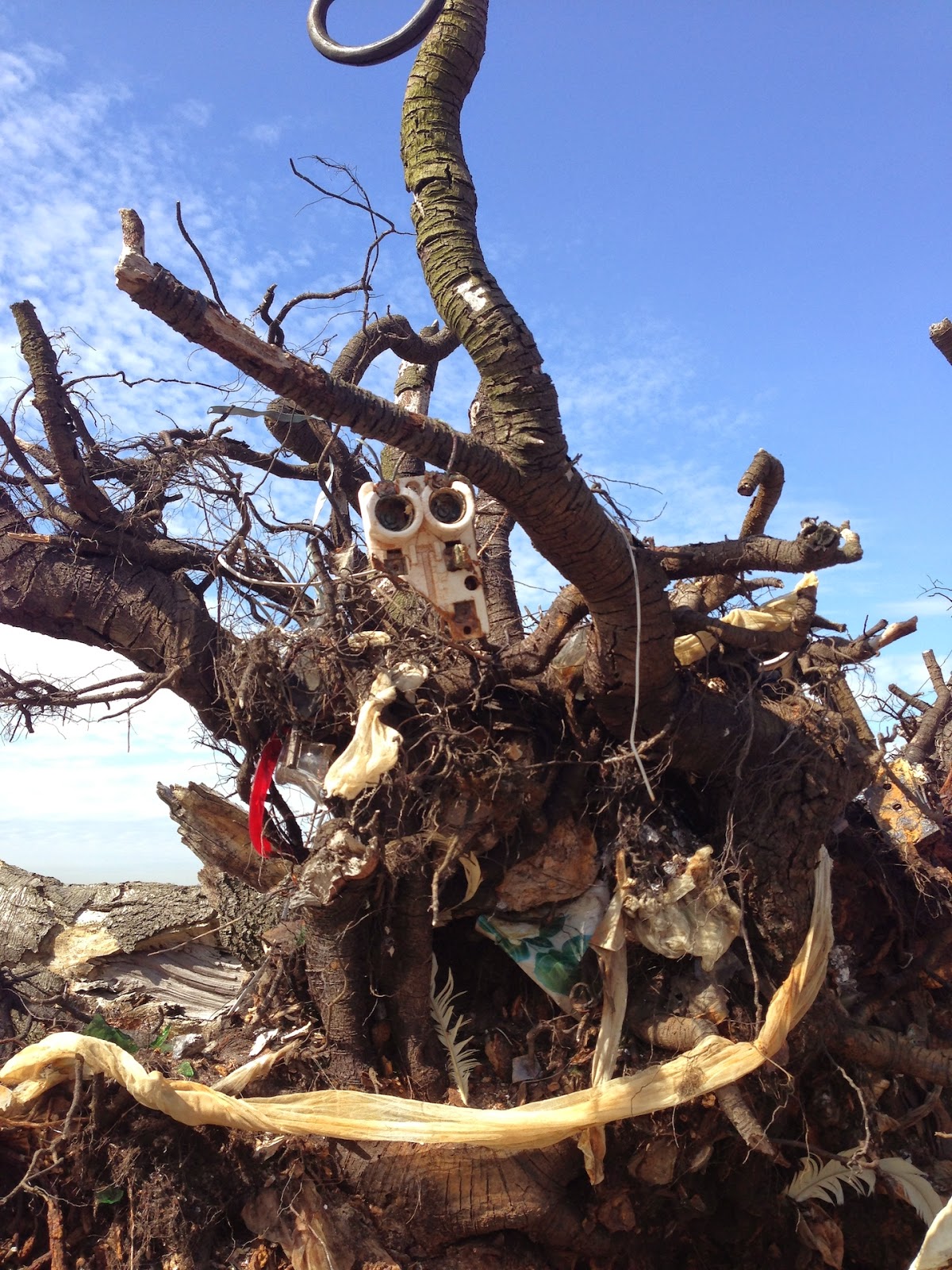 On another tree, glass bottles of all colors, many filled with water, dangle from the branches, catching the light and chiming gently in the wind. 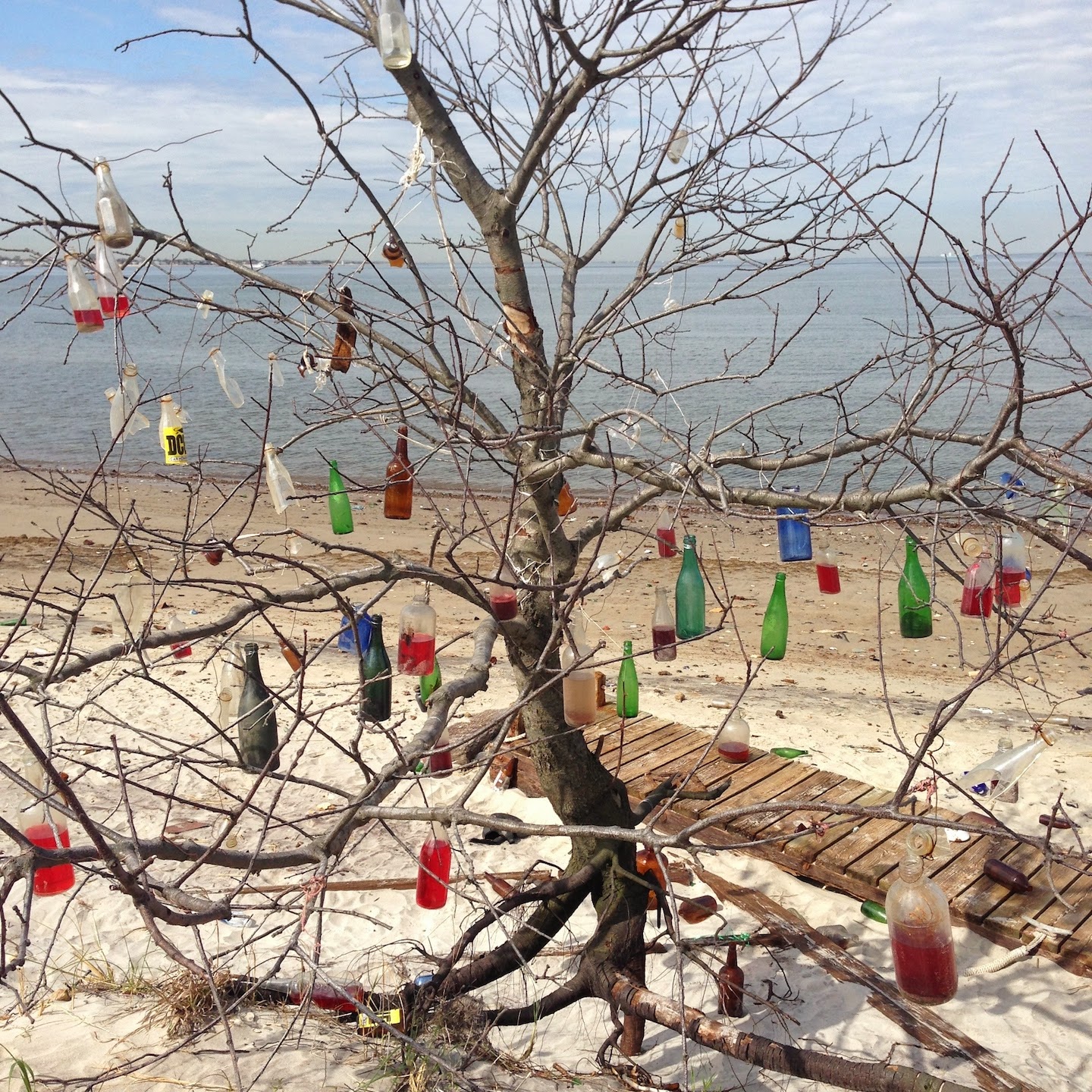 DIRECTIONS TO BOTTLE BEACH: Take Flatbush Avenue all the way down to Floyd Bennett Field. Just before you get to the toll plaza for the Marine Parkway Bridge (don’t go over it!), you will see the parking lot for Floyd Bennett Field on your left; it’s not marked but is obvious. Park in the lot (for free), then cross Flatbush Avenue to the grassy side. If you poke around, you will find the trailhead right there. It’s a well-trodden trail, probably about half a mile to the beach.
Share on facebook
Facebook
Share on twitter
Twitter
Share on linkedin
LinkedIn