Can a New App Help You Write Like a Romantic Poet? 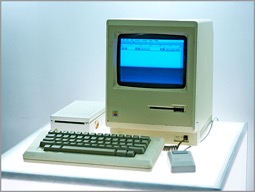 MANKOFF
Why?
Why do some people surf? Certainly not just to get from the water to the beach. Why fall down ten times in the process? Because you want to ride the wave! It’s fun to see if you can surf this chaos of information that is coming at us from all directions, all the time.

HOLMAN
Predictive Writer may be great for writing a meta-Seinfeld, but now Zeitlin wants to challenge the app to a poetry writing episode—a Romantic poem, to be specific—and wants me to be the first poet in history to take a plunge into the ice-cold computer waters and generate a poem with this app. I mean, after all, Seinfeld is famous for being about Nothing, right? Predictive Writer is right there, pure vocabulary. Or you can spice it up by adding some octopus-pancake-recipe language from a different part of the app.

HOLMAN
I’ve never been one to shy away from inspiration. Poems make imagination real (don’t forget that).

MANKOFF
Hey, other Bob (to whom I’m the other Bob): you don’t have it quite right. The process of creating sentences from a specific source with Predictive Writer—whether the source is a poem or anything else—is anything but random. They are the most likely next words from that vocabulary, given the ones you selected. We’re still in the process of developing the app to make it more intelligent in terms of knowing which parts of speech are permitted, as well as layering on more rules of syntax. But the more intelligent it becomes, the more intelligence it will require from humans to turn linguistic anarchy into poetry.

HOLMAN
But, other-other Bob, to come up with anything resembling a Romantic poem, I would need to write not just according to syntax, but also rhyme and meter. So when I found myself stymied by Predictive Writer’s limitations, I resorted to old faithful print rhyming dictionaries (though I could have used one of the many rhyming sites on the Net).

ZEITLIN
I shared this essay with the writer Caitlin Van Dusen for her comments, and when she got back to me and I started to reply on my iPhone, the predictive writer on the phone suggested that I write “Thanks for the feedback” or “Awesome, thanks!” How long before the phones can predict our questions as well as our responses?

HOLMAN
My writing was well under way—I was creating Romantic poems with the vocabulary of Shelley and Keats—when Steve lay a content demand on me: your Romantic poem, he opined, wants to mirror the consciousness shift you are using and talking about. From pen and paper to the digital world? Whaaaaa?!!

That would have to be Coleridge. But this time, I dictated the poem using Predictive Writer the way I used to use the books of Ashbery—as in: now I need an Ashbery word, now a Hopkins word (“dapple-dawn-drawn”). So when I wanted predictive, I took it; otherwise, folks, the vocabulary is that of the Coleridge I know, not the limited choices available on the current early iteration of the app.
I ended up with twelve lines. I figured if I was this close to a sonnet, why not just close it off with a couplet? But for the final two lines, I’d let Predictive Writer pick the words.
THE ROMANTICS VIA BOTNIK ASSISTED BY HOLMAN 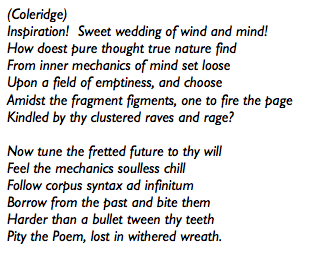 ZEITLIN
So Bob did “Bobnik” the poem—and whether the results sound more like Coleridge than Holman, you decide.

3 thoughts on “Botnik versus the Romantics”